Su-24 will equip the sighting and navigation complex Hephaestus

22 May 2013
99
At the Shagol airbase, located in the Chelyabinsk region in the Central Military District, the work on installing Su-24М specialized computing subsystems SVP-24 Gefest on the front bombers is being completed, the press service of the Central Military District reports. It is reported that until the end of this year, all district bombers will be equipped with SVP-24. This subsystem combines instruments and means of aiming, navigation and control. The use of the complex "Gefest" seriously increases the ability of crews of bombers to search for and hit the target, aiming and delivering air strikes, including when visibility is limited in adverse weather conditions.


The SVP-24 Hephaestus system expands the range of tactics available to pilots when searching for a target, reaching a target, aiming and delivering air strikes. The use of a new sighting and navigation system allows bombing from a free maneuver, without entering the zone of destruction of the means of enemy object defense. According to the experts of the 2 th command of the Air Force and Air Defense, during the combat use of SVP-24, Gefest confirmed all the declared parameters - more than 3 times it was possible to increase the accuracy of Su-24М air strikes, as well as the reliability of the sighting and navigation complex. Significantly managed to increase the timing of daily combat attack.

Su-24 currently continues to be the basis of the front-line bomber aviation countries. Su-24 or T-6 product (according to NATO codification Fencer - fencer) is a Soviet / Russian front-line bomber with a variable sweep wing. The aircraft is designed to carry out missile and bomb strikes in difficult and simple weather conditions, at night and in the afternoon, including at low altitudes with targeted destruction of targets both on land and at sea. 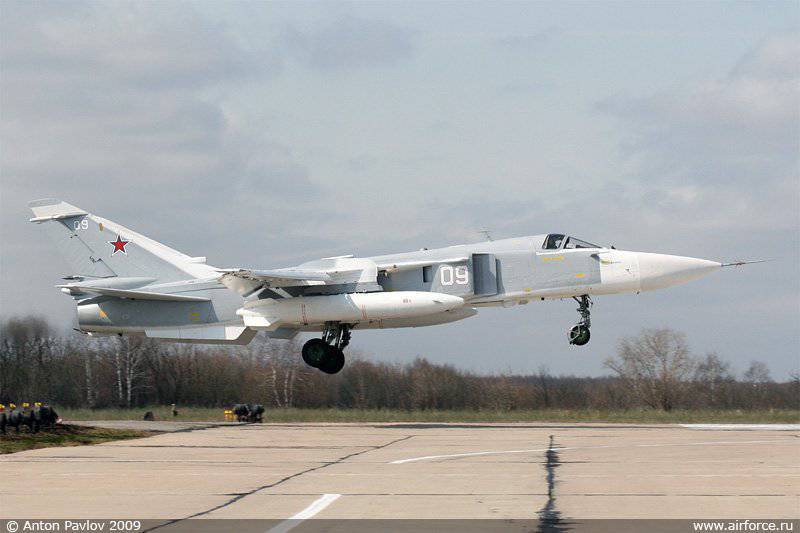 As of 2011 year, the average age of the Russian Su-24 bombers that were in service with the Air Force was 25-27 years. Initially, around 60-70% of the fleet of these aircraft was planned to be replaced by modern Su-34, and the remaining aircraft to be upgraded to Su-24М2. However, it was decided to abandon the M2 variant. As of 2012 year, the Russian Air Force was armed with the X-NUMX bomber Su-124M. The regiment Su-24M, stationed at Shagol airbase, will be equipped with the SVS-24 "Hephaestus" system until the end of 24.

It is known that in the 2009 year after the final evaluation of the combat use of the upgraded versions of the Su-24M during the Five-Day War, the Russian Defense Ministry decided to abandon the further modernization of the existing Su-24М front bombers according to the Su-24М2 version proposed by Sukhoi (OKR "Gusar") ") And chose to upgrade the Su-24M according to the option proposed by ZAO Gefest and T.

Currently, the Su-24M aircraft upgraded under this project are in service with the 3-s military districts of the country - the Western, Central and Southern. At the same time, the Su-24M aircraft are upgraded according to the variant proposed by Gefest and T, CJSC, both in the ranks and at the aircraft repair enterprises. Over time, all existing Su-24M aircraft will receive a new sighting and navigation system SVN-24 "Hephaestus".

At the same time, it is worth noting that initially the representatives of the Russian Air Force were rather cool towards the developments of the company Hephaestus and T. But in 1999, the Algerian Air Force showed interest in this modernization program. Under the order of this country, Su-24M was tested, equipped with an incomplete complex Hephaestus SVP-24, since here the main contractor was the developer of the bomber. The results of the tests fully satisfied the African Air Force and, starting with 2001, the operation of the modified Su-24MK bombers began in Algeria. In this case, the Algerian Air Force received bombers with a new version of software, therefore, the operation of the aircraft was accompanied by representatives of the creator of the SVP-24. 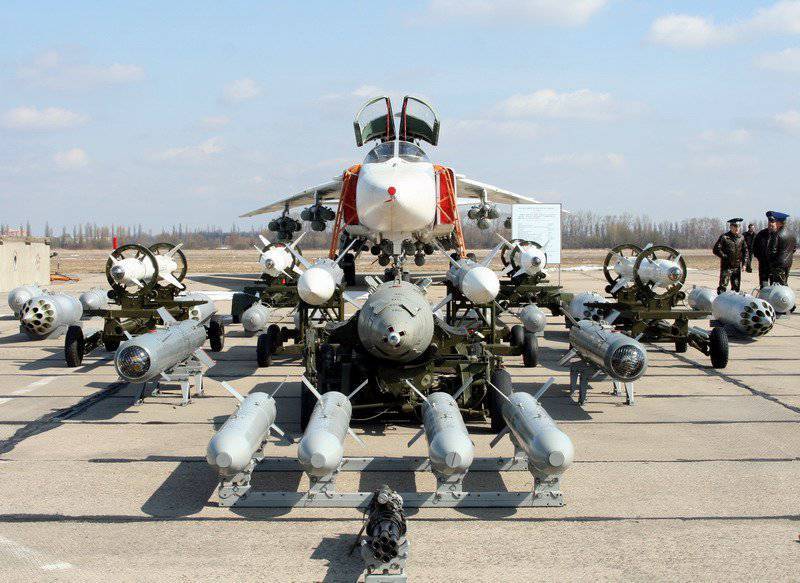 Against this background, several aircraft were also upgraded for the Russian Air Force. In 2004-2005, these machines proved to be excellent during the large military exercises of the CIS countries called “Frontier”. The Russian Air Force conducted a comprehensive analysis of the Su-24M bomber, equipped with a new sighting and navigation system, in trial operation and in the same year recommended equipment for the SVP-24 to be accepted for supply to the country's air force. but история with Su-24M "Hephaestus" was somewhat delayed. Everything was finally resolved only in October 2008, when the SVP-24 system was officially adopted by the Russian Armed Forces.

The use of the complex SVP-24 allows to reduce the cost of aviation complexes while simultaneously increasing their efficiency, which is possible due to the “unified technology”: building onboard systems on a unified element base and on a single principle. At the same time, during the modernization of the Su-24M, the appearance of the car and the equipment of the cockpit does not change. Replace only subject sighting and navigation complex. Moreover, the installation of new units, which have a smaller dimension, is carried out in the same seats and connectors, which allows for the refinement of the bombers directly in the front-line units by technical and operational services.

Installation on the aircraft of the new complex SVP-24 can significantly improve the accuracy of bombing land targets, even in fairly difficult weather conditions. This system is specially created for the integration of guided munitions with satellite guidance and consists of a ground-based automated training complex and control of flight missions and an on-board equipment complex, which are interconnected by a single special software. At the same time, complex information processing was implemented in the SVP-24 complex, taking into account a significant number of factors affecting the accuracy of combat use and navigation of the bomber, especially during maneuvering. 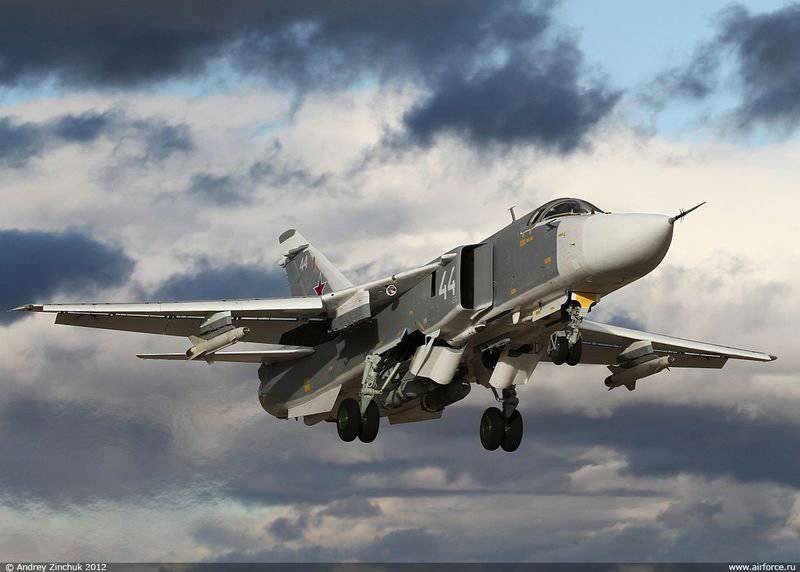 The complex SVP-24, which was put into service in 2008, is now being mass-produced. This system is designed to use all existing, as well as a promising nomenclature of weapons, including controlled ones. The uniqueness of the system lies in the fact that it can be modified for use with various types of carriers - not only combat aircraft, but also helicopters. The SVP-24 “Hephaestus” complex can be installed on MiG-27, Su-24М, Tu-22М3, combat training L-39, as well as attack helicopters Ka-50 and Ka-52.

Gradually, new bombers equipped with this system enter the combat units. At the same time, the responses of combat pilots about the new aiming and navigation complex are rather unequivocal: “into battle only at Hephaestus”. The use of SVP-24 allows to achieve accuracy of bombing with conventional free-fall bombs comparable to CAB. And if we take into account the reliability factor of armaments, then the probability of hitting enemy Su-24M objects with SVP-24 ordinary bombs is even higher than when using adjustable bombs or SD, although the bomber can use all types of high-precision weapons - all the same CAB and guided air-to-surface missiles.

The modernization of the Su-24M front-line bomber in the Su-24M with SVP-24 is a very good example of an integrated approach to the problem. Compared to many other aircraft modernization options, the refinement of GEFEST and T costs very little, but as a result, the military get an aircraft that is able to destroy targets with conventional bombs with an accuracy not available to all modern CAB. In this case, the bomber integrates into the “digital battlefield”, and the diagnostics of all on-board systems of the vehicle is conducted “as-is”. A huge number of pluses, and there are practically no minuses. At the same time, the work on the refinement of other Russian airplanes somehow stalled. Since the modernization of the Tu-22М3 company CJSC "GEFEST and T" produced at its own expense. The plane proved itself very well, but the work on the modernization of the machines is delayed, and this is at a penny cost and speed of work. Perhaps, for the simple reason that the development of budget funds is too delaying, and for modernization according to the program of JSC GEFEST and T, not such large sums are required.