Instant strike from near space

December 25 2010
2
The latest news about aerospace developments in the United States may indicate the emergence of an integrated high-precision system there. weapons aerospace-based. The recent test of the X-37B unmanned orbiter fits into this concept.

The successful completion of the X-37B drone flight left more questions than answers. What did this device do during 244 days in orbit, what was its purpose and what capabilities could it provide to the US military? What is the reason for the revival of the concept of a military “space plane” and how does it fit in with the strategic plans of the Pentagon? 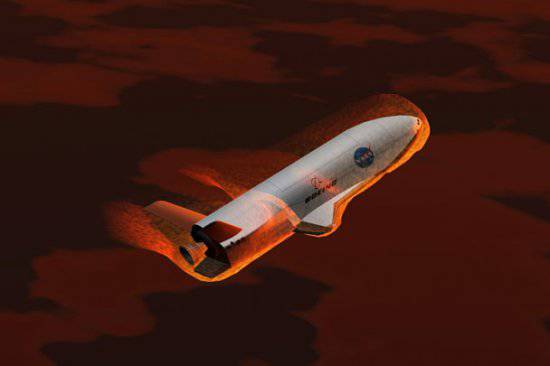 Atmosphere of secrecy, enveloping these tests, together with the already known information about the development in the United States of non-nuclear high-precision warheads and hypersonic strategic cruise missiles makes us take seriously the view that Washington is preparing to deploy a new complex of strike forces and air-space-based weapons .

UAV without a specific destination

22 April 2010, the Atlas V launch vehicle, launched from Cape Canaveral, launched an X-37B research orbital drone into space. An experimental flight began under the code USA-212. Demonstrating quite specific evolution of the orbit and its ability to actively maneuver, on December 3 the aircraft successfully returned to Earth, slightly damaging one of the chassis tires while landing on the strip of Vandenberg airbase in California. A statement immediately followed that in the very near future, exactly the same second apparatus would be sent to orbit.

The Pentagon categorically (not to say - defiantly) refuses to report any specific information about the purpose of X-37B. The complete lack of reliable information has generated a cascade of conjectures of varying degrees of adequacy. Nevertheless, they all revolve around the same point of view: we are witnessing tests of a military device, and abnormal secrecy is associated with unwillingness to “light up” certain tactical and technical elements of a drone or its onboard equipment (weapons?) Ahead of time. In addition, X-37B has already managed to christen the "murderer of satellites", which returns us to the old, still 70-s projects of "combat orbital stations", intended for the hunt for enemy space vehicles.


“No need to be guided by fantasies,” the press service of the US Department of Defense responds sharply to questions from journalists. “Listen only to what we tell you.” Such a straightforward bureaucratic approach, as is not difficult to understand, immediately caused in the press and the Internet the flowering of the most dense conspiracy. Some concerns of specialists and amateurs, however, may well be grounded if we consider the flight of X-37B in connection with a number of other decisions made in the United States recently.

Back in 1957, America began work on the creation of the X-20 Dyna Soar orbital combat aircraft, which was planned to be launched into space on a Titan rocket. The assignment was formulated as widely as possible: reconnaissance, strikes against the earth's surface, and the fight against enemy space vehicles. At the end of 50, the idea of ​​manned orbital bombers still seemed promising. In the group of test pilots of the device was listed the future conqueror of the moon, Neil Armstrong.

The first flight of the Dyna Soar was scheduled for 1966 year, but problems with the upper stage and the rapid development of intercontinental ballistic missiles, which offered a more operational solution to the problem of "global strike", greatly slowed down the development, depriving it of clear objectives. In 1963, US Secretary of Defense Robert McNamara secured the closure of the project, which by that time had already spent a fairly substantial amount - 410 million dollars. (To compare the scale of investment: the giant Apollo lunar program, including all R & D, the creation of a launch vehicle, the entire test cycle and eleven flights of spacecraft, according to NASA estimates, was packed into 23 billion dollars.)

Not lagged behind in the Soviet Union. After the cessation of funding X-20, a project of the aerospace system Spiral was launched, the development of which was entrusted to Gleb Lozino-Lozinsky, the future creator of Buran, who worked at the Mikoyan OKB-155. The Soviet designers proposed a number of original, but complex solutions like a multi-stage disconnection of the booster carrier and the actual combat orbital space plane (it was the MiG-105.11, disrespectful nicknamed for its blunt-shaped form "Laptem"). 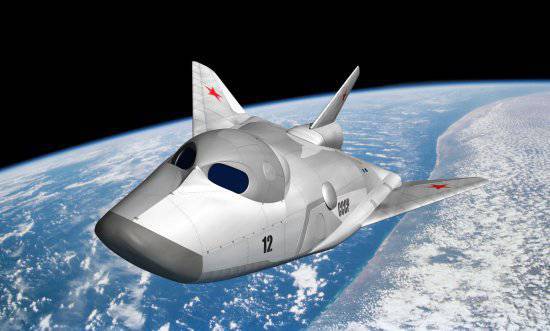 The refusal of the Americans from their project of the orbital shock platform resulted in the fact that the political leadership of the USSR no longer perceived "Spiral" as a priority, concentrating on other areas of the rocket-space race. The development of prototypes was not shaky or hard: by the middle of 70, a manned analogue plane appeared, ready for flight tests, but in 1976, the decision was made to reorient the efforts of the Lozino-Lozinsky team to develop a more promising Energy-Buran system.

It must be recalled that all these R & Ds were conducted against the backdrop of the commitment by both countries to limit the militarization of outer space, primarily the 1967 Space Treaty of the year, which prohibited the deployment of nuclear weapons in near-earth orbits. Under this agreement, a number of rocket systems put on duty formally lost their orbital warheads, although, according to a number of allegations, retained the possibility of their withdrawal if a corresponding political decision is taken.

The main idea of ​​PGS is formulated briefly and very well: “To have the opportunity to strike at any point on the planet within 60 minutes from the moment of the decision”. The development of modern means of reconnaissance, navigation, and high-precision weapons makes it possible to use conventional means of destruction within the framework of this doctrine and to a lesser extent focus on nuclear warheads. This was announced to the US Senate in 2007 by General James Cartwright, one of the leaders of the Joint Chiefs of Staff.

As part of the PGS concept, a number of weapons are being developed, in particular, high-precision non-nuclear warheads for the Trident II and Minuteman III ballistic missiles. But the main interest is a breakthrough theme hypersonic strategic cruise missile X-51A Waverider, the first flight tests of which on board the B-52 bomber passed in May 2010 of the year.

During the tests, the rocket reached the 4,8 M speed. Some sources indicate that this is not the limit and the 6 – 7 M level can become the final operating speeds of the system. Considering the kinetic energy of a hypersonic warhead accelerated to such speeds, we can speak about a simple contact damage of the target (for example, a warship) with a massive “blank”, naturally, in terms of providing target designation and accurate guidance, which the American army pays special attention to.

Together with the design in the interests of the Pentagon of an unmanned vehicle capable of being in orbit for at least six months and carrying the payload of an unexplained purpose, such developments may indicate the formation in the United States of a scientific and practical groundwork for creating percussion systems of the new generation. Calling X-37B as a strike spaceplane is somewhat premature, but after it the development of larger aerospace systems capable of carrying heavy weapons is possible.

The departure from the prevailing emphasis on nuclear warheads of strategic missiles (both ballistic and cruise), caused by rapid progress in targeting, high-precision guidance tools and global navigation systems, forms a tangible "loophole" in the 1967 Space Treaty of the year, which, as we have already mentioned, eliminating the deployment of nuclear weapons in orbit, without regulating conventional weapons. The position regularly expressed by the Russian Foreign Ministry about the urgent need for a new international agreement on the demilitarization of outer space directly indicates the level of concern that Moscow is showing while observing the progress of American space-rocket systems capable of becoming carriers of high-precision non-nuclear weapons based in space.

Under these conditions, the task of building an integrated aerospace defense system capable of intercepting hypersonic targets with speeds of 5 – 6 M, becomes a critical task for powers wishing to save themselves at least to some degree from an “hour delivery”.