For the first time, it became known back in 2006 about a promising Russian self-propelled artillery installation being developed within the framework of the "Coalition-SV" theme. The site already has several articles on this topic, but I would like to talk in more detail about this project and the latest the news about him.


Немного stories
The concept of twin artillery systems originated almost at the beginning of the 20th century. Work in the USSR was actively conducted in the 70s. But technical difficulties due to insufficiently developed technologies did not allow to fully realize the plan. The first domestic incarnation of such a machine was the “product 327”, the main developer of which was Uraltransmash FSUE, the crew of this product was in an isolated fighting compartment in the bow of the hull, while the fighting compartment with a fully mechanized ammunition was in the central part of the modified chassis the main tank T-72 But this idea came to the mind of Russian designers again. The lead contractor is: FSUE Central Research Institute "Petrel" (Nizhny Novgorod). Co-executors: FSUE Uraltransmash, FSUE TsNIIM, FSUE Uralvagonzavod
2С35 "Coalition-SV" is a Russian project of a double-barreled self-propelled artillery installation of a class of self-propelled howitzers.

The location of the crew members' jobs in the armored control module eliminates the ingress of powder gases from the shot. The crew is isolated from the weapons module.

Jobs crew members are located in a computerized control module, which is located in the nose of the chassis. The crew, consisting of 2-3-x people, has complete control over the processes of loading, targeting and firing. The control module is equipped with airborne tactical systems for selecting a target, positioning and navigation. According to the indications of instruments and sensors, the crew constantly monitors the general condition of the vehicle and the amount of ammunition by type of shots.

Each workplace of crew members is equipped with a complex of remote control of automated fire and instrument control of all operations on the displays with a single information command system. The information and control channels for communication of crew jobs in the control module with the weapon module are duplicated. The main hatches of the crew, an evacuation hatch, as well as a technological hatch of the passage to the weapon module are provided.

Installing the control module in the forward part of the hull allows you to place the crew in the least dangerous place of the combat vehicle. 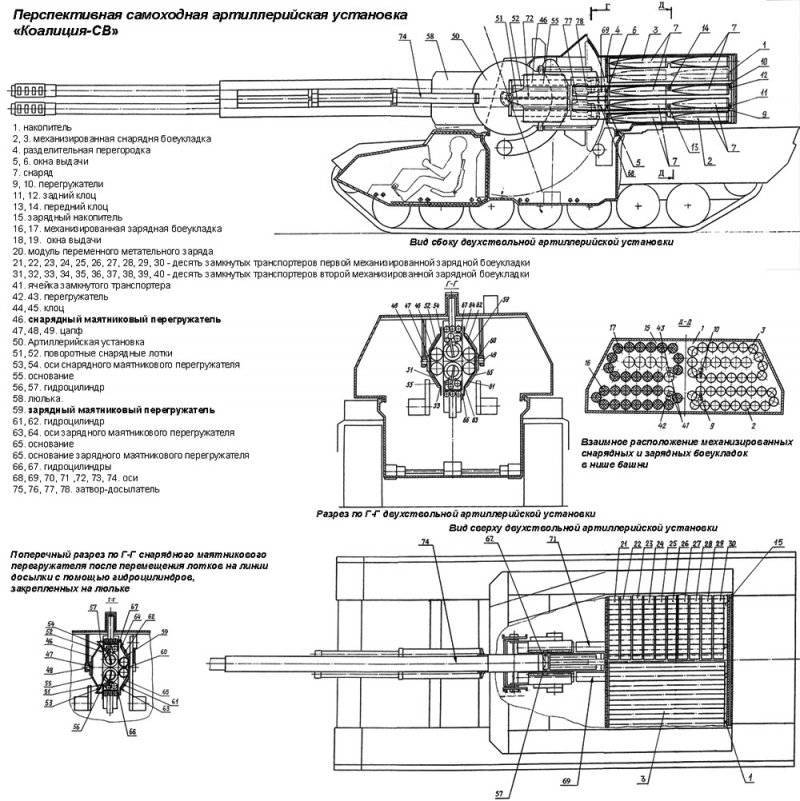 Detailed scheme of SAU "Coalition-SV"
The main armament is located in the turret, where a paired artillery mount and ammunition with a mechanized charging system are installed. The engine is located in the rear of the machine.
The tasks of such an ACS: hit any ground objects at a distance of 70 km. Work in the “Flurry of Squall” mode (English Multiple Rounds Simultaneous Impact, simultaneous hit of several projectiles) Have quick preparations for firing, as well as change positions within 1 minutes. 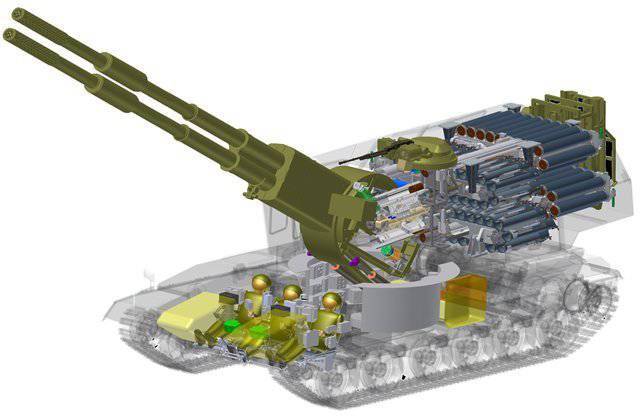 On this model, the layout of the crew, as well as the structure of the tower.

A very interesting version of this ACS is the articulated version. The first section in it is the self-propelled gun itself, but the second, in fact, is a transport-loading machine for more than 200 shots.

From the engine located in the first section, the power flow is transmitted to the second. Due to the presence of the second body, the damping time of the oscillations after the shot is significantly reduced. In addition, the permeability on the ground increases dramatically.

Articulated version
But there is also an option and a charging machine on a wheeled platform. 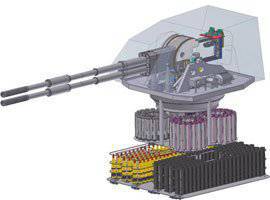 In general, there is a mass of information on this topic. At the beginning of 2010, the Minister of Defense of the Russian Federation stated that the project was not funded by the state, since the Coalition-SV was not included in the priority samples of military equipment, but no official statements were made about the complete cessation of work.

Despite the statements made by the Minister of Defense of the Russian Federation in 2010, the work on the topic “Coalition-SV” continues. In addition, in 2011, the stage of production of working design documentation for the wheeled and tracked versions of the system, as well as the transport-charging machine for them, was to be completed.

The latest news
The news of the end of 2012 of the year. At the same time, tank expert, editor-in-chief of the branch magazine Arsenal of the Fatherland, Viktor Murakhovsky, noted that the Coalition-SV artillery unit would fit the Armata tank chassis much better than the T-90 chassis.

“Armata” is, after all, a new generation of equipment, both in terms of engine, transmission, and chassis, that is, everything that will be used for the Coalition. “Armata” has chassis bearing capacity - 30, it is much higher than T-90, ”Murakhovsky explained.

The representative of the Federal State Unitary Enterprise TsNII "Petrel" also said that the tracked platform is more stable when firing than the wheeled platform, and does not require the extension of supports. At the same time, he did not rule out that in connection with the transition to the wheeled platforms, the Ground Forces would need Coalitions on wheels.

“We expect that after choosing the platform, the Coalition will become the main artillery system, displacing Mstu-S, Akatsion and other installations of the 152 mm caliber,” said the Burevestnik representative. Installations "Coalition-SV", in 2013 year to pass production tests, and in 2014 year - state tests. At the same time, the Msta-S installations, which are now rearming the army, will become morally obsolete by the year of 2020. 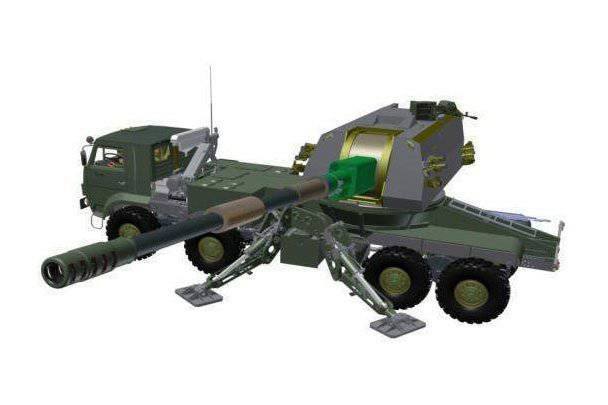 OJSC KAMAZ unveiled 3D-models of the developed promising self-propelled 152-mm artillery complex on a wheelbase, created as part of the Coalition-SV-KSh development work.

The image of a three-dimensional model was published on his blog by Denis Mokrushin. "Today, within the framework of the ROC" Coalition-SV-KSh ", work is underway to create self-propelled artillery weapons on the wheeled vehicle base. For the base of the selected chassis from the family of high-performance cars KAMAZ-6560. After carrying out special modifications to the chassis to match the transport base with the approved technical requirements, a prototype chassis was made and sent to the company where the advanced 152-mm artillery system will be mounted, ”wrote blogger Denis Mokrushin on his page in LiveJournal.

"This is a picture of the 3D model in the first development of the 152-mm artillery system. The prototype will be slightly different. The final version of the model is not yet. The sample and additional information may be by the end of the year," he added.

And just recently a very interesting news appeared: “Experimental thermoelectrochemical artillery mounts were tested in Russia. The gun is one and a half times longer than traditional gun mounts in range.

“Instead of hexogen, a much higher density substance was used in the gun. It exploded with the help of plasma initiation - a special discharge. Due to the high density, the detonation speed is also higher than conventional explosives, and due to the use of plasma, in addition to kinetic energy, an electromagnetic pulse acts on the projectile, ”said an OPK employee.

Experimental artillery mounts were developed at the Petrel Research Institute on the basis of a reinforced 152-millimeter twin-barreled self-propelled X-NUMX-XNNXX “Coalition-SV” self-propelled gun. According to the representative of the military-industrial complex, the tests were of a scientific nature, and the possibility of finalizing the weapon for use in the troops is now being discussed.

The Russian Defense Ministry explained that several types of weapons were being created at once on new physical principles, but the creation of a thermoelectrochemical instrument was not ordered by the department. “If the industry offers it to us, demonstrates and proves that it is much more efficient than what we use now, then we will certainly consider the option of replacement. But so far there have been no such proposals, ”the representative of the Ministry of Defense said. The declared range of the gun is 70 kilometers.

Some conclusions
What we have? The ACS on the T-90 or Armata tracked platform, which has an uninhabited fighting compartment with a fully mechanized combat module, the crew is in an armored capsule with modern target designation systems, positioning, fire control systems, etc. The ACS has a thermoelectric paired double-barreled gun with a rate of fire above 15 shots per minute (there were data that reached 23 shots per minute in critical mode, though this can only last for the first minute salvo) and a range of up to 70 km, with very fast combat readiness and changing positions. In general, such a technique can be talked about for a long time.

But from the very beginning, the Ministry of Defense is trying to ignore this artillery system, in 2010 declaring that it is not financing, and that this is supposedly not a priority area. I would very much like to ask the MoD what is the priority in artillery, right? The answer is: "Coalition-SV-KSh". About this so to say the miracle of technology, I wrote above. They took the platform KAMAZ-6560, and put the combat module on it. And what can you say about such a layout? The 152-mm gun (from MSTA-C seems to) unfolds to the starboard or port side, and the supports of the machine itself and the guns are laid out. How long does it take? What can be said about a quick change of position with such a "cuttlefish"? The principle of loading this complex? Its cross? I have repeatedly read that there is simply a problem of deformation and damage to the KAMAZ chassis in just a few shots ... The rate of fire of this “super weapon”? Range? Dozens of questions ...

My opinion is that Russia does not need such artillery as a "Coalition-SV-KSh", just like Serdyukov's "Lynx" and so on ... The prospects are small, according to some characteristics of the available Soviet SAU will lose. And you, dear readers of the site, what do you think about the ACS "Coalition-SV", "Coalition-SV-KSh" and in general what our country needs now? Unless SV-KSh did not cut money and other flowing?

Ctrl Enter
Noticed a mistake Highlight text and press. Ctrl + Enter
We are
Soviet SAU against German tanks. Part 1Appetites for wheeled self-propelled artillery systems
113 comments
Information
Dear reader, to leave comments on the publication, you must to register.