The main combat equipment of the Airborne Forces will be BMD-4M, "Tigers" and "Kamaz"

16 May 2013
29
The main task facing the command of the Airborne Forces of Russia, as a military command body, is a multi-purpose re-equipment of the airborne troops in the shortest possible time (the next 3-5 years). Colonel-General Vladimir Shamanov, Commander-in-Chief of the Airborne Forces of Russia, told journalists about this. This, in particular, reports the Office of the press service and information of the Ministry of Defense of the Russian Federation on its official website. The emphasis in rearmament will be placed on the purchase of Russian equipment: BMD-4М, Tiger-M armored vehicles and KamAZ armored vehicles.


According to Vladimir Shamanov, in the development of new armored tracked vehicles for paratroopers, the ideology that was laid down by the legendary Vasily Margelov should be maintained - the 3 BMD (platoon) should be paratrooped and transported using the 1 transport plane. At the same time, the characteristics of the armament and the armor-proofness of the assault vehicles must now meet the most stringent modern requirements.

The Commander-in-Chief of the Airborne Forces believes that all these requirements are met by the new BMD-4M. According to him, this is not an ideal combat vehicle, but it has enormous potential for modernization and further improvement. At the same time, this applies both to the base chassis of the vehicle and to its armament module. According to the colonel-general, the first 5 of the new airborne assault vehicles for the final stage of the airborne state tests will be received before the end of the 2013 of the year. Another 5 new BMD-4М, as well as 10 multipurpose shell armored personnel carriers, the Paratroopers, should receive in the first half of next year.

At the same time, Vladimir Shamanov said that the Airborne Command is considering options for adopting special, reconnaissance and support units for lightly armored paratroopers. In particular, the Russian Tiger armored car proved to be quite good at the Airborne Forces, but for the final decision on taking this vehicle into service it is necessary that it undergo a complete and comprehensive set of tests in the troops, including the need to test its landing from Russian military aircraft transport aviation, noted the general. 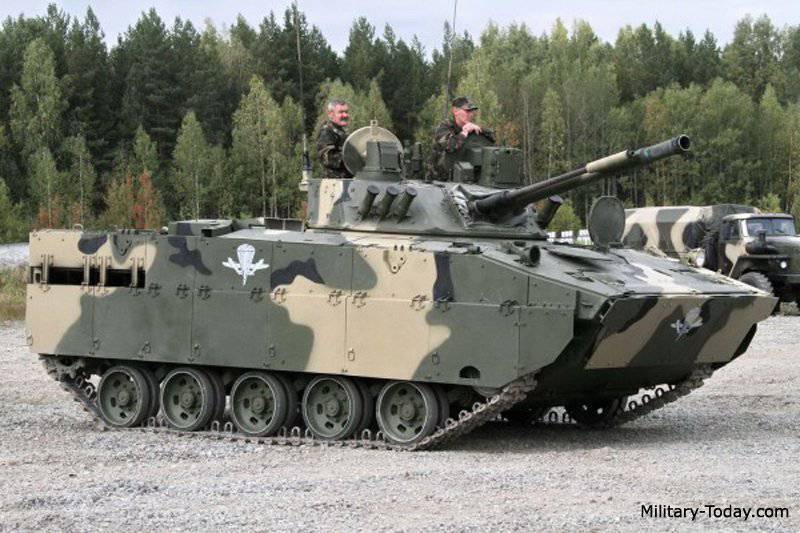 In this regard, the paratroopers have already established close cooperation with the management of "KamAZ", there are good developments. According to Shamanov, in September-October 2013, the first samples of military equipment that meets all the requirements of the Airborne Forces will begin to flow to the troops. A unified ideology and a multi-purpose approach to re-equipping the troops are embedded in the Russian state armaments program and are reflected in the plans for re-equipping and re-equipping the airborne forces in the year to 2020.

BMD-4M or "Gardener" airborne combat vehicle, which is a modernization of the previous version (BMD-4). It differs from its predecessor by the new engine, body, chassis and other nodes. This combat machine is a model of airborne, floating military equipment on a tracked platform. BMD-4M can be parachuted at a given point by parachute or landing method, either without personnel or with personnel inside the vehicle. This model of armored vehicles allows you to conduct maneuverable offensive and defensive actions in an autonomous mode, as well as in cooperation with other types and types of weapons.

BMD-4M has a unique degree of protection and a powerful weapon system. The new Russian development on 80% is unified in units and assemblies with BMP-3, which significantly simplifies the process of its production, operation and maintenance. With a weight of 13,5 tons, the BMD-4M has more powerful weapons, improved buoyancy, while the armor is thinner than the BMD-4. On the new machine uses a special heavy-duty aluminum alloy, which provides the best protection for the crew. According to the creators of the car, the BMD-4M armor has properties that exclude the appearance of fragments inside the habitable compartment of an armored vehicle in the event that it is hit by projectiles or large-caliber cartridges.

The new airborne combat vehicle is equipped with the Bahcha-U combat module, which was created in the famous Tula Instrument Design Bureau. This module has previously been used on BMD-4, which eliminates the need for retraining of personnel, as well as the replacement of simulators installed in military schools. Moreover, this combat module is almost 100% unified with the armament of the domestic BMP-3. These machines use the same weapons, ammunition and sighting and computing systems. Compared with the BMD-3 armament, the new combat compartment in firepower is at least 2,5 times, and in some combat characteristics, an order of magnitude higher and allows paratroopers to confidently solve various combat missions without fire support from artillery and tanks not only in offensive operations, but also in defense operations. 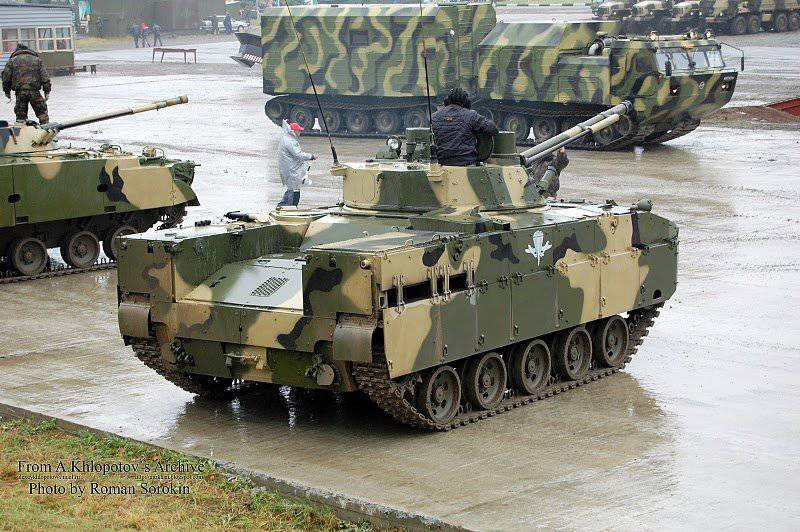 The crew of the BMD-4M includes the 3 man, she can also take aboard up to the 5 man. In the forward part of the BMD there is a driver’s office, then there is a tower with gunner, commander and main armament. Behind the tower is a squad of troops, designed for 5 people. For their dismounting from the machine, a special aft hatch is used. In the aft BMD-4М is located the engine-transmission compartment, in which the 2ВХNUMX-06 diesel engine is installed with an integrated gas turbine supercharging. Engine power - 2 HP Cruising BMD-450М - up to 4 km, fuel supply - 500 l. When driving on the road, the car can accelerate to 450 km / h, speed afloat - 70 km / h. To move the machine afloat, the 10 is equipped with special hydro jet propulsion units.

It is assumed that the special armored car "Tigr-M" will be adopted by the Russian armed forces in the 2013 year. This was previously stated by the press secretary of the industrial company (MIC) Sergei Suvorov. According to him, the Tigr armored car in an improved version was supposed to be adopted by the Russian army in the first half of 2013. According to Suvorov, Tigr-M has fully completed a series of state tests and is currently being finalized according to customer requirements. In particular, work is underway to increase its mine protection.

Sergei Suvorov noted that despite the fact that the Tigr-M armored car had not yet been officially adopted by the Russian army, it was mass-produced at the Arzamas engineering plant, including for export supplies. Currently, Tigr armored vehicles are delivered to Brazil, Republic of the Congo, Guinea and Uruguay. A new diesel engine YMZ 5347-10 of increased power is installed on the Tigr-M armored car, the filtering unit, the new armored hood, the number of seats was increased to 9, the turntable equipped with a double hatch was replaced with a single hinge square shape. 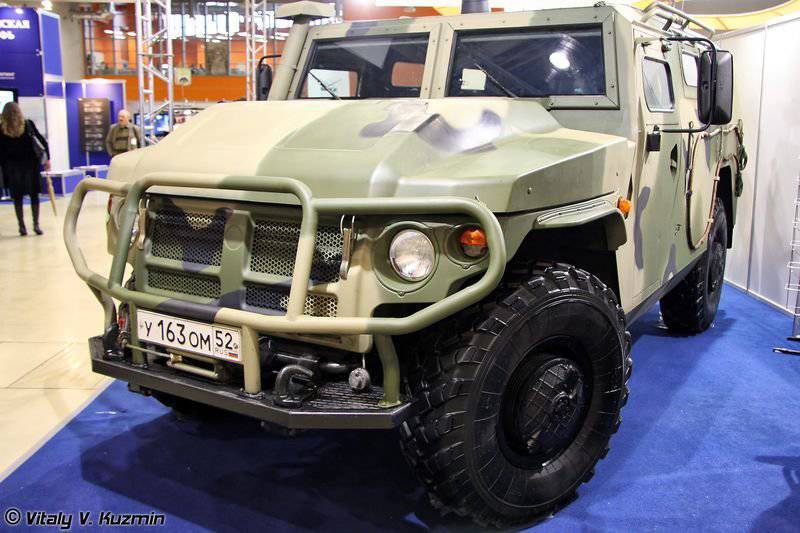 The special armored car GAZ-233114 "Tigr-M" has the 5-th class of ballistic protection. In the cabin "Tigra-M" equipped with a place to accommodate the driver, the commander of the machine and 7 man landing. It also provides space for the placement of ammunition, rocket anti-tank grenades (like the RPG-26), the installation of a lock of radio-controlled explosive devices and a radio station. The car is made on the wheel formula 4х4, its carrying capacity is up to 1500 kg. Tigra’s curb weight is 7800 kg, the maximum speed on the highway is 120-125 km / h. Machine can be equipped with 5-speed automatic transmission or 6-speed mechanics.

It is impossible to speak with complete certainty about what kind of KamAZ combat vehicles interested the airborne troops. However, the Airborne Forces could arrange at least 3 models that are manufactured in Naberezhnye Chelny. We are talking about the Italian Iveco armored car, which in Russia was called the “Lynx” (but this option is unlikely, since the airborne forces are going to acquire the Tigr-M armored cars adapted for their purposes), the Tayfun-K and the Vystrel- M.

In particular, not so long ago, the Commander-in-Chief of the Airborne Forces said that airborne assault units could be armed with Typhoon-K armored vehicles. In this case, most likely, we are talking about the version of this machine with the wheel formula 4х4. Work on the creation of this model are in full swing at KamAZ. At the same time, the serial version of the machine has a wheel formula 6х6 and is unlikely to suit paratroopers by weight. According to available information, the total mass of the modular "Typhoon" - 21 ton, hull - 17 tons. At the same time, the “Shot-M” armored car may also be of interest to paratroopers, since it has a smaller mass - up to 14 tons. In this case, an armored car “Shot-M” is a transitional model to armored cars of the “Typhoon” family with the wheel formula 4х4. 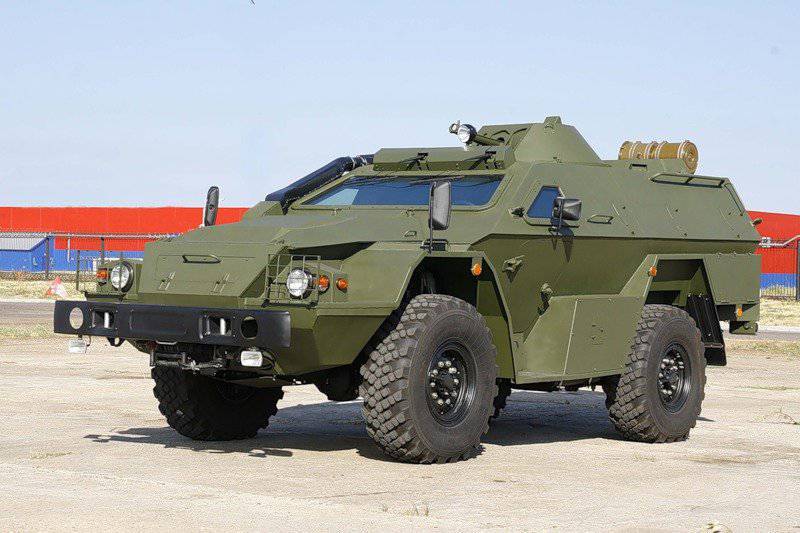 Ctrl Enter
Noticed oshЫbku Highlight text and press. Ctrl + Enter
We are
What is armed, how equipped and what equipment is in service with Russian paratroopers (photo report)
Military Reviewin Yandex News
Military Reviewin Google News
29 comments
Information
Dear reader, to leave comments on the publication, you must to register.