20 May 2013
17
During the Second World War Tanks significantly heavier, and also “overgrown” with thick and powerful armor. Tank and anti-tank guns of the beginning of the war could no longer cope with the protection of military vehicles that appeared in 1944-45. At the end of the war, it became clear that a similar trend with an increase in the level of protection of tanks will continue and therefore new tank guns of even greater power are needed. As later revealed история, the development of heavy tanks with thick and durable armor eventually stalled, and then completely stopped with the advent of a new class of armored vehicles - the main battle tanks. However, before that, the leading countries of the world had managed to make a huge number of experimental and serial models of armored vehicles that amazed the imagination with their characteristics.


Soon after the victory over Germany, Britain began to prepare for a possible war with the Soviet Union. For this, it needed a new combat vehicle capable of fighting any Soviet armored vehicles, including the newest IS-3 heavy tanks, and in the long run new even more protected combat vehicles. In the second half of the forties, the increase in armor penetration of tank guns in most cases was reduced to an increase in caliber and other related parameters. In accordance with this concept, the British designers began two projects of self-propelled artillery systems with different weapons.

The first project appeared FV4004 Conway. It was assumed that this anti-tank self-propelled gun will get 120-mm rifled gun L1, but it will retain a number of positive features of medium tanks. To simplify the work, the Centurion serial medium tank was chosen as the basis for the FV4004. From the base machine, the tank destroyer FV4004 received an armored body, an engine with a transmission, and a chassis. Thus, the frontal armor of the prototype FV4004 had a thickness of 76 millimeters, the sides of the 51 mm, and the feed - 32 mm. The 640-powered Centurion engine provided the original tank with a maximum speed of 35 kilometers per hour on the highway. However, after the conversion into a self-propelled gun, the armored car was noticeably heavier. According to various estimates, after the installation of a new turret with a larger caliber gun, the combat mass of the tank destroyer reached 53-55 tons. Because of this, the speed characteristics left much to be desired. 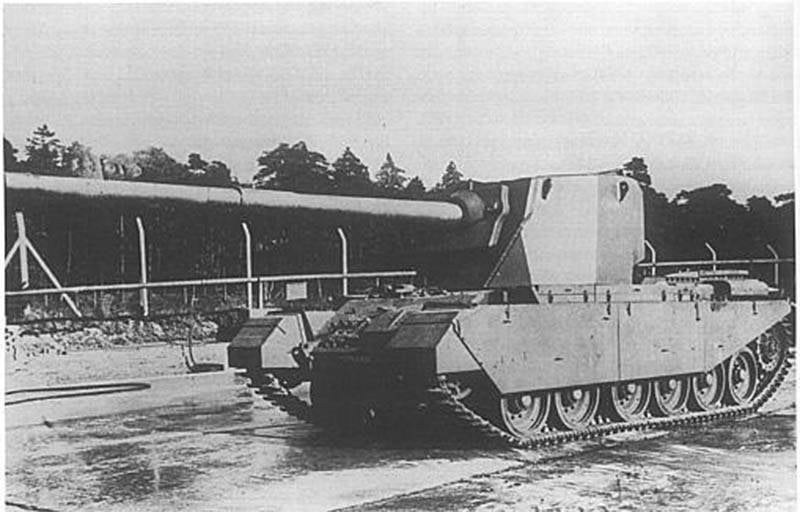 Instead of the native tower, a large aggregate of a characteristic angular shape was installed on the Centurion chassis. Tower "Conway" was almost twice as high as the tower of the base tank, which accordingly changed the appearance of the car. There are no exact data regarding the reservation of the tower, but it can be assumed that the level of protection remained at the same level. Probably, the tower of the prototype FV4004 was, as they say, a draft option and would later undergo changes. However, it was the Centurion that traveled through the landfills of Britain with a new “box” in place of the old tower.

The large dimensions of the new tower were due to the size and rollback of the new gun. The breech of the 120 caliber of millimeters took up a considerable amount inside the crew compartment, which, combined with the size of the ammunition packs and crew jobs, influenced the size and layout of the turret. In the fighting compartment housed the commander, gunner and loader. According to reports, the entire ammunition was stored in the aft niche of the tower, as in modern Western tanks. 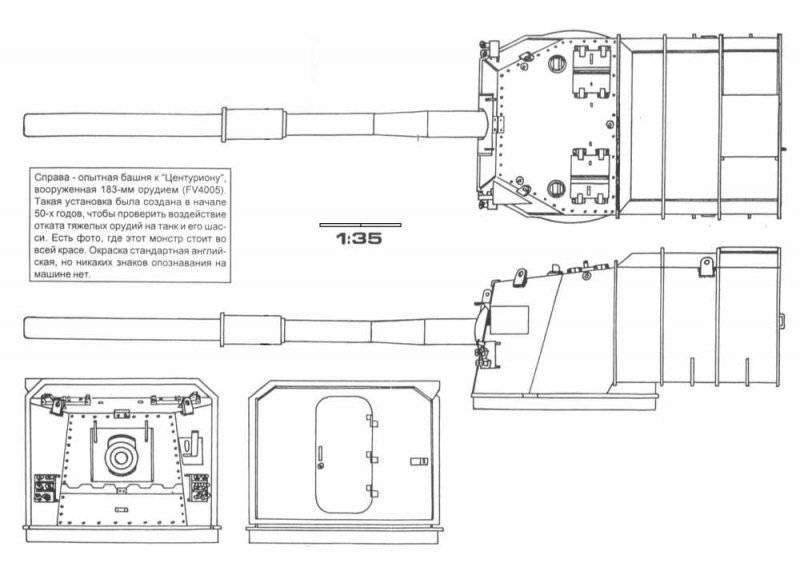 Precise performance data on the 120-mm guns of the Conway tank destroyer are not available. In various sources, there are numbers in 170-180 millimeters of armor from a kilometer range and even 200. Probably, such characteristics met the requirements of the British military regarding the defeat of existing and prospective heavy enemy tanks. It is worth noting, with such opportunities, in the event of a collision between the ACS FV4004 and the EC-3 tank, the outcome of the battle would depend solely on the skill of the tank crew, since both vehicles could hit each other at long range.

At the stage when projects of new tank destroyers began, the customer proposed to equip the promising vehicle with even more powerful weapons. The FV4005 self-propelled gun, unlike the FV4004, was supposed to carry a 183 caliber millimeter cannon. Such a weapon could surely hit any existing and promising tanks. However, the installation of such a powerful gun was not too easy. First, the Centurion chassis, being used in the project, would work, as they say, at the limit of its capabilities. Secondly, the work of the ACS crew became too complicated and it was necessary to look for some new solutions.

The first problem was solved with the help of new anti-recoil devices of increased efficiency, which reduced the return to acceptable values. However, it was still too strong, and therefore had to significantly limit the sector of horizontal focus. According to calculations, when turning the turret and the cannon at an angle exceeding the permissible, the shot could turn the combat vehicle over. The second problem, which dealt with a powerful weapon, was solved in a more interesting and original way. Since the ammunition for the gun was too heavy, the loader was freed from moving around the combat compartment. The drum loader was placed to the right of the breech, and the loader was made an operator.

It is interesting that the first tests of the tank destroyer FV4005 took place without a tower "box". For some reason, the prototype was first equipped only with the lower part of the tower with the system for fastening the gun, the gun itself and a number of auxiliary units, including an automatic loader. The reasons for this are not exactly known. In various sources are called as a protracted development, and the need to check the correct layout of weapons and equipment, and only then close them with an armored turret of suitable form. 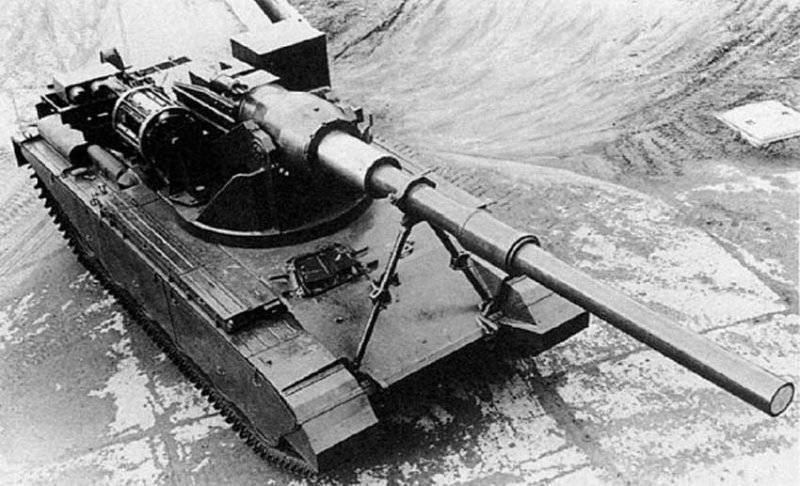 The contours of the finished tower FV4005 to some extent resembled the shape of the tower FV4004. However, due to the presence of a more powerful and large gun with an automatic loader, it turned out to be larger and more massive. There are no data on booking the tower, but some nuances of the photo of the prototype of the self-propelled gun suggest that this machine was initially equipped only with anti-bullet protection of the stern and sides of the tower and, possibly, with thicker front sheets. The relatively thin sides and the roof were reinforced with characteristic stiffening ribs. For landing the crew and maintenance tools in the rear sheet of the tower provided a hatch door.

The combat mass of the prototype FV4005, according to some data, reached almost 60 tons. Given the old engine of the Centurion, it is not difficult to imagine the driving characteristics of the resulting tank destroyer. As for firepower, the FV4005 could surely hit any of the available or only developed tanks of the world at a distance of two to three kilometers. The main problem in this case was shooting accuracy.

Both projects of tank destroyers with record-breaking powerful weapons started at the very beginning of the fifties. The first on the landfill was the FV4004 machine. However, just a few months after the start of the test, in 1951, this project was closed. FV4005 was brought to the testing stage only in 55. The first few months, this self-propelled gun, as already mentioned, went without armor protection of tower equipment, but later it was “completed”. Tests of a combat vehicle with a 183-mm gun lasted for almost two years. In 1957, the FV4005 project was considered unpromising and also closed.

Probably the main reason for the rejection of the rather interesting and probably promising tank destroyers was their driving characteristics. As it turned out, the new towers with powerful guns were an unbearable burden for the chassis of the Centurion tank. The development of a special chassis with sufficient carrying capacity, apparently, was considered inexpedient. As for weapons, guns caliber 120 and 183 millimeter turned out too complicated to manufacture and operate. In addition, in the second half of the fifties, the leading countries of the world were already hard at work on the creation of anti-tank missile systems, which promised to be much more effective than the existing artillery.

During the FV4004 and FV4005 projects, only one prototype was built. They were actively tested under various conditions and tested weapons. After testing, both prototypes remained at the site, they decided not to dispose of. According to some reports, in subsequent years, the FV4005 machine underwent some changes. Thus, the base chassis lost the tower and was used in other tests. A few years later, the prototype was restored, but using another armored hull. Currently, both tank destroyers are located in tank museums, but only one is on display. On the ACS with the 183-mm cannon can be viewed in the tank museum of the city of Bovington. 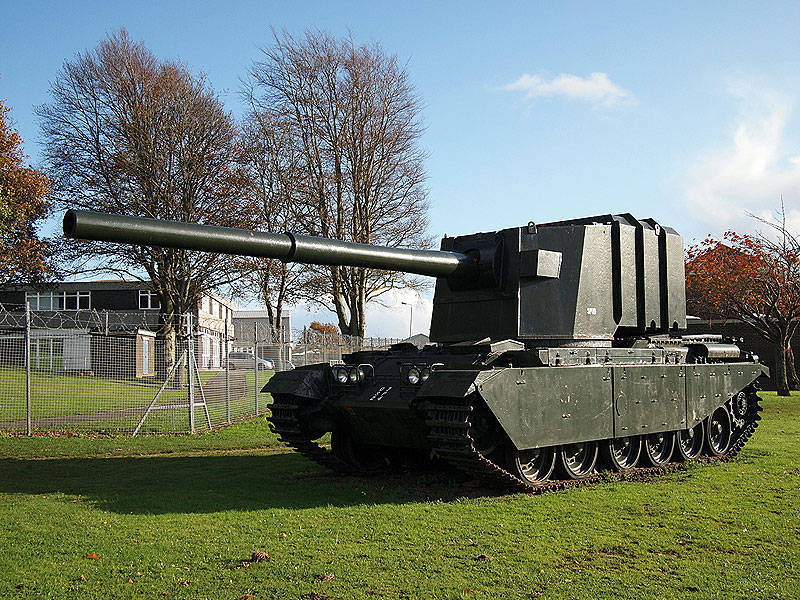 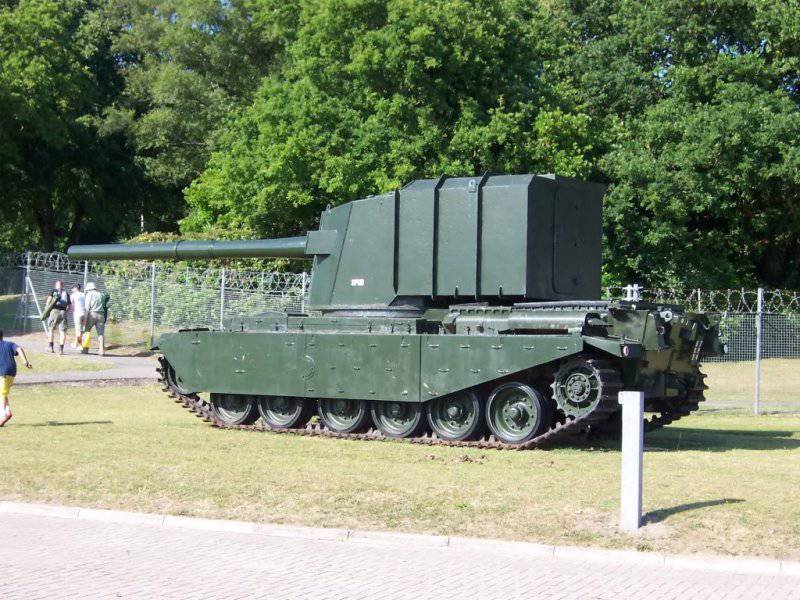 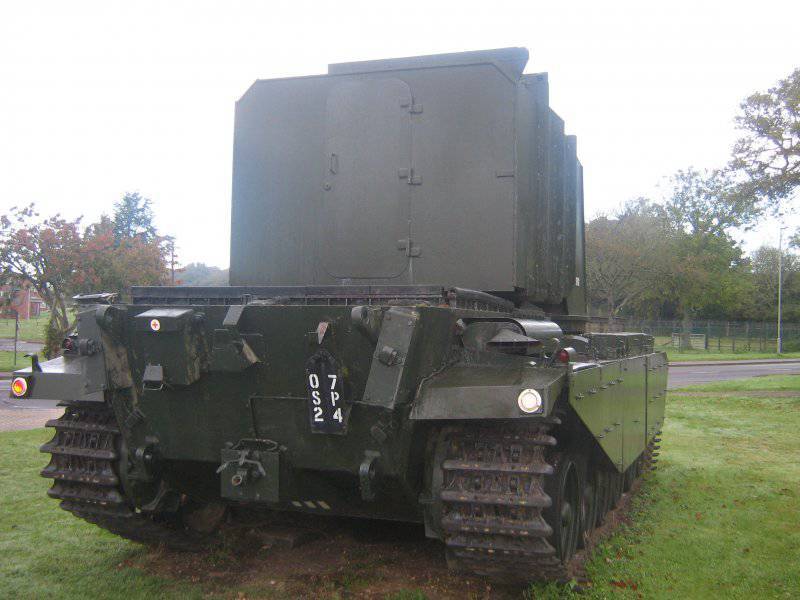 Ctrl Enter
Noticed a mistake Highlight text and press. Ctrl + Enter
We are
Domestic anti-tank self-propelled artillery. 1-Part IArmor is strong and our tanks are fast
17 comments
Information
Dear reader, to leave comments on the publication, you must to register.