16 May 2013
7
First Tanks appeared a very long time ago and, despite their not-so-best characteristics, could turn the tide of battle only by their presence. They were afraid of tanks, there are many documents that confirm that the soldiers simply threw themselves all at once at the sight of such military equipment. However, for a long time this could not continue and tanks became an integral part of any army, and naturally options appeared weapons for fighting with them. Since the reservation of tanks for a long time was simply bulletproof, a new class of weapons appeared, namely the anti-tank gun. Where standard weapons could not cope, punching it, let thin, but still armor, anti-tank guns left excellent holes, hitting the crew of the car and individual units, disrupting the normal operation of the mechanisms of tanks. Subsequently, the tanks were overgrown with armor and the MFR became practically useless, although they were already used to destroy other targets.

The first massively produced anti-gun was Mauser Tankgewehr, this alone was not the only sample of such weapons at that time. Interest in the PTR was quite large, interested in these weapons and Poland, which at that time considered its likely opponent of the USSR. In connection with the adoption of the armament of the BT and T-26 tanks, a program of arming the anti-tank guns to the Polish army was urgently developed, there was only one problem - there were no anti-tank guns themselves. The solution to this problem was the development of an APP for Uruguay, which was dealt with by Josef Marozhek. As such, there was no order and the weapon was developed entirely on its own initiative with the expectation that the sample would interest the needy customer. Understanding that even if successful, a lot of money cannot be obtained from this, and “such a cow is needed most” the project has changed its goal. This was the beginning of the creation of the sample wz. 35 Ur. A noteworthy point was that at the end of the name they decided to leave a mention, albeit abbreviated, of Uruguay, which, in theory, should have knocked down the likely enemy, since it was impossible to say with certainty for whom the weapon. 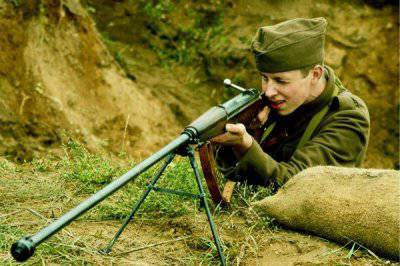 By and large, wz. The 35 Ur doesn’t stand out by anything remarkable and is a regular rifle with a manual reload, with a magazine for three rounds and a sliding bolt locking the barrel bore when turning. All this would be so if not for a few details and the size of the weapon. Since the big shooter needed a big cartridge, along with the weapon was developed ammunition, which had the metric designation 7,92х107. Despite the relatively small caliber for such ammunition, the weight of the bullet itself was 14,5 grams, which accelerated along the bore to the speed of 1275 meters per second. To achieve such a bullet speed, an 10,2 gram of gunpowder was required, which created quite a lot of pressure in the bore and reduced its survivability. In general, the survivability of the barrel of weapons was the main problem in the development, and the maximum that was achieved was just 300 shots, although for an MFR this is a low but acceptable result. In 1935, the anti-tank gun wz. 35 Ur successfully passed the tests, and in 1938, it began to be supplied to the troops.

The final weapon had some interesting details. First of all, it is a fairly effective muzzle brake-recoil compensator. But much more interesting was the safety device, which was a ring on the back of the bolt. When turning the ring, it was possible to make a smooth descent of the firing mechanism, after which the weapon became completely safe. For the platoon it was not necessary to unlock the barrel bore and generally touch the bolt, it was enough just to pull the ring, after which it was possible to shoot. Thus, it was possible to safely carry a cartridge in the chamber, expanding the number of simultaneously charged cartridges from 3 to 4, although it is debatable to call this an absolute advantage. The sights of the weapon are the simplest, consist of an adjustable rear sight and a front sight. For the convenience of firing there are folding, but not adjustable in height bipod.

One of the most interesting moments is that, despite the simplicity of the weapon and the fact that there were more effective samples, only officers were allowed to the MFR, and the weapon itself was almost secret. It is difficult to say why the weapon was hiding so much and who was the initiator of this phenomenon, but in August 1939 there were about 3,5 thousands of weapons in the army that didn’t help in the fight against the Germans. They did not help due to the fact that almost all of them were in the boxes in the warehouses and were not handed out to the troops, in fact, in this form of weapons and fell to our future enemy. After the capture of captured PTR this weapon was adopted by the army of Italy and Germany. Already under the name PzB 770 (P), the captured weapons were successfully used by the fascists against our tanks and not only tanks, although German samples of anti-tank guns showed better results, mainly due to the cartridge. In general, 7,92x107 and 7,92x94 showed the same results, but the last Germans showed a higher percentage of penetration when meeting with armor at an angle, at distances 200 meters and above. 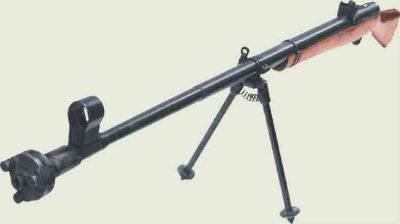 Got a few weapons and ammunition for him and the Soviet troops during the liberation campaign in 1939 year. However, it was decided to use the obtained samples as the basis for the domestic model of the PTR, the creation of which was entrusted to Tula gunsmiths Salishchev and Galkin. The result of the work of the designers was a test conducted in the 1941 year, but the test results were not the best and the weapons were abandoned even without attempts at refinement, in addition, there were more promising samples of MWT.

Summing up all of the above, it is impossible not to note the short-sightedness of the command of the Polish army, which had a weapon that, although it could not turn the tide. stories, but at least somehow could help in the fight against enemy armored vehicles, and instead, they actually gave the weapon to the enemy. It should be noted as well that with this sample a little late, since it was effective against armor with a thickness of 7-12 millimeters. Nevertheless, the weapon was made, produced in series, except that it participated in the war not on the side of its creators.