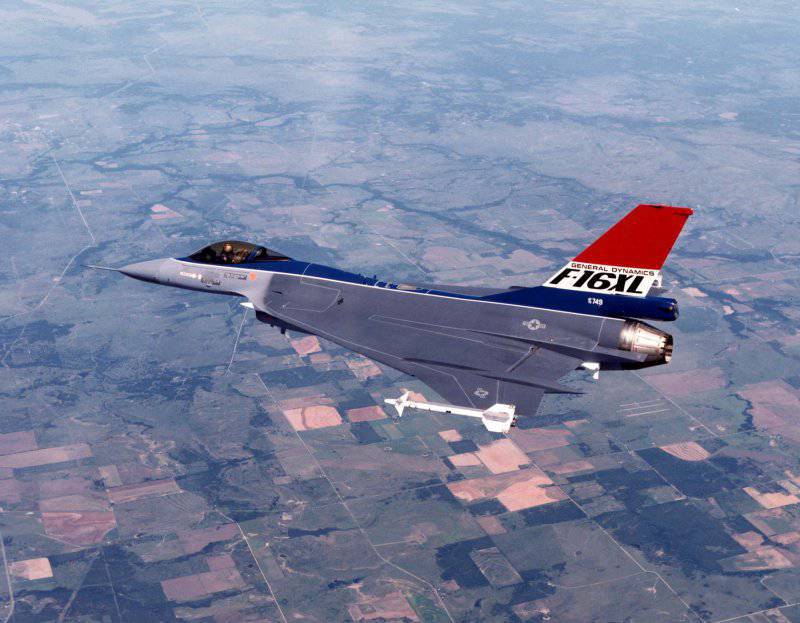 In February, 1980, General Dynamics, proposed using a version of the Fighting Falcon with a radically modified wing shape, originally proposed for use on Concorde-type supersonic airliners. The project was named SCAMP (Supersonic Cruise and Maneuvering Program), and was then renamed F-16XL. The deltoid triangular wing with a double sweep along the leading edge had a total area of ​​58.8 square meters (more than twice the size of the standard F-16 wing).

The objectives of the research were innovative forms and curvature of the wing profile to ensure effective supersonic cruising speed, while maintaining maneuverability to sound fighters. The design was supposed to provide low resistance at high subsonic or supersonic speeds without compromising maneuverability at low speeds. 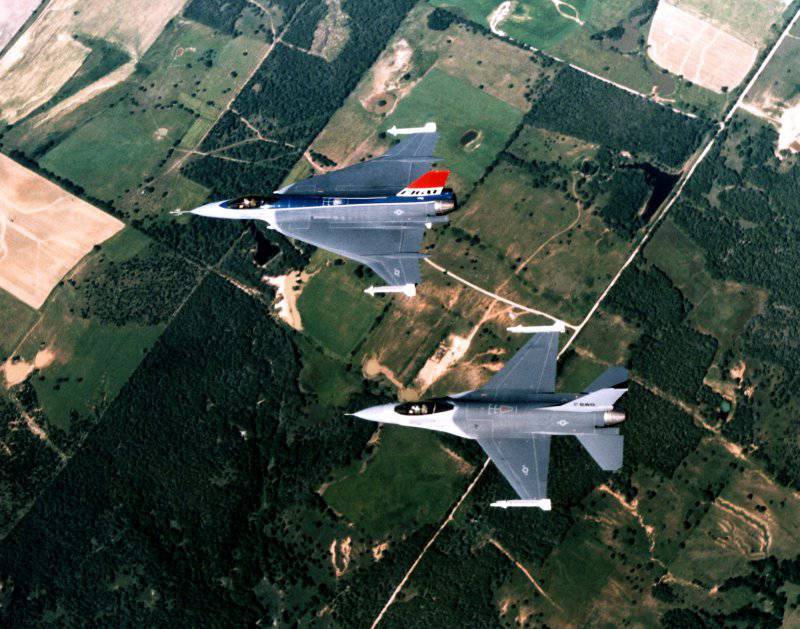 The program was originally funded by the manufacturer and involved two experienced F-16A. At the end of the 1980s, the United States Air Force and General Dynamics agreed on a joint testing program, and the Air Force provided the third and fifth experienced F-16 (crew number А-3, serial number 75-0747 and А-5, serial number 75-0749) for conversion to prototypes F-16XL.

The fuselage was extended by 142 cm to 16.5 meters through two new inserts at the joints between the three main fuselage nodes: one 66 and centimeter insert was placed at the rear split point of the wing and centimeter in the front. However, the rear 76-and centimeter insert was not a continuous segment from the bottom to the top. It was 66 inches long, but there wasn’t already been seen. Under the wing, this insert, the 26 inches segment was injected directly into the aft section of the main chassis, the 26 inches are still inches above the wing segment, but 26 inches farther than the aft segment below the wing are inserted. As a result, this insertion was similar to the reverse "Z". The fuselage extensions made it possible to make the tail section bevelled to 26 degrees, necessary to prevent the engine nozzle from touching the runway during takeoff and landing. 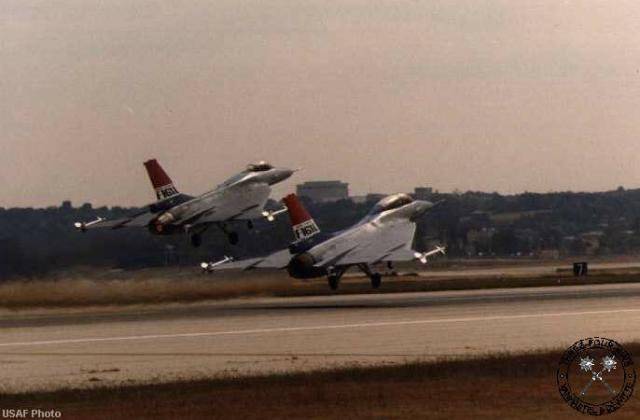 For the same reason, the XL does not have the ventral carinae, but they are not needed for it, since, on the whole, the XL stability characteristics turned out to be higher than those of the F-16. 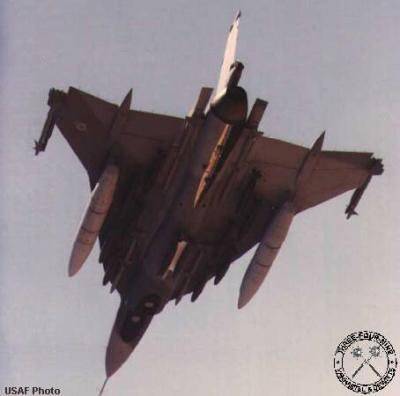 Sixty-six centimeter insert affected the engine's air intake with its lower part, because the front insert of the fuselage was applied only to the upper part of the fuselage. As a result, the air intake of the F-16XL engine turned out to be 66 cm longer than the standard F-16A. 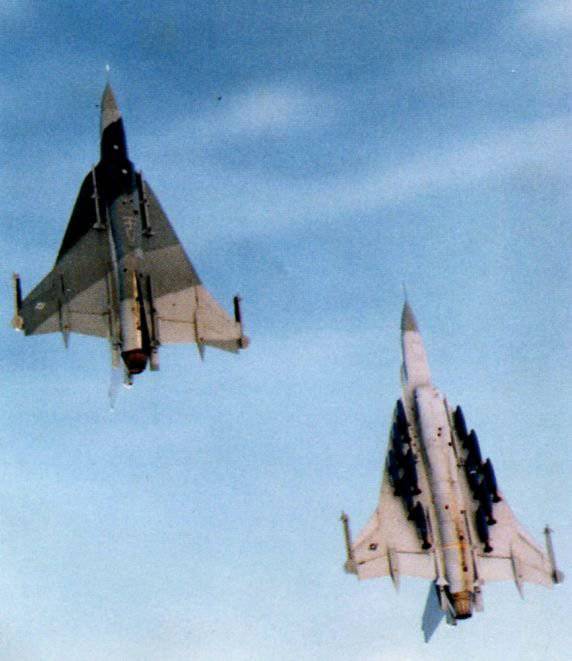 The wing shape in the plan was changed to the swept wing with a fracture along the leading edge with an area of ​​120% larger than the original F-16 wing. In order to preserve the weight of the new wing, carbon composite materials were widely used in its upper and lower plating layers. Thus, the economy of weight only in wings made 272 kilogram. The wing spar design has a sweep angle from 50º to 70º and has become heavier than the original kilogram on the 1179. Increasing the internal volume, both by lengthening the fuselage and expanding the wing, increased internal fuel tanks by 82%, and the increased wing area increased the number of suspension points to 27 and increased the combat load almost 2 times. Despite the resulting lengthening of the fuselage, the new designation XL does not mean "Extra Large" (very large). 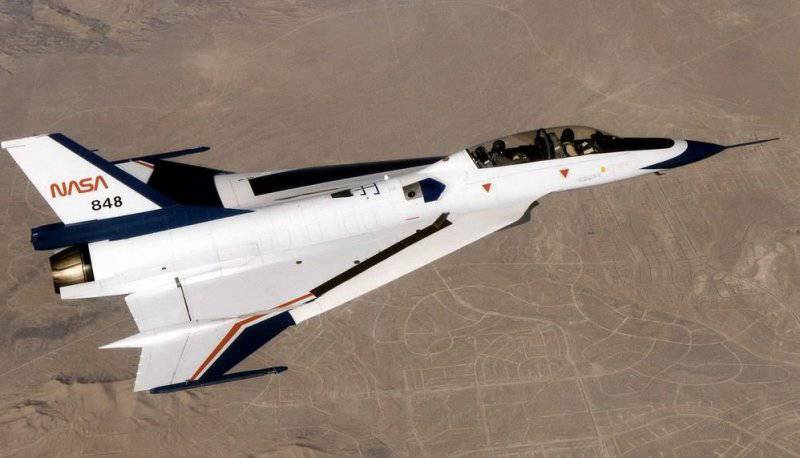 By improving the shape of the wing and optimizing the curvature of the profile, the final configuration of the aircraft provided the 25% improvement in maximum lift relative to F-16 at supersonic speeds and 11% improvement on subsonic. The F-16XL's handling was quite different from the standard F-16, providing a more stable (smooth) flight at high speeds and low altitudes. The result was a very efficient fighter with a large wing ensuring the integration of a large number of weapons on external hangers.

The first of the two F-16XL (serial number 75-0749) that were modified was single and equipped with a F100-PW-200 turbojet engine. For the first time, he was raised into the sky of July 3 of 1982 of the year by James McKinney. The second F-16XL (serial number 75-0747) was originally equipped with a General Electric F110-GE-100 turbojet with a weight of 13 tons. It was remade from an 3 prototype aircraft (tail number A-3), which was severely damaged in a crash during a landing on the open day in August 1980. When taking off from the aircraft, the nose gear crashed. It was decided to sit down without releasing the chassis. As a result, the plane was badly hurt. When the glider arrived at Fort Worth for use in the XL program, it lacked the entire front of the aircraft. In the process of repair, it was converted into a double. As an XL aircraft, it was first flown into the 29 of October 1982, piloted by Alex Wolf and Jim McKinney for the first time. 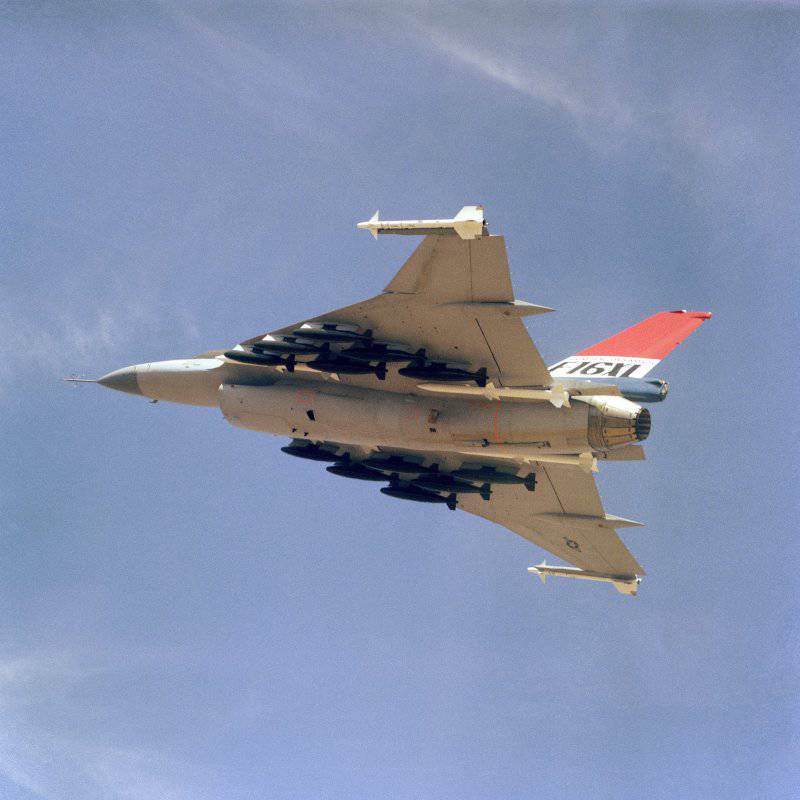 In March, the 1981 of the United States Air Force announced the creation of a new improved tactical fighter. General Dynamics offered for the competition the F-16XL fighter, and McDonnell Douglas the two-seat F-15B Eagle. Due to the increased fuel capacity and combat load, the F-16XL could carry two times more weapons than the F-16 and had an increased 40% range. Increased combat load could be placed on 27-and suspension units located as follows:

16 under the wings on 340 kg each
4 for AMRAAM AIM-120 missile suspension, partially hidden in the wing root
2 on wingtips
1 central ventral pylon
2 under the wings for "heavy" ammunition
2 in the lower front of the fuselage for low-altitude navigation sighting infrared systems LANTIRN 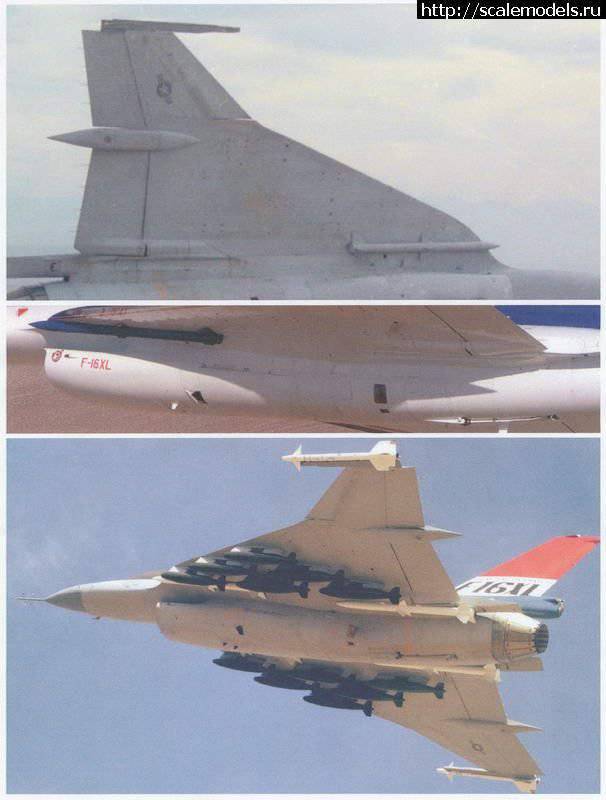 In addition, when an additional fuel tank was placed on the “heavy” suspension, he physically covered another suspension point under the wing. Therefore, with external fuel tanks, the maximum number of suspension points for weapons on the wings was reduced to 10. On the other hand, a device for attaching two bombs could also be placed under the fuselage. Without the use of additional fuel tanks, the maximum amount of ammunition caliber 227 kg was increased to 16. The XL also could carry a liter fuel tank discharged by the 1100 under the fuselage. 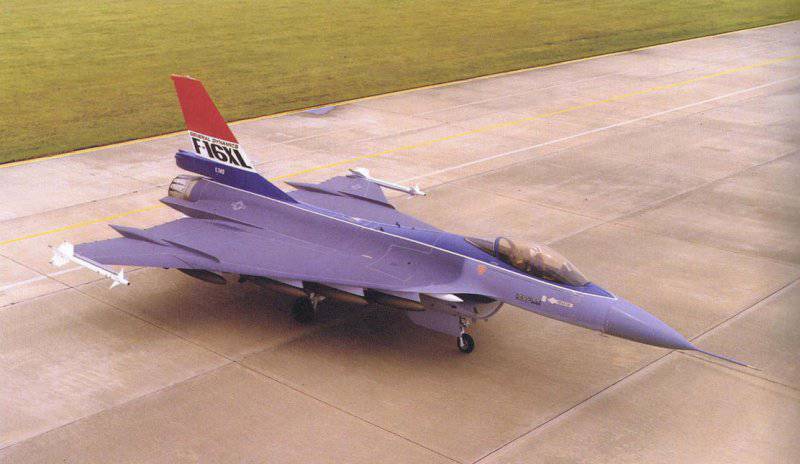 In February, the US Air Force 1984 announced the preference for the McDonnell Douglas fighter known as the F-15E Strike Eagle. If the F-16XL won the competition, the F-16E aircraft would be produced as single and F-16F as doubles. XL Project Lead Engineer John G. Williams (John G. Williams) said: "XL is a wonderful plane, but it was a victim of the US Air Force wanting to continue producing F-15, which is understandable. Sometimes you win these political games, sometimes not. By most XL parameters are superior to the F-15 as an assault plane, but the F-15 is good enough. "

After losing 1985 in the summer's competition in the Ministry of Defense, General Dynamics returned both F-16XL to Fort Worth, where he placed them in storage. These aircraft made 437 and 361 departures, respectively, and although the supersonic cruising speed without afterburner was the original goal of the F-16XL program, the aircraft never was able to fully implement it. 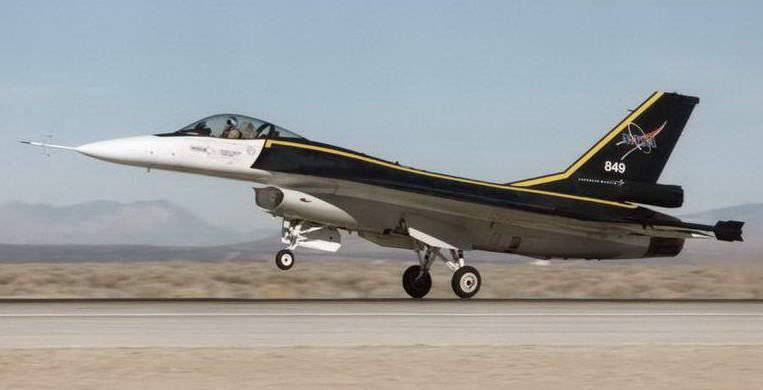 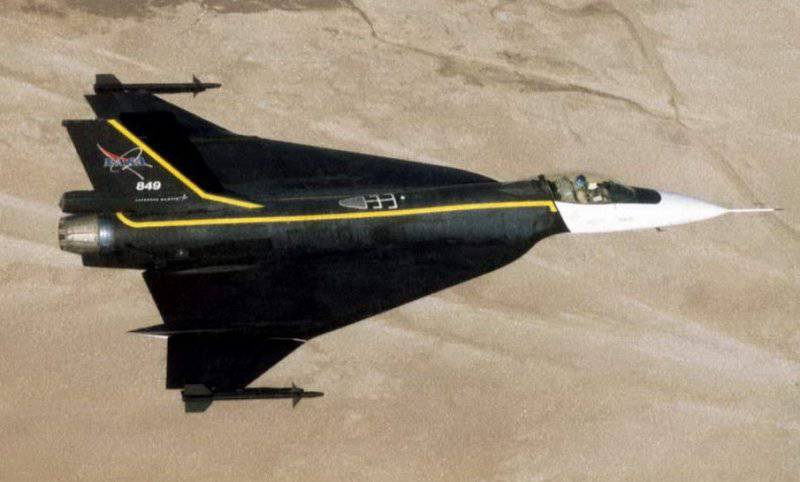 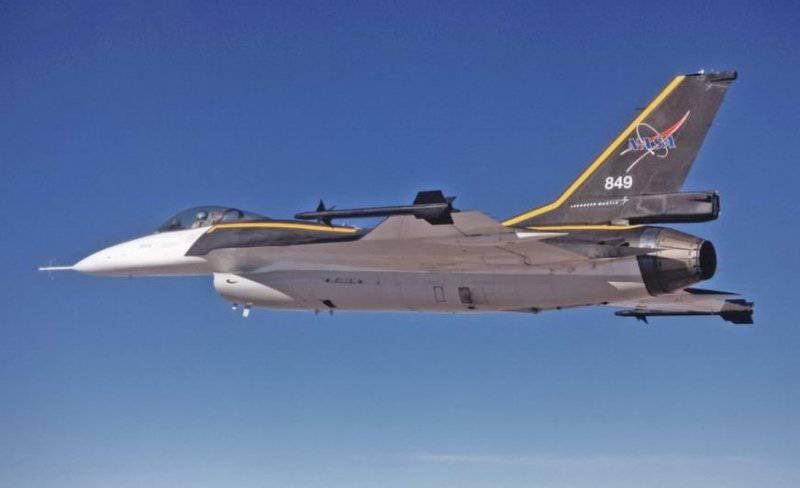 The first F-16XL took off again on the 9 of March 1989 of the year and flew over to the Eames Dryden Flight Research Center at Edwards Air Base. This aircraft was modified to study the influence of the movement of vortex flows along the wing. To do this, millions of tiny holes were made by laser on the experimental titanium part of the left wing (the so-called gloves) (about 2500 holes per square inch, only half a square meter of holes).

The purpose of this device, designed and built by the Rockwell International's North American Aircraft Division, was to hold (by active suction) the boundary layer of air, ensuring its laminar flow. This turbulent air layer, which is usually formed on the surface of the wing, adversely affects the flight characteristics, causing increased resistance and fuel consumption. By removing the turbulent layer of air, the laminar flow touches the surface of the wing, creating much less resistance. NASA's improvement in laminar flow began in 1926, when NASA's predecessor, the National Aeronautical Advisory Committee (NACA), photographed the wind turbulence of the wind tunnel at its Langley research center in Hampton, Virginia. Smoke was introduced into the air stream and photographed, showing visual signs of turbulence on the upper surface of the wing. 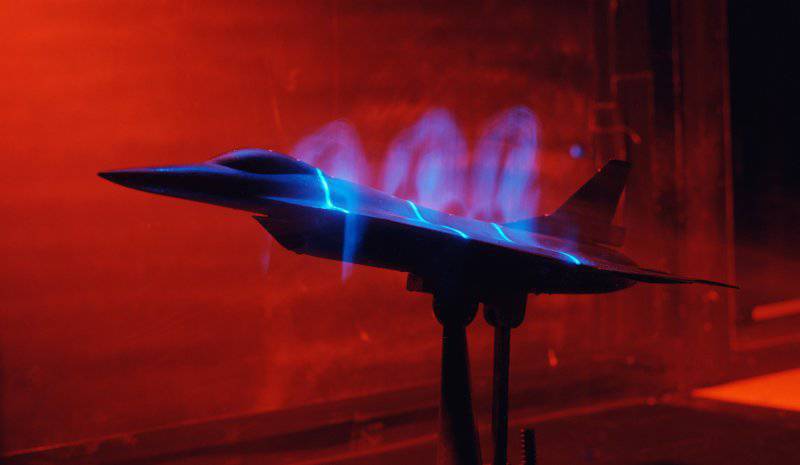 The first flight with a new wing took place on 3 on May 1990 of the year, the plane was operated by the pilot Steve Ishmael (Steve Ishmael). In January, 1995, he conducted a series of speed tests with NASA SR-71 aircraft. The aircraft were used to study the characteristics of the sonic boom in the program of creating a supersonic passenger aircraft. The speed during these test flights ranged from Mach 1.25 to Mach 1.8. During the flight, engineers recorded how atmospheric conditions affect sound shocks. 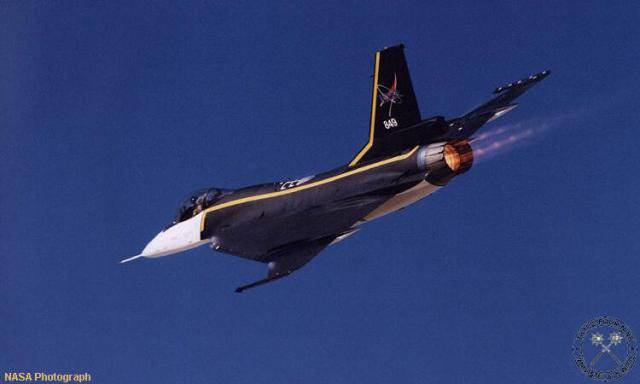 Later, board number one was handed over to NASA in Langley, Va., Where he entered the flight test program in order to improve flight performance during takeoff and reduce engine noise. It was painted black with yellow stripes and a white front fuselage. Aircraft number 849 returned to Edwards Air Base in 1995 year, where he took part in the study of sound beats in conjunction with SR-71A. 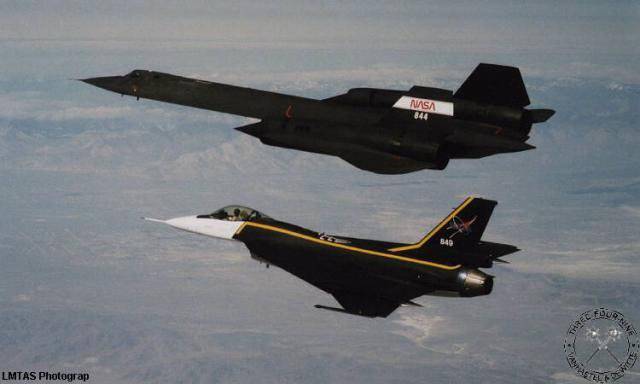 The second F-16XL (two-seater) was delivered to NASA with an experimental engine that had to be replaced before the flight test began. NASA acquired the General Electric F110-129 engine with surprisingly good performance. The 1.1 Max supersonic cruising speed was accidentally reached at the beginning of the program at an altitude of 6000 meters. Passive “gloves” (foam and fiberglass skirt) were installed on the right wing to study the aerodynamic characteristics along the leading edge at supersonic speeds, noise and pressure. A new active fairing (twice the size of the previous aircraft installed) made of foam and fiberglass fairing around a high-tech composite section with a porous titanium cover was installed on the left wing. Despite the asymmetry of the wings, the plane was easy to fly. 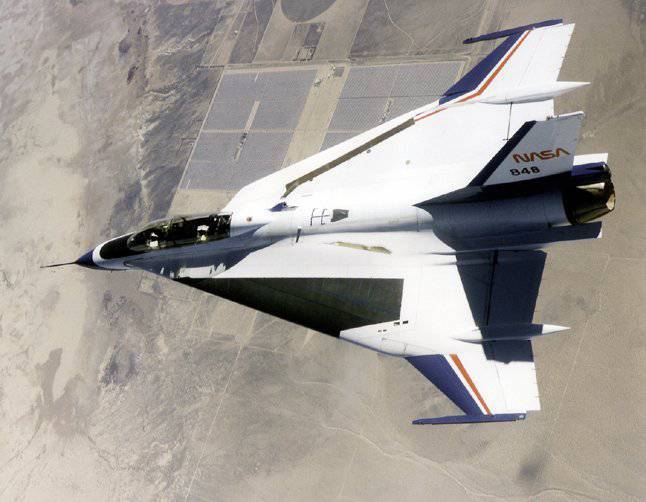 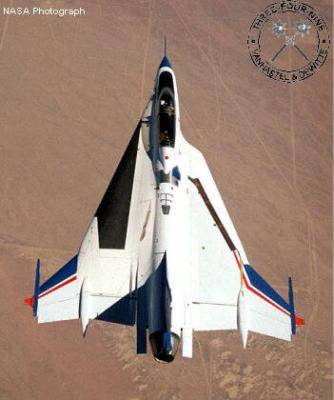 The fairing has a maximum thickness of 63 mm and covers 75% of the wing surface and 60% of its leading edge. The S-shaped contour of the wing was extended along the left side straight forward to more closely match the proposed wing shape of the supersonic passenger aircraft. The active region (medium 66% of fairing) has at least 2500 laser holes and covers at least 0.9 square meters. Holes lead to 20 cavities under the surface of the wing used to control the suction on the surface of the wing. The fairing is glued to the skin itself with epoxy resins. After the paint was removed from the aircraft, a couple of layers of fiberglass were applied to the composite casing, acting as protection of the skin when dismounting the fairing. Currently, this aircraft is used as a test bench in a research project of a supersonic laminar flow. 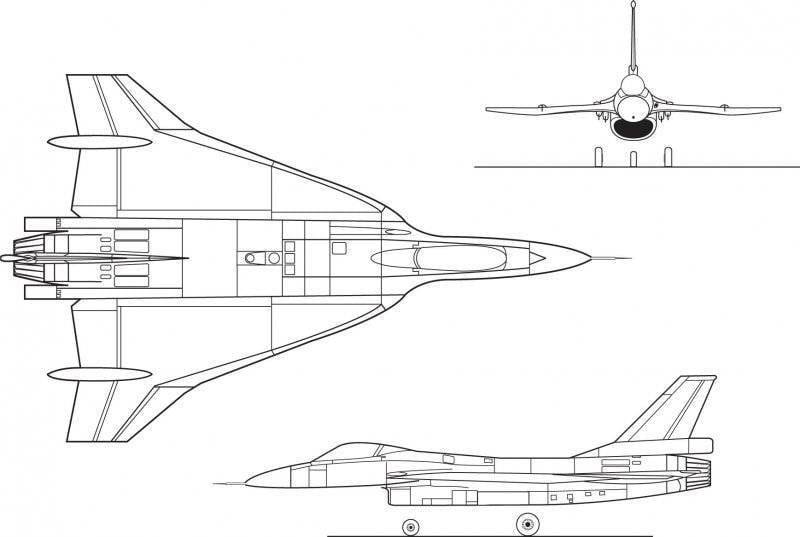 Ctrl Enter
Noticed a mistake Highlight text and press. Ctrl + Enter
We are
Observation vedts CIA. Lockheed A-12 Supersonic Strategic ScoutAn-12 in Afghanistan
7 comments
Information
Dear reader, to leave comments on the publication, you must to register.