8 May 2013
9
In modern conditions, given the growth in the cost of military equipment, early field repair is becoming one of the highest priorities. For timely repair of damaged military equipment, armored repair and recovery vehicles (BREM) of various models are used. Currently, the main type of such equipment in the Russian armed forces, intended for repair tanks, is an ARV-1, created on the basis of the T-72 tank. These machines have characteristics that are acceptable for fulfilling the tasks set for them, but at the same time, under certain conditions, they can create some problems in the supply area.


A few decades ago, a specific situation developed in the army of the Soviet Union, in which three types of tanks and a large number of their modifications were simultaneously in service with the armament. The lack of unification of the existing tanks made it difficult for the supply services and increased the total cost of operating the armored vehicle fleet. This situation was somewhat complicated by the fact that a large number of repair units equipped with BREM-1 machines had to work with tank units that were armed with T-64 or T-80 tanks. This greatly complicated the logistics of the supply of spare parts, since tanks and repair vehicles could not use the same units. 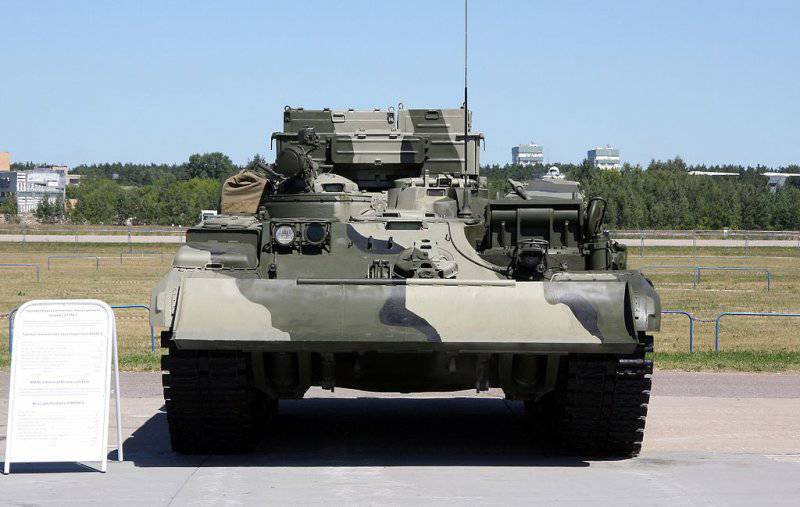 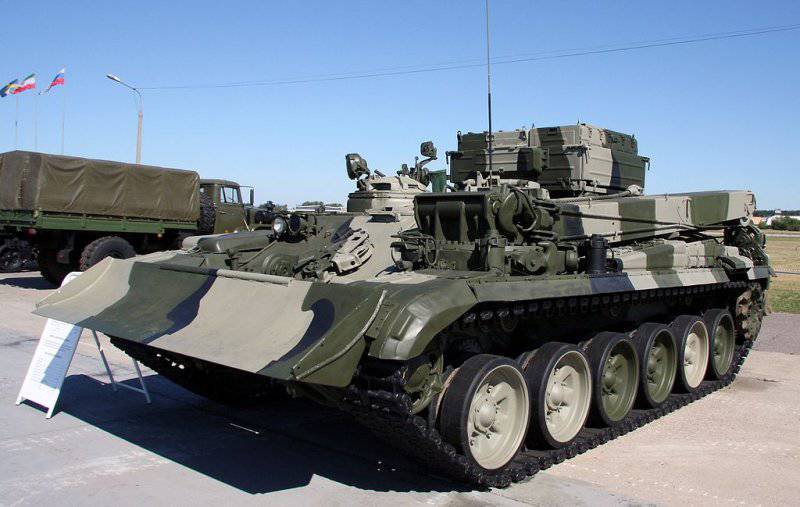 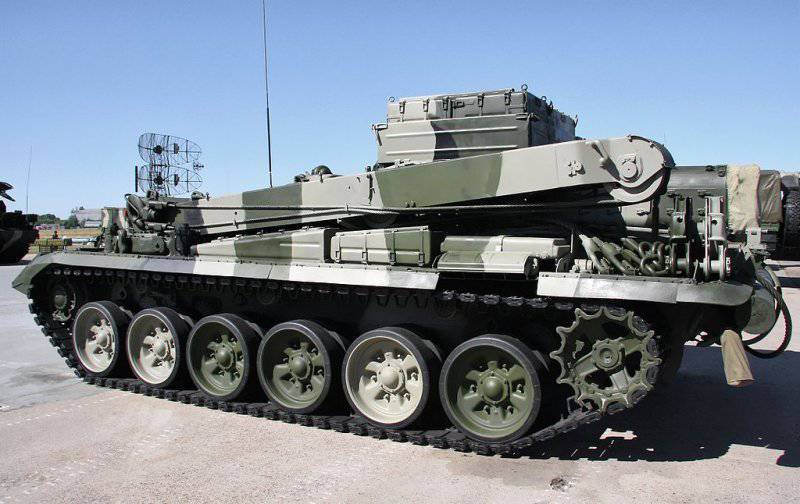 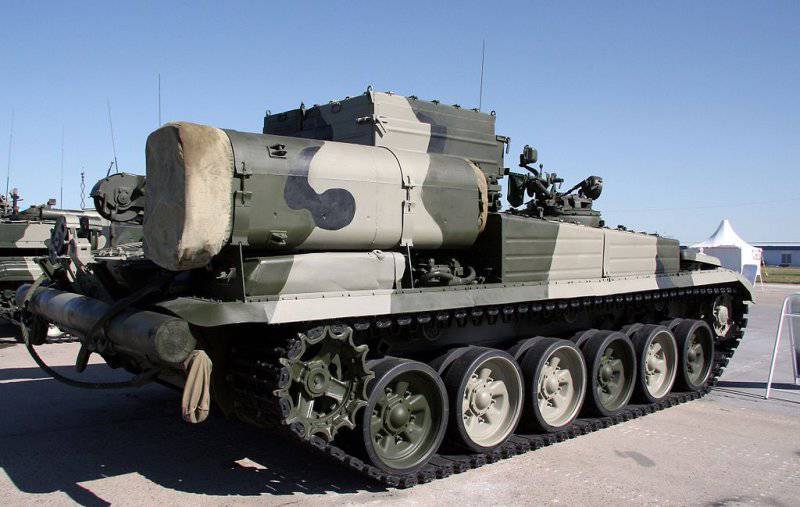 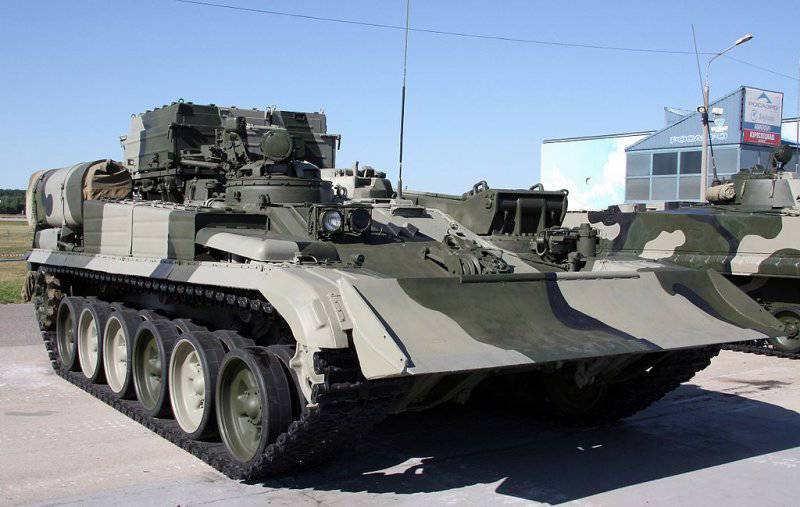 In 1997, the Omsk Transport Engineering Design Bureau and the Omsktransmash plant, engaged in the production of T-80U tanks, on their own initiative, began the development of a new armored repair and recovery vehicle. It was assumed that the creation and mass production of new BREM on the basis of the T-80U tank would facilitate the supply of repair units and, as a result, make it more convenient to operate the T-80 family of tanks. Separately, it is worth noting the time frame for developing a new car. Work began in January 1997, and they were given only six months. The prototype of the new BREM was supposed to be shown at the next exhibition, VTTV-97.

Because of such short deadlines, the draft design of the new car took just a couple of weeks. The task confronting Omsk designers was at the same time both simple and complex. The work was facilitated by the requirements of maximum unification with the T-80U tank. At the same time, it was necessary to place a set of special equipment on the base tank chassis, which cannot be called usual for tanks. As a result, we had to solve a lot of questions, first of all, of a layout nature. In the design of the new machine, called BREM-80U, computer systems were widely used, due to which some processes were accelerated.

The base chassis in the form of an armored hull of the T-80U tank identified the main characteristics of the BREM-80U. The total weight of the machine with containers for parts, etc. is equal to 45 tons, which is slightly less than the combat mass of the base tank. The power plant with a gas turbine engine GTD-1000F or GTD-1250 with power 1000 or 1250 hp remains the same. respectively. Mechanical transmission and tracked propulsion BREM-80U completely repeat the corresponding units of the original tank. Therefore, the repair and recovery vehicle is able to follow the tanks on the battlefield and fully work in the same conditions as they.

Significant changes have undergone the upper part of the armored hull. Instead of frontal armor and a roof on the chassis of the T-80U, a large armored log cabin was provided, inside which the crew and part of the target equipment are located. The wheelhouse is located on the site of the department of management and combat department of the tank. Because of it, the height of the armored vehicle increased by about 400 millimeters compared with the base tank. The armor plates of the welded hull withstand hitting small-caliber artillery shells in a frontal projection and bullets or fragments from other angles. All units of special equipment, located outside the body, are also equipped with their own armored jackets.

Inside the cabin there are places for the driver, commander, mechanic and welder. It is noteworthy that all hatches and optical devices are placed on the roof of the armored vehicle. The driver’s workplace was redone accordingly. If necessary, one more specialist may be included in the crew of the BREM-80U, depending on the planned work. For him, inside the body has a separate seat. Behind the crew’s armored cabin there is a cargo platform designed for the installation of containers with spare parts, tools, etc. Immediately behind the platform is a large intake unit of a gas turbine engine.

In the event of a collision with an enemy BREM-80U has some weapons, designed exclusively for self-defense. This is an open turret with a heavy machine gun NSV-12,7 or Kord and 1800 ammunition rounds of ammunition, as well as eight 902B Tucha smoke grenade launchers. In addition, there are four AX74U automatic rifles with several magazines, a flare gun with rockets and a number of fragmentation grenades. it weapon intended for self-defense crew who left his armored vehicle.

In the stowed position, the most prominent element of the special equipment of the BREM-80U machine is the coulter-blade of the bulldozer type. The 3,3 meter-wide blade can be buried in the ground at 400-450 mm, which allows it to be used for self-digging or for preparing positions for other equipment. In addition, the blade has another function: when working with crane equipment or when using the main winch, it plays the role of an outrigger, not allowing the repair and evacuation machine to turn over or move.

For the evacuation of stuck or inverted armored vehicles BREM-80U is equipped with two winches, the main and auxiliary. The main traction winch with a hydraulic drive provides traction up to 35 tons-force. When using a chain hoist, this parameter is increased to 140 tf. There is an 160 meter of steel cable on the drum of the winch. The latter is issued at a speed of 50 meters per minute. Winding the cable, depending on the need, is made at one of two speeds: 16 or 50 meters per minute. The traction winch is located inside the armored hull, its cable is pulled out through a hole in the front armor plate. The auxiliary winch is much weaker and provides a force of only one ton-force. Less effort is compensated for by the greater winding speed of the cable - from 60 to 80 meters per minute. At the same time on the drum auxiliary winch fits up to 330 meters of relatively thin cable.

After the damaged armored vehicle is put on tracks or pulled out on solid ground, the BREM-80U can take it in tow. For this purpose, a semi-rigid towing device with two rods is provided in its stern. The capabilities of this device and the power plant of the repair and recovery vehicle are sufficient for towing all tanks and heavy armored vehicles in service, including those with damage to the undercarriage.

The equipment of the machine BREM-80U allows in the field conditions to carry out some types of small and medium repair of armored vehicles. Thus, with the help of a cargo crane, an armored repair and recovery vehicle is capable of dismantling a tank turret or changing an engine. The rotary jib crane is mounted in the front left part of the BREM, its boom in the stowed position is placed along the body. Normal lifting capacity - 18 tons. When using a chain hoist, it increases to 25 tons. The mechanisms of the crane allow the boom to be turned in any direction, however, the maximum load moment is ensured only in the position of the boom in which it is directed forward relative to the body of the machine and is in a sector of width 60 °. In this case, the load moment reaches 69 TC. In other cases, the crane is able to provide only up to 50 ton-forces.

Boom reach is adjustable from 2,1 to 4,7 meter. From this parameter directly depends on the maximum lifting height of the crane hook. So, with the smallest reach, the hook rises to a height of six meters from the ground, with the largest - only 3,6 meters. The hydraulic winch of the crane ensures the issuance and winding of a cable at a speed of the order of 2,5-2,8 meters per minute. It is noteworthy that the new crane of the repair-evacuation machine BREM-80U has one and a half times greater loading capacity in comparison with the crane BREM-1. In addition, the parameters of boom removal and load lifting are noticeably larger. Thus, the new Omsk development machine has greater capabilities than the old BREM based on T-72.

Finally, an electric welding machine powered by a separate generator is part of the target equipment BREM-80U. The welding current of the apparatus can be continuously adjusted up to 300 amps. The generator of welding equipment is driven by an auxiliary gas turbine powerplant GTA-18A.

All winches and crane mechanisms BREM-80U have hydraulic actuators. The nominal pressure in the hydraulic system in 200 kgf / sq. Cm. supported by three axial piston pumps. If necessary, you can increase the pressure to 280 kgf / sq. Cm. An interesting feature of the hydraulics of the repair and recovery vehicle is the distribution of pumps: two are used in conjunction with the drive of the main winch, and the third ensures the operation of all other hydraulic units. The pumps themselves are driven from the main engine through a power take-off shaft. The aggregates of the target equipment are connected with five hydraulic motors (a drive for turning and a crane winch, as well as drives for the main and auxiliary winches) and four hydraulic cylinders (lifting boom cylinders and a coulter-dump drive).

The engineers of the Omsk Transport Engineering Design Bureau met the deadlines for the preparation of the project, so that the first copy of the BREM-80U was assembled by the beginning of the exhibition VTTV-97. Since then, a new armored repair and recovery vehicle is regularly demonstrated at various salons and collects positive feedback from the public. However, the mass production of machines for delivery to customers began only at the end of the two thousandth. The first and, as far as is known, Cyprus was the last customer of vehicles based on the T-80 tank. In the mid-nineties, this country acquired several dozen T-80 tanks from Russia, and in 2009, it signed a new contract, according to which last year a batch of tanks and repair-evacuation vehicles were handed over to the customer.

There is no information about the purchase of BREM-80U by the Russian Ministry of Defense. Probably, the purchase of this technology was considered inexpedient. For technical reasons, most of the T-80 family of tanks are currently in storage and in the coming years are likely to be decommissioned and disposed of. Because of this, the purchase and operation of another type of repair and recovery equipment, unified with tanks, the future of which looks ambiguous, is unlikely to produce the expected effect. Therefore, BREM-80U most likely will remain an exhibition sample with some export potential. 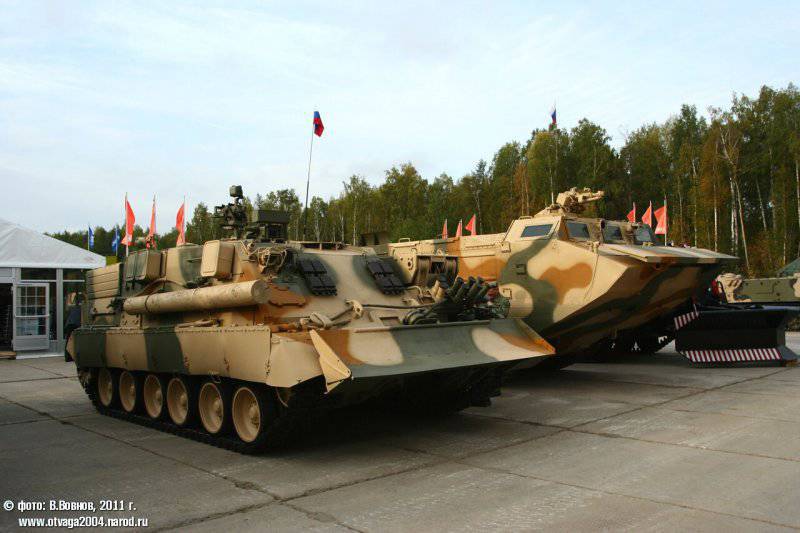 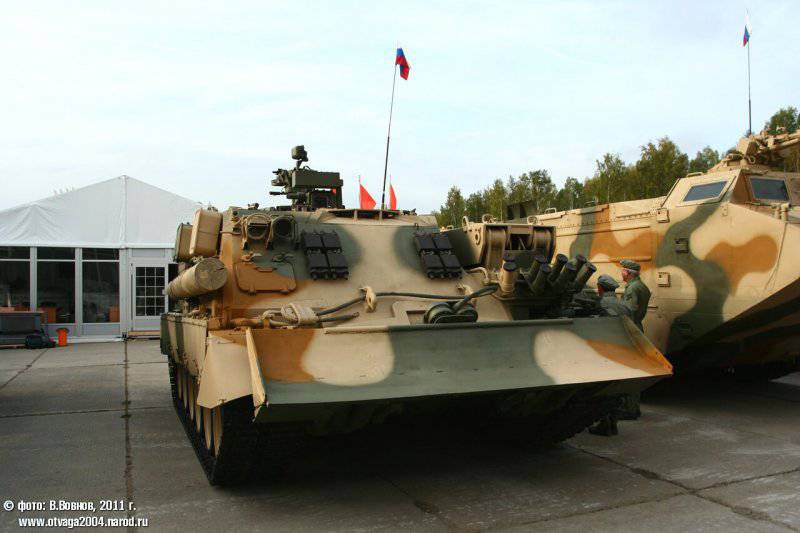 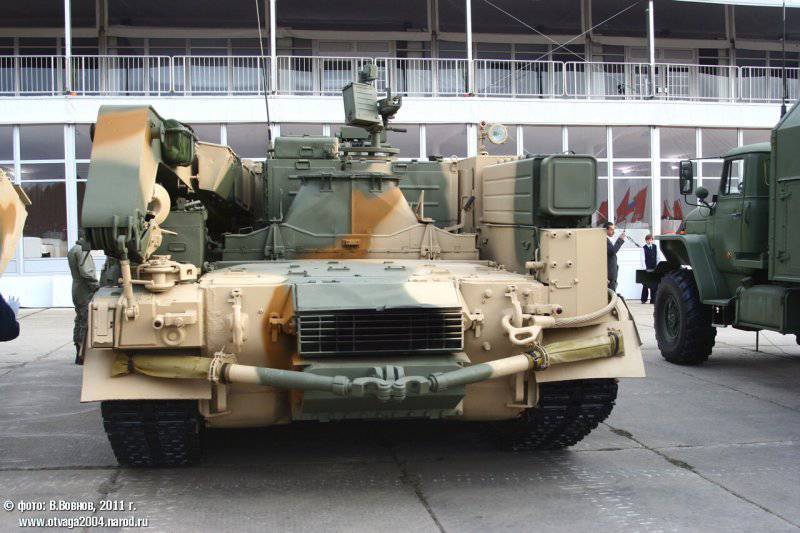 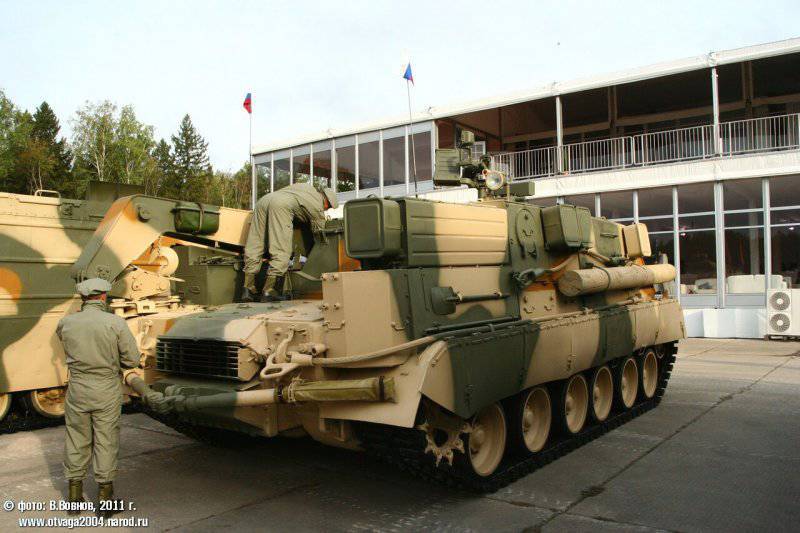 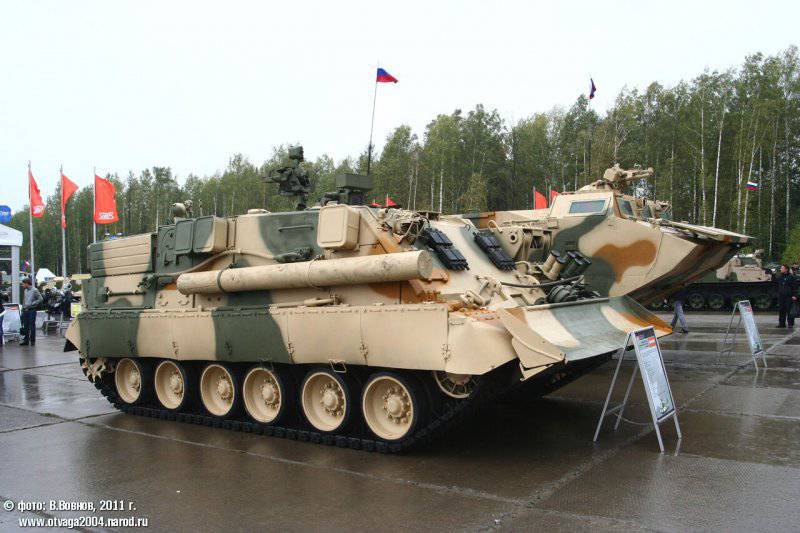 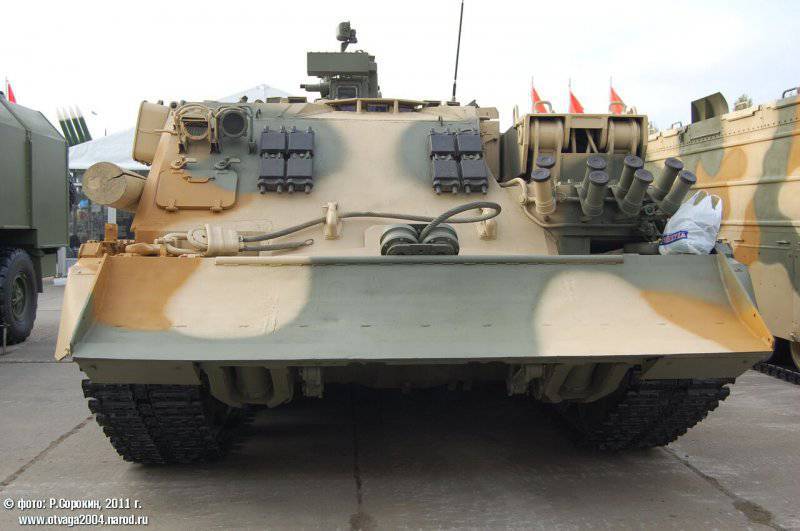 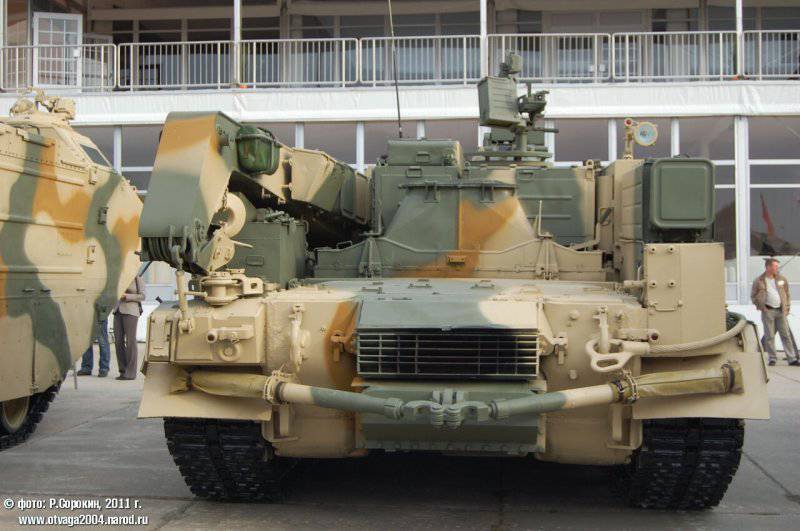 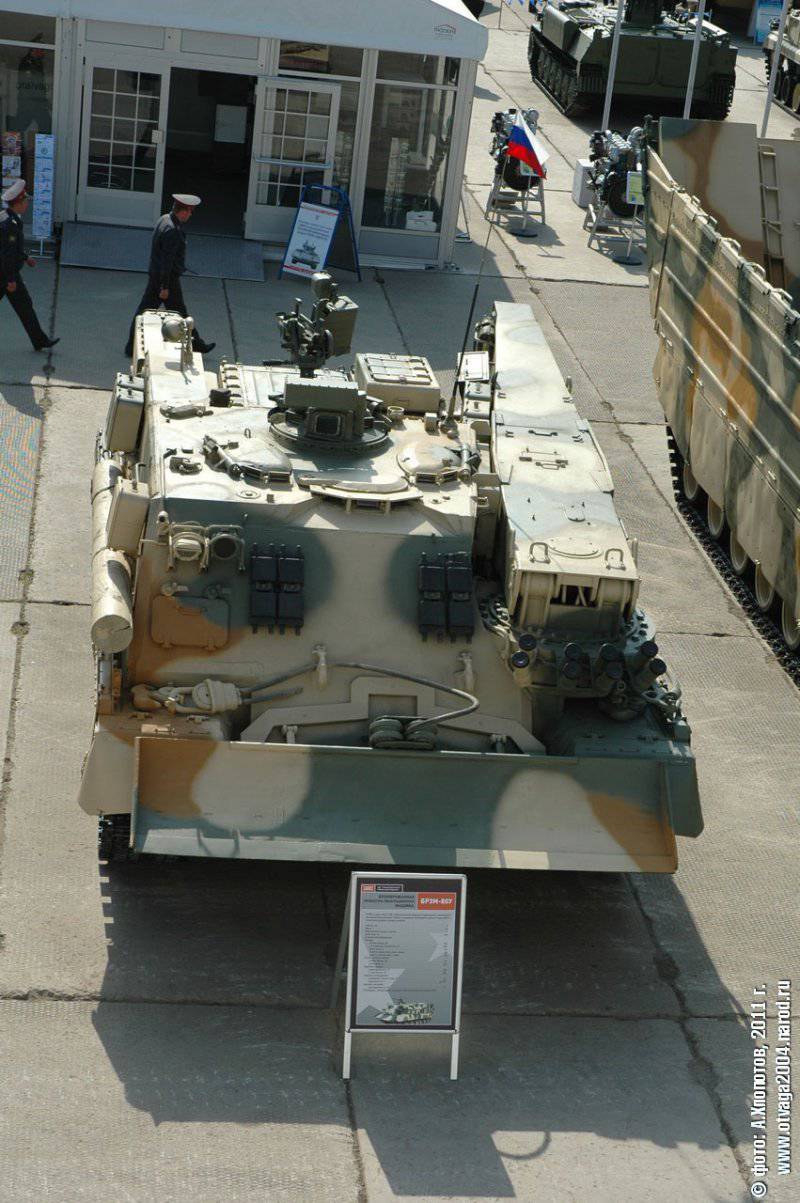 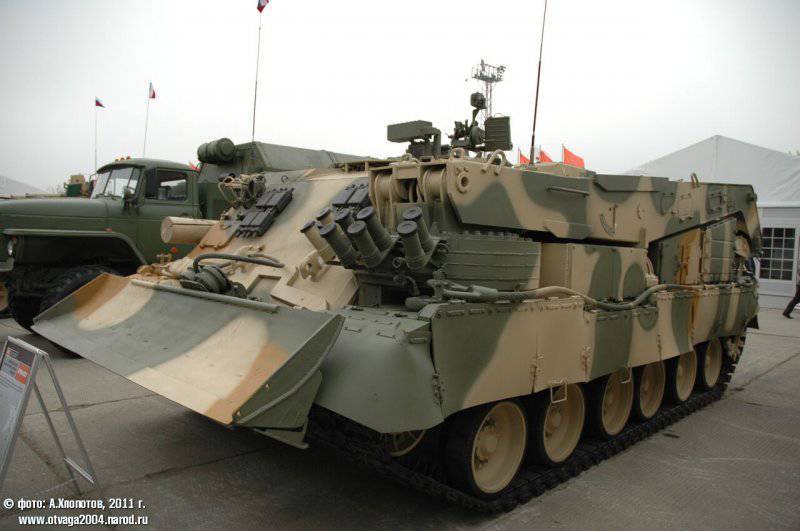 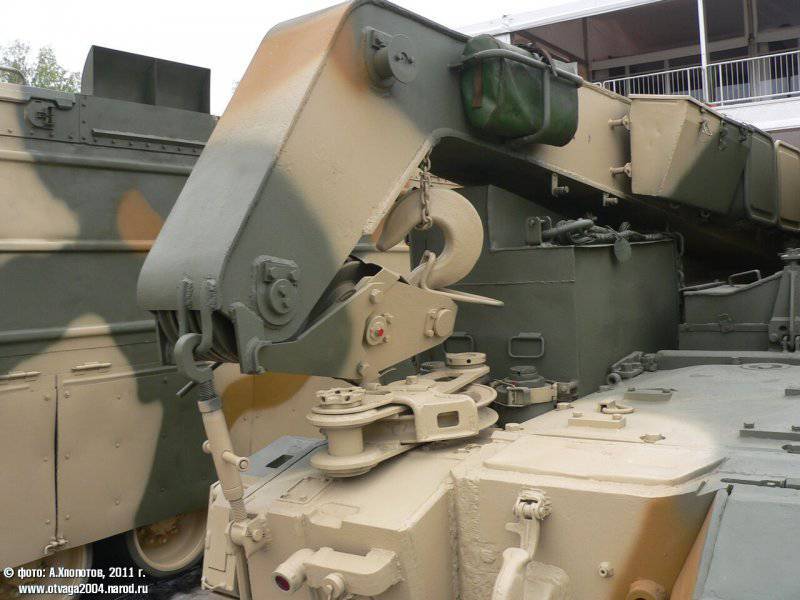