Features of food for astronauts 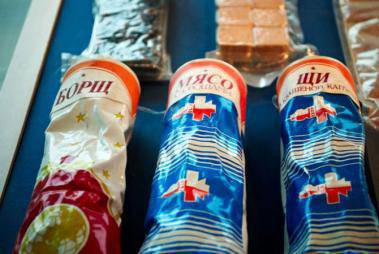 In childhood, every Soviet boy dreamed of becoming an astronaut. And only one in a million had such a dream come true. One of the main barriers that stood in the way of those who wished to conquer outer space was the most severe medical commission. Even experienced pilots were sometimes expelled from space brigades only for the fact that they had increased or decreased pressure above (below) normal limits. The main slogan for those who continued to strive to become a space explorer looked and continues to look like this: Take your health to a whole new level! To achieve this new level, whole scientific systems were developed. They concerned not only a certain set of physical activities, but also the correct “space” diet.


It was even more difficult to create a nutrient complex for those people who had already fallen into space groups and had to be sent to near-Earth space. The development of power for astronauts involved entire institutions, whose work today can not be overestimated. If we consider space nutrition today, we can single out several of its main features. One of these features is the sublimation of products. This term refers to the transformation of a solid into a gaseous, and then again into its initial stage. Such a process is used not only to destroy all the harmful bacteria that are contained in raw food, but also to reduce the volume of this food. Indeed, on a spacecraft, saving literally every square centimeter is important. Yes, and in the mass, the product loses after sublimation processing, since a large percentage of excess moisture evaporates from it. This ultimately leads to a reduction in the mass of fuel that can be used to transport the space menu onboard the ISS.

Since Soviet times, many have become accustomed to seeing tubes with the words “chicken cutlets” or “roast with cabbage” as cosmic food. Today cosmonauts use only sauces in tubes. All other dishes are packed mainly in plastic containers. Plastic reduces the weight of the container with food, which is also used in order to save. But it should be noted that special banks are often loaded on board the spacecraft. They must be stored food, which is designed for a long stay on board.

Bread on a spaceship is a separate conversation. It is shaped like the same loaves that can be bought at a regular bakery, only the size of these loaves is about 20-25 times smaller than normal. Why spend so much time packing 100 mini-loaves if you can pack normal 5 rolls instead of this number? The answer is: the astronauts immediately put the mini-loaves in their mouths and chew carefully. If they were dealing with large loaves, it would inevitably lead to crumbs on board. But cleaning on board the spacecraft is a special thing. Try to catch a few crumbs flying along the ISS, if the state of weightlessness throws you from side to side.
Ctrl Enter
Noticed a mistake Highlight text and press. Ctrl + Enter
We are
Not a single satellite escapes from the “System of Control of Outer Space”Space systems of the US military communications: analysis of the state and development
4 comments
Information
Dear reader, to leave comments on the publication, you must to register.