8 May 2013
27
In the article about arrow-shaped bullets, Ascorius’s sniper rifle was mentioned, which is a prototype weaponsdeveloped by Ukrainian designers. Despite the fact that the weapon officially remained only a prototype, there is information that this rifle was lit up in recent military conflicts, and even there are witnesses who saw this weapon live in the form of trophies. We will not rant about whether this weapon took part somewhere or not and whose side its trunk was facing, since the topic is quite slippery, but it’s necessary to figure out what kind of animal it is and what it is better or worse than the more usual patterns. 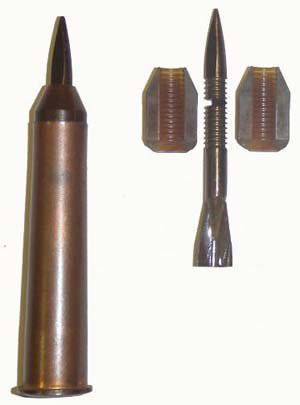 The main feature of the weapon, of course, is the ammunition. The funniest thing is that it is not known exactly what kind of ammunition is used in weapons, in most sources the information is very diverse, which backwards proves the “experimental” nature of this weapon. Apparently, the designers simply did not finally decide on the ammunition, which was to become the main weapon. Nevertheless, the cartridge that was developed by Dvoryaninov and Shiryaev in the 60 of the last century is most often mentioned. This cartridge had a total length of 124 millimeters and a weight of 47 grams. The cartridge case has a flange; the caliber of the boom compression elements is equal to 13,2 millimeters. The weight of the boom together with the caliber-increasing elements is 17,5 grams. The initial boom speed is about one and a half kilometers per second.

A notable feature is that the boom caliber increases not at the expense of plastic, but at the expense of the usual lead bullet in the shell, which has an opening for the boom in the center and is divided along two equal parts. Due to this, it was possible to use a rifled barrel without the risk of disrupting the projectile with rifling at a sufficiently high speed. In order for the arrow itself not to move inside the bullet, there are annular grooves on the arrow itself and the protrusions inside the divided bullet, thus, the arrow is securely fixed and its stall is excluded. After the missile projectile leaves the barrel of the weapon, the caliber-increasing elements are separated from the boom and just fall to the ground, while the boom itself continues to fly to the target at a sufficiently high speed, while having a huge direct shot range.

Having a huge flight speed, such an arrow is excellent for hitting moving targets, and the shooter can have minimal experience with such weapons for a successful hit, while in the hands of an experienced shooter a weapon with such speeds of projectile becomes a reliable and reliable means of hitting the enemy. It’s easy to imagine what a wound like an arrow would look like, but even this when designing an ammunition turned out to be small, the arrow has an incision on its body, which does not affect ballistics due to the high speed of movement, but if it hits even on an unprotected target, it causes the arrow to deform, turning the place of hitting literally mince.

But not shooting at the enemy's manpower is the main objective of weapons for such ammunition - too expensive a pleasure to shoot. Most often, such ammunition and weapons for them are developed for firing on lightly armored vehicles, how effectively this can be judged from the following results. At a distance of 600 meters, an arrow fired from the barrel of an Ascoria rifle pierces a steel sheet 50 mm thick. Well, now about the weapon itself. 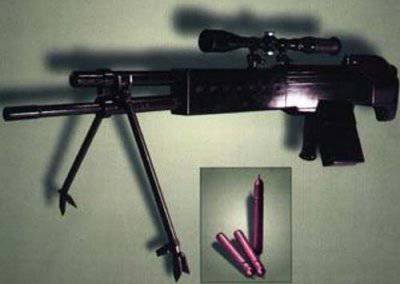 The Ascoria sniper rifle is a sample made not quite in the usual layout. The weapon shop is located in the same place as the handle at an angle, which made it possible to reduce the length of the weapon and at the same time not cause inconvenience when shooting or reloading a rifle. True, this increased the thickness of the rifle, but, in my opinion, for this type of weapon it is not so critical. Much more interesting is that the weapon had the weight of the entire 7 kilogram, with the length of 1165 millimeters. In other words, such a sample can easily be carried by one person, and you can deliver a weapon wherever a person thinks of climbing. However, it was not without negative moments. The kinetic energy of the projectile is about 19,5 kJ, which creates significant returns when firing, and under the condition of a small weapon weight, such recoil becomes just an unbearable gunner. Apparently, some kind of trick is used to compensate for recoil when shooting, but that is not reliably known. The rifle is self-loading, automatics is built according to the scheme with removal of powder gases from the barrel bore; it is powered from detachable box magazines with a capacity from 5 to 10 cartridges.

It’s not hard to imagine what advantage a small squad will get with the support of a sniper armed with such weapons, here is the fight against lightly armored vehicles and the defeat of enemy personnel, but it all comes down to the cost of producing such ammunition, well, at least according to the official version. In my opinion, the real cost of such ammunition with arrow-shaped bullet is greatly exaggerated and with sufficient initial investment of funds for mass production, the cost of cartridge with arrow-shaped bullet will hardly exceed the cost of a conventional rifle cartridge more than doubled.

Ctrl Enter
Noticed a mistake Highlight text and press. Ctrl + Enter
We are
6X49 cartridge and SVK, SVK-S, TKB-0145K sniper riflesWhat should be a modern sniper (part of 1)
27 comments
Ad