The younger sister of the machine gun "Cord" 6С8 or ASVK

14 May 2013
29
For most people, the Cord is associated with a heavy machine gun. However, not only the machine gun was created by the Degtyarev Kovrov Orozheyniki, in addition to it there is also a large-caliber sniper rifle known as ASVK DIA "Kord" or simply 6X8. Let's try to get to know this. weapons in more detail, well, comparable with the fact that there is a potential opponent.

The basis for the large-caliber sniper rifle of ASVK was the previous work of the designers Zhuravlev, Kuchin, Negrulenko and Ovchinnikov, namely, the SWR-SVN-98 CWS. This rifle is made in the layout of bullpup to reduce the overall length of the weapon, it is powered from a detachable box magazine with a capacity of 5 cartridges. Constructed a weapon with a sliding bolt locking the barrel when turning. A distinctive feature of this CWS was the high rack, on which the open sights were installed, it also serves as a handle for carrying weapons. The optical sight is mounted on the side mounting plate, while the handle with open sights is folded, which indicates a low efficiency of the rear sight and front sight. In addition, the length of the stand is very short, because the distance between the whole and the front sight is small, which makes it very difficult to use a weapon without optics at distances over 400-500 meters, but this is better than nothing, because optics are fragile and when damaged it is a weapon that does not have other aiming weapons. fixtures, just become useless.

In addition to the high-quality barrel and good quality ammunition for accurate shooting, the recoil of the weapon is also an important point. Agree, it is difficult to shoot normally when the shooter at the subconscious level is afraid that the weapon will kick him during the shot. It was decided to fight recoil when shooting with already proven methods, without introducing complex recoil damping systems into the design. So provides comfortable shooting muzzle brake-recoil compensator and the back of the foam rubber. It is the muzzle brake of the weapon that is the main distinguishing feature of the SVN-98 from ASVK. The muzzle brake is cylindrical, has many holes directed at an angle away from the target, which ensures braking of the weapon during a shot and, as a result, reduces recoil when firing. 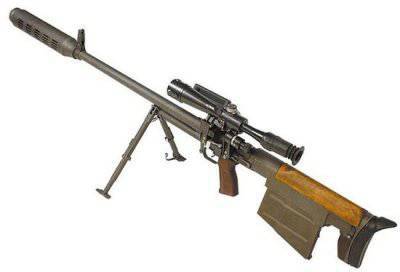 As a result of the work of the designers, a weapon with a barrel of a meter length, a total length of 1350 millimeters and a weight in 11 a kilogram without an optical sight and cartridges, turned out. However, some points in the weapon could be improved, so that the weapon continued to develop.

First of all, it was decided to abandon the open sights on the folding arm. To increase the effective fire of the weapon, the front sight and the rear sight were smashed to a far distance and they began to be attached to the muzzle brake and on the receiver, and the front sight was folded back. Separately, it is worth noting the completely redesigned muzzle brake-compensator of recoil, but more importantly, the barrel of the Kord machine gun and the sniper rifle were now made from the same blanks and the same technological process, which significantly reduced production costs, however, to assert that trunks are the same in any case impossible.
The length of the rifle barrel remained the same - 1000 millimeters, but the total length has grown to 1400 millimeters. Accordingly, the weight of the weapon has increased to 12 kilogram. The rifle feeds all of the same box-shaped single-row magazines with a capacity of 5 cartridges. The initial bullet speed is 850 meters per second. Dispersion over a distance of 300 meters when using machine-gun cartridges is 16 centimeters, at least, the manufacturer claims. 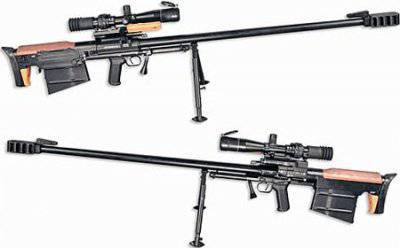 It is rather difficult to give a characteristic to domestic weapons without prejudice, but in this case one cannot fail to note that the CWS under consideration somewhat loses to foreign counterparts in its accuracy, even when using high-quality ammunition. But at the same time, you shouldn’t forget what goal was set before the designers, because no one planned to create high-precision weapons. This large-caliber rifle is designed to apply it where the use of large-caliber machine guns is impossible because of its size and weight. In other words, this SWR is designed to defeat opponents in personal protective equipment and behind coverings at distances of a maximum of 1500 meters with good luck, and not to shoot a squirrel in the eye for 2000 meters. After all, domestic sniper 12,7 is far from such sniper, as we would like, that also should be considered.

Summarizing everything written above, it should be noted that when considering this large-caliber rifle separately from the machine gun it can hardly stand out from the total mass of such weapons, but when we consider both the CWS and the Kord machine gun together, then there is already something to boast about. You can say that a rifle and a machine gun are a kind of complex complementing and partially replacing each other, because wherever you can’t carry a heavy machine gun, you can easily deliver a light CWS behind your back. In addition, the rifle can also be used as a weapon for specifying targets for machine gun design. In general, the weapon turned out really necessary and claimed. Let the rifle is not as accurate as we would like, but it copes with its tasks perfectly. Well, the fact that no one puts records on the enemy’s distance from it is not necessary in most cases such extreme range of firing, and nobody measures the tape measure with the enemy with a successful hit, and it’s good. In other words, this large-caliber sniper rifle is the simplest weapon that is relatively cheap in production so that the state can pull it, and at the same time is quite effective and convenient.