The Russian army turned towards the robotic technology

4 May 2013
71
With the advent of the former Minister of Emergency Situations Sergey Shoigu as Minister of Defense, the military increasingly began to look to the future, in which the main role will be played by robotic systems of different classes. In this case, we are not talking only about banal UAVs or underwater robots. The Russian military is considering the use of autonomous landing systems and ground combat vehicles. The Airborne Forces is actively interested in inanimate assistants to military personnel and plans to include Tula KBP and Moscow in ambitious projects and programs aviation institute.


The fact that robotic technology in the Russian army should be used as often as possible, Sergei Shoigu said in December last year. 14 December 2012, the new head of EMERCOM of Russia Vladimir Puchkov and Defense Minister Sergei Shoigu visited the 294 th center for conducting special risk operations “Leader”. Here, the ministers examined a number of samples of robotic equipment that are used by Russian rescuers: the Yel-10 and Yel-4 fire-fighting complexes, as well as the LUF-60 remote mobile fire fighting complexes and various sappers. During the visit, Valery Gerasimov, Chief of the General Staff of the Armed Forces of Russia, suggested using systems of this kind in Chechnya.

One of the famous Russian sapper robots today is the mobile robotic complex (ISC) "Varan". RTOs are designed to conduct search, visual reconnaissance and primary diagnosis of suspicious objects for the presence of explosive devices using specialized attachments and television cameras. "Varan" is able to neutralize explosive devices, as well as load them into specialized evacuation containers and perform various technological operations aimed at providing access to the VU. 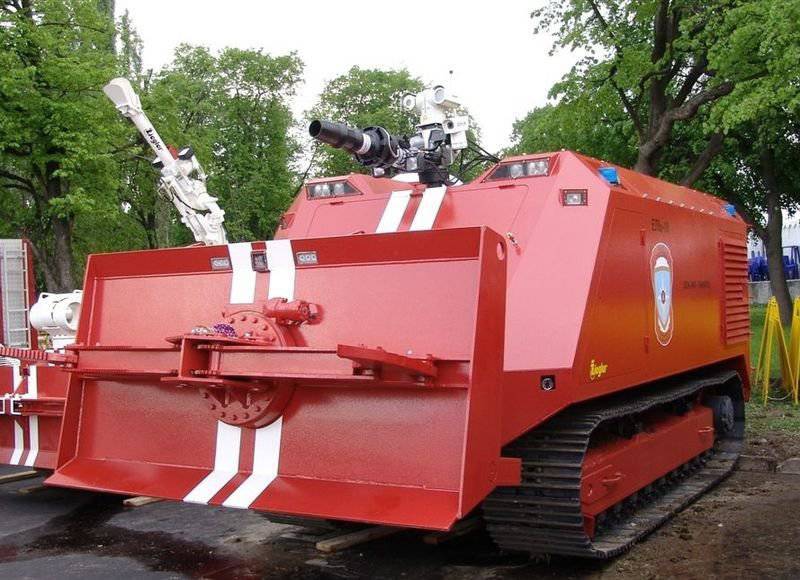 Fire-fighting robotic complex El-10
First of all, these robots are aimed at combating terrorism; therefore, they are mainly purchased by the Ministry of Internal Affairs, the FSB and the Emergencies Ministry of Russia. Kovrov Electromechanical Plant is engaged in the production of a sapper robot. Robots of this type are able to clear mines of VU at a distance of 2 kilometers, it can detect it in a car, under a car, and also evacuate a car from a tunnel after an accident. The cost of this kind of technology is about 50 thousand dollars. At the same time, a sapper robot is not just a unit on a caterpillar or wheeled course, it is a whole set of equipment that includes various replaceable mounted devices and manipulators, a control panel, a set of consumable materials and spare parts. The cost of fully equipped Russian robots corresponds to the prices of Western analogues, which often still have to buy additional equipment.

Shortly after the excursion to the center for conducting operations of special risk "Leader", the Russian military started talking about the need to use robots to solve various kinds of tasks. Representatives of the Ministry of Emergency Situations agree with them, according to Irek Khasanov, the head of the fire prevention center, the equipment that is already in service with the Ministry of Emergency Situations will be useful in the army.

Expressed on the use of robots and commanders of various types of troops. Since the Navy is interested in autonomous uninhabited underwater vehicles, the Ground Forces are about to begin the widespread use of reconnaissance UAVs. In this case, the most promising and breakthrough ideas expressed by the commander of the Airborne Forces Vladimir Shamanov. The shaman is not going to be limited to the widespread use of UAVs, he proposes to create robotic airborne systems, as well as autonomous ground combat vehicles. Also, the Ministry of Defense of Russia has already made an order to create a robot to search and evacuate the wounded from the battlefield. 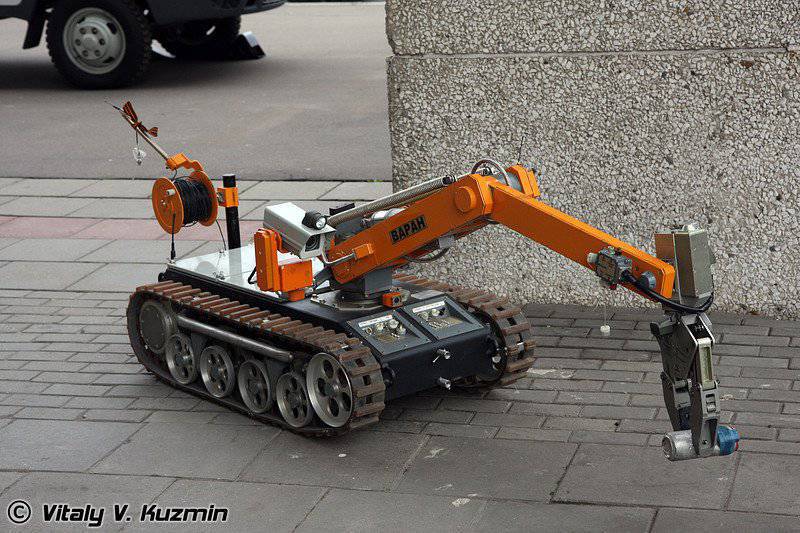 Robot Sapper Varan
The developments of such a rescue robot are reported in the report of the Public Council under the chairman of the Military Industrial Commission. This report is dedicated to the projects of the recently established Advanced Research Foundation. The created robotic complex should be taught to independently find, identify and remove wounded soldiers from the battlefield, as well as to move without problems in various types of terrain and soil, in rooms, as well as along stairs. At the same time, the manipulators of such a robot are planned to be adapted to work with the wounded, who received serious injuries and are in different poses. Transportation of the wounded must be carried out without the risk of causing them additional damage and harm to health.

The St. Petersburg Central Research Institute of Robotics and Technical Cybernetics, which is currently developing a control system for combat robots, can become the main executor of the sanitary robot project. Also among the possible developers call MGTU them. Bauman. In addition to the Russian Ministry of Defense, the new robot can be useful for the Emergencies Ministry units. Previously, advanced mobile reanimation technologies were presented in the Russian surgical complex, created on the basis of the Il-76MD Scalpel-MT transport aircraft. Currently, this aircraft is in service with the EMERCOM of Russia.

In the United States, the creation of a robot to evacuate wounded soldiers from the battlefield is the responsibility of DARPA - the Advanced Research and Development Administration of the US Department of Defense. Prior to that, the Russian Defense Ministry had already announced 2 a tender for the development of an ultrasound cuff to stop bleeding (cipher Bee) and an artificial liver (Prometheus cipher), but later canceled the two tenders. The Foundation for Advanced Studies was established in Russia on the initiative of Deputy Prime Minister Dmitry Rogozin, who oversees the defense industry. The fund was established in October last year and is positioned as the domestic equivalent of DARPA. Its main task is to promote high-risk research in the interests of national defense. 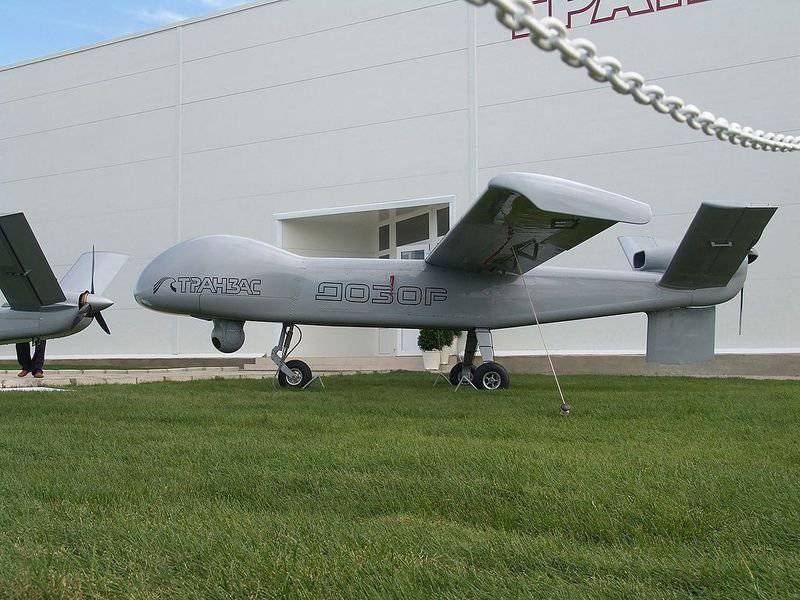 Intelligence-impact UAV Dozor-600
Returning to the Airborne Forces, it can be noted that in August 2012 of the year it was announced that the Airborne Forces together with the Tula KBP are going to develop a multifunctional complex with a remotely controlled module based on the machine - BMD-4М. It is assumed that this machine will be autonomous, and the operator will be able to control it from a considerable distance. To realize this idea is relatively easy, especially since Tula KBP is already engaged in the release of BMD-4M robotic combat modules. It is reported that 5 of such machines should go to the troops before the end of this year, and 5 in the 1 quarter of the 2014 of the year. In fact, the only thing that remains to be realized is a remote control system, as well as an all-view review.

The Airborne Forces also have their own vision of a promising airborne assault vehicle, which, according to Shamanov, should represent something between a medium-sized helicopter and a light armored vehicle. Such a machine must independently fly over a distance of 50-100 km, and due to the presence of folding wings, it can easily fit in the Russian Il-76 and An-124 transport planes. Nothing is known about the promising flying BMD.

Most likely, this project will simply not be implemented due to the overall lack of thought and complexity of the design. In the unmanned version, this combat vehicle will not make sense, since even the created UAVs can perform substantially more different tasks in the air. In the manned version, such a BMD can be an excellent target for ambush attacks: while it is transformed into a flight mode, it will spread its wings, spin the screws and gain altitude. 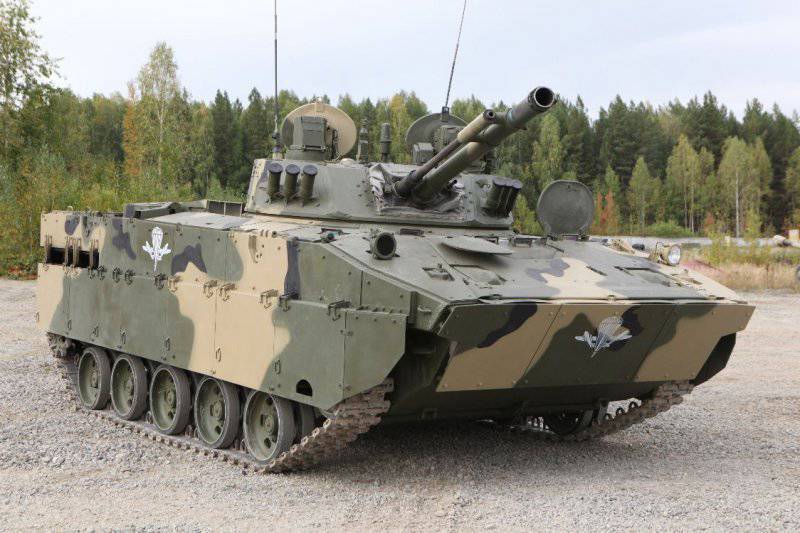 BMD-4M
In the air, such a machine can be very vulnerable to the enemy due to its large size and, most likely, mediocre maneuverability. The use of active systems and self-defense complexes will significantly complicate the design of the apparatus and may lead to an overestimation of the mass of BMD, which is highly undesirable for airborne forces. Finally, to control such a flying BMD, it is necessary to train highly skilled driver-mechanics who will be able to drive a car not only on the ground, but also to control it in the air.

In addition to the robotized combat vehicles, the airborne troops feel the need for landing robots, which can be used to solve a fairly wide range of tasks. In January, 2013, Colonel of the Airborne Forces, Alexander Kucherenko, said that he decided to equip the Russian paratroopers with Shamanov robotics using the example of the Russian Emergencies Ministry. In this case, robots for paratroopers should differ in smaller size and weight. What particular robots are still unknown, but most likely they are sappers, fire extinguishing and surveillance systems.

It is also not excluded that Russian paratroopers could be useful robots that are able to mark the landing sites. In America, UAVs are planned to be used for these needs. In March, the 2013 of the year in the United States has already tested precision guidance systems for transport aircraft. The essence of the systems lies in the fact that the reconnaissance UAV carries out an inspection of the terrain, choosing the places most suitable for transportation of paratroopers and cargoes and marking them with special radio-beaters. Such beacons transmit the exact coordinates of the landing site to the crews of the transport aircraft, and they can also broadcast information about the weather, first of all - the wind. These systems are used for the targeted discharge of cargo, such systems would be very useful for Russian paratroopers in the landing of military equipment, especially in adverse weather conditions. 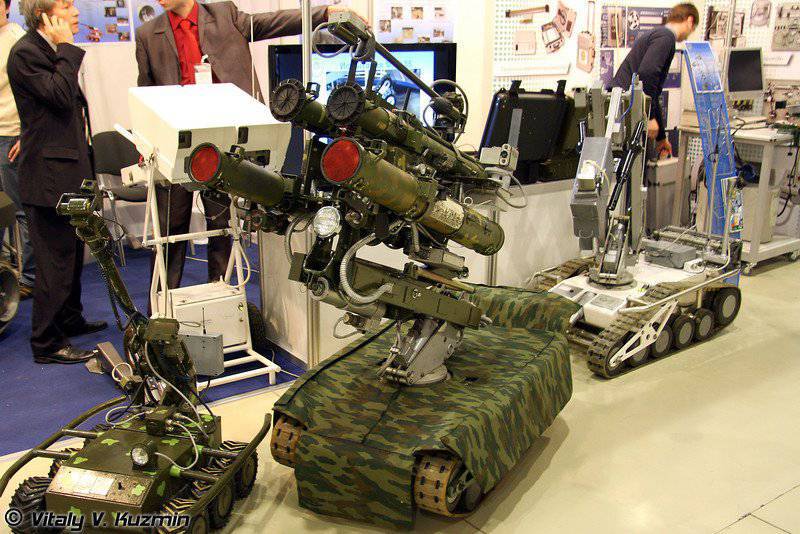 Combat robot MRK-27
A variety of robotic systems with each new day play an increasing role in the armies of the developed countries of the world, they become an integral part of the conduct of hostilities. These machines are able to perform a number of tasks with much greater accuracy, and also faster than humans. One or another degree of process automation has long been in demand in many operations. For example, in building an air defense (in a fully autonomous mode, a modern Russian C-400 air defense system can function) or reconnaissance. The most active in recent years, robotics used by the US Army: reconnaissance, air strikes using UAVs, observation and reconnaissance, inspection and demining. In Russia, these technologies are currently not so common in the army.

At the same time, the ability of the Russian economy to translate the ideas of the military into the life of a number of experts seems doubtful. Production of the element base, which is a prerequisite for creating reliable, compact and functional electronics, is very poorly developed in Russia today. Also in Russia there is no industry that would be engaged in the manufacture of various kinds of robotic systems, currently a number of enterprises are engaged in these tasks, which work on their own initiative almost without interacting with each other.