3 May 2013
36
The dramatic start of World War II led to the fact that by October-November 1941 the Red Army lost almost all of its TanksAt the same time, the loss and evacuation of factories resulted in the fact that the industry was unable to compensate for the loss of armored vehicles by the production of new vehicles. At this critical time for the army and country, any weaponcapable of causing damage to the enemy. Trophies of the Civil War, the First World War and even the Russo-Japanese War were withdrawn from the warehouses and sent to the troops stored there on conservation. There were cases of using captured Japanese 105-mm guns, Arisaka rifles, German howitzers.

The design of the domestic self-propelled howitzer was started in the design bureau of plant No. 592 on its own initiative even before its evacuation, despite the fact that the design bureau engineers had no practical experience in designing and manufacturing armored vehicles. In September 1941, the plant was reoriented to repair tank and artillery weapons, including trophy weapons, the amount of which, starting from the winter 1941 – 42, began to grow quite actively (reaching 35% of the total number of evacuated property). 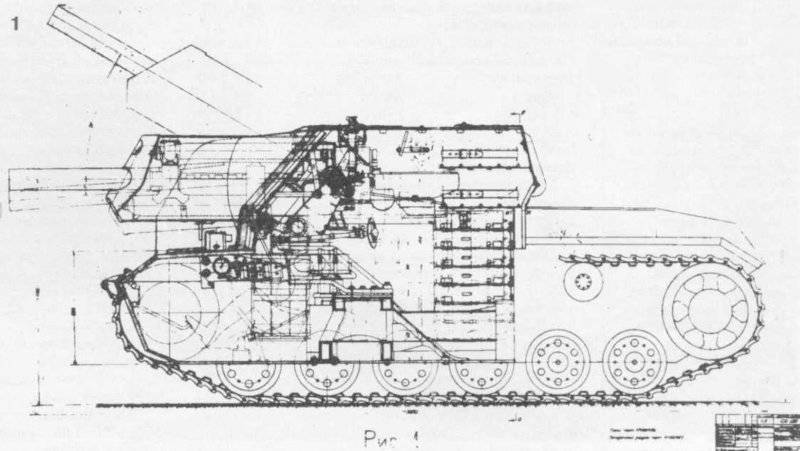 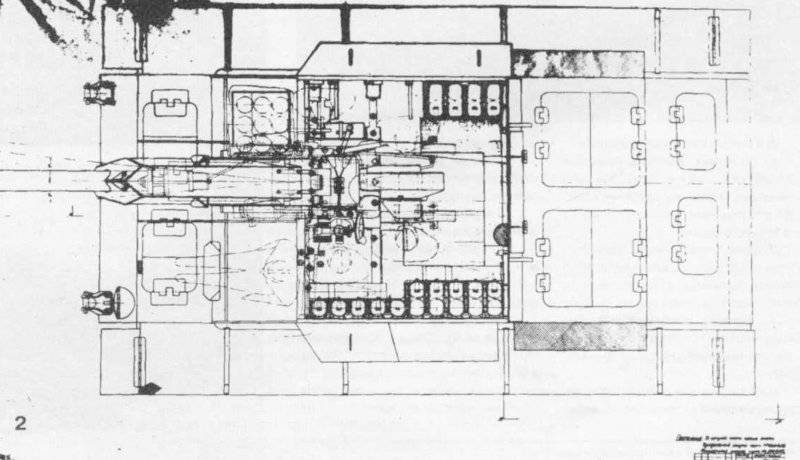 2. Section SG-122 in the plan (photocopy of factory drawings) 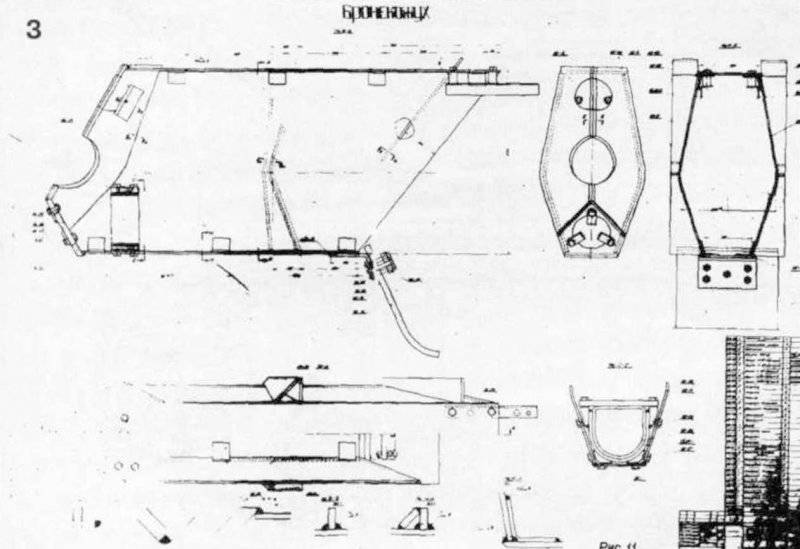 3. Drawing of the gun reservation (photocopy of factory drawings) 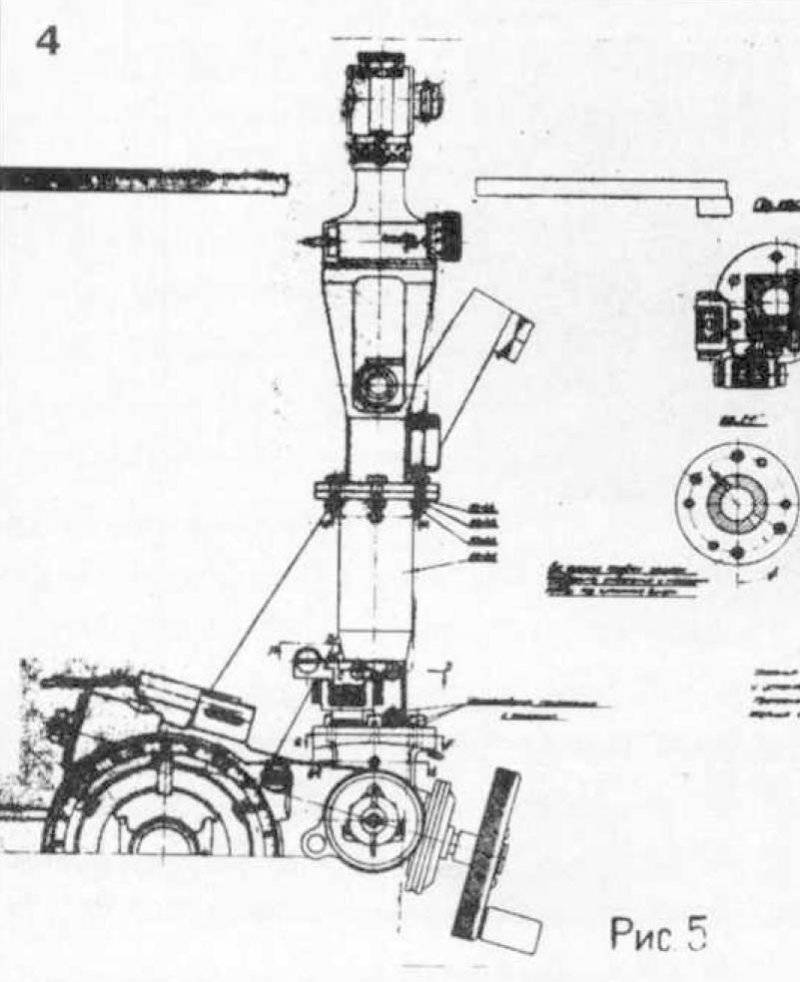 4. Drawing of the installation of the gun panorama in the conning tower SG-122 (photocopy of factory drawings)

Currently, it was not possible to find the exact start date of the design work on the 122-mm self-propelled howitzer, but the remaining copies of the drawings contain April 1942 g. This date is also confirmed by the following letter:

Chief of the repair department of the Abtu KS Brigadine Engineer Sosenkov.
Cc: Director of Plant No. 592 Pankratov.

In accordance with the decision taken by the Deputy Defense Committee of the USSR, Lieutenant-General of the T. Fedorenko Tank Forces on rearming trophy "artsturms" 122-mm howitzers revolving 1938, at factory 592, I ask you to give the necessary order for repair and delivery to factory 592 four trophy "Artturm". To speed up all the work, the first repaired "artturm" must be delivered to the factory before April 25.

13 April 1942 city
Chairman of the Technical Council, member of the board of the NKV E. Satel
(signature)".

The project, executed by the design team under the leadership of A. Kashtanov, was quite simple. As a base for the new machine used German assault gun StuG III with increased military conning. Such an increase in felling made it possible to install an X-NUMX-mm howitzer M-122 in the fighting compartment (the same as on the Russian SAU SU-30).

Why the 122-mm howitzer? Her choice was not accidental: at that time there was an acute shortage of 76-mm divisional and tank guns, and rather heavy 122-mm howitzers accumulated in the rear due to a lack of mechtyag means and front pieces for them. Thus, the creation of a self-propelled 122-mm howitzer was evaluated by the NKV technical department extremely high, and in May 1942, tests of the first prototype began, called the SG-122 self-propelled howitzer (Arthurm), or abbreviated SG-122 (A).

According to the description of the prototype, SG-122 (A) was created from the StuG III Ausf C or Ausf D. assault gun. The battle command post of the German SAU with the dismantled roof was cut to height. On the remaining belt, a simple prismatic box of 45-mm (forehead) and 35-25-mm (side and stern) armor plates was welded on. For the necessary strength of the horizontal joint, it was reinforced from the outside and from the inside with pads about 6 – 8 mm thick.

Inside the fighting compartment on the site of the StuK 37 cannon, a new M-30 howitzer was assembled. The main howitzer ammunition located on the sides of the ACS, and a few shells of "operational use" - at the bottom behind the howitzer machine.

The crew of SG-122 (A) consisted of five people: a driver (who occupied the place from the left-in front of the conning tower); SAU commander, he gunner horizontally (located behind the driver left side forward); Behind him, the first loader (he is also a radio operator) was also located sideways along the machine; opposite the commander of the ACS, the gunner was positioned vertically along the vehicle along the right shoulder (in addition to separate loading, the M-30 howitzer also had a separate tip); behind him the second loader also stood with his right shoulder forward.

For the entrance and exit of the crew in the car there were two hatches. One (main) was located in the aft cabin (and partly in the roof). The second one, the reserve one, was located in the sloping part of the frontal armor of the deckhouse in front of the gunner vertically. To communicate with their counterparts in the car left a full-time German radio station. There is no information about communication facilities inside SG-122 (A).

The howitzer was tested by mileage on a gravel highway and rough terrain (total mileage was 480 km), as well as shooting from open and closed positions (66 shots). The tests confirmed the high combat capabilities of SG-122 (A), however, a commission of representatives from the NKV technical department and the department of the chief designer of NKTP noted a large number of shortcomings, the main ones being:

1. Insufficient cross-SG-122 (A) on soft ground and a large load on the front track rollers.

2. Most of the load on the commander of the ACS, who was supposed to monitor the terrain, direct the gun, command the crew, etc.

4. The impossibility of firing personal weapons through side embrasures due to their unsuccessful location (ammunition prevented).

5. Insufficient strength of the joints of the side and stern sheets of the cabin.

6. Rapid gassed fighting compartment due to the lack of a fan.

The plant was ordered to manufacture a new version of the self-propelled howitzer, taking into account the elimination of the noted deficiencies. It was also recommended to develop a version of the conning tower for installing it on the PzKpfw III tank, the running gear of which was larger than the running gear of the assault guns, as well as providing better evacuation conditions due to the presence of side hatches.

After reviewing the deficiencies and refinement of the project, Plant No. 592 produced two improved versions of SG-122 (A), which differed in the type of chassis used (assault gun and PzKpfw III tank), which had the following differences from the prototype:

1. A single-piece cabin was made of thinner (35-mm - forehead and 25-mm - boards and feed) sheets. This made it possible to slightly reduce the weight of the car and somewhat increase its patency, especially since the second variant was tested with a “winter” track.

2. The staffing of the crew of SG-122 (A) has been changed. Now the commander of the ACS was the gunner on the vertical, who received his own hatch in the roof of the cabin (the hatch in the front plate was canceled to increase projectile resistance). For the review of the area, the commander received an artillery reconnaissance periscope (in the manner of a submarine), which could be advanced in a special glass. In addition, the commander's hatch SG-122 "improved" was equipped with a mount for a periscopic panorama.

3. Due to the fact that the sliding hatch of the panoramic sight was often sticking to the test from shaking, it was replaced with a double swing wing on a new car.

4. Airborne embrasures for firing from German-type personal weapons were canceled. Instead, they received airborne embrasures of the OGK NKTP, designed for the “76-mm assault assault cannon of support” of plant No. 37, which were also more successfully placed. Through them it was possible to fire not only from the "revolver", but even from the TT and the PCA, since the diameter of the opening of the embrasure was much larger than before.

5. The gun mount was lightened. To simplify the loading tool was added a folding tray. Above the breech of the gun on the roof placed an electric exhaust fan.

6. To increase the power reserve on box shelves SAU placed box-shaped fuel tanks from the tanks BT and T-34. They retooled spare parts and entrenching tools, making maximum use of domestic components in it.

7. The radio station was moved from the left side to the right and placed inside the wheelhouse, and the side box was eliminated to simplify production. For better durability of the boards, they were recommended to subsequently tilt to 10-20 °. 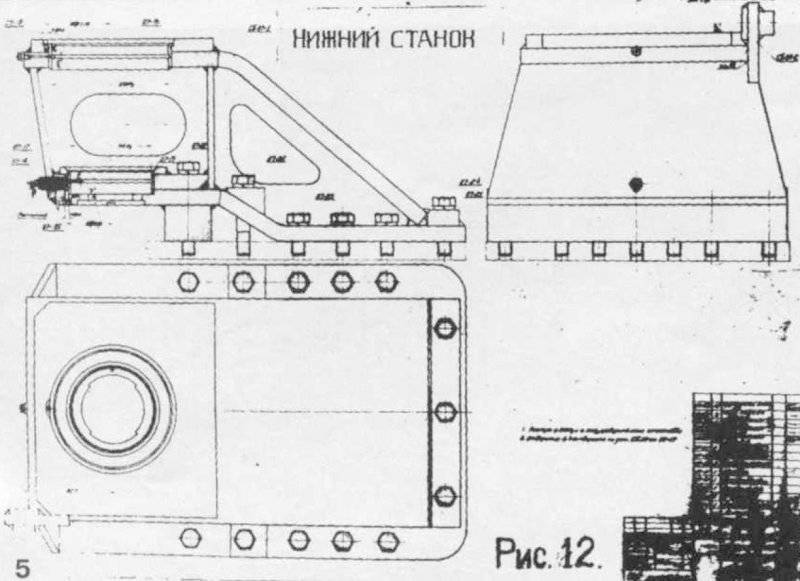 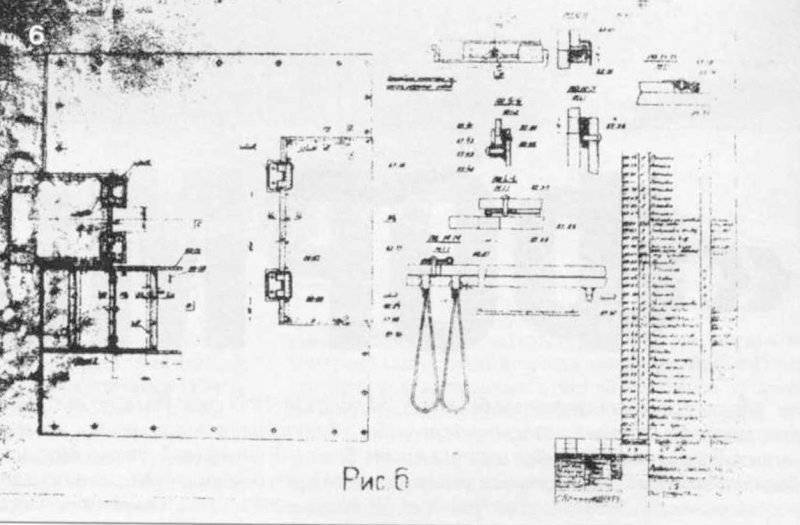 6. The roof of the conning tower SG-122 (photocopy of factory drawings) 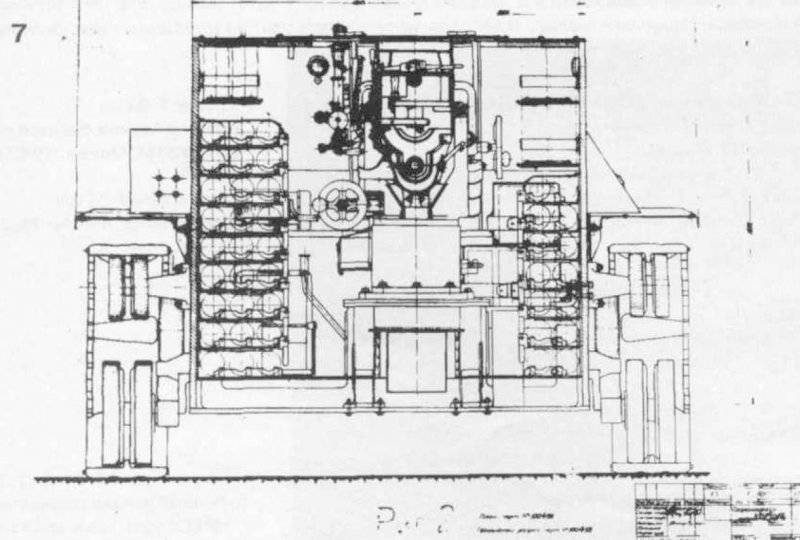 Specially commissioned by the plant number 592 for the new (improved) SG-122, Uralmash developed and molded an armored vehicle that was more adapted for serial production than the previous one, and also better protected from bullets and shrapnel. This made it possible to dispense with bulky side shields, which made it difficult to maintain the machine and overloaded the front track rollers.

In September, 1942, the plant received an order for 10 machines of "improved" design, which, most likely, was not executed due to the lack of the required number of serviceable chassis and armor. It is interesting to note that plant number 592 employees claim that the SG-122 shipment began as early as March 1942, and they note that German engines were not installed during the March frosts, and the mechanics had to pour burning gasoline into the carburetors to reanimate them. But I think it most likely refers to March of the next (1943) year, when SU-С-1, better known as SU-76, began to be shipped to the front.

Today there is no exact data on the number of SG-122 manufactured, but together with the StuG III, re-equipped 76-mm guns, before the end of 1942, the plant delivered 8 units and 2 experimental machines were manufactured on the chassis of the captured tanks PzKpfw III and PzKpfw Iv. By 15 November 1942 of the year at the artillery range near Sverdlovsk there were three SG-122, two of them on the chassis of assault guns. One of the two “improved” SG-122 on the chassis of the PzKpfw III 5 tank December was delivered to the Gorokhovetsky testing ground for comparative State tests with the U-35 (future SU-122) Uralmashzavod design.

According to their results, the order for 122-mm self-propelled howitzers for 1943 year, factory number 592 was canceled, and 11 February 1943, all manufactured SAU (including experienced), stored in the factory, by order of the NKV were placed at the disposal of the chief of armored control for the formation of training tank self-propelled units. 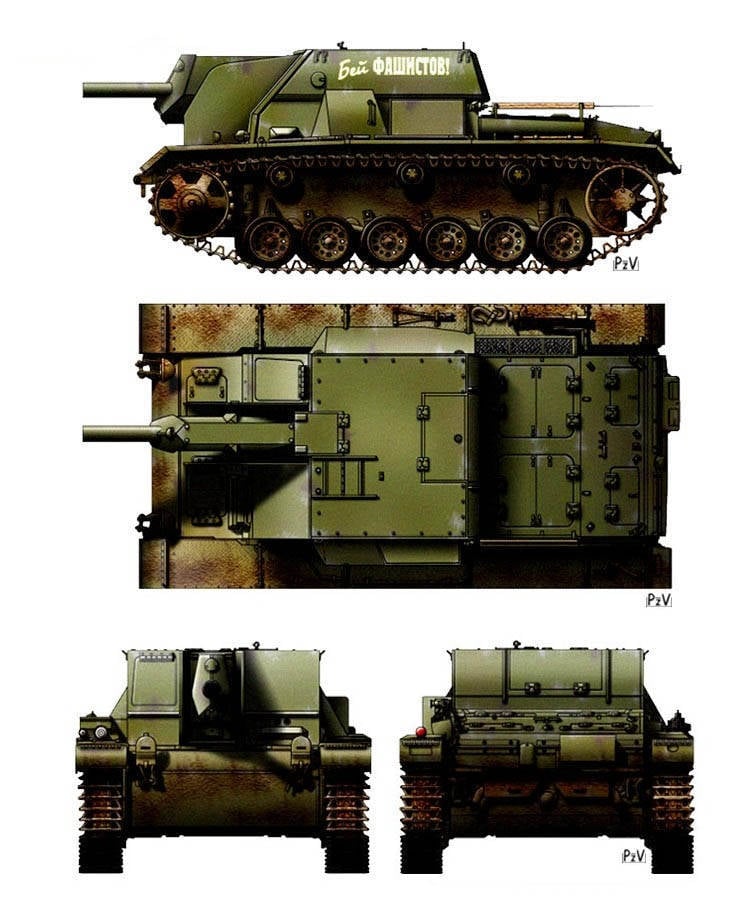