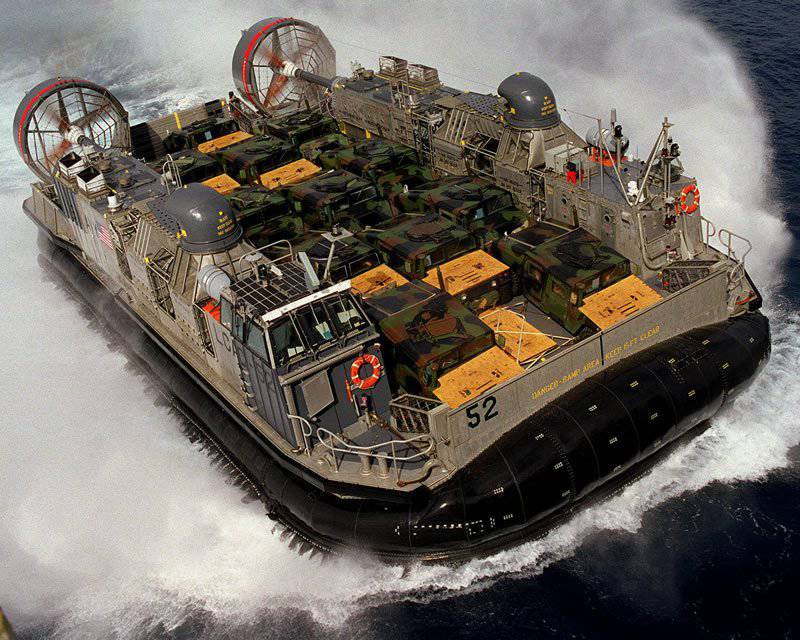 The hovercraft (Landing Craft Air Cushion, LCAC) is a high-speed landing craft with large landing ships docks. It can carry around 68 tons of payload (up to 75 tons in overloaded condition). The boat is used to transport weapons systems, equipment, cargo and personnel from the ship to the shore or along the coastline. The main advantage of the air-cushion landing craft is that LCACs are able to move through swamps and other coastal obstacles, carrying heavy loads such as the Abrams tank M-1 at high speed and can be equipped for transporting personnel to Quantity to 180 people. The LCAC is capable of performing the task regardless of the depth of the water, underwater obstacles, shoals or adverse tides. 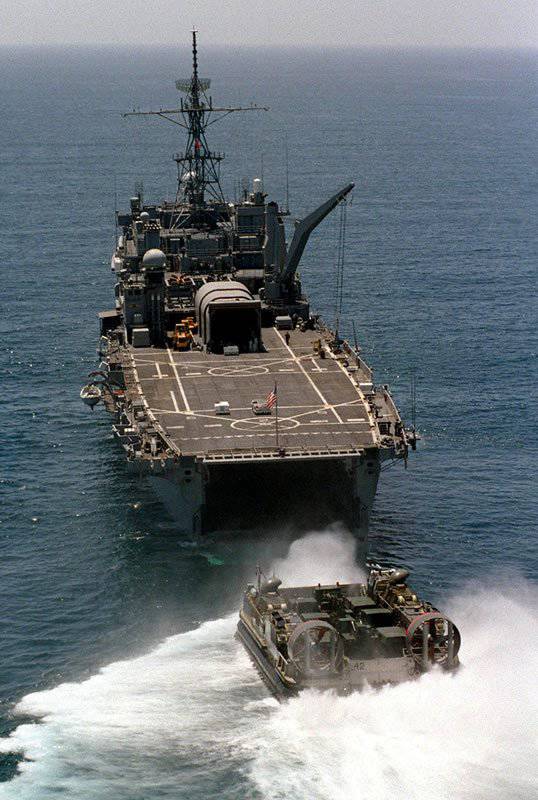 It is able to move on an air cushion, despite obstacles up to one and a half meters in height, and regardless of terrain or topography, including muddy, sand dunes, ditches, swamps, river banks, sleet or slippery and icy coastlines. Equipment such as trucks and tracked vehicles can be unloaded under its own power through the bow and stern ramps, thereby shortening the critical unloading time. Thus, LCAC is able to land troops on 70 percent of the coastline in the world, compared with only 17 percent for conventional amphibious assault ships. 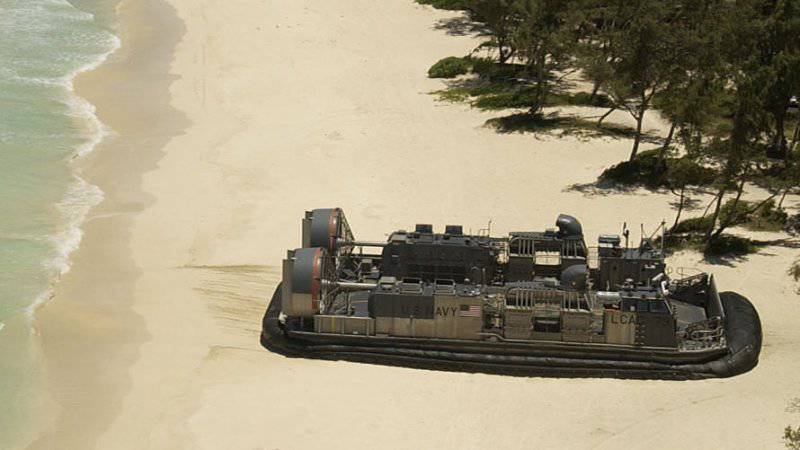 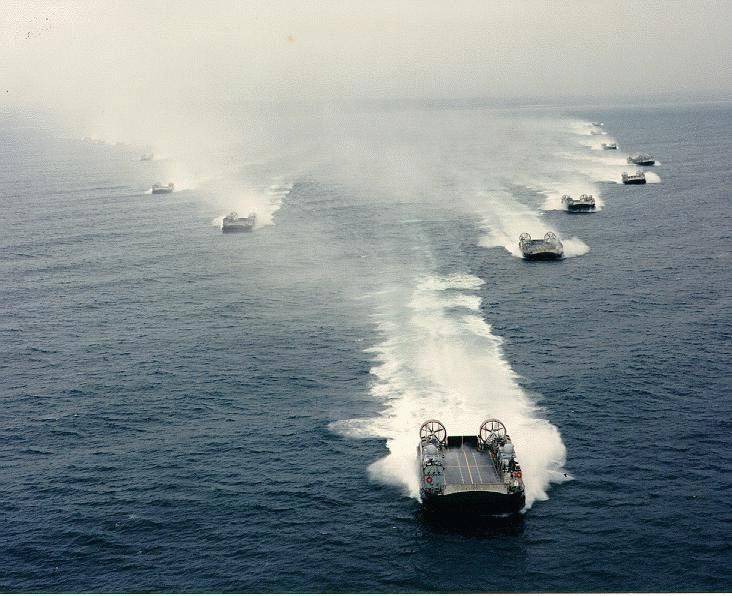 LCAC tests were conducted in Panama City, Florida. Subsequently, LCAC was tested in California, Australia and in Arctic waters. Tests in Alaska in March 1992 included an assessment of the operational effectiveness of LCAC in arctic conditions. During the tests, it turned out that LCACs were not very effective for conducting operations in the Arctic, and even the use of a special kit for cold weather could not change the situation. Tests have also shown that at low temperatures engine power increases to the limit of the gearbox capabilities, but icing and sea conditions neutralize this advantage. Since then, LCAC has been used in two exercises in the Arctic, one of which included operations at temperatures of minus 10 ° C and difficult weather conditions. Based on these exercises, it was decided that there was no need for further trial operation. LCACs have demonstrated the ability to move on thin ice and open water in a fairly calm sea. The distance traveled per exit varied from 4-x to 16-km in one direction. Icing, which occurs under certain conditions, required a periodic interruption of the mission to remove the ice. When tested in the Arctic, JP-5 fuel was used to alleviate problems with clogged filters. In addition, the LCAC participated in a series of trawling exercises, where it proved to be a potentially effective minesweeper in shallow water. 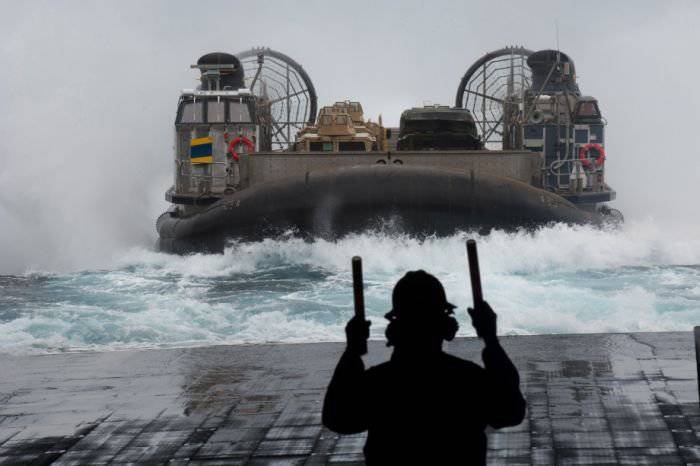 For the first time, LCAC was deployed in 1987, when amphibious boats with board numbers 02, 03 and 04 were taken aboard USS Germantown (LSD-42). In July, 1987 of the year LCAC 04 overcame Buckner Bay in Okinawa and sounded the first landing of the LCAC in a foreign country. The largest LCAC deployment took place in January 1991, when four squads of eleven boats entered the service in the Persian Gulf to support the operation “Desert Storm”. 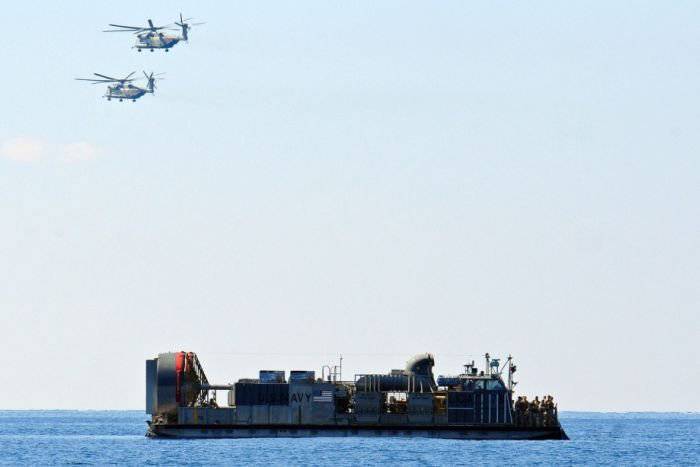 Users of air-cushion assault boats note some similarities between the LCAC and the aircraft. The “pilot” of the boat is located in the “cockpit”, wearing a radio headset. He receives instructions from the air traffic control point located next to the stern gates of the ship-dock. During the flight, the crew feels the same feelings as on an airplane with high turbulence. The pilot controls the Y-shaped steering wheel, his legs are on the control pedals, and he "flies like a puck in the air hockey." LCAC is also similar to a helicopter, it has six dimensions of movement. 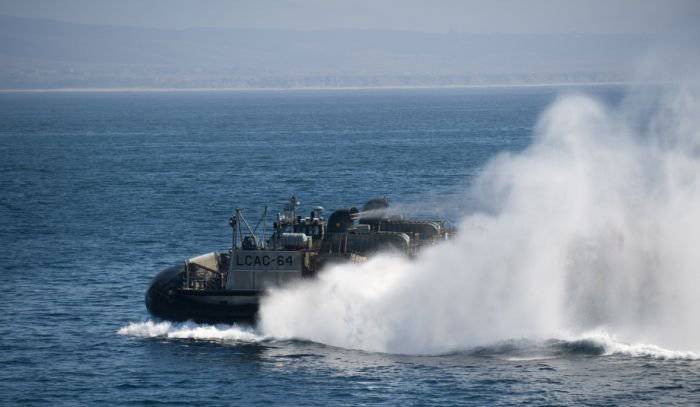 With such an expensive and inherently dangerous machine as LCAC, sound thinking and making the right decisions play a key role. Concerns about the cost of training, forecasts for an increase in the number of LCACs and their crews, as well as high staff turnover in the training units have led the fleet to realize the importance of developing more accurate methods for selecting candidates. Thus, the turnover of operators and engineers has decreased from the initial level in 40% in the 1988 year to the 10-15% at present. 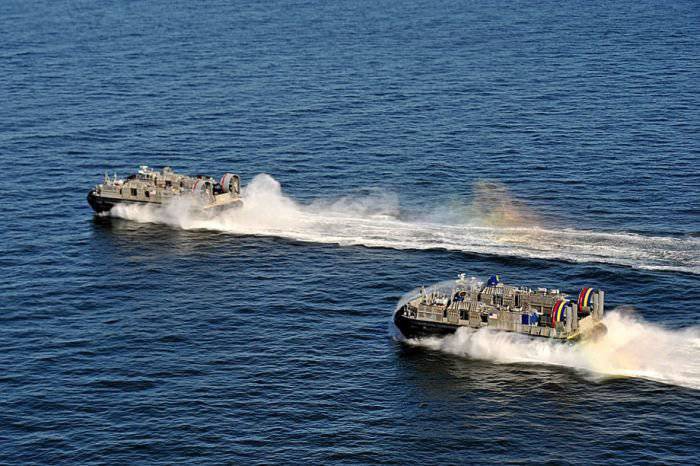 The LCAC had successful combat experience in Somalia, Bangladesh, Liberia, Haiti and Kuwait. He also provided invaluable assistance during disaster management, including tsunamis and hurricanes. 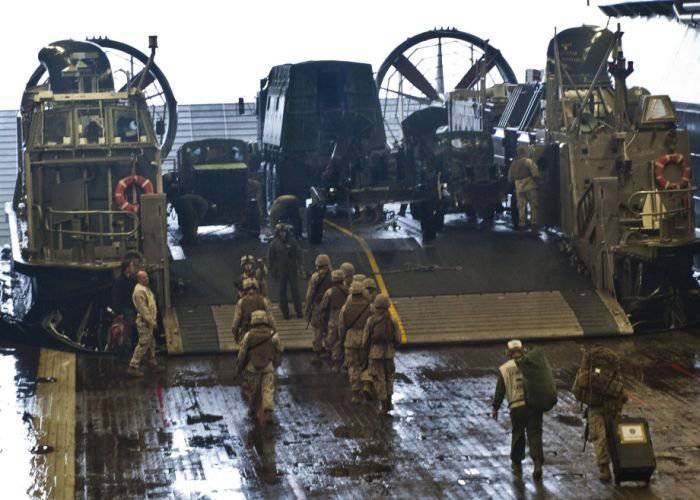 Thirteen years ago, the US Navy decided to upgrade its air-cushion landing craft and extend their life from 20 to 30 years. The real work began in the 2005 year, and today the 30 airborne amphibious assault ships have been modernized, or they are in full swing (seven LCACs are now undergoing this process). The amount of modernization is about $ 9 million each. Another 72 boats are in operation, ten are in reserve (as a replacement), and two are used for research and development. The whole process will take more than ten years. 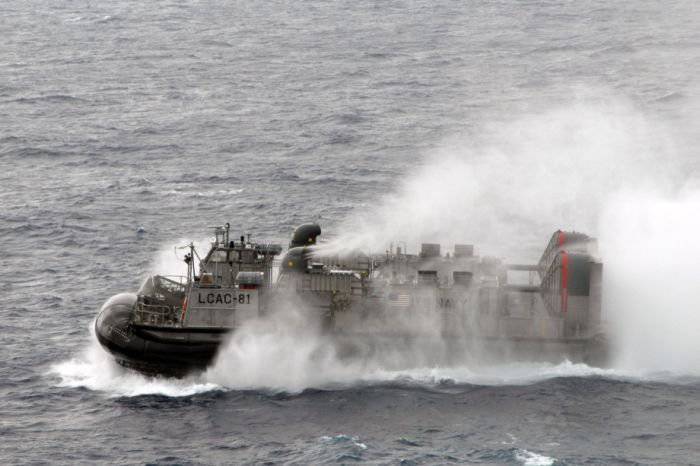 In the course of modernization, the engine is replaced (in those cases where it is possible to avoid replacement, it undergoes a major overhaul), structural elements damaged by corrosion are replaced, and new electronics and other accessories are installed. 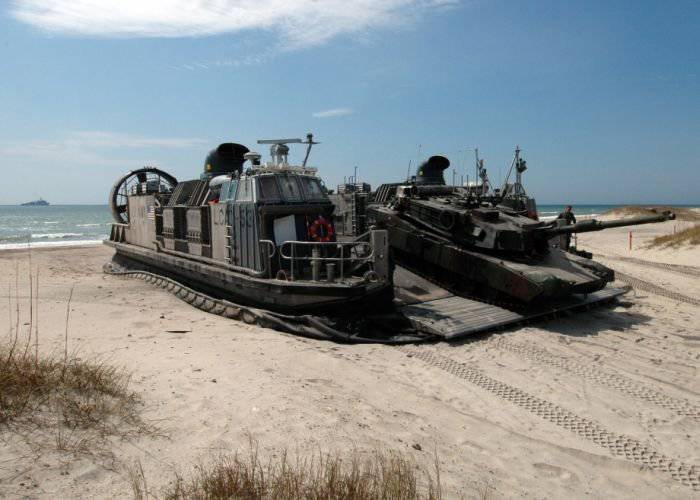 The C4N system (command, control, communications, computers and navigation) has undergone the modernization process, the LN-66 radars have been replaced with more modern and more powerful P-80 radars. A new open-architecture electronics based on modern commercial equipment provides the fastest integration of accurate navigation systems, new communication systems, etc. The new LED screens and LED keyboards consume less energy than the old cathode ray tubes and light-type indicators, and also generate less heat. In combination with the new air conditioner installed in the command post, this provides the crew of the hovercraft with improved working conditions. In addition, the engines were upgraded to the configuration of ETF-40B, providing extra power and lift (this is especially important at temperatures above 40 degrees Celsius), reduced fuel consumption, reduced service intervals. 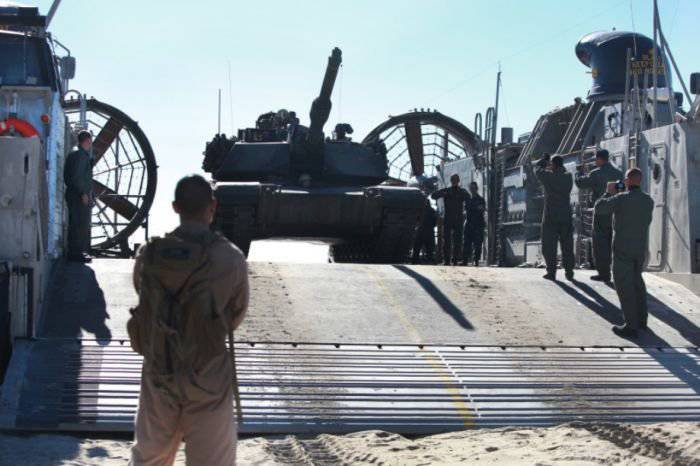 Corrosion elements were replaced with newer, more durable, non-freezing materials. The new skirt of an air cushion reduces drag, increases driving performance over water and land, and also facilitates maintenance requirements. After the above procedures and painting, the upgraded boats look like new, but with significant improvements. Upgraded LCACs are easier to maintain, more reliable, and have better performance. 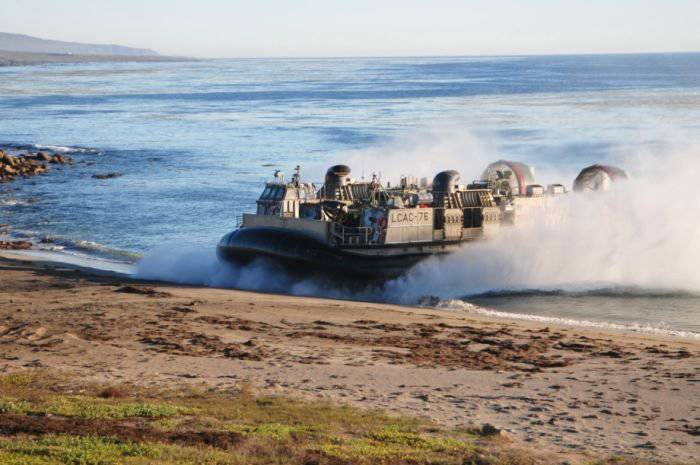 On July 6, 2012, a contract was signed with Textron Inc to develop a replacement approaching the end of its LCAC service life. The new landing craft SSC (Ship-to-Shore Connector) will be an evolutionary replacement for the existing fleet of hovercraft. SSC will enhance the tactical capabilities of over-the-horizon landing aids. They will have increased reliability and maintainability, will reduce the total cost of operation, and will also meet the growing requirements for the payload of the Maritime Expeditionary Battalion-2015 program. The program involves the construction of a total of 73 boats (one for testing and training and 72 for adoption). Deliveries are scheduled for the 2017 fiscal year with the adoption of the 2020 fiscal year. 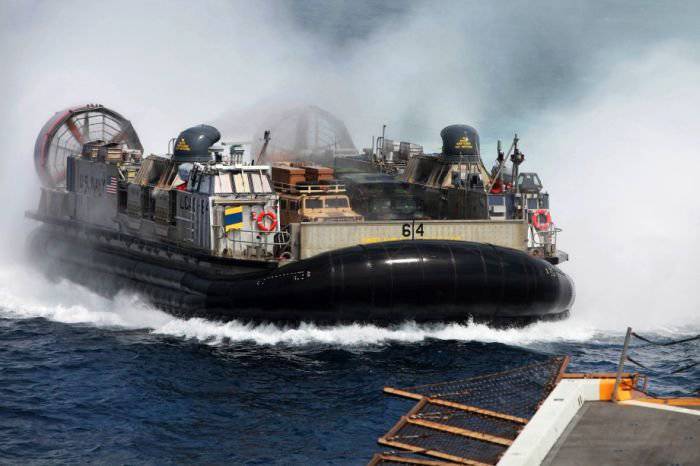 Ctrl Enter
Noticed a mistake Highlight text and press. Ctrl + Enter
We are
Development of landing craft from ship to shoreCoastal Warships: Modern Approach
23 comments
Information
Dear reader, to leave comments on the publication, you must to register.