Ukrainian mercenaries in modern wars: who needs it? 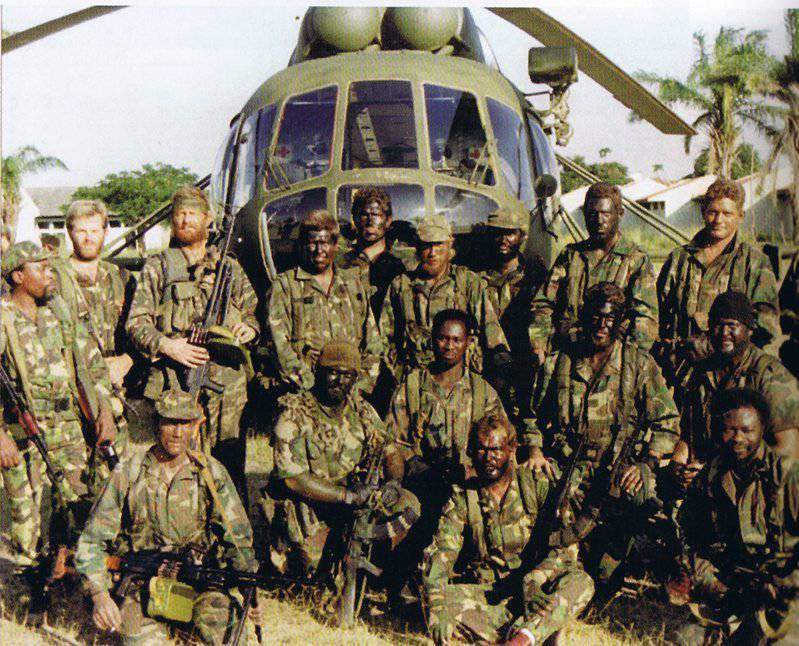 In the memory of the Ukrainian people are still fresh memories of the events, the direct participants of which were Ukrainian citizens. We are talking about the trial, which took place recently in Libya over the Ukrainians, who allegedly provided military services to the Gaddafi regime. Currently, it is not worth discussing the validity of such accusations, because the problem is that recently more and more countries in the world perceive Ukraine as an exporting country of military specialists who are able to perform any tasks assigned to them, and not for a lot of money. . That is why more and more often many people pay attention to Ukrainians only in this aspect. At the same time, many analysts are convinced that at the given time this problem is not relevant for the state. But is it really?

As you know, everything in the world tends to change. However, there remain things that are not subject to change, in particular, it is about the desire of the states for constant development, gaining independence, changing the political regime, obtaining new natural resources to strengthen their own positions on the world stage. Unfortunately, some states still use local wars and armed conflicts as a source of enrichment. It should be noted that the methods and forms of conducting military operations are changing, but they cannot do without manpower. That is why one of the most problematic aspects of warfare is issues related to the use of mercenaries. From the experience of recent years, we can say that mercenaryism has become one of the main components of the armed conflicts of our time. You don’t have to go far for evidence, just look at any issue of the world News - Almost every story about any of the local wars refers to mercenaries.

According to the same media, more than two and a half hundred mercenaries were captured during the fighting in Tripoli, and among them 19 people turned out to be Ukrainians. It is noteworthy that the Ukrainian Foreign Ministry denies such information, stating that it does not possess any information of this kind, and therefore conducts an inspection. And in statements of this kind there is nothing surprising, because in Ukraine mercenary is a criminal offense. In addition, often in the press you can see such messages, which are positioned as sensational, but in fact do not contain any valuable information.

As for the participation of Ukrainian mercenaries in the Libyan war, information about their participation appeared almost from the very beginning of the war. So, even 22 in February 2011 of the year in American sources appeared information that Ukrainian pilots piloted the Libyan MiGs, firing at the protesters, but no evidence was given to such statements. As events developed, the Ukrainian mercenaries were increasingly mentioned. So, in particular, 23 August in one of the social networks of the American journalist wrote that in one of the battles, the Libyan rebels managed to capture at least 10-11 mercenaries from Ukraine, who fought on the side of Gaddafi.

However, the participation of the Ukrainian mercenaries in the Libyan war was not limited. For example, in February 2012, the head of the political bureau of the National Movement for the Liberation of Azavad Mahmoud Ag Ali said that the Malian state used Ukrainian mercenaries to service and pilot military aircraft, which not only destroyed transport and settlements of civilians, but also people in the Agabo areas , Intedeni, Uzen and Tesalit. Soon this statement was sent to the Ukrainian Ministry of Foreign Affairs.

It is worth noting the statement by the representative of the Investigative Committee of Russia V.Markin regarding the participation of Ukrainian citizens in South Ossetia in the armed conflict. And such statements are quite common, almost every year, as soon as somewhere in the world another armed conflict erupts.

But the problem lies not only in the participation of mercenaries from Ukraine. Traditionally, mercenaries are not tied to any region in the world, because they come from many states and appear in the place where the so-called employer sent them. At the same time, if earlier mercenary was connected mainly with Africa, in recent years “soldiers of fortune” have begun to meet more and more in Central America, in Asia, in the Balkans and the Caucasus, in the Pacific region. Thus, for a fee, these people take part in armed conflicts to which they have nothing to do.

It should be noted that the role of mercenarism especially increased in the 60-s of the twentieth century, after the process of decolonization. Mercenaries were attracted to the struggle for the right of self-determination of peoples who were previously colonies. In addition, they were used to combat national liberation movements and to destabilize the newly established independent governments.

With the end of the Cold War, a new category of mercenaries appeared, and their activities changed to a certain extent. At that time, the main source of conflict was the resurgence of religious and ethnic intolerance, extreme nationalism, along with the fact that ideological differences gradually weakened. Therefore, powerful states have practically ceased to take care of establishing control in the regions located in close proximity to their borders, and less attention is paid to conducting operations abroad. This was the starting point for increasing the demand for mercenary services. At the same time, the first companies appeared that were engaged in providing security and providing military assistance, selling a variety of services, in particular, hiring military specialists to participate in military combat operations.

The problem of mercenary, by the way, is of great concern to the world community. Even the resolution on the Commission on Human Rights regarding mercenarism states that the activities of mercenaries are the reason for the difficulty of the process of self-determination of peoples and contrary to international law.

Over the past two decades, the United Nations has adopted more than one hundred documents that condemn the activities of both the mercenaries themselves and those who use them. As early as 1989, the International Convention on the Suppression of the Recruitment, Financing, Training and Use of Mercenaries was adopted by the General Assembly. Similar documents were adopted by the Organization of African Unity, in particular, in 1977, the Convention on the Elimination of Mercenarism in Africa was adopted.

As for the Ukrainian legislation, there is a law in it, according to which the citizens of the country are prohibited from taking part in armed conflicts and wars for the purpose of obtaining any material gain. Violation of this law is punishable by deprivation of liberty for a term of three to ten years. But not everyone takes it seriously, trying in various ways to be abroad as mercenaries. In this regard, recently the activity of private foreign military companies has attracted more and more attention. Every year the number of Ukrainian citizens who work in these companies increases.

According to the Geneva Center for the Democratic Control of Armed Forces, it is common practice to refer to private military companies as commercial enterprises offering specific services related to participation in armed conflicts and wars, including conducting military operations, strategic planning, intelligence gathering, providing operational support and logistics, as well as maintenance of military equipment.

At the same time, the majority of such companies seek to position themselves as security companies, but since security functions are carried out, as a rule, in a combat zone, it is not possible to distinguish combat functions from security ones. That is why private military companies are often associated with mercenarism.

In this situation, the position of the Ukrainian state regarding the activities of private military companies is of great concern. It is a pity, but at present there is no clear position on this issue. At the same time there are two completely opposite opinions. Some experts and analysts talk about the need to legalize the activities of such companies through the approval of such activities in national and international law. The other part says that this kind of activity is nothing more than mercenary.

Whatever it was, and one thing remains indisputable: employees of private military companies periodically take part in armed conflicts abroad. And from time to time the activities of these companies become the object of increased interest from the media. In particular, we are talking about companies such as Blackwaters, ArmorGroup, Northbridge Services Group and many others.

Thus, in particular, in April 2003, the Baroness Zion, a member of the English Parliament, sharply condemned the activities of the Northbridge Services Group in Cod d'Iduvare. As a result of this statement, the British Government expressed concern about the recruitment of British, South African, French and Ukrainian mercenaries from among former military personnel.

Indicative is the activity of the company “Blackwaters”, the characteristic features of which is a hard work style with weaponsIn some cases, unjustifiably. So, for example, in 2007, an incident occurred in Baghdad, as a result of which civilians were injured. Local authorities blamed the employees of this military company and demanded the cessation of their activities in the country. In addition, the authorities demanded that all military companies be checked for compliance with Iraqi laws. Over time, the activities of the "Blackwaters" in the country resumed, but the mercenaries were used only to perform tasks of particular importance.

At the beginning of 2011, employees of G4S (“Group 4 Securicor”), during the protection of petroleum products in the Niger Delta, engaged in an armed conflict with members of the terrorist organization “The Movement for the Liberation of the Niger Delta”. As a result, representatives of the Nigerian government stated that the employees of this company had no right to enter into armed conflicts with local residents. By their actions, the mercenaries violated the law - the Organization of African Unity Convention on the Elimination of Mercenarism in Africa.

Thus, at present, the activities of private military companies can be considered as a legal way to find a job in “hot spots”. However, in reality there is no legal component here. Many who decide to work as a mercenary, as a rule, sign an agreement on formal employment, which spells out social guarantees in unforeseen cases, after receiving injuries and so on. But in reality, these agreements do not have any legal force on the territory of Ukraine, because such companies operate outside the national legal framework.

As for the Ukrainian private military companies, which began to appear at the beginning of 2000-ies - this is, in particular, the “Muse Professional Group” and “Vega Strategic Services” - and that is not all that simple. These companies not only conduct their activities in zones of armed conflict, organizing conditions for the participation of their personnel in combat operations and creating a threat to their lives. They threaten with their activity the national interest of the state. Ukraine as a democratic country assumed certain obligations, in particular, respect for the sovereignty of other states. Therefore, the unresolved issue of mercenarism in the country can be used by other states to discredit Ukraine in the international arena.

Ctrl Enter
Noticed oshЫbku Highlight text and press. Ctrl + Enter
We are
Memo to mercenaries in AfricaGood luck soldiers, “wild swans”, “dogs of war” ... Mercenaries - who are they?
152 comments
Information
Dear reader, to leave comments on the publication, you must to register.