April 26 2013
50
Even during the so-called "Winter Warrior" 1939-40. among other trophies of the Finnish army, a certain number of Soviet fleet tanks - BT. However, despite the fact that their brothers, the T-26, came in what was called “to the court,” this tank was clearly unlucky in his career in the Finnish army. Tanks did not take root in any way. Not much has changed with the arrival of new trophies captured already in the summer of 1941. BT tanks were again set aside, since, according to the Finnish leadership, they did not meet the requirements of modern warfare. But soon their time came. In the spring of 1942, the Finnish VTT began design work to improve the captured BT-7. After some discussion, it was decided to convert the tank into an assault support weapon, or, in domestic terms of the pre-war era, into an artillery tank! To do this, it was proposed to install a 4,5-inch British Mk 11 howitzer (Finnish designation 11-1 H 18) in the tank’s fighting compartment. These 24 howitzers were delivered during the Finnish campaign of 1939-40. British government, and after its completion about 30 more of these guns were purchased from the government of Spain. 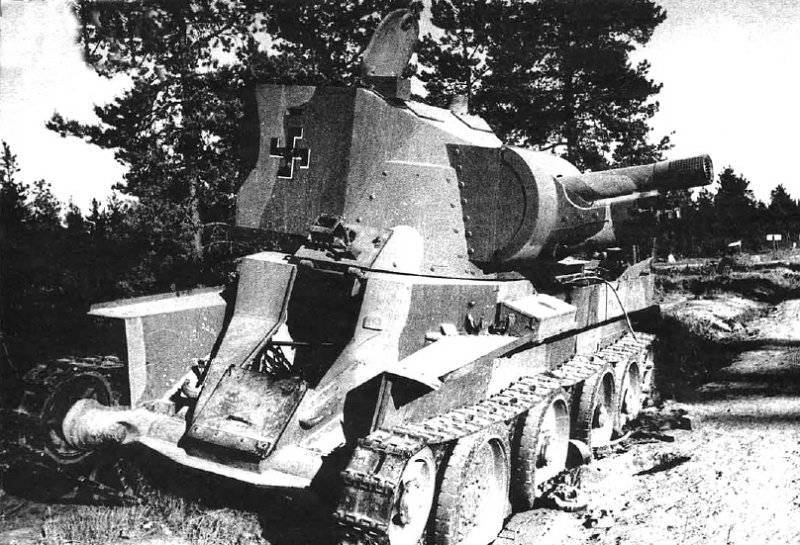 The howitzer had a fairly large size of the breech and could not be placed in the existing tower. But the military refused to install it motionless in the hull. Thus, the decision is ripe - to make a new enlarged turret for the tank, and add a new muzzle brake to reduce the length of the rollback to reduce the howitzer length. The first manufactured version of the BT-42 entered testing in September 1942 g. He received an enlarged tower made of the old, but with an increased up and back combat compartment (it received a new feed niche, welded from flat armor plates).

Since the howitzer had a separate loading, it was possible to fire from it only from a place. There was no radio station. Tests were conducted in a tank brigade and ended unsuccessfully. The tank was sent to VTT for revision at the end of September, but soon it was taken as the R-702 number for the Standard in the construction of the series. The corpses of captured BT-7, intended for alteration in the BT-42, were thoroughly repaired in the tank center and Lokomo Ltd. There was a complete reassembly, repair and adjustment of engines, transmissions and seal holes in the armored hull. Then, after conducting short trials on the go, the chassis arrived for armament. Alterations of the towers and artillery systems (mainly the installation of a perforated muzzle brake and an increase in pressure in the recoil brake) were carried out at VTT in Yvaskila, after which the final assembly of the BT-42 was carried out in the tank center in Varkaus. The first serial tank, the BT-42, entered the disposal of the assault tank battalion 26 in February of the 1943. In total, the 18 vehicles were supplied to the Finnish army. Despite the fact that the manufacturing process of the BT-42 assault tanks took less than a year, it took a lot of unproductive time and effort to implement it, but the opinion of the Finnish military, mainly because the repairs of the captured B'G-7, did not allow the use of factory housing for other works. 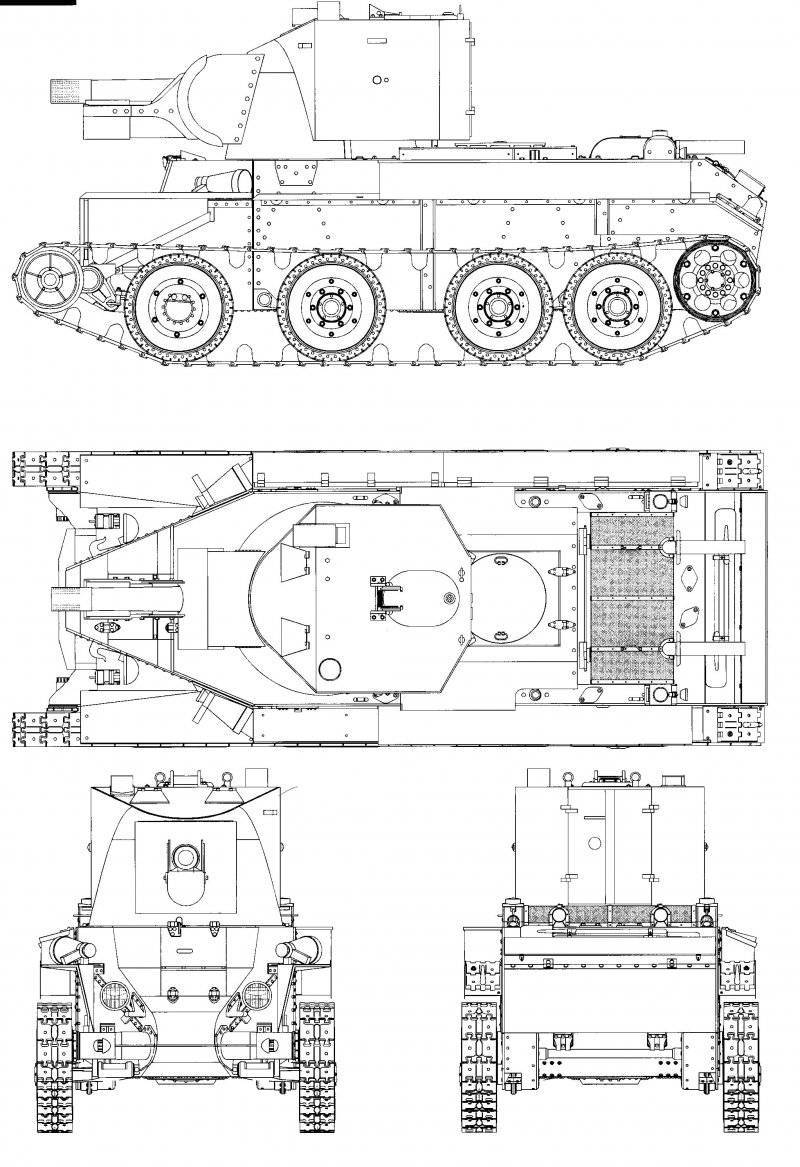 In addition, military use showed that the tanks were unsuccessful in battle. Not to mention the unreliability of the undercarriage and the engine, separate loading, which fell on the shoulders of ONE person, coupled with the unfortunate placement of the ammunition and the tightness of the crew compartment, did not allow any significant number of shots to be fired. The work of the gunner on the guidance mechanisms quickly tired him. In addition, the range of a direct howitzer shot was insignificant, and the penetrating ability of the armor-piercing shot made one want something better. Thus, in the fall of 1943, the BT-42 artillery tanks of the assault battalion began to be replaced with StuG-40 coming from Germany. 7 December 1943. All the BT-42 were consolidated into a new separate tank company, where they quietly grew old. Nothing special in the battles of 1943-44. This company did not show itself.

Before 1950, in the Finnish army there were 10 tanks of this type, which were transferred after the war to the composition of training machines. Then for another six years in the army there was one BT-42, now living its time in the tank museum in Parola. One vehicle of this type, captured by the Soviet army in the summer of 1944, was delivered to the territory of the Leningrad Artillery range, where, by order of Fedorenko, she was put to the test on the move, and "came to an unsuitable condition." Its further fate is unknown. 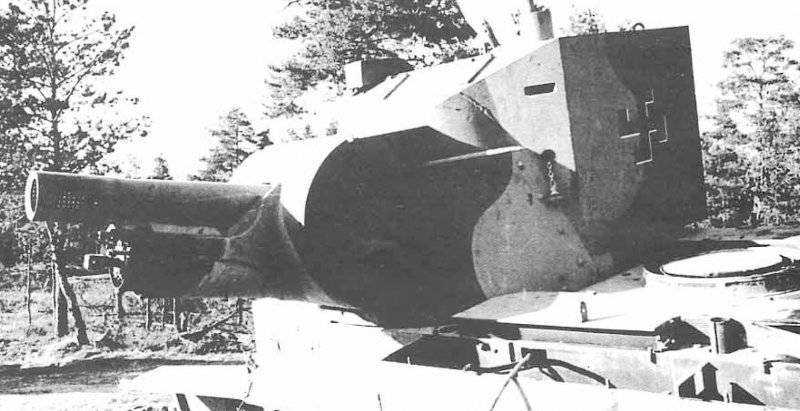 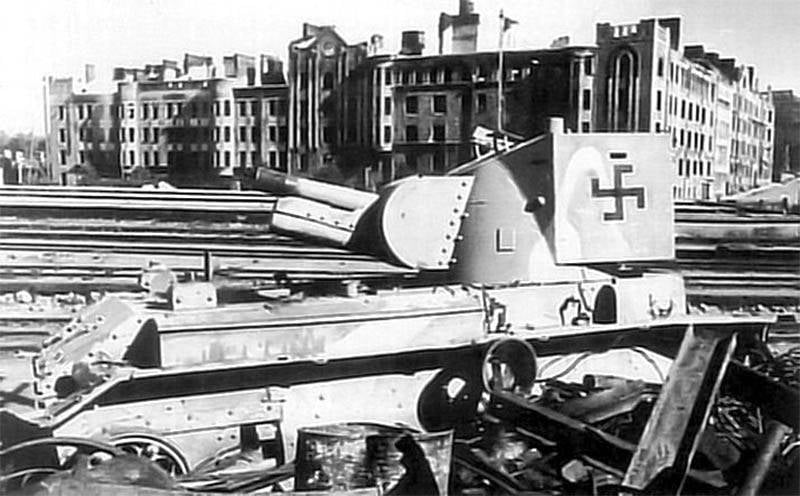 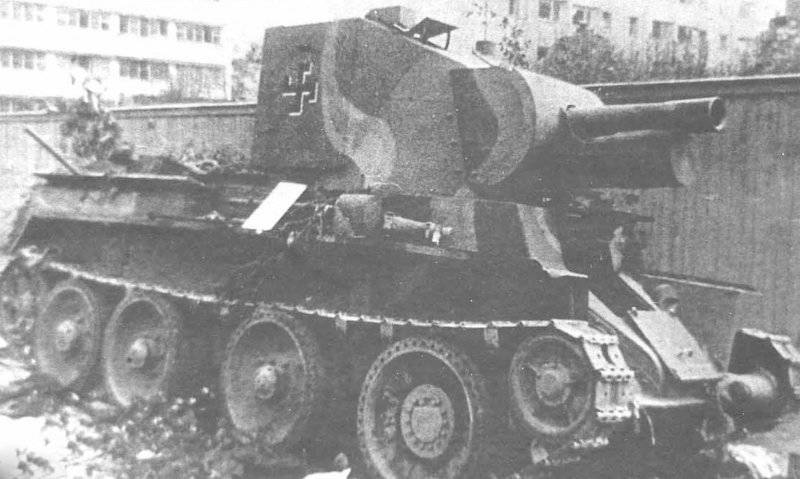 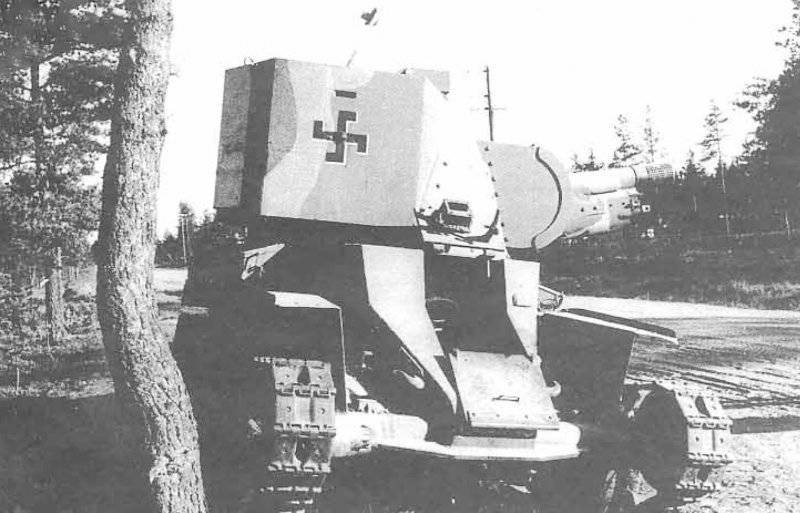 And this BT-42 was left in Vyborg completely serviceable. Perhaps it was this machine that was tested in the USSR. Summer 1944

Ctrl Enter
Noticed a mistake Highlight text and press. Ctrl + Enter
We are
Self-propelled anti-tank gun Sd.Kfz.164 "Nashorn"Armored vehicles of Germany in the Second World War. Assault gun "Ferdinand"
50 comments
Information
Dear reader, to leave comments on the publication, you must to register.