Su-30MKM and its competitors in the Malaysian tender


The exact timing of the tender is still unknown, but most likely it can be held in May, after the presidential election in the country. The cost of a possible deal to acquire 18 fighters is estimated at over a billion dollars. It is assumed that the new aircraft will replace the Russian fighter MiG-29 in the Malaysian Air Force. Currently, according to experts at the Air Force Malaysia is 59 fighters: up to 10 hopelessly obsolete American F / RF-5E Tiger, 13 British Hawk 208 (combat training), 10 MiG-29N, 8 F / A-18D Hornet and 18 Su-30MKM. Malaysia acquired Sukhoi aircraft in 2003 year. The amount of the transaction amounted to 910 million. The Russian company won the tender, the competitor of the Russians was the American fighter F-16 Fighting Falcon.

In October 2012, Commander-in-Chief of the Air Force of the country, Tan Sri Rodzali Bin Dowad, spoke with journalists and noted that the Air Force had no preference - to acquire a single- or twin-engine fighter, as long as its functionality meets operational requirements, and framework that we can afford. According to him, the Air Force created a special comparative table that will allow assessing the degree of compliance of fighters with the requirements of the competition. The Malaysian military focuses on aircraft life cycle cost and maintenance efficiency, while the compatibility of weapons with the existing fleet also plays a role. 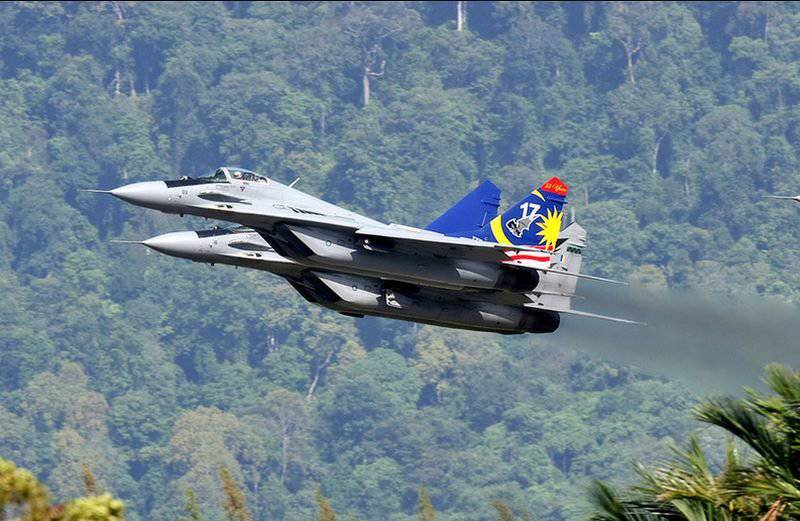 At one time, the Malaysian contract was considered the most successful for RAC "MiG" and the Russian defense industry as a whole. According to the agreement from 7 June 1994, Malaysia was to receive 18 MiG-29 fighters, including 2 training and combat vehicles. The transaction amount was estimated at 560 million dollars. This amount also included the supply of 2-x fighters for ground training of technical personnel, the necessary weapons and training services for local pilots and technicians. The subject of the transaction was the upgraded MiG-29SD fighter aircraft, which had an expanded nomenclature of weapons, the best radar aiming complex, an increased mass of payload.

In addition, the customer put forward a number of additional conditions. In particular, the aircraft needed to be adapted to the humid Asia-Pacific climate, the engine life could be increased to 2000 hours, and the aircraft could be equipped with satellite communication and navigation systems. The fighter range was increased by using airborne refueling systems.

The first MiG-29 arrived in Malaysia as early as April 1995, and the last aircraft was delivered 5 June 1995. The fighters were transported to the country with the help of An-124 “Ruslan” cargo aircraft. Malaysian MiGs received the designation MiG-29N and MiG-29NUB. Of these, 2 squadrons were formed - 17-I and 19-I. The equipment of the AN / ARN-139 TACAN radio navigation system was introduced into the onboard equipment of the fighters, the GPS satellite navigation system receiver was mounted, technical inscriptions were in English, the instrument scales were scaled in the English number system, the Rita warning system also works in English language. Aircraft could use missiles RVV-AE and received a radar-aiming complex "Topaz".

There are a number of positions that can ensure Boeing’s victory in the tender. Among them is the Boeing offset software package, which provides for technical cooperation between countries, as has already been the case with the 8 F / A-18D Hornet fighter jets ordered in 1993 year. The issue of technology transfer, which often in international tenders was a very big problem for American fighters, particularly in India and Brazil, is not such a serious problem. In Malaysia, offset requirements are more focused on industrial development in all areas, rather than on the assembly and deployment of local aircraft production.

The Super Hornet platform has a lot of arguments in its favor. Firstly, this is one of the cheapest bidders to win the tender, and secondly, the prospect of connecting to the service infrastructure and supplies of the US Navy is very tempting for potential buyers in terms of the cost of supporting fighters in operation and upgrading them in the future. 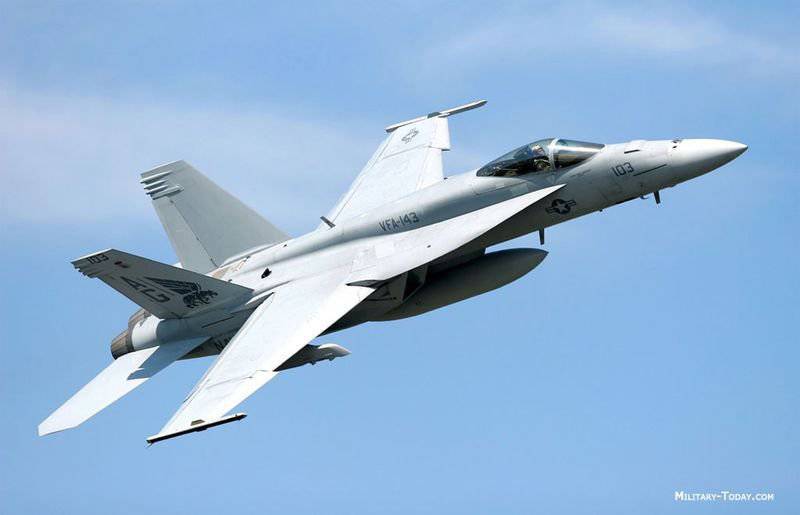 The export version of the Super Hornet fighter is the basic version of the US Navy aircraft, which in its modern version includes a number of the latest elements of the concept that Boeing presented at the Aero India-2011 cabin. This concept implies an improved widescreen cockpit display and potential access to such modern technologies as the conformal arrangement of fuel tanks and weapons. Although according to the confessions of the Boeing specialists, they have not yet made a decision regarding the latter regarding foreign customers. Also, do not forget that the “Super Hornet” is the only fighter in the tender, except for “Rafal”, which is equipped with a radar with an active phased antenna array (AFAR).

Americans have trumps on the unification of weapons systems, since the Malaysian Air Force already has Hornet fighters. Such unification will provide a significant gain in terms of training, operation weapons, logistics, etc. In addition, Malaysia is well acquainted with the company "Boeing" on the current modernization of the "Hornets", which are in service with its air force. Also, the fact that the Super Hornet is already in service with the US Navy and the Australian Air Force can play a role, which increases its potential for interoperability.

Despite the fact that none of the countries in the region have Typhoon fighters, its potential capabilities are known to customers. The first foreign deployment of these aircraft was carried out in the framework of the regional exercises "Bersam Lima-2011". As part of these 4 exercises, the Typhoon fighter of the 6 squadron made 70 sorties and spent hours in the sky for 164 hours, reaching 100% readiness during the exercise. 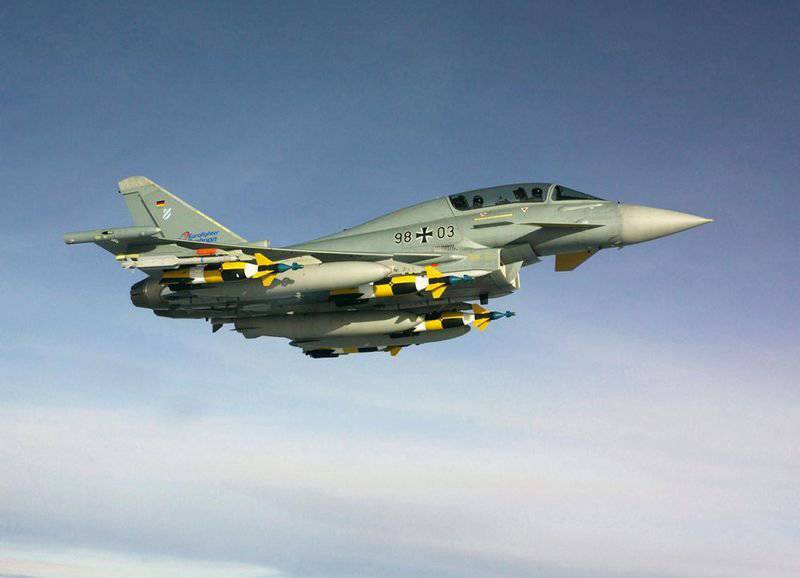 According to the representative of the company “BAE Systems” Andy Latham, the Typhoon fighters are highly versatile, which makes it possible in the future to adapt this platform to different situations and to use it depending on what is happening in a particular part of the world or in the area of ​​national interests. In 2012, Malaysian military pilots visited Great Britain and made familiarization flights on the Typhoon fighters of the British Air Force. At the same time, statements were made that this fighter meets the conditions of the announced tender.

By analogy with the American "Boeing" company "BAE Systems" emphasizes the potential benefits of the transaction for the Malaysian industry. The presented package for the Typhoon fighter is quite comprehensive. This offer is not prescriptive and includes a large number of options from which the customer can choose the one that suits him best. The package of proposals is not limited to direct deliveries of fighters, great attention is paid to opportunities in the field of professional and educational skills, cyber security. One aspect may be the inclusion of the Malaysian industry in the chain of suppliers of components for the Typhoon fighter.

Although the French company Dassault has not yet commented on the participation of the Rafale fighter in the Malaysian competition, several of the company's recent industrial cooperation deals that have been concluded in this region indicate that the company is striving to build on the success of its fighters after a fairly large victory in India tender for the supply of 126 fighters (the total amount of the order of 15 billion dollars). The French fighter bypassed the Typhoon in the Indian tender at the expense of more low cost procurement, maintenance costs and operation throughout its life. In addition, the company Dassault concluded a memorandum of intent with the aerospace company Zetro, which acts as a provider of support for ground electronics and avionics of the Malaysian Air Force. 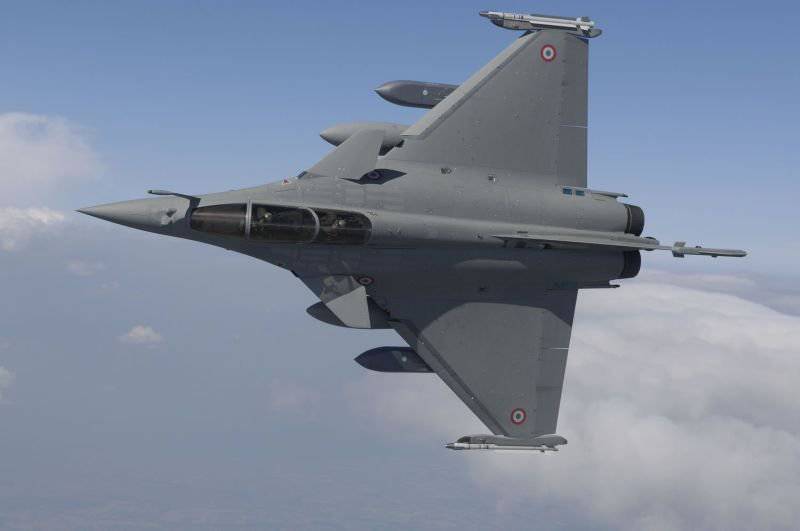 The Rafale fighter, like the English Typhoon, has experience in combat use in Libya in the 2011 year. Its main difference from competitors, as well as the American “Super Hornet”, is the presence of on-board radar with AFAR. At the same time, similar radars for Gripen and Typhoon are still at the creation stage.

Recently, the Swedish fighter Gripen has found itself in the international market. Only in 2012, the Swedish company Saab extended the lease agreement with Hungary, continued successful deliveries of fighters to South Africa, at the same time Switzerland decided to purchase the Gripen-E 22 aircraft, and the Swedish Air Force signed a contract to supply the Gripen -E / F ".

Malaysian Swedish manufacturer is ready to offer the model "Gripen-NG", which is a modification of the Thai fighter. A successful deal to sell Thailand 12 "Gripenov", as well as 2-s of AEROA aircraft "Saab-340" "Eriay" can give the company hope for the success of the new deal. The fact that Gripen is the cheapest bidder plays into the hands of the Swedes. In this case, not only at the price of direct sales, but also operation. No one excludes the fact that price can be a decisive factor in a future deal. 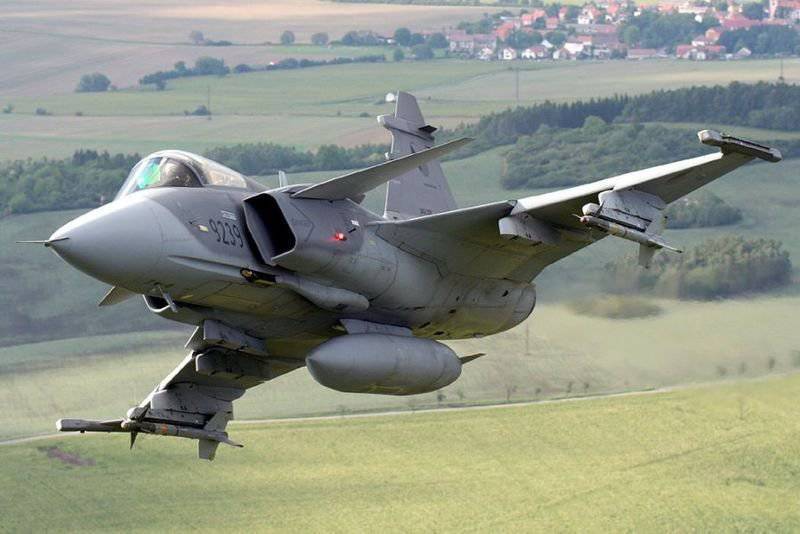 The platform of the Gripen-NG fighter has a number of innovations compared to previous versions of the aircraft. These include the new radar with AFAR ES-05 "Raven (in development), the new F414G engine of General Electric (capacity increased from 80,5 kN to 98 kN) and increased from 6000 to 7200 kg the maximum payload of the aircraft.

During the exhibition LIMA 2013, the deputy general director of Rosoboronexport, Viktor Komardin, said that Russia was ready to promote the advanced Su-30MKM fighter to Malaysia. However, Western experts are skeptical about the possible victory of the Russian fighter. In part, such skepticism is associated with maintenance problems with the Su-30MKM fighters already delivered to Malaysia. According to the deputy general director of Sukhoi, Alexander Klementieva, at the moment the operational readiness of the aircraft data fleet is lower than the standard required by Malaysia in 75-80%. In reality, out of the 18 aircraft delivered to the country at the time of the LIMA 2013 exhibition, the 10 was in combat status, and the 2 fighter had a flight limit due to the engine overhaul life.

To resolve this problem, the Russian holding company “Sukhoi” has signed a contract with the Ministry of Defense of Malaysia for servicing the Su-30MKM fleet. This contract worth 100 million dollars provides for service and maintenance, as well as the supply of spare parts for 18 Russian fighter jets, delivered in 2007-2009 years. The deal will extend the life of the aircraft engines, increase the operational readiness of the Malaysian Su-30 fleet and adjust the maintenance required by the standards. Why both parties to the deal did not agree on such cooperation earlier is a mystery. 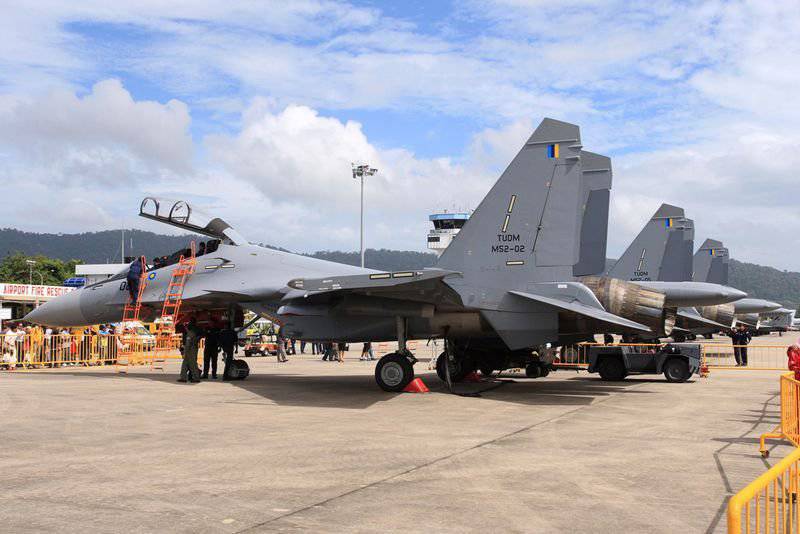 In addition, Rosoboronexport is promoting a subscriber maintenance program for Su-30MKM fighters. According to Komardin, within the framework of such service, Russia will provide 75% of the combat readiness of the delivered fighters, and the remaining 25% of simpler tasks from a technical point of view will be performed by local specialists. This program provides for the permanent residence of Russian engineers in Malaysia with their families, the provision of housing, medical care and other social services.

The advantage of Russian fighters is the fact that they will ensure the uniformity of the Malaysian Air Force fleet. The acquisition of another large batch of Su-30 would be the best step towards this goal. One should also take into account the fact that Malaysia already has a training center and a service center for the maintenance of the Su-30MKM, in which Kuala Lumpur has already invested considerable funds. In this regard, the acquisition of fighters from other states would not be entirely economically justified.

Many Western experts agree that the existing 18 fleet of Malaysian Su-30MKM assumes that the acquisition of a new batch of these machines will simplify the logistics chain for the Malaysian Air Force. They also pay tribute to the capabilities of the aircraft, noting the prospects of this platform, which has an increased payload, increased combat range, a thrust vectoring engine of the AL-31F type and a radar with a passive phased antenna array N011M.

Ctrl Enter
Noticed a mistake Highlight text and press. Ctrl + Enter
We are
Two "achievements" of the MMRCA tenderInstead of MiG-35 126 fighter jets Rafale
35 comments
Information
Dear reader, to leave comments on the publication, you must to register.