April 27 2013
13
Most of the enterprises engaged in aircraft repair, has already published annual financial statements for the past year. I made an overview of the activities of enterprises in the industry based on them. I will begin with the data on the activities of subsidiary affiliates of Aviaremont OJSC last year.


150 aviation a repair plant located in the Kaliningrad region handed over to the Ministry of Defense of Russia in 2012 six helicopters and one aircraft. It is worth noting that all helicopters (two Ka-27s and four Mi-24s) were delivered according to the State Defense Order of the past, 2011. And on the only Tu-22M3 delivered, the second phase of the overhaul was supposed to be completed two more years earlier - in 2010. The three-year contract concluded for the repair of long-range bombers back in January 2008 was finally fulfilled (I wrote about the problems of the implementation of this agreement earlier in LiveJournal). 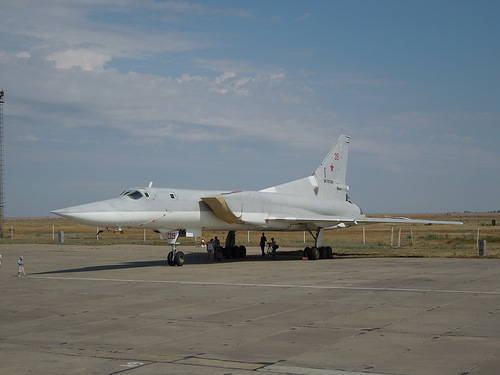 Tu-22М3 at the Akhtubinsk airfield after repairs lasting several years

The state defense order 2012 of the year was planned to repair at this enterprise 15 helicopters. The military department should have handed over five Ka-27, seven Mi-24 and three Mi-8. In fact, none of them was delivered on time. The main reasons for the non-performance of GOZ-2011 are the receipt of repairs to aircraft that are not complete and equipped with unrepairable and out-of-date units and aggregates. The contract with Aviarepair for the maintenance of Ka-27 and Ka-29 naval aviation helicopters also turned out to be unfulfilled, under the terms of which the work had to be carried out on 35 machines. Despite this, there was an increase in the volume of work on the GOZ, since the year before the Russian Defense Ministry received from the 150 ARZ only two Mi-8 helicopters. In monetary terms, the company's revenue for the state defense order increased almost fourfold - from 62 to 238 million rubles. 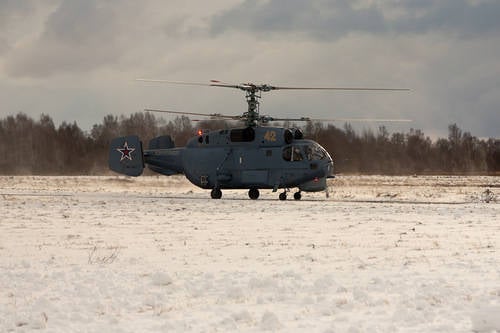 Located in the village. Gorelovo 419 ARZ conducted repair of 42 helicopters. The Ministry of Defense received 39 of them - 15-e Mi-8, 20-e Mi-24, four Ka-27, a year earlier, the military department transferred two times less helicopters from the repair at this plant - only 19-t. 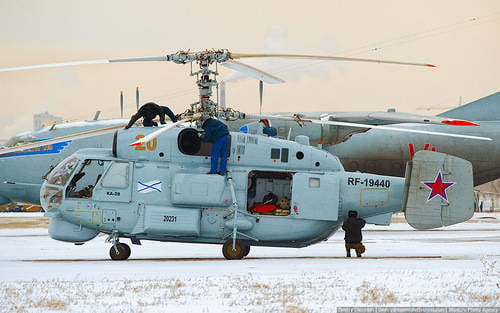 Two Mi-24s for the Ministry of Internal Affairs of Russia (six in 2011) and one civil aviation Mi-8 were also commissioned (three a year earlier). For the first time in the last few years, 419 ARZ did not repair aircraft customers of foreign customers, while at the same time, eight Mi-24s for Sudan were handed over a year earlier. In addition, in October 2012 of the year, a contract was concluded for the repair of one Ka-27 helicopter of the FSB aviation. 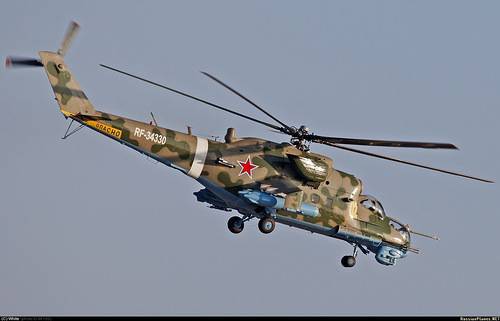 The volume of repaired aircraft for state defense orders and the Chita 810 aircraft repair plant increased. Last year, Russian air forces received 10 helicopters of the Mi-8 family and seven Mi-24 helicopters. The previous year, their numbers were 2 and 9, respectively. The repair of the Peruvian aircraft was also completed under a contract with Rosoboronexport dated September 2010 of the year, providing for the repair of six Mi-25 and two Mi-17. Despite the smaller number in comparison with the volumes of the state defense order for their repair, the company received a large amount - 717 million rubles. against 494 million rubles. on GOZ. 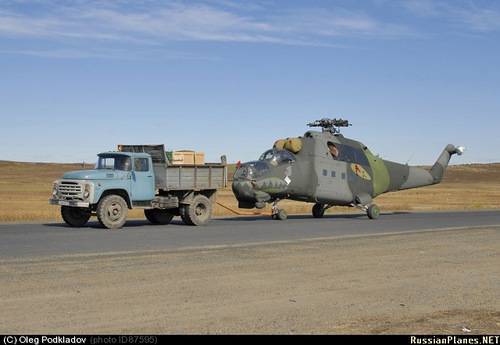 Traditionally, 356 ARP from Engels does not publish detailed data on its work. It is known from the materials of the public procurement site that last year the company repaired the only Mi-8 helicopter of the FSB aviation with the 95942 serial number. Aviaremont OJSC signed a state contract for the overhaul of two Mi-8MTV-2 helicopters of the aviation of the internal troops. The direct performer of the work was 356 ARZ. 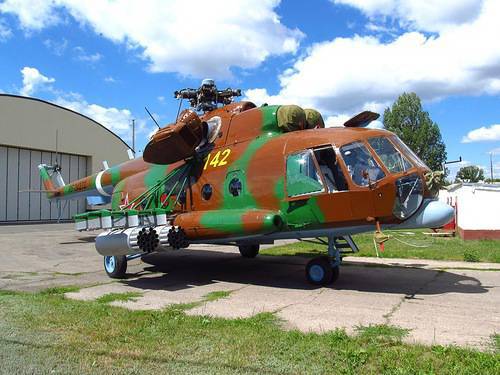 20 aircraft repair plant from the city of Pushkin in the framework of the state defense order completed the repair of 11 aircraft. The Ministry of Defense received seven Su-27 instead of 11-ti, and of the five handed in were from GOZ-2011 debts. From spotter snapshots it is known that at least three of them were modifications of the Su-27 (the aircraft with the number RF-92367 received training airbases in Kushchevskaya, the second with the number RF-92221 was transferred to the airfield Akhtubinsk to the Air Force Main Flight Test Center, another RF-92426 entered the Hotilovo air group). Otkapitalennye "Sparky" were transferred to the Lipetsk Aviation Center (RF-92198) and "Russian Vityaz" (onboard №20). The fate of a fairly well-known match with RF-92431 number painted in gray livery remains unclear. According to some reports, it has not been transferred to the customer to date.

The only Su-XNUMHUB in new gray livery, painted into it after repair on 27 ARZ

Of the IL-18 family of aircraft, only one IL-20PT of the Northern Fleet with a 173011503 serial number, which flew before the repair with the registration of the RA-75478 and replaced it with RF-75344, was timely transferred to the customer. 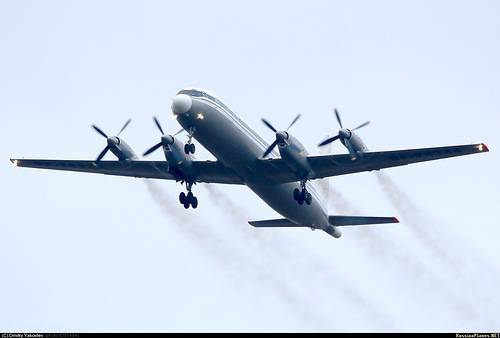 IL-20PT, transferred to the Northern Fleet Aviation in October 2012 after repair on the ARZ in Pushkin

Three IL-22М11 (according to aviation photography sites are airplanes raised after long storage - RA-75909 from Akhtubinsk, RA-75898 and RA-75927 from Levashovo), IL-18 and IL-20 were not promptly repaired. Judging by the photographs, IL-18 with the number RF-75478 (before the repair flew with the prefix RA) was transferred to the Air Force only in March of this year. 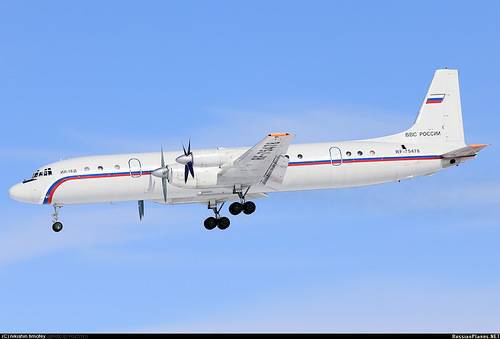 At the end of the year, the GOZ remained unfulfilled in other types of aircraft that underwent repairs at 20 ARZ, so three Su-24МР instead of four were repaired, none of the three Su-24М according to GOZ-2012 was handed over. The main reasons for the disruption of the performance of the GOZ are the late delivery of aircraft for repair, delays in the preparation of documents for delivery for repair, non-compliance with the deadlines for the manufacture of parts for carrying out work on bulletins from KNAAPO im. Gagarin.

Problems with the execution of the defense order also arose on 275 ARP from Krasnodar. At 2011-2013, this company signed a contract with Aviaremont back in March, 2011. According to its conditions, work on more than 2012 billions should have been completed in 1,5. rub. These include the repair of 20-ti-39 (including ten with delivery in 2013 g.), 12-ti Mig-29 (UB) and three Su-27 (UB). This contract is executed only by half, the output of products on 751 mln. Rub. due to delays in the supply of parts for the execution of bulletins and spare parts from suppliers, including those named by RSK MiG and the Czech Aircraft Industries.

In contrast to these enterprises, all contracts on state defense orders 514 aircraft repair plant from the city of Rzhev last year were executed, according to the reporting, in full. The Russian Air Force received three MIG-31 and ten Su-24M / MR family aircraft from repair, the cost of the work performed was more than 693 million rubles. The share of the state defense order was 45%, the remaining amount of revenue was received for the repair of weapons and military equipment under direct contracts, apparently referring to work for foreign customers. Like a year ago, the situation remains with the transfer of work on upgrading Su-24М bomber to Su-24М2 and Mig-31 fighters to Mig-31BM with NAPO im. Chkalov and the NSC "Falcon" on 514 ARZ, which was repeatedly reported in the press.

Unfortunately, the statements of a number of Aviaremont’s subsidiaries contain only financial indicators of the enterprises' performance without indicating actual production volumes. So, 123 aircraft repair plant from Staraya Russa received revenue in 3,3 mdr. rub., including for repair work on aviation equipment - almost 2,8 mldr. rub. According to spotter images, at least X-NUMX Il-12MD aircraft of the Russian Air Force underwent repairs in 76 at this enterprise. From the register of state contracts it is known about the delivery in 2012 of one aircraft of the Ministry of Interior aviation with the serial number 2012-74 (RA-02) with a contract price of 76803 mln. Rub. and one IL-105TD of the FSB Aviation with a serial number 76 (RF-1023411370) with a price of 76326 mln. rub. The cost of repairing aircraft for export amounted to 142 mln. Rub. (without VAT). Also, the plant underwent repairs of the Il-237,8, including the Il-76 Indian Air Forces with the number K76 and the Algerian 2902T-WIT. 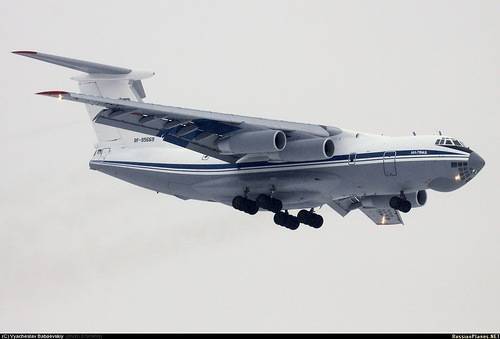 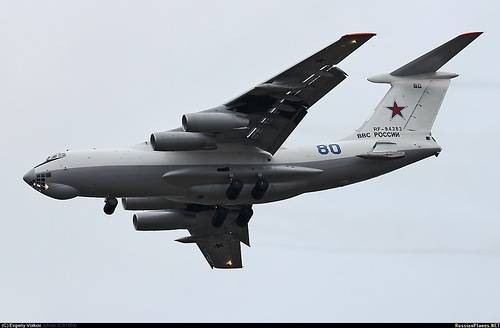 121 ARP from Kubinka near Moscow received revenue in 2,9 mldr. rub. (without VAT), of which 2,1 is obtained for the repair of aircraft. As it is known, this company fulfills a three-year contract concluded by 7.11.2011 for the modernization of the Su-25CM, according to the terms of which 2012 machines with the cost of 16 mdr should be commissioned in 2,034. rub. In addition, it is known about two repaired Su-25UTG Naval Aviation and several attack aircraft of the Air Force of Turkmenistan. 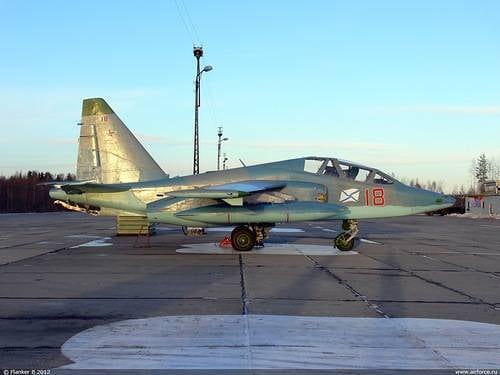 Su-25UTG of a separate naval aviation regiment of the Northern Fleet, which was overhauled in 2012 year 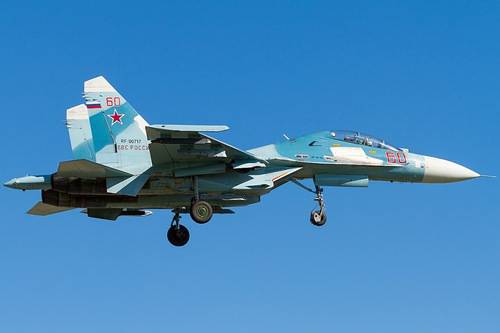 Su-XNUMHUB, transferred after repair to ARZ in Vozdvizhenka air group, based near Vladivostok

In addition, the Knevychansk branch of the plant carried out repairs to the MiG-31 fighters and Ka-27 helicopters. 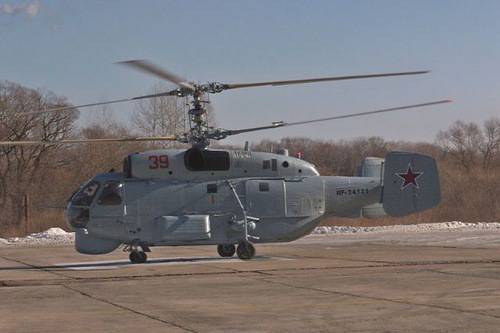 308 ARZ from Ivanovo received revenue in the amount of 953 million rubles, significantly exceeding the results of 2011, when the amount of revenue was only 163 million rubles. According to the register of contracts in the reporting year, the plant passed the An-72 RF-72018 aircraft depot from the repair of the aviation of the FSB. No.36576094880, and Aviation Ministry of Interior - An-26 RF-56307 with the head. No.1501. 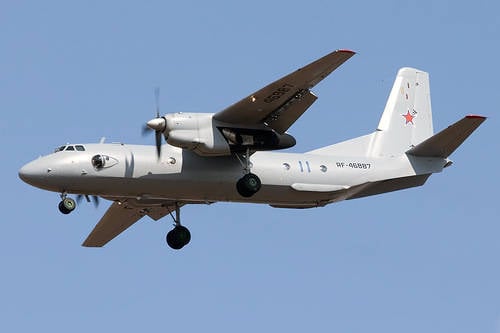 An-26 of the Naval Aviation Aviation Group from Knevichi, which was repaired at the ARZ in the city of Ivanovo in 2012 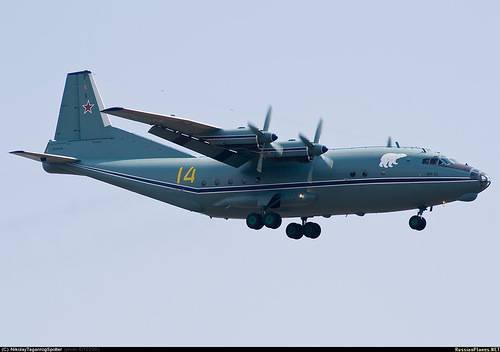 An-12PS Maritime Aviation during fly-over after repair on 325ARZ

The Rostov Civil Aviation Plant No. 412 repaired the 2012 of the Tu-6 aircraft and four An-134 aircraft in 26 year. The RA-134 plane of the FSB of Russia (serial number 65994) was awarded to the Tu-66207, the repair contract for which was awarded to 12.12.2011 for the sum of 48 million rubles. At least three aircraft of the former Chelyabinsk Aviation School of Navigators (Tu-134Sh with on-board numbers 20 and 37, Tu-134UBL No. 28 blue) were also handed over, the remaining two aircraft were transferred, apparently to other Russian Air Force units. The FSB Aviation also transferred two An-26 airplanes - in April No.8907 after the third overhaul under the contract from 6 June 2011 and No.9703, which was repaired, according to the register of contracts, by November 2012. 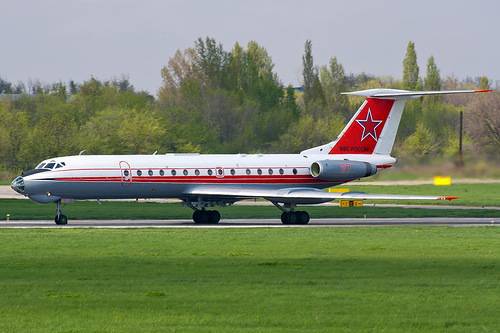 Novosibirsk Aircraft Repair Plant received the proceeds from the repair of helicopters of Russian customers in 1,4 mldr. rub., for export - 632 mln. rub. From the register of state contracts it is known about the delivery of two Mi-26 helicopters to state aviation structures: the FSB contracted by 4 on October 2011 of the last year received after the second repair of the Mi-26 helicopter head. №34001212473, and Ministry of Emergency Situations - helicopter RF-32822 head. No.34001212615 under the contract concluded in February of this year through the Helicopter Service Company. Two helicopters received police squadrons - under the contract from 13.09.2012, Altai arrived from the first repair of the Mi-8AMTSH RF-28980, and the UMVD in the Novosibirsk region was transferred to the Mi-31T RF-8 in October under the contract from 28969 October. 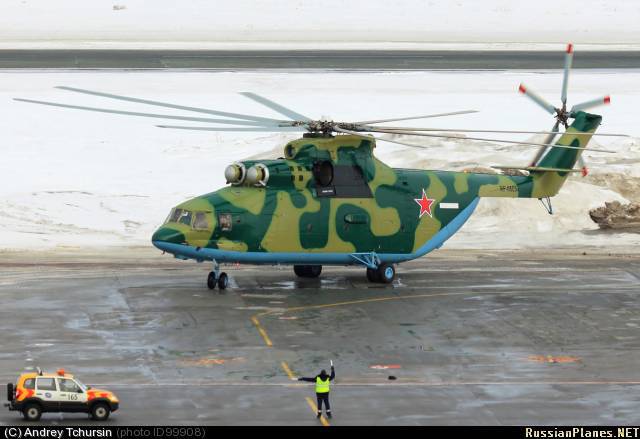 The Mi-26 helicopter of the FSB repaired at NARZ.

The Omsk civil aviation plant in 2012 repaired 47 helicopters (transferred to 41 customers), four of them were Mi-8MTV-1 modifications, two were Mi-171, one was Mi-17, and the others were Mi-8Т. According to the register of contracts, this company did not have any state customers last year.

The St. Petersburg aircraft repair company does not publish reports in open access. At the same time, according to the register of contracts in 2012, this enterprise repaired three helicopters for the Emergencies Ministry of Russia (Mi-8MTV-1 RF-32781 head 96652, Mi-8MB RF-32820 head 94082, Mi-8MT RF-31356 head. 94564), two for the “Russia” organization (RA-27016 and RA-27017). as well as the Mi-8T RF-28965 Samara police. In addition, it is possible that this enterprise also participated in the co-execution of the state defense order for the repair of Mi-8 helicopters by the Russian Air Force. 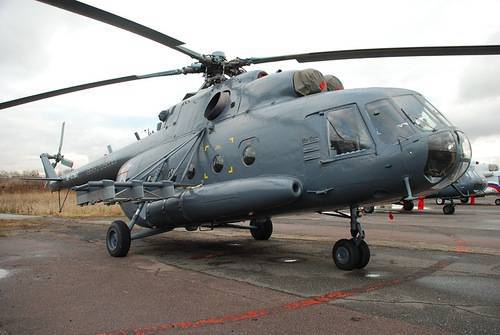 Ctrl Enter
Noticed oshЫbku Highlight text and press. Ctrl + Enter
We are
Tu-22M3: time to retire?An-12 in Afghanistan
13 comments
Information
Dear reader, to leave comments on the publication, you must to register.