April 24 2013
45
Heavy armored personnel carrier based tank The T-55 was first shown at the 2nd VTTV-97 exhibition. Designing the car, taking into account the heavy urban battles of the first Chechen campaign, the Omsk Design Bureau of Transport Engineering in a fairly short time designed and built a tracked armored personnel carrier, "utilizing" the chassis of the outdated T-55 medium tank. It should be noted that the work was carried out on an initiative basis, based on our own funds. The result was a combat vehicle that was not inferior in terms of protection, but superior to the main battle tanks T-80 and T-90 in terms of mine protection. The prototype was demonstrated at Omsk exhibitions with various weapon systems: 30mm 2A42 gun + ATGM or 12,7mm Utes machine gun + ATGM. The name also “sailed” from BTR-T to the DPM patrol and patrol car and back, the first option took root, because in fact, this is a highly protected vehicle designed to deliver soldiers to the battlefield. In the current conditions, the price of a “product” is also of no small importance, and in this case it is relatively low. T-55 in large enough quantities are still stored in warehouses, but their "stock" is gradually harassed anyway, either cut into smelting, or handed out to new "friends." (Apparently, no one was apparently looking for a financial component in the transfer of tanks to the Afghan “northern alliance”, from the very beginning it was clear that the Afghans had nothing to pay, not in dollars from the sale of drugs, in fact.) A whole series appeared about BTR-T critical articles in which the authors fairly, in general, pointed out flaws, they say, the landing is not enough, the armament is weak. 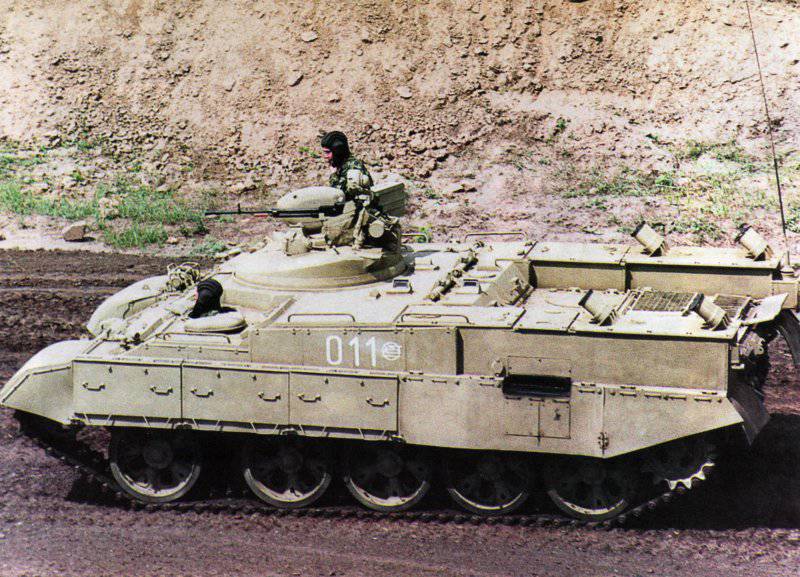 A heavy BTR-T armored personnel carrier during a demonstration at the exhibition VTTV-2003, Omsk, June 2003

Heavy armored personnel carrier BTR-T on the track of the landfill. Omsk, June 2003 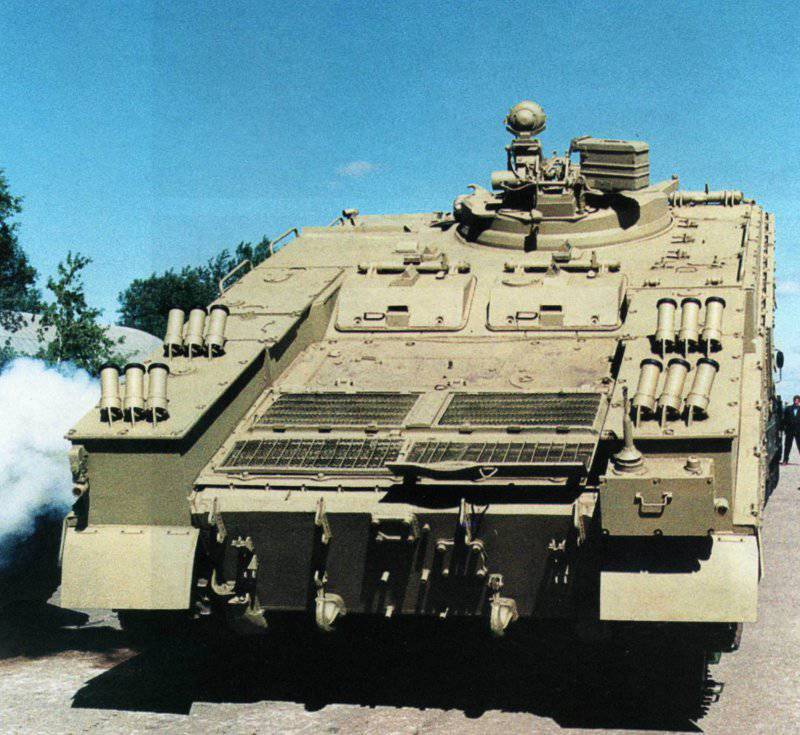 BTR-T enters the conveyor to be sent to the landfill. Omsk, July 1999

Someone demanded to install dynamic protection also on the roof, while others, on the contrary, demanded that the roof be removed completely for a better view.

But the army in Chechnya continues to ride the BMP-1 / 2 and the BNR 70 / -80, and, moreover, on horseback, because their armor practically does not save anything.

The Israelis, whose experience in the KBTM was probably taken into account, are in a state of prolonged armed conflict with the Palestinian population. In urban military operations, heavy tracked armored personnel carriers “Ahtsarit” are widely used, converted from medium-sized T-54 / -55 tanks captured during previous Arab-Israeli conflicts. According to the Western press, the number of such machines reached, almost to a thousand! This is not surprising if we consider that the first BTR of this type appeared already in 1987. From 44 t. The total mass of the vehicle is more than 14 t. It comes to protection, and the armament consists of one remotely controlled machine gun FN 7,62 М240 (three more can be installed in the simplest mounting at the upper hatches, but shoot from them can only leaning to the waist). The more compact Detroit Diesel 8V071 TTA engine, combined with the Allison XTG-411-4 semi-automatic transmission, allowed developers to re-arrange the MTO, providing space for the rear "tunnel" to ensure the safety of leaving the car under fire. Well, yes, by the way, you can’t even project for unlimited American loans. We need to proceed from our real capabilities, and not from good wishes, to install the Arena system, a thermal imager, a more powerful gun, a mortar and MANPADS. Directly "Mure and Meriliz" turns out, as Comrade Stalin rightly noted in one of his works (albeit for a completely different reason). And who will pay for all this "splendor"? 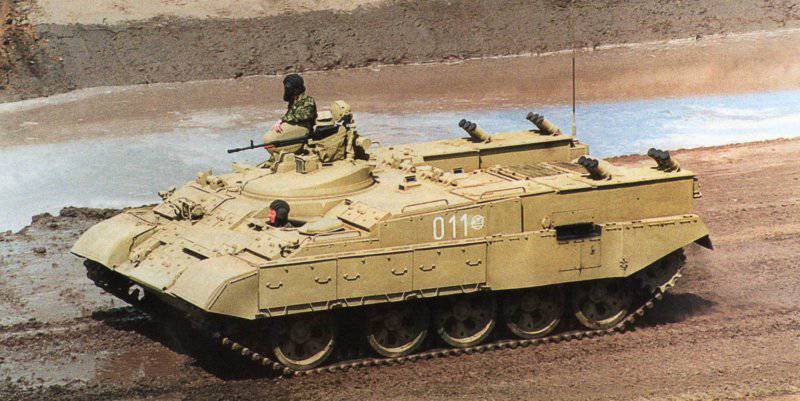 BTR-T on the track of the landfill during the show at the exhibition of ERW-2003. Omsk, June 2003 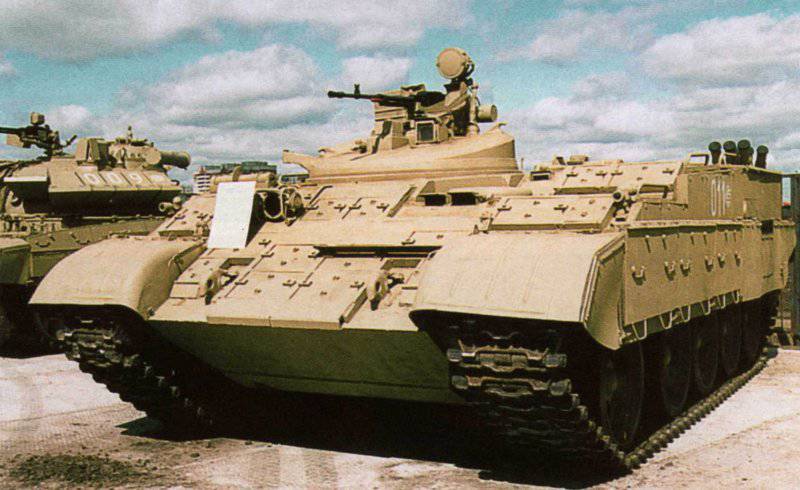 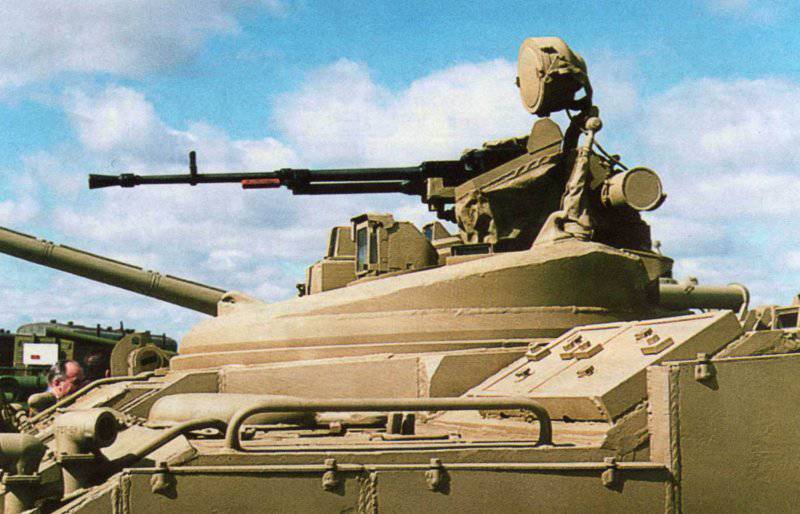 View of the tower with the armament of a heavy armored personnel carrier BTR-T from the left side. Omsk, June 2003 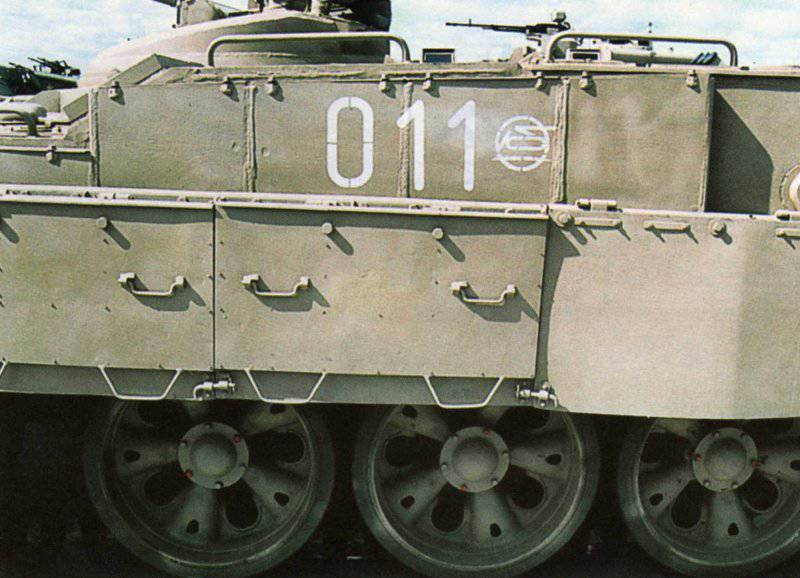 The BTR-T armored personnel carrier has enhanced protection not only in the front, but also along the sides. Omsk, June 2003 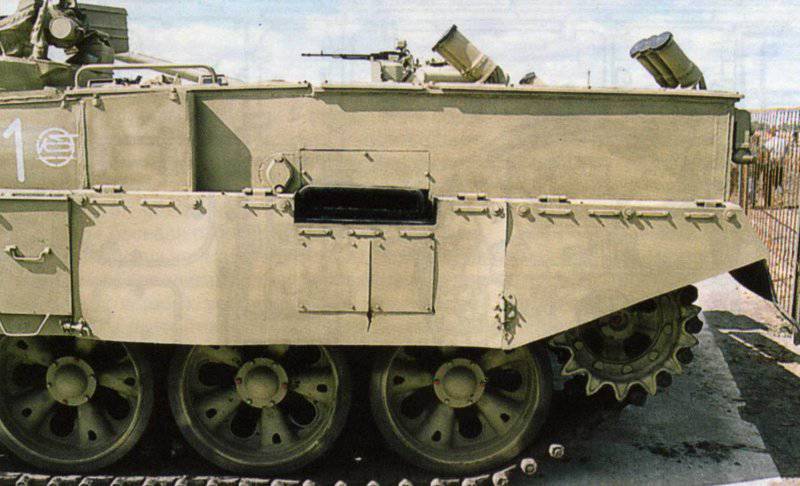 On the BTR-T additional fuel tanks DPM, in contrast to the base tank T-55, hidden under armor. Omsk, June 2003 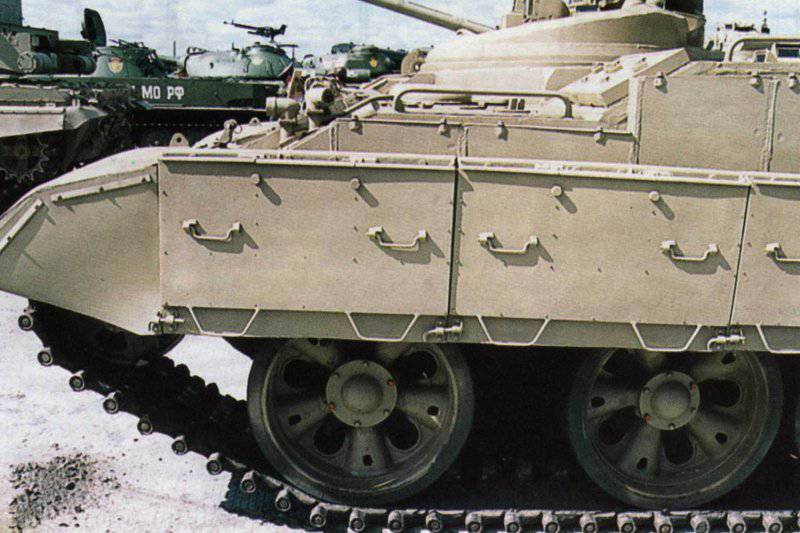 The lower part of the body of the BTR-T, in addition to rubber-fabric screens, has additional protection in the form of steel plates for the entire length of the transport-combat compartment. Omsk, June 2003

In the meantime, the BTR-T, remaining in a single copy, was used by the KBTM officers when traveling to the landfill as a super-passable "taxi". During the demonstration of new images of heavy flamethrower systems to the customer’s representatives, the car caught the eye of one of the generals of the chemical defense forces, who, having familiarized himself with the technology closer, immediately declared that he wanted the same, only better. Moreover, he managed to “break through” the financing of the new theme, and as a result a BMO-T flamethrower fighting machine appeared on the T-72 chassis. Until now, flamethrowers in battle were forced to move on BMP, which deciphers as "infantry grave of infantry," and even the additional stuffing from "Bumblebees" and undermined, guaranteed to destroy all life, not only in the car, but around. 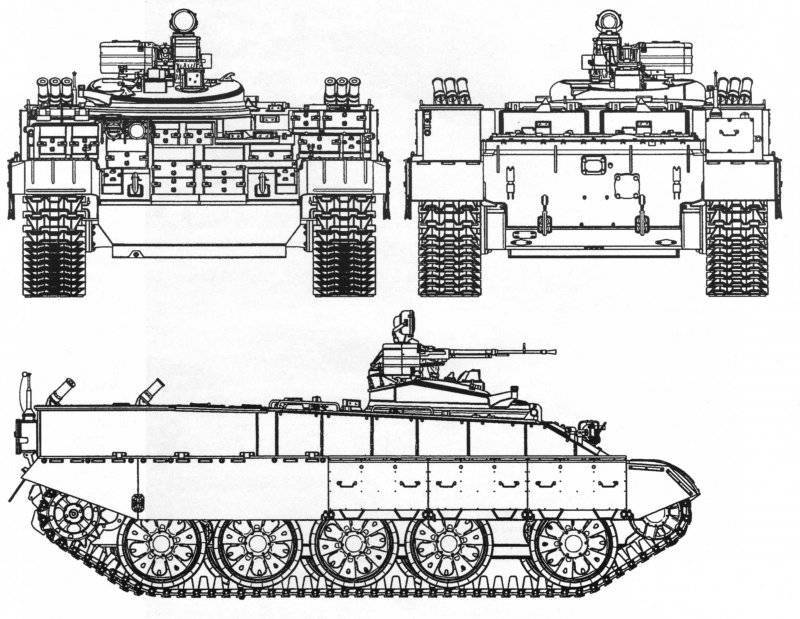 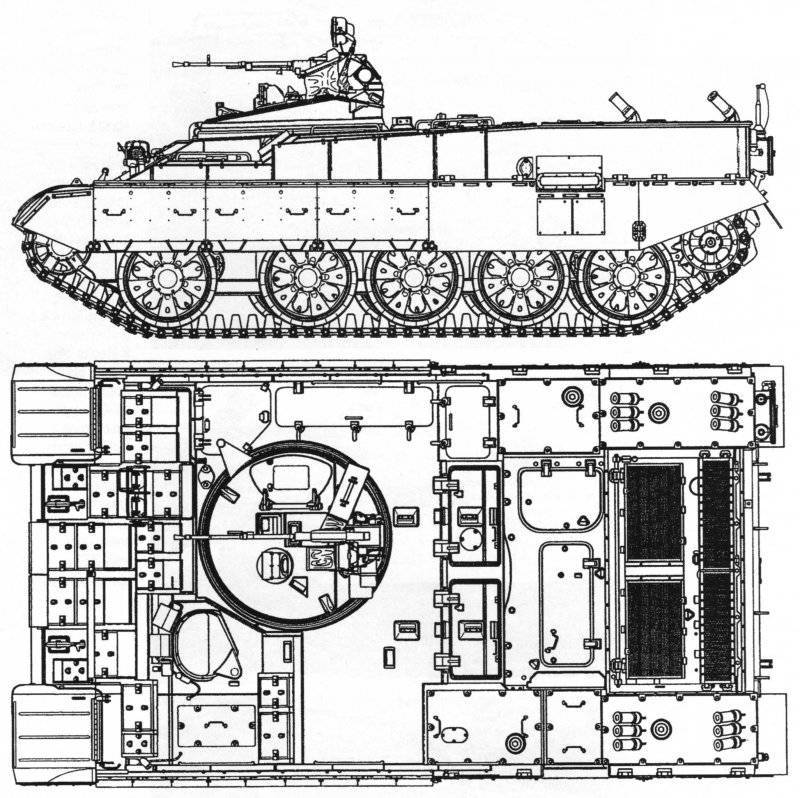 The drawings of the heavy armored personnel carrier based on the T-55 tank were completed by V. Malginov. 1 scale: 35

The place of the tank turret was occupied by a larger cabin than on the BTR-T; instead of a specially designed turret, a standard commander's hatch with a turret for the 12,7 mm machine gun, used on “seventy-twos”, was installed on the roof. Steel screens (T-90 type) now cover the lower part of the body for almost the entire length. The increased height of the armored boxes with additional fuel tanks on the futon shelves on the sides of the logistic platforms not only increases the safety of leaving the car through the rear hatches. A kind of armored "trench", resulting from the wheelhouse and the sides around the roof of the logistic system, allows you to fire "Bumblebees", not dismounting. The target range of fire is up to 600 m, and the maximum is up to 1000 m, which gives advantages in battle with the defeat of pillboxes or firing points in urban areas. Production of BMO-T can be called small-scale.

It was not accepted for service and was not exported. Initially, an insufficient number of paratroopers — 5 people — were attributed to the main shortcoming of the BTR-T.
http://btvt.narod.ru/4/t_btr_russ.htm 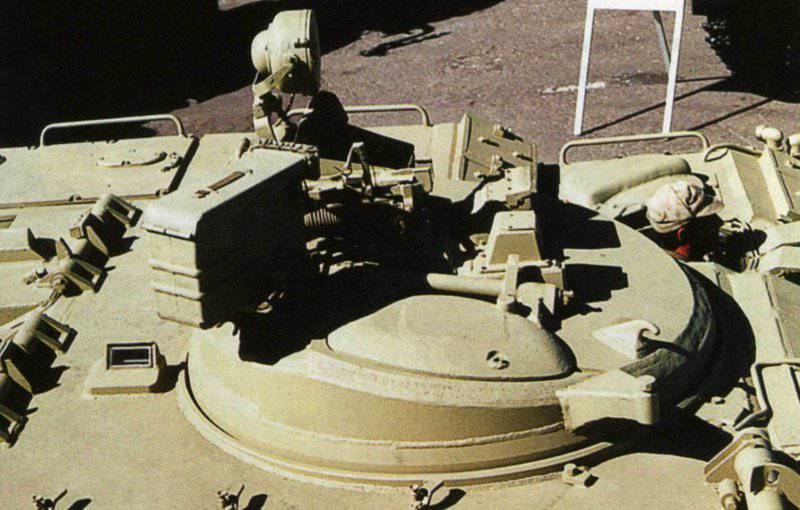 Tower BTR-T. right view. In front of the commander's hatch is the mounting bracket for the ATGM unit. Omsk, June 2003 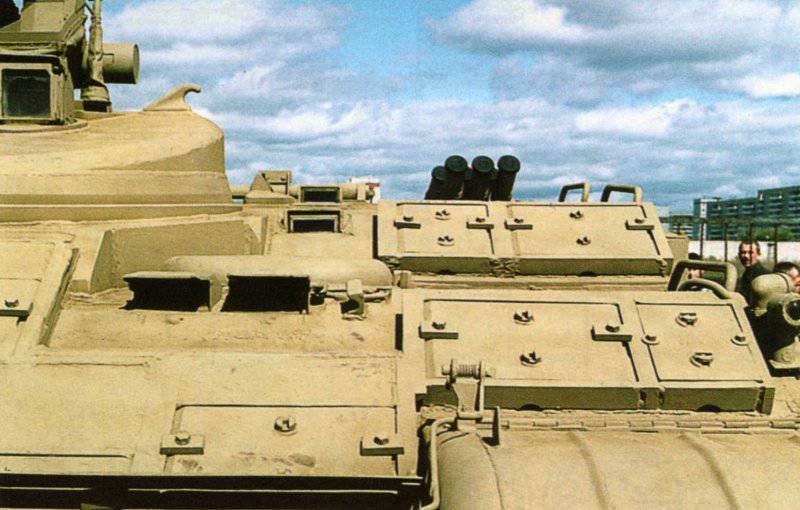 The left front part of the BTR-T hull, visible hatch and viewing instruments of the driver. Omsk, June 2003 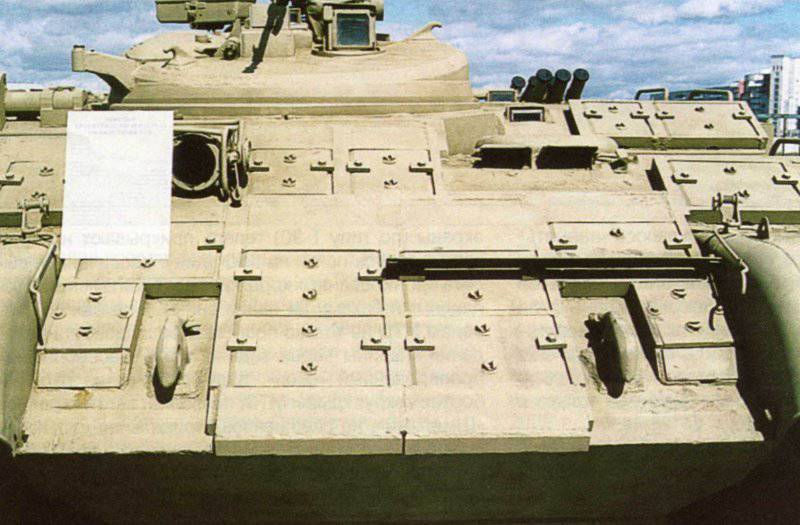 The front sheet of the BTR-T hull is equipped with dynamic protection units of the T-80U type tank. Omsk, June 2003 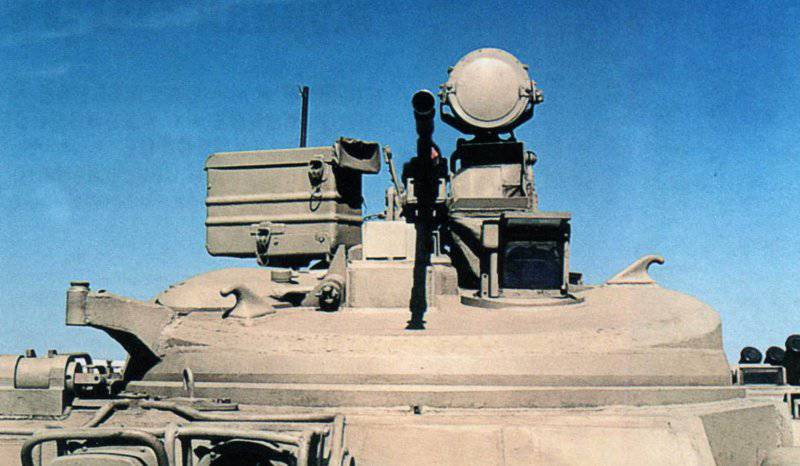 View of the tower BTR-T in front. To the left of the remotely controlled machine-gun, the 1PN22M is visible. Omsk, June 2003 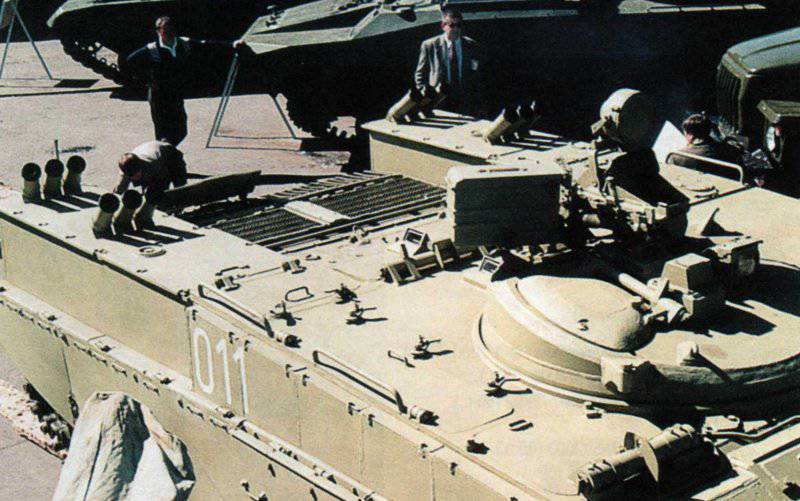 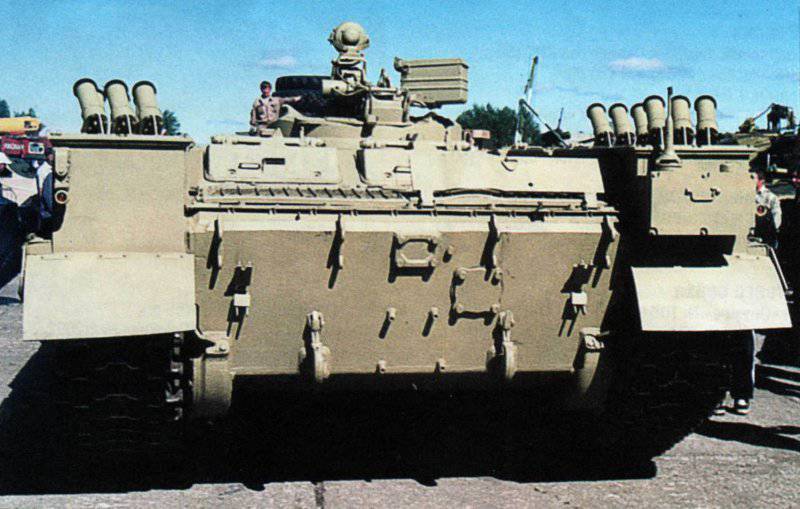 BTR-T rear view. The hull's stern leaf remained unchanged, the same as on the T-55 base tank. Omsk, June 2003