April 24 2013
54
To date, the second most abundant and combat-capable forces on deck aviation possesses France. 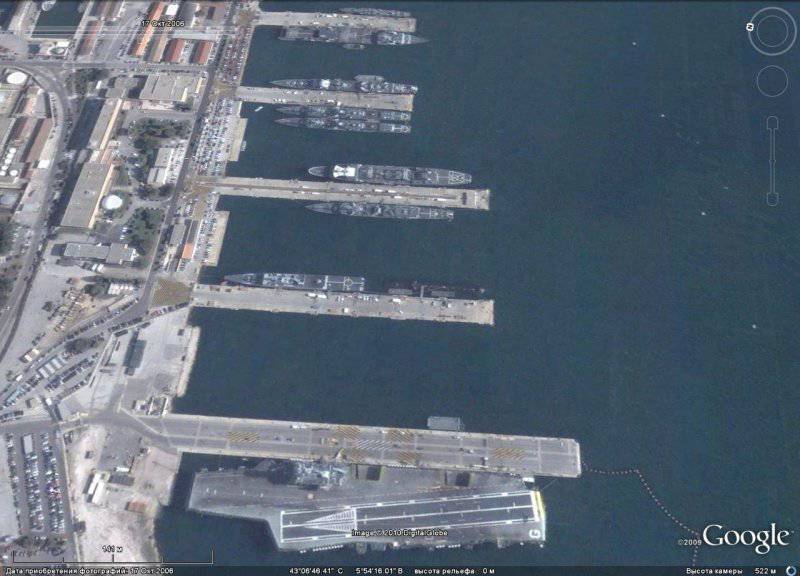 Despite the smaller displacement compared to the Kuznetsov, the number of aircraft based on it is much larger. The aircraft carrier is small compared to American counterparts. The length is 261,5 m, width 64,36 m, height 75 m. Displacement is more than 40 600 tonnes. X-NUMX AS-36 MB Panther Search and Rescue Helicopter. A characteristic feature of the air group is the predominance of strike aircraft and the absence of anti-submarine squadrons.

"Rafale-M" - deck multipurpose aircraft. It is similar to the Rafale C aircraft, but is equipped with a landing hook and a modified nose strut of variable length. 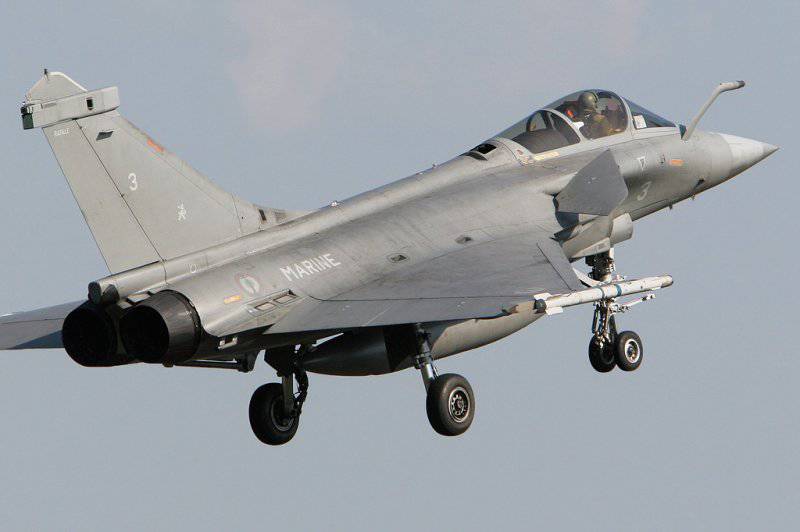 The first prototype of the Rafale M single-purpose multi-purpose carrier-based aircraft, designed by AFM (Avion de Combat Marine), made the first flight of 12 December 1991 of the year. The main difference of this modification is the weight of the structure increased by 750 kg, reinforced landing gear. Other differences include 13 suspension units instead of 14, and a maximum take-off weight (2000 kg) reduced by 19500 kg. Rafale M Standart F1 modification adopted in December 2000 year and reached full combat readiness in the year 2004. Since the middle of the 2006, the aircraft of the French Navy began to receive aircraft modification Standard F2. They, like the machines of the French Air Force, were used during operations in Afghanistan and Libya. The Navy demanded 86 machines. 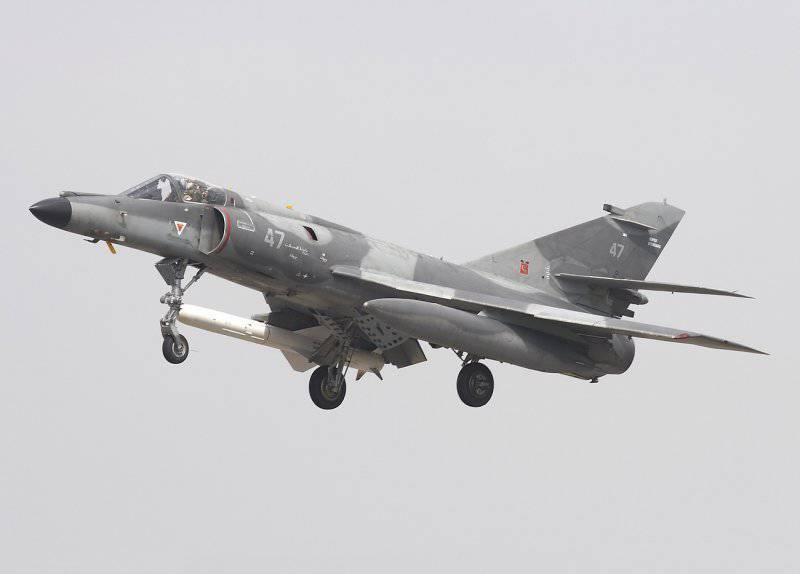 Developed on the basis of the aircraft "Etandar" IVM Made its first flight on 28 on October 1974 of the year. Built 74 aircraft. In the French Navy, aircraft of this type are removed from service, they are planned to be gradually replaced by multi-purpose fighters Rafale-M. Participated in many military conflicts.
Shipped for export to Argentina. The aircraft received great fame during the Falkland War, during which the Argentine E -Tandars, using Exocet anti-ship missiles (ASM), sank two British ships without incurring losses.

Helicopter AS-565 "Panther" - in the French Navy used as a search and rescue, transport and combat helicopter. 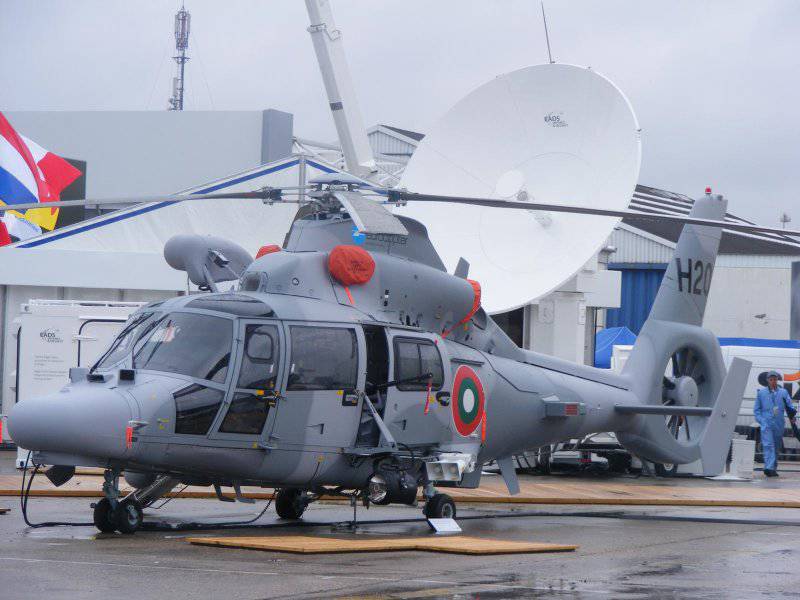 Armament, depending on the purpose of the helicopter, can include two Mistral-type Mistral missiles with an infrared guidance system, two cannon-mounted cannons with CIAT M-621 guns of 20mm caliber (180 ammunition), eight Hot or Tank-off ATGM, installation NAR caliber 70mm. Weapon kits are suspended on removable beams. For fire control, a stabilized SFIM "Vivian" sight or third-generation sights with enhanced image brightness are provided. 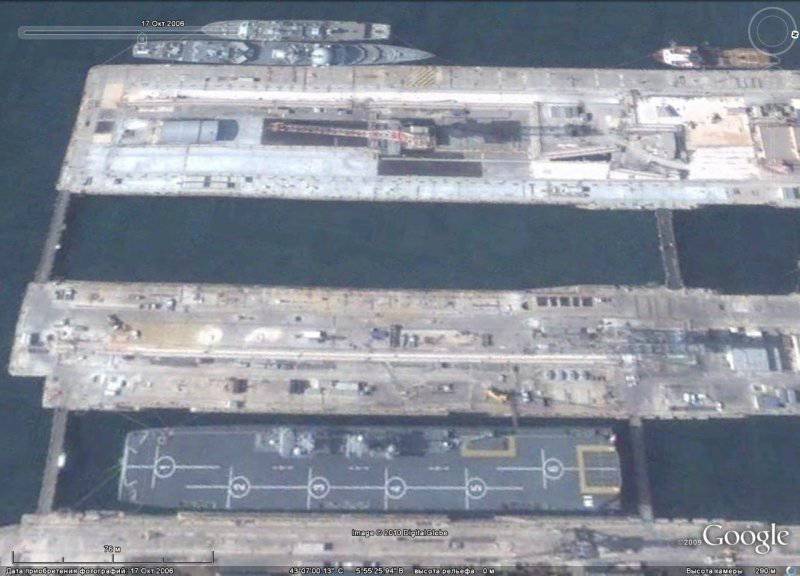 NH90 - a multi-purpose helicopter developed by the Franco-German consortium Eurocopter. 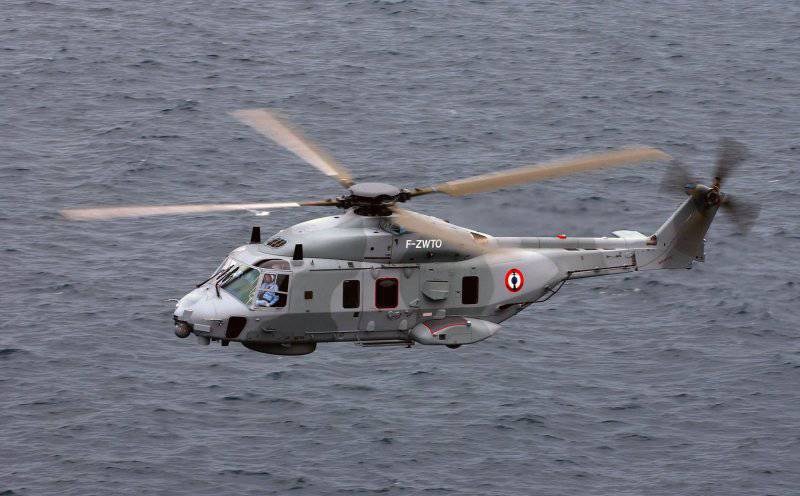 Used from the deck of the ship. May be considered a replacement for Westland Lynx or AB 212ASW helicopters.
NH90 TTH - a transport and landing helicopter, designed to solve amphibious tasks, but could be equipped to solve search and rescue tasks, including in combat conditions, for electronic warfare. 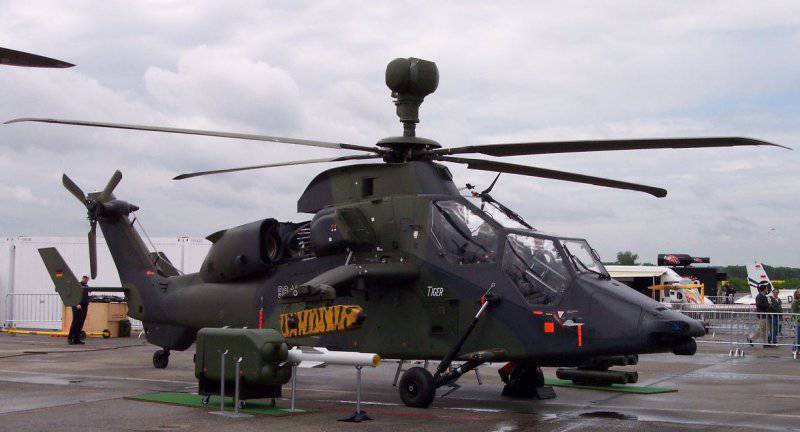 The fuselage, completely made of composite materials, can withstand the hit of projectiles of caliber up to 23 mm. The crew cabin is double, the seats are arranged in tandem. The shape of the cockpit with a sliding lamp of armored glass minimizes the reflection of light and radar radiation (the rest of the fuselage is also designed in accordance with this principle).

The helicopter is equipped with a mobile gun of caliber 30 mm with ammunition in 150 shells, 4 SD of air-to-air class and NAR blocks.
Depending on the version, the sight can be mounted above the main rotor hub or in the forward fuselage.

On landing ships of type "Food" (2-pcs), are based 4 assault helicopters AS.332 Super Puma. 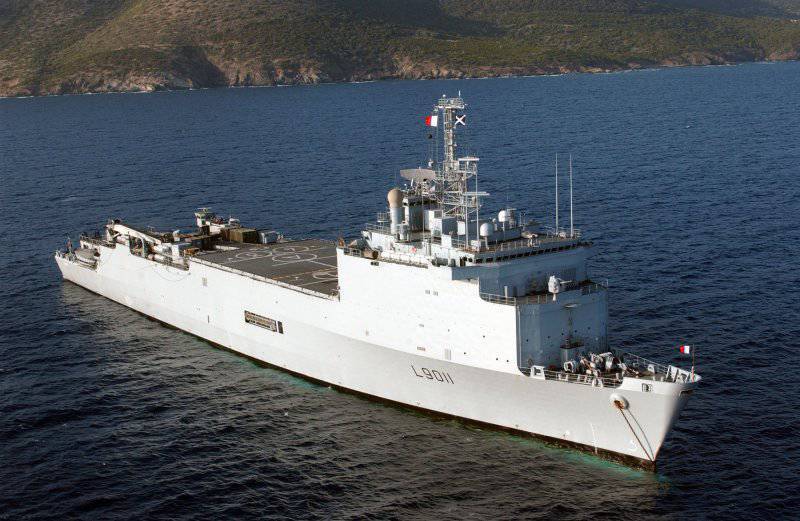 Military version of the model, AS.332B, Designed for the transport of 21 paratrooper. 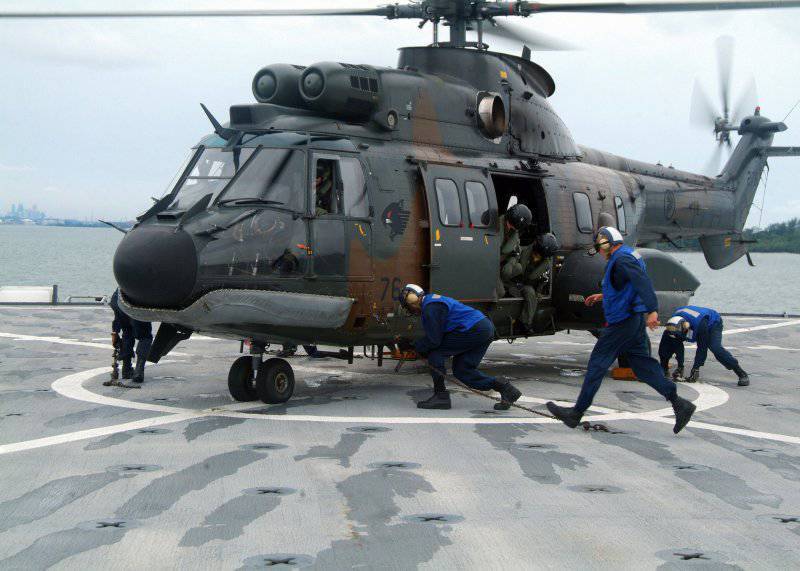 The helicopter is equipped with a thermal imaging system for viewing the front hemisphere, weather radar or search radar, inflatable ballonets, a winch compatible with night-vision goggles with cockpit instrumentation, fuel tanks of increased capacity.

The Navy is the only light aircraft carrier "Illastries" type "Invinsible". 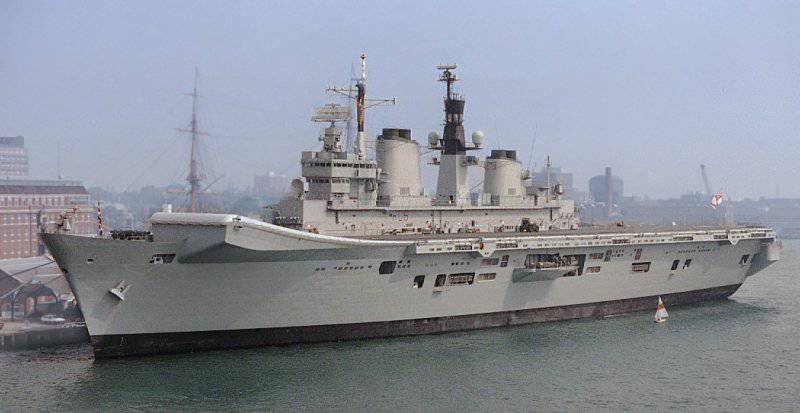 Aviation group: up to 22 aircraft and helicopters. Until recently, the main striking force was the HS Harrier, a carrier-based vertical take-off and landing bomber. Created on the basis of the land-based "Harrier" aircraft. 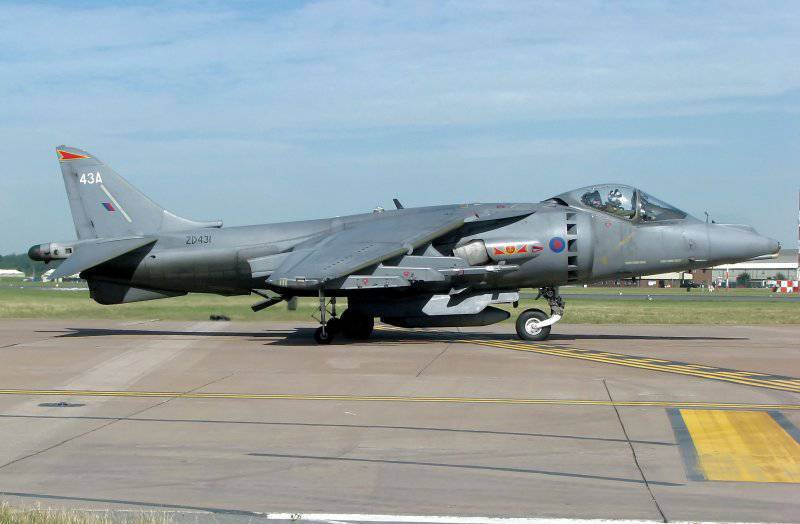 The most modern version of the "Harrier" II-- - the second generation of attack aircraft
vertical take-off and landing "Harrier". The British version is based on
American aircraft AV-8B, which, in turn, was developed based on
British "Harrier" of the first generation. The British version of Harrier II differs from the American AV-8B by the presence of an additional pylon for placing missiles under each wing of the wing and using original avionics. 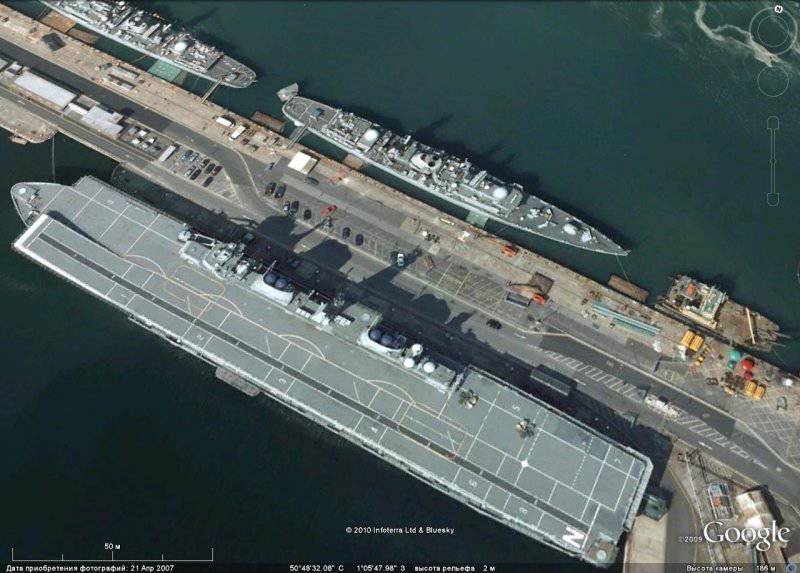 Helicopters can be used for independent anti-submarine and anti-ship operations, with waves of 6 points, as well as for search and rescue operations, for reconnaissance and electronic countermeasures. The maximum anti-submarine patrol time is 5h. In addition to special equipment and weapons, the naval version is characterized by an increased length and volume of the cargo compartment, folding main rotor blades and tail boom. 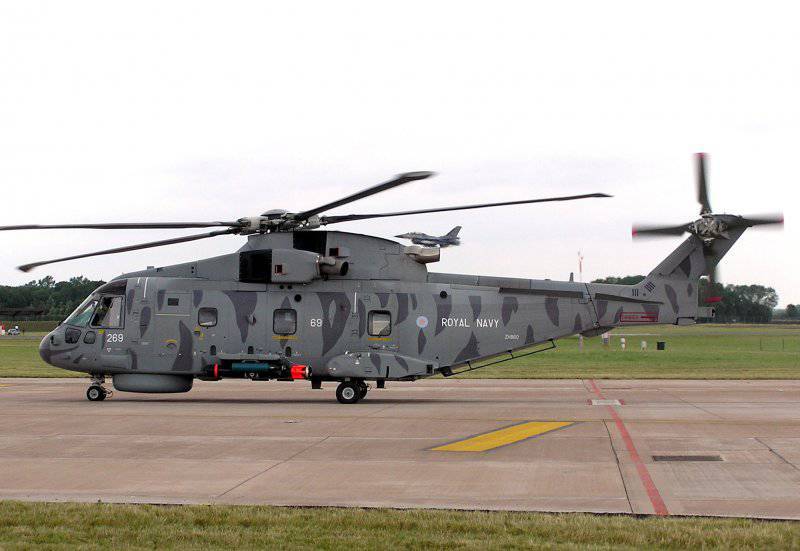 A transport parade capable of carrying up to 30 paratroopers with weapons or weight up to 3. The presence of this version of the helicopter rear cargo hatch with a ramp and the size of the cargo compartment (6.50х2.50х1.83м) allow it to carry light army all-terrain vehicles and artillery guns;

Multipurpose ship helicopter Lynx HAS.8 is in service with the aviation of the British Navy and is designed to fight both submarines and surface ships of the enemy. 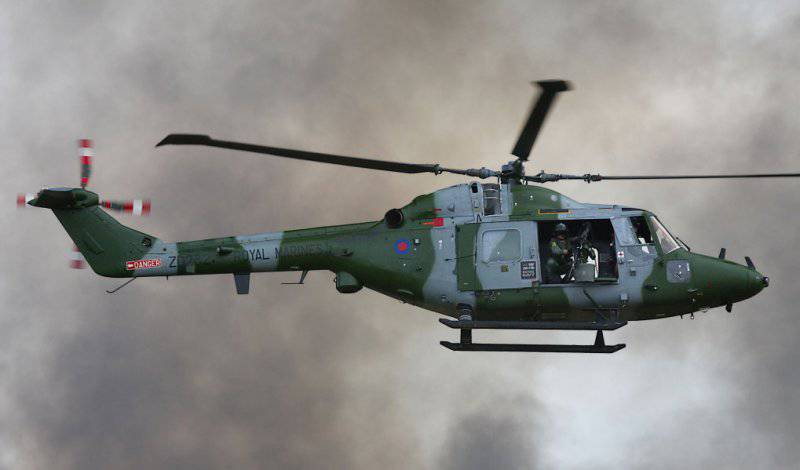 In the anti-ship version of the Lynx HAS.8 with four anti-ship missiles "Si Skyug" or "Penguin" McNUMX mod.2 can be in the air 7 h 3 min and have a range of up to 35 miles To combat submarines, it is possible to equip the Super Links with a lowered AN / AQS-160 type of gas or Cormoran, a magnetometer (AN / ASQ-18 or AN / ASQ 81). With one torpedo and OGAS, the search for submarines can be carried out for 504 h 2 minutes at a distance of 25 miles from the ship. In the shock version (two torpedoes) the range reaches 20 miles.

When conducting search and rescue operations, the maximum distance from the base is 340 miles, under normal conditions with additional fuel tanks - from 150 to 260 miles. The Lynx HAS.8 (“Super Lynx”) helicopter can also solve the tasks of conducting reconnaissance, including radio engineering, and supplying ships at sea.

The Navy has 2 aircraft carriers, armed with an AV-8В "Harrier" VTOL, and helicopters EH101 "Merlin" British-Italian helicopters.
The flagship of the Naval Forces of the Republic of Italy aircraft carrier "Cavour" (pennant C550) is one of the newest ships of this class in the world. 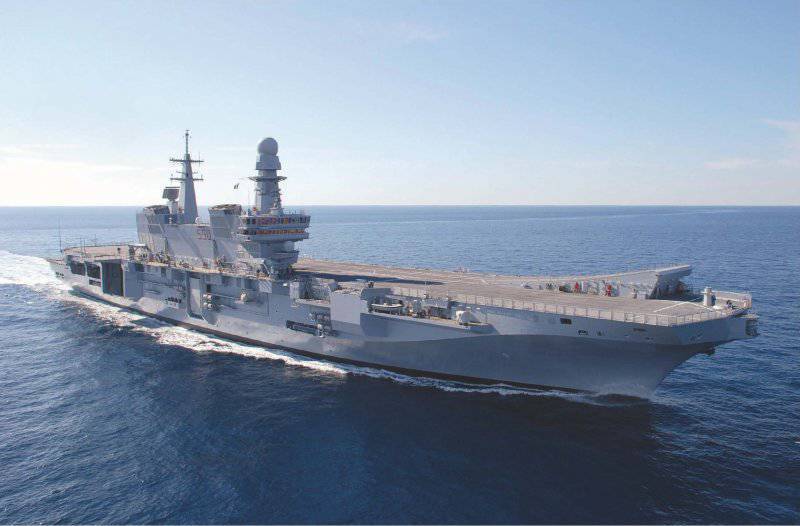 It was laid down July 17, 2001, launched on July 20, 2004, transferred the fleet 27 March 2007 city
Full operational readiness of the ship was reached 10 June 2009.
The creation of this rather large (full displacement up to 30,000 tons, twice the size of another Italian aircraft carrier - "Giuseppe Garibaldi") and a powerful ship marked the taking of course for the qualitative expansion of the capabilities of the Italian fleet and its claim to the status of a global maritime power. Holds 8 fighter "Harrier" and 12 helicopters. 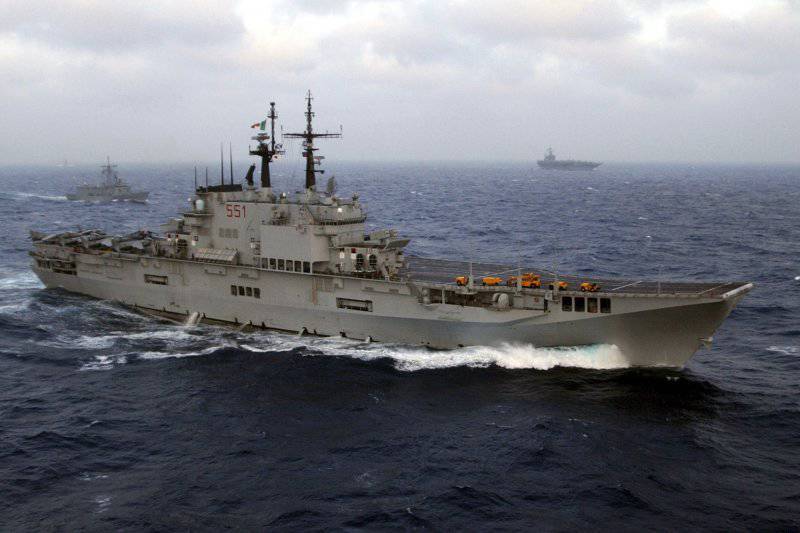 It is the smallest aircraft carrier in the world, having a full displacement of 13.850 tons.
It is intended to combat submarines and surface ships at the head of the search and strike group, to perform the functions of the flagship of the Italian Navy, to gain local air superiority and to provide direct air support to ground forces in amphibious operations of limited scale. It was decided to convert it into a helicopter carrier. 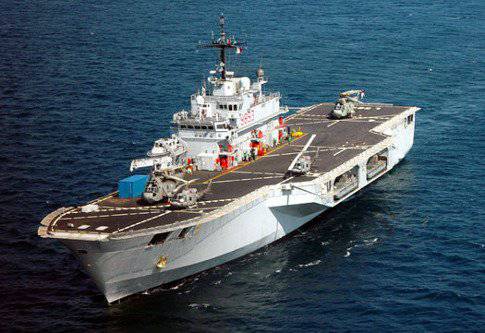 Tactical design assignments provided for their dual purpose: in wartime and in crisis situations - the transfer of the sea and landing on the unequipped coast of the landing forces, weapons and military equipment, and in peace - assisting the population in emergency situations caused by earthquakes, floods, fires, etc. The landing of assault marine units can be carried out with the help of two heavy transport assault helicopters SN47. In addition to transport assault helicopters, an air group of five multi-purpose helicopters can be based on the ship. AB-212 (licensed version of Bell 212). 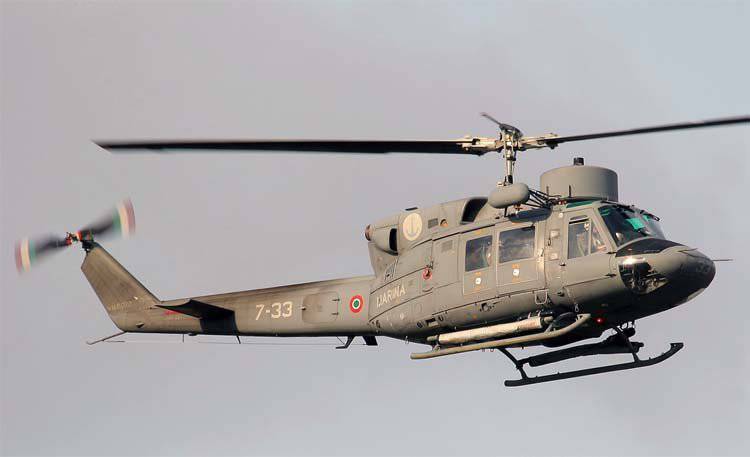 These helicopters, depending on the weapons and equipment installed, can perform the functions of a transport-assault (X-NUMX-10 soldiers), anti-submarine and combat helicopters. The designers also worked on the ability of the X-NUMX-12 fighter aircraft to perform vertical or shortened take-off and landing of the AV-3B Harrier.

Aircraft carrier "Prince of Asturias" - joined the Spanish Navy in 1988 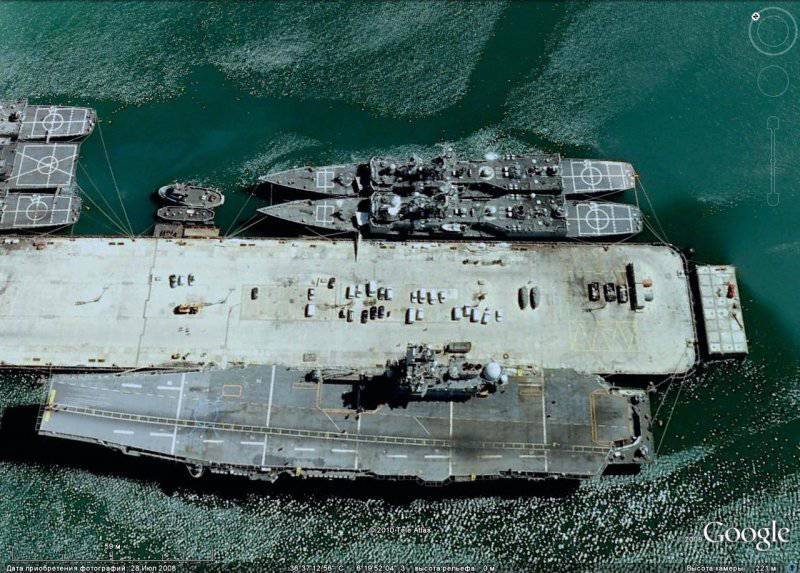 This ship, to a greater degree than aircraft carriers of the Invincible and J. Garibaldi types, is adapted for the basing of vertical take-off and landing aircraft. This ship was the first to use the original architecture of the hull with a significant rise of the flight deck in the forward part of the entire width instead of the ramp installed by the English in the nose of the flight deck on the Invinsible aircraft carrier. This deck lifting (5 ... 6 °) should provide take-off and vertical take-off aircraft. Aircraft carrier displacement - 16 200 t, hull length by KVL - 196 m, flight deck length - 175 m., With a width of 27 m. The main armament of the ship consists of 20 aircraft. 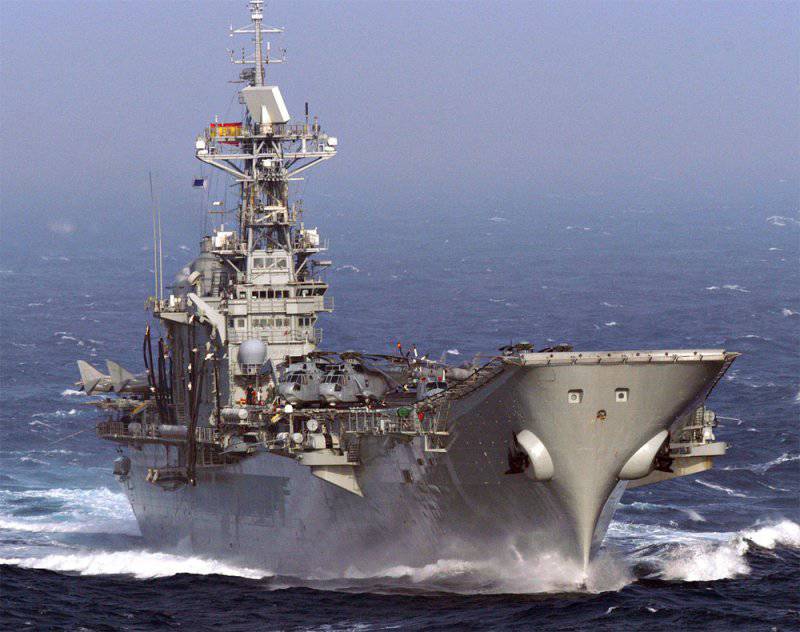 In this case, the composition of the air group may vary depending on the problem being solved. As a rule, it includes six to eight Matador vertical take-off and landing aircraft (the Spanish designation of the English carrier-based Sea Harrier), six to eight anti-submarine helicopters "Sea King" and four to eight AB 212 type helicopters. 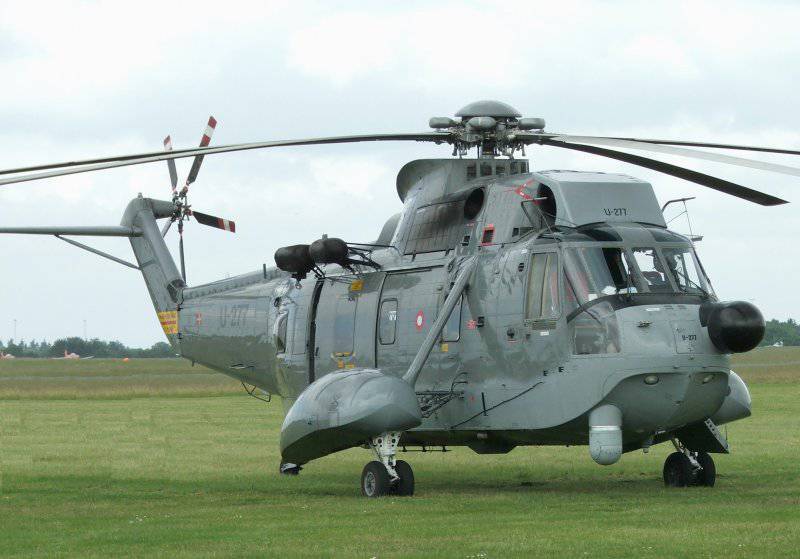 Spanish landing ship "Juan Carlos I"in its concept is close to the class of US amphibious assault ships of the Wasp type. This ship is named after Juan Carlos I, the current king of Spain. 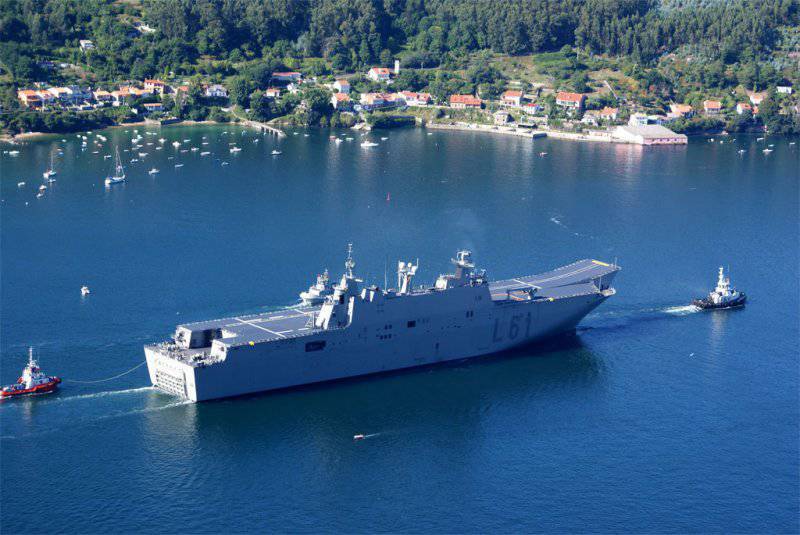 The ship was laid in 2005 year. The 2008 is launched. In 2011, he joined the Navy. The new ship will play an important role in the Spanish Navy. The ship has a flight deck of length 202 m with springboard. On the deck, there are 8 landing sites for Harrier airplanes, F-35 or medium helicopters, 4 landing points for heavy CH-47 Chinook helicopters and 1 point for the convertible plane V-22 Osprey. The air group includes up to 30 aircraft and helicopters.

Ctrl Enter
Noticed a mistake Highlight text and press. Ctrl + Enter
We are
Deck aircraft in World War II: from Taranto to Midway. Part II"Charles de Gaulle". Ship is a disaster
54 comments
Information
Dear reader, to leave comments on the publication, you must to register.