April 23 2013
97
In the near future, the US Armed Forces will receive a new super-weapon for armament. A number of experts have already seen this in Washington’s desire to consolidate the superpower status of the country at the next round of scientific and technological progress. This time, a solid-state laser, which, according to media reports, is capable of burning targets “like a blowtorch”, acts as a super-weapon. Already in 2014, the current laser installation will have to appear on one of the American warships in the Persian Gulf.


It will happen on 2 a year earlier than previously planned. The reason for all the high intensity of R & D in this direction. It is reported that the combat laser will be able to successfully fight with combat boats and UAVs of the enemy. At the same time, so far he lacks the power to deal with supersonic aircraft and rockets on the final part of the trajectory, but this is only a matter of time.

An experimental laser installation is planned to be installed on an Austin-style Pons landing transport dock, the American newspaper The Wall Street Journal reports. This ship is part of the 5th fleet The U.S. Navy, whose current area of ​​responsibility is the Persian Gulf and the western Indian Ocean. The laser gun, estimated at $ 32 million, will be used to defeat Iranian UAVs and light boats. According to the military, this weapon can be used quite effectively in climatic conditions in the Persian Gulf. 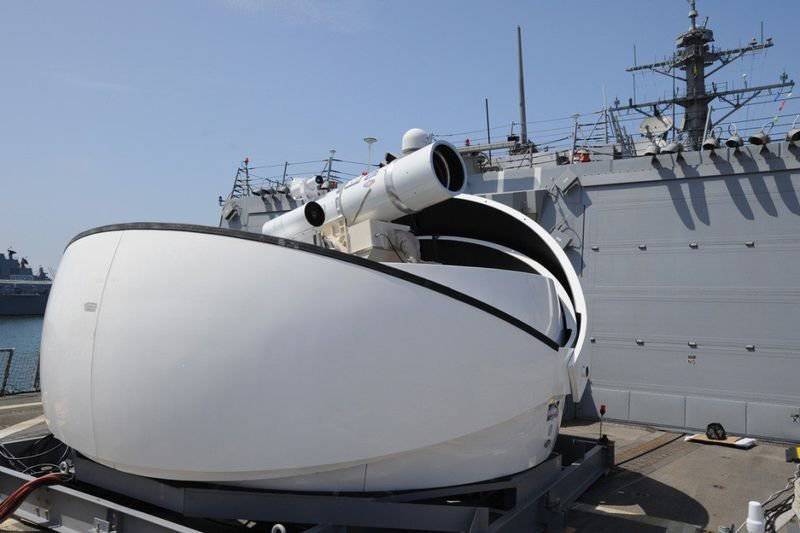 It is reported that the laser weapons will be mounted on board the transporter early next year. Previously, this laser gun was on the destroyer "Dewey" type "Arly Burk." In August and September, the 2012 laser cannon took part in tests, during which a new weapon could hit the 3 UAV. Later, a laser gun was used to hit target boats. In total, the new super-weapon was able to hit 12 targets from 12.

Work on the creation of a laser gun (which received the designation LaWS) for the needs of the US Navy, starting from 2007 year. This setup uses a solid-state laser. This laser can not hit targets at long distances, but is suitable for the destruction of small aircraft at medium and short distances. In addition, LaWS can be used to dazzle optical surveillance systems for ships and unmanned aerial vehicles. Currently, the LaWS laser gun is being set up and prepared for the upcoming long service in the sea.

It is reported that the cost of one such laser installation today is 32 million dollars, but in the long run, with the start of mass production, its value should fall. At the same time, each shot of a laser gun costs only 1 dollar (and maybe even less), while launching a short-range interceptor missile costs the taxpayers 1,5 million dollars. The US Navy is confident that the use of such weapons will allow them to save huge sums of money spent on ammunition (the laser gun has unlimited ammunition). The cost of the shot is cheap, and for its work nothing is needed except powerful sources of electricity.

Also, the US Navy published a video in which the LaWS laser cannon shoots a UAV quite easily as part of firing tests. The record shows how an unmanned aerial vehicle flashes and in just a couple of seconds turns into a burning torch, flying apart. In this case, with the new laser, not everything is as smooth as we would like. The Center for Congressional Research notes the fact that the problems of using laser weapons are still not completely resolved. In particular, these installations are very dependent on weather conditions, and the usual smoke screen will help protect against their impact. 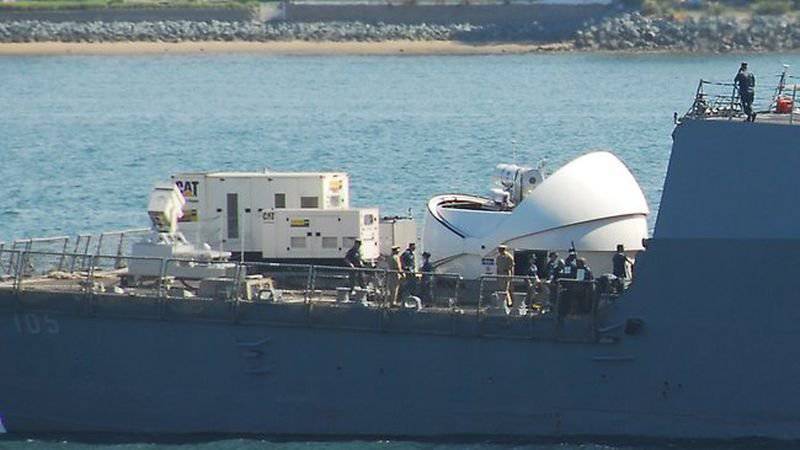 Ordinary precipitation and phenomena such as fog, rain, sandstorms reduce the effectiveness of combat lasers. At the same time, the Americans, understanding this, tried to create an adaptive optical system. Its prototype served as a system that was used in telescopes. As a main element, it uses a mirror, which is able to change its curvature indicators to 670 once a second. So there is a possibility that the US military will be able to increase the effectiveness of shooting in bad weather conditions to an acceptable level.

However, there are at the laser gun and such disadvantages that can not be corrected in any way. A laser gun can fire only at visible targets. In the event that the object is located beyond the horizon line or is hidden by other objects, it remains inaccessible to the new super-weapon. If we talk about flying targets, for example, UAVs, then a reflecting surface can be fairly easily protected from a laser. Despite this, laser systems are a promising and formidable weapon, on which the United States has high hopes.

Currently, the US needs to retain the status of a superpower; for this, the country needs to get ahead of its geopolitical competitors in the military-technical sphere. The United States needs a breakthrough and the opportunity to break away, as it once happened, even if only for a couple of years, with nuclear weapons. Nowadays, nuclear weapons are no longer perceived as something unattainable. Of course, not all countries have it, but it is no longer necessary to talk about its exclusivity. Moreover, not only the Americans, but also other members of the UN Security Council, who once decided to limit the possible competition by the Treaty on the Non-Proliferation of Nuclear Weapons, are losing the monopoly on nuclear weapons. The non-proliferation regime of these weapons erodes over time, despite the efforts made by members of the “nuclear club”. For this reason, those of the major players who are still claiming world domination, began to experience understandable anxiety.

It is important to note the fact that there are simply no superpowers without a super-weapon. The military force, which would differ by an order of magnitude from the military forces of other countries, is one of the 4's most important elements that fix the country's exclusivity in the international arena. The three other elements of superpower today are the highest economic potential, ideological and political authority in the world, global expansionist aspirations. All of them are present in the United States in varying degrees. It is only a new frightening baton, the possession of which greatly facilitates the advancement of their interests and is much more effective than all the tricks of diplomacy. 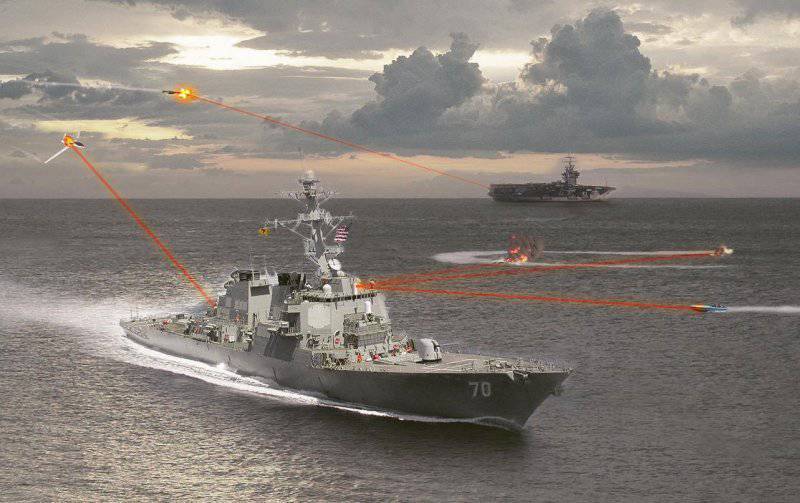 It is not for nothing that it is said that a kind word and a pistol can achieve much more than just a kind word. In the modern world, the one who is stronger is still right. So it was throughout stories humanity, the most striking example of the past is the Roman Empire I – II centuries of our era. In those years, the empire rose above the rest of the world in almost all the main indicators that characterize the national power of the country. At the same time, the Roman Empire had a superpower mission - to civilize the nations surrounding the empire in its own image and likeness.

The only missing element of the US superpower now is the country's lack of super-weapons, the very fact of which could put Washington’s potential competitors in the position of a multi-million Aztec empire against the 500 of Corteses armed with an Arquebus. The musket was 100 times more deadly than a spear, the machine gun is many times more effective than a silicon gun, and an armadillo equipped with a steam engine will surpass any galley with at least a hundred, even with a thousand rowers at the oars. At the same time, the effect of a technical and civilizational gap in such collisions begins to work with amazing efficiency. Hence, the US’s striving as soon as possible and as far as possible to move forward in the race of military technologies and the practical use of new weapons, says military expert and columnist Viktor Litovkin.

According to the expert, nuclear weapons will soon come to an end, but new types of weapons are coming up: radiation weapons, laser weapons, radiological weapons, and EW systems that are able to disable the enemy’s navigation, reconnaissance and target designation systems. And without the use of these systems, it is simply impossible to imagine modern combat. At present, the matter is not even in hardware and armored vehicles, but in the fact that all this “hardware” cannot move, because its engines will be disconnected. Because they have jammed shutters of guns, optical devices "will cease to see", but airplanes will not take off, and so on. For developments in this direction, many see the development of military science.

However, not everyone agrees with the presence of superpowers and their role in the modern world. So well-known Russian politician Yevgeny Primakov predicts the end of the era of superpowers. In his opinion, the very notion of “superpower” is now only a category of cold war times. In those years, the superpowers united around themselves a conglomerate of states, ensuring their security in the conditions of a fairly tough confrontation of opposing blocs. It was precisely the security of other countries that allowed the superpowers to play that role, dominating the decision-making that all other allies of the alliance obeyed. These days the picture has changed. The absence of a global confrontation on the planet eliminated the need to cover up a “nuclear umbrella”, which the USSR and the USA “opened up” over their partners and allies. 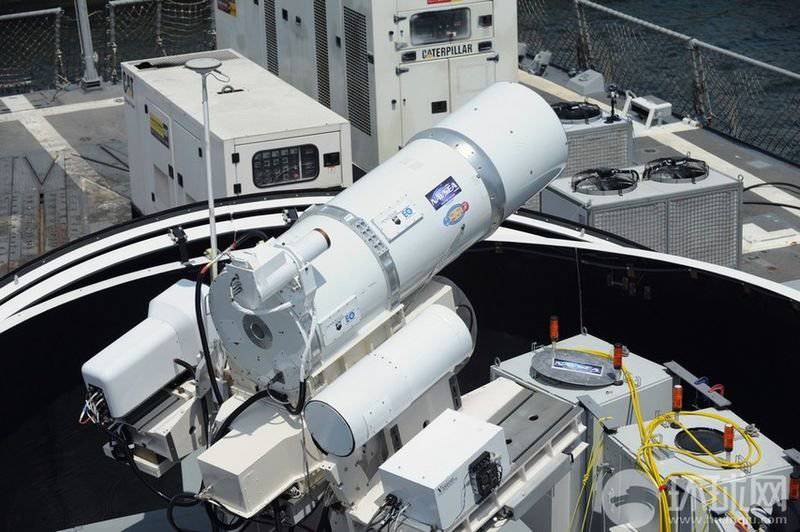 According to Yevgeny Primakov, another indication of the end of the era of superpowers is the fact that after the end of the cold war, the world began to develop towards a multipolar structure. This conclusion today can be illustrated by a number of existing examples. One such example is the European Union (EU). Which today has turned into one of the centers of power, which is comparable in its capabilities with the United States. Moreover, who will undertake today to assert that the PRC, which pumps up economic muscles, will want to be part of the system of a unipolar world and will meekly lagging behind the events that are determined from one world center? The same applies to Russia, Japan, India.

However, if we continue the discussion in terms of “superpower”, then we can agree with the fact that any real superpower should have its own super-weapon in the arsenal. In this case, the weapon must not always be symmetrical. The strength of countries may be different, for someone it may consist in combat lasers, and for someone else in the presence of energy resources. For example, the Russian Federation is the main supplier of hydrocarbons on the world market, which means that if desired, our countries can become an energy superpower, since no modern combat laser can compensate for the heat deficit on our planet during the winter season.