The history of the emergence of BMPT

April 23 2013
44
Work on the BMPT or Object 199 “Frame”, which was widely known in the media as “Terminator” and even appears on its official website as “Uralvagonzavod” under its unofficial name, began in the second half of the 1990s. Moreover, the first attempts to create such a machine were made even earlier in the 80s of the last century. Currently, the fate of the support combat vehicle tanks is in limbo. On the one hand, the Terminator BMPT was officially adopted by the Russian army, but deliveries of this type of weapon to the troops are not made. Currently, the only operator of this machine is Kazakhstan, which has acquired 10 BMPT units.


In September, at the traditional exhibition of weapons in Nizhny Tagil, “Uralvagonzavod”, which has already become traditional, is preparing to present to the general public a new version of its BMPT, which was created based on the upgraded version of the T-2013 MBT. According to Oleg Sienko, Director General of the Uralvagonzavod Research and Production Corporation, the company is working on a new concept for its combat vehicle. According to Oleg Sienko, the new machine in its capabilities and characteristics will be close to the already created BMPT. Its main difference will be a reduction in the number of crew. Currently, the 72 Facility crew consists of 199 people.

History The development of BMPT began a quarter of a century ago. Then in the distant 1980-s already under the cipher BMPT understood "heavy infantry fighting vehicle" or as they said just a heavy BMP. At that time, the experience of existing military conflicts showed that the traditional use of tanks and infantry fighting vehicles became increasingly problematic due to the saturation of the defense with various anti-tank complexes, including various anti-tank missiles. For all their might, tanks in combat proved vulnerable against modern anti-tank weapons. That is why the question of creating a combat vehicle that would effectively fight tank-dangerous manpower, destroying and suppressing it, supporting tanks in battle, arose sharply. Work on this project in those years was conducted in the armored academy. 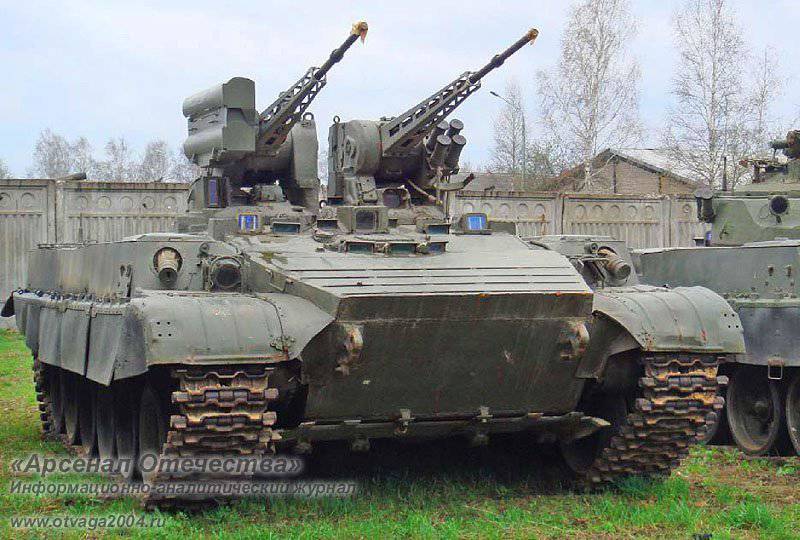 781 object
In the USSR, new models of military equipment and weapons were created by government orders or decrees, as well as by decrees of the military-industrial complex (commission on military-industrial issues). The work began as specific proposals were received from the ordering departments of the Ministry of Defense and the ministries of development. The same happened with BMPT when this combat vehicle was included in the "5-year plan for the most important research and development work on weapons and military equipment for 1986-1990 years". This plan was binding on all government organizations and was funded. The initiator of the R & D on the development of a fundamentally new machine, as well as the concept of its combat use was made by the department of tanks VA BTV, headed by Major General O. N. Brilev.

The design bureau of the Chelyabinsk Tractor Plant of the Ministry of Agriculture and Machine-Building (GSKB-2), headed by V. L. Vershinsky, was appointed the lead contractor for the development of the BMPT, and the well-known Tula Design Bureau of Instrument Engineering (KBP) was chosen as the developer of the weapons complex for the BMPT. Shipunov. GSKB-2 began to create a combat vehicle of a new class in 1985, when research was still conducted to determine the appearance of a combat vehicle.

The BMPT was to operate as part of tank units and destroy enemy tank-dangerous weapons. The experience of fighting the Soviet army in Afghanistan confirmed the need for this kind of equipment. The experience of the war demonstrated that the lightly armored BMP-1 and BMP-2 cannot fully fight the enemy’s tank-dangerous manpower, and modern MBTs do not have a sufficient angle for lifting the weapon, which is necessary in mountain combat conditions. The main requirement for the new armored vehicle was a powerful weapon with a high angle of elevation, as well as a good level of protection for the hull, which would not be inferior to the MBT. In addition, the machine had to be very well protected from anti-tank melee weapons.

Based on this, it was decided to manufacture a combat vehicle on the basis of the production tank T-72, which was produced at Uralvagonzavod. The crew was also identified - 7 people, as well as their locations. A mechanic-driver was to be located in the center in front, the 2 grenade launcher was on board. In the middle of the car, which housed the combat compartment of the tank, were the gunner and the commander. And on the sides of the hull were 2 machine gunner, who covered BMPT from the flanks. 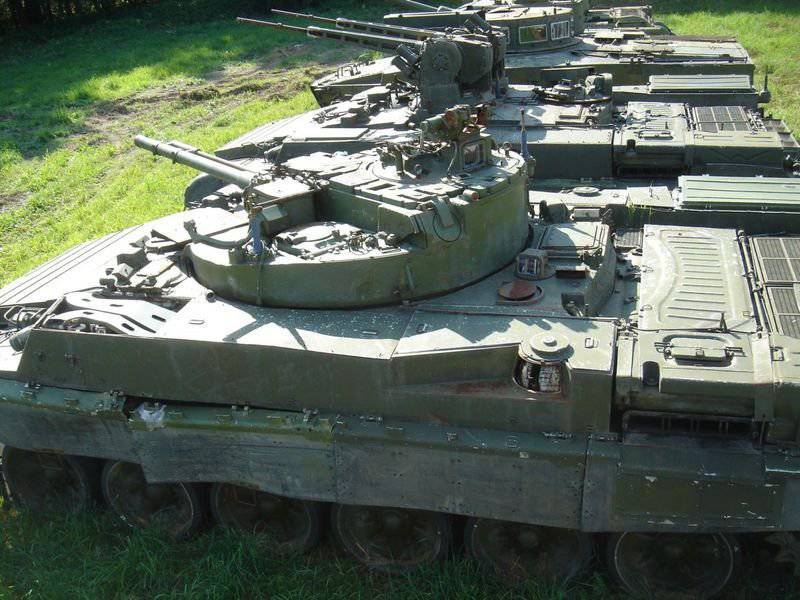 782 object
This arrangement of the crew required changes in the hull of the MBT and its bow nodes. The shelves located above the chassis were made in the form of armored sealed compartments, in which coursework, remote-controlled grenade launchers with an ammunition feeding system were installed. At the same time, on-board machine gunners were able to control PKT machine guns, which were carried out, remotely.

At BMPT, modern aiming and surveillance devices were mounted for each crew member controlling the armament. Thus, 6 crew members of the BMPT could conduct independent fire and destroy a potential enemy in all directions. The main armament of BMPT at the initial stage was performed in 2-s variants (A and B). In the test report, they were sometimes referred to as experimental 781 samples of the 7 and 8 assemblies. At the same time, in the press today they are often referred to as “781 Object” and “782 Object”.

Both versions were made on a modified T-72A tank chassis with a redesign of the hull nose assembly. Above the running gear there were shelves made in the form of sealed armored compartments, in which were located remotely controlled stabilized 40-mm grenade launchers. Behind them were the protected fuel tanks, as well as a number of auxiliary systems, such as batteries and a filtering unit. This solution allowed to increase the security of BMPT from boards.

The first version of “A” was armed with two 30-2 72-speed guns and 7,62-mm machine guns with independent aiming turrets paired with them. Additional weapons of the machine consisted of anti-tank missile system and 2-x large-caliber 12,7-mm machine guns NSVT. The crew of the “781 Object” consisted of a 7 person. The second version of the "B" used a complex of weapons from the BMP-3, which consisted of 100-mm and 30-mm guns in a single unit and an 7,62-mm PKT machine gun paired with them. However, due to the restructuring and cessation of the CTZ on tank-related projects, the projects of these development machines did not receive. 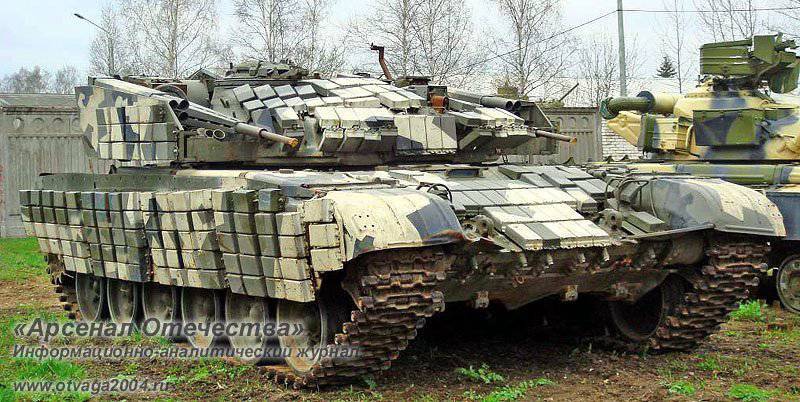 787 object
Theoretically, the crew member of the BMPT 4 (2 machine gunner and 2 grenade launcher) could, if necessary, leave the combat vehicle and conduct an independent battle outside of it, dismounting from the BMP assault forces, while their safe exit from the BMPT was not envisaged. In the future, when the number of crew members of the BMPT decreased to 5 people, the idea of ​​dismounting a part of the crew disappeared by itself.

In 1995, fighting in the North Caucasus began in Russia, and ChTZ was transformed into Ural-Trak JSC, the management of the new enterprise returned to the idea of ​​creating BMPT. The work on the project was started at the enterprise’s own funds at the initiative of the plant’s general director. In GSKB-2, which at that time was headed by A. V. Yermolin, urgently began work on creating a combat vehicle based on the mass T-72 tank, which could operate effectively in mountainous and wooded areas and urban conditions.

In 1996, the combat vehicle, designated Object 787, was ready. The experimental sample looked rather unusual. The gun was dismantled from the T-72 tank, and two 2-mm automatic cannons 30A2, paired with 72-mm machine guns, were installed on the sides of the turret. These installations, like the forked tongue of a viper, could mortally sting any enemy, so the company called the car "Viper". Both guns were mounted on a single shaft that passed through the turret of the tank. Fire control and aiming of guns at the target was carried out by the gunner and the vehicle commander. In addition, unguided cassettes were mounted on the sides of the turret in addition to the guns on the new BMPT. aviation missiles (NAR), 6 guides from each side. All this was covered with special armor shields.

Particular attention was paid to the designers to protect the BMPT from anti-tank cumulative infantry vehicles, the entire corps and the tower were covered with blocks of DZ "Kontakt-1". In addition, a special container was mounted to the stern of the tower, which also served as an additional armor protection. A number of experts believe that it could be equipped with additional weapons, for example, large-caliber machine guns. This machine was tested from 5 to 10 on April 1997, with the participation of 38 employees from the NIIM of the Ministry of Defense of the Russian Federation. The machine was tested shooting on the move in the daytime. In July, 1997, the trials were continued by firing NARs. Test shooting showed high efficiency BMPT, but personnel changes at the factory put an end to this machine. 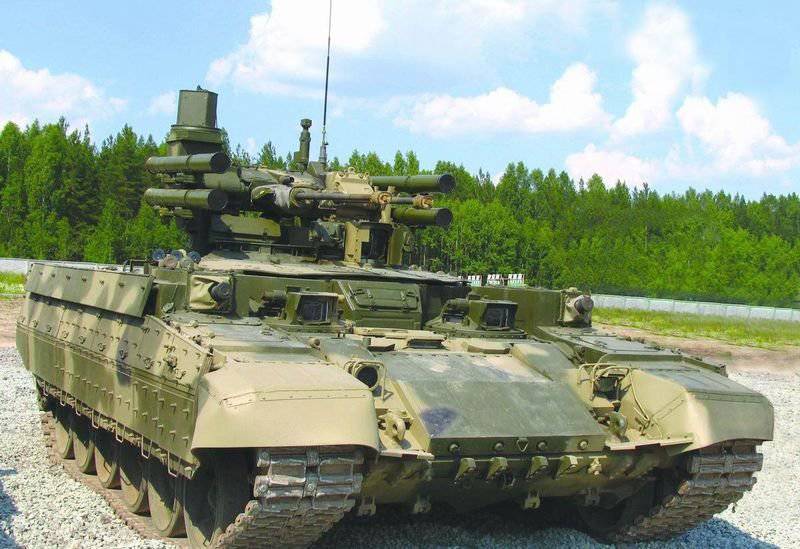 1999 Terminator Object
Only the 4 version of the BMPT, developed in the Ural KB of transport engineering, was adopted by the Russian army. Initially, the T-72 tank chassis was used on UKBTM, and the T-90A was used in the future. The running layout of the BMPT "Frame-99" (199 Object) was first demonstrated to the general public in the summer of 2000, during the Nizhny Tagil arms and military equipment exhibition. By that time, the BMPT was already deciphered, like a tank support combat vehicle.

Her crew consisted of 5 people, four of whom could participate in fire control. The machine was equipped with a low-profile turret of the original design with external armament, which was mounted in a single stabilized cradle - an automatic 30-mm 2А42 gun and an automatic 30-mm AG-30 grenade launcher paired with it, and its own independent stabilized 4 grenade launcher drives (located on the left side of the tower in an armored container). This arrangement of weapons allowed to fire immediately from all the weapons on board. At the same time, the 7,62-mm PKTM machine gun with remote control was also installed on the commander's hatch. Additional armament machines were 2 automatic grenade launchers in the fenders. At the same time, a modern FCS “Frame” was installed on the BMPT, which made it possible to conduct combat effectively both day and night.

In 2002, the armament exhibition showed not a mock-up, but a model of a combat vehicle refined according to customer’s remarks. At the same time, the armament complex has undergone a change, now 2-e 30-mm automatic cannons, as well as 7,62-mm PKTM machine gun were mounted on the turret. According to the characteristics of the protection of the boards, the new BMPT even surpassed the T-90 MBT. This was achieved thanks to the installation of DZ along the entire side projection and shielding of the boards with auxiliary equipment. Also on the BMPT to protect the stern of the hull was a lattice anti-cumulative screen. This version of BMPT at the end of 2006 of the year successfully passed state tests and was recommended for adoption.

Ctrl Enter
Noticed a mistake Highlight text and press. Ctrl + Enter
We are
Modernization of MBT with the aim of increasing their combat effectiveness in urban environmentsTerminator Reboot
44 comments
Information
Dear reader, to leave comments on the publication, you must to register.