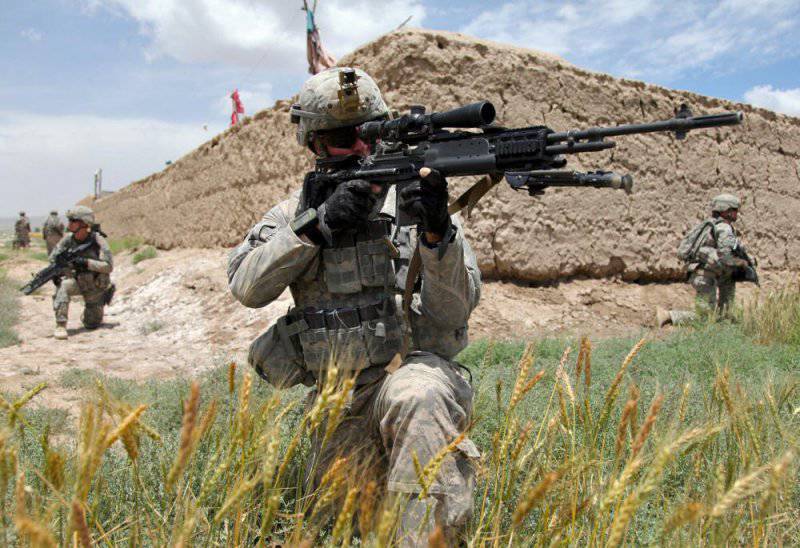 Interesting news slipped from the US Air Force sappers, who finally realized that the 5,56 caliber sniper rifle millimeters for the destruction of unexploded projectiles is clearly not enough and they need something more long-range and powerful. Oddly enough to replace not the best arms for the sapper's tasks, not a large-caliber sniper rifle was chosen, although such a weapon would not be superfluous, but a rifle with a 7,62 caliber of a millimeter M14, or rather, its version of EBR (Enhanced Battle Rifle). I think it would not be superfluous to run over all the M14 to at least know in general terms what kind of weapon it is.

It all began in 50-60-ies, when, on the basis of the M14 rifle, it was decided to create a more accurate weapon, that is, a sniper rifle. We will not touch stories The appearance of the M14 itself, despite the fact that it is quite interesting, is today a bit about other weapons, although the wide distribution of these weapons outside the United States, when the army of the “three-letter” country refused a rather bulky weapon in favor of a more compact sample and distributed these weapons everyone in need Not for free, of course, not the Soviet Union after all. In fact, the M14 had a strong influence on the further development of firearms in many countries, and it would be quite problematic to list all the samples in which these weapons were taken as a basis. For this reason we confine ourselves, even if it is sufficiently extensive, but by no means a complete list of the most well-known M14 sniper rifles.

The first of them can be safely called М14 DMR, which appeared as a result of the Designated Marksman Rifle program. From the name of the weapon immediately become clear the tasks that were set in front of this sniper rifle. Thus, it was required that the weapon could be guaranteed to hit a fixed target standing to its full height, at a distance of 600 meters, while the effective fire was planned to be conducted at a distance of 1000 meters. All this was realized by the patron of the NATO standard 7,62х51. In general, the weapon turned out to be fairly simple and reliable, it was tested in combat in Afghanistan, and although the rifle looks not as modern as the latest fashion models of weapons, the M14 DMR is not inferior in its characteristics to most good self-loading sniper rifles chambered for 7,62х51 .

The rifle received a barrel with five cuts of sufficiently high quality, the length of the barrel of the weapon is 559 millimeters. In addition, the device was specially developed silent shooting for a rifle, as well as a muzzle brake-recoil compensator. The butt of the weapon and the bed are made of fiberglass, the bipods can not only fold, but are also removed during transportation. The butt is adjustable in length by a set of plates that are smoothed under the butt pad, but the emphasis for the cheek is more thought out and its adjustment is carried out with two screws with relatively large heads. It feeds weapons from detachable box magazine with a capacity of 10 cartridges. The weight of the weapon without ammunition and telescopic sight is 5 kilogram. The total length of the rifle is equal to 1112 millimeters, but here it is necessary to take into account the length of the muzzle brake-compensator recoil and adjustable butt length.

Much more modern version of the weapon is a sniper rifle M14 SOPMOD developed by TROY, and although the cover of the book does not judge, in this case, the weapon has something to boast. First of all, it should be noted that the designers of the company have set themselves (or they have been set) an almost impossible task. So it was required to create a sniper rifle chambered for 7,62x51, which would be similar in size and weight to the weapon chambered for 5,56x45, but it also had the characteristics of larger models of weapons. With such a task, I would not even think about turning to the bull-pap layout, even despite its individual negative qualities, since if they require compactness, then eat a little hair, but there will be some nuances. The designers of the company TROY found another solution, namely, they completely reworked the weapon in order to reduce the dimensions of each part, within reasonable limits naturally. 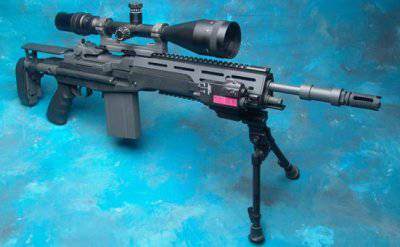 In general, there was nothing much to cut there, but some of the results were achieved. So a weapon with a barrel of maximum length (457 millimeters) began to have a length of 889 millimeters with a weight of 3,75 kilograms. It seems to be not impressive, but the result is definitely there. In addition, 305, 356 and 406 millimeters can be mounted on a weapon, which will further reduce the weight and dimensions of the weapon, but will naturally affect its characteristics. In general, the designers managed to at least partially accomplish the assigned task, retaining the classic layout of the weapon.

In the best traditions of modern times, the rifle received a bunch of picatinny-type slats, which should help increase the weight of the weapon with the help of many additional devices. It is worth noting positively that the butt is adjustable in its length, though in steps and with a sufficiently large pitch, and also has an adjustment for the height of the cheek support. An interesting detail is a nadulny device with a flame arrester, the main function of which, apparently, afterburning powder charge with a small barrel length, as it is installed only on the shortest versions of the barrels, although the small volume of this cylinder is somewhat embarrassing.

Much better with the task of reducing the length of the weapon while maintaining the normal length of the barrel handled in another company, namely in Springfield Armory. Honestly, I personally believe in the achievements of the company with a very large amount of work, or rather, it is impossible to believe at all. The fact is that the numbers say the following: the length of the barrel is 730 millimeters, the length of the rifle 946 millimeters. Looking at the image of the weapon, the location of the store and the overall proportions of the rifle such results could be achieved only if the bolt, moving back, not only removed the cartridge case, but also took out a new cartridge from the magazine, dragging it back to pick it up . Just like it happened in a gun Webley mars, but it’s hard for me to believe in such interesting decisions in modern weapons, because very few designers are ready to spend their working time at least to create not a weapon, but a masterpiece and everyone dances around the worked out schemes, finally stopping any development. The fastest sizes are indicated without the butt length, then, more or less, they become plausible, in general, we leave these figures on the manufacturer’s conscience.

Well, finally came to the weapon that was the reason for writing this article. Although with a slight delay, it should be noted that the name M14 EBR is not entirely correct for this rifle, its full name is Mark 14 Mod 0 Enhanced Battle Rifle or M1A EBR, but to emphasize its relationship to the M14, very often it is not entirely correct .

This weapon is a rather beautiful pile of light alloys, plastic and steel. As for me, the rifle looks too festive in any of its performance, it can be nothing for exhibitions, but I personally adhere to minimalism in weapons, reasonable, of course. On the other hand, the forearm bristled with fastening straps on all sides, butt was removed from the previous model, that is, adjustable in length in steps and with adjustable cheek rest. In general, the beauty and the ability to install anything and everything on the weapon is good, but a lot of changes were made inside the rifle. Virtually everything inside the weapon was recalculated, and although the principle of operation remained the same, not a single detail remained from the original M14. The supply of ammunition, gas reducer, bolt carrier, and so on, all have undergone modernization. The result of all this, I think, will greatly shake those who believe that the basic parameters of the weapon depend only on the cartridge and the barrel. The increase in the speed of a bullet from 855 meters per second to 975 is not bad at all, in my opinion, but in principle nothing has changed. Initially it was planned to produce weapons with 16 and 18 barrel lengths inches, but stopped at a longer version of the barrel, but the butt guides were slightly shortened, so that a very long-armed weapon would be inconvenient.

This weapon attracted the special forces of the United States Air Force, as well as "Seal", though in small quantities, and now sappers.

Ctrl Enter
Noticed a mistake Highlight text and press. Ctrl + Enter
We are
Dragunov sniper rifleWhat should be a modern sniper (part of 1)
28 comments
Information
Dear reader, to leave comments on the publication, you must to register.