April 18 2013
21
At the recent international exhibitions of military equipment IDEX-2013 and LIMA-2013, China presented its new project, designed specifically for export deliveries. Chinese shipbuilders showed the general public a new non-nuclear submarine of the S20 project. So far, no country has shown a desire to acquire such a submarine, but in the near future it is possible to begin negotiations with the subsequent signing of a contract. Thus, China in the very near future can replenish the list of countries that make non-nuclear submarines for sale for export.


According to open data, the S20 project is a reduced submarine of the previous 041 project (Yuan class according to NATO classification). About the existence of the project 041 became known about nine years ago. In the first months of 2004, United States intelligence officers published satellite photographs of the Wuhan Shipyard shipyard located in Wuhan. At one of the open sites of the enterprise there was some previously unnoticed submarine. Soon, more detailed information appeared, such as the name of the project or approximate characteristics. According to American analysts, the Navy of the People’s Liberation Army of China (PLA) needs about fifteen such submarines. 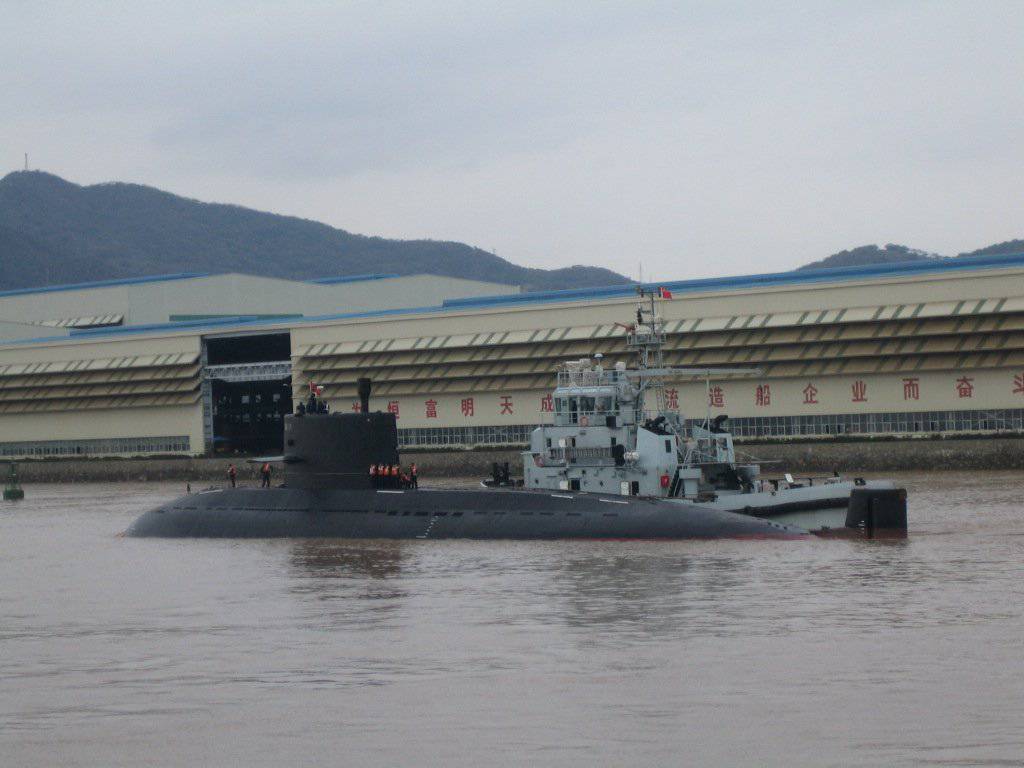 Subsequently, the situation with the Yuan submarines developed like a game of hide and seek. Just a few months after the discovery of the head boat of the project, new information ceased to arrive. The submarine was launched, after which for a couple of years nothing was known about the fate of the 041 project. Such a loss of the head boat is easy to explain: satellite intelligence cannot guarantee to find submarines in the ocean. Therefore, the search for the Yuan head-launched submarine, which had been tested, became the task of anti-submarine defense. The satellites, in turn, continued to monitor the situation at the shipyards.

In the autumn of 2007, two new submarines were spotted at the shipyard in Wuhan, which in a few months also came to the test. At the end of 2010, the plant had three unfinished submarines at once, one of which soon went to sea. Since then, from time to time there are new information about the construction or repair of new submarines. For example, last year the submarine 041, which is under construction or undergoing renovation, was spotted at the Changxingdao plant in Shanghai. The details of her stay there have not yet been made public.

In total, in nine years, China built no more than eight diesel-electric submarines of the 041 project. The first of them joined the Navy no earlier than 2006 of the year, and by now four or five boats have entered the service. An interesting feature of the 041 project is the fact that, by a large number of characteristics, it corresponds to the Soviet / Russian project 877EKM “Paltus”. Thus, the version according to which the new Chinese diesel-electric submarines are in fact significantly processed copies of Russia has the right to life. This assumption is also supported by the presence in the PLA Navy of several “Halibuses” set back in the mid-nineties, i.e. shortly before the start of the development of the project 041. 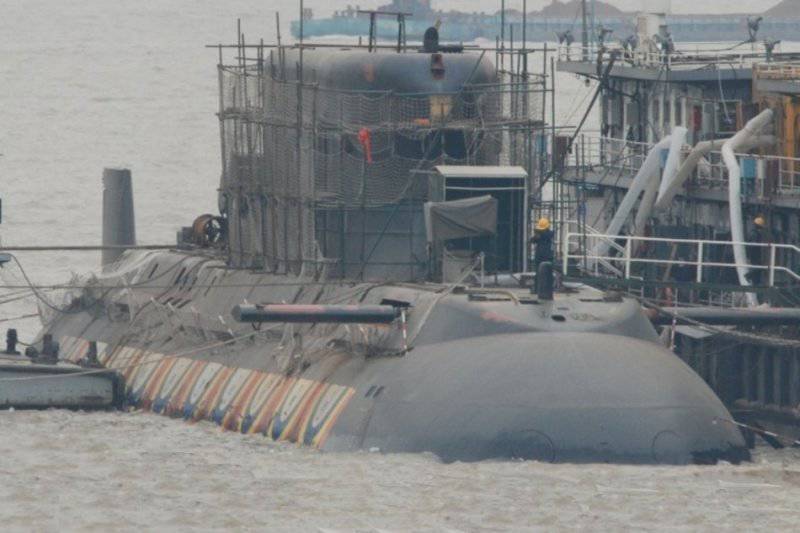 Possible Russian "roots" of Chinese submarines attract attention and seriously complicate the situation. If the development of submarines "041" really used the Soviet and Russian technologies, then this may be the reason for the international scandal. All the diesel-electric submarines of the 877ECM project for China were built in Russia and the contract did not provide any additional conditions for the transfer of technology. Now, it seems, China is going to use Russian developments for the construction of submarines not only for themselves, but also for third countries.

Since the S20 submarines are already being offered for export, and their layouts have been demonstrated at international exhibitions, some characteristics of promising ships are known. S20 is a two-part submarine 66 meters long. The maximum width of the boat is about eight meters, the draft is 8,2. The declared displacement of new submarines in the surface position does not exceed 1850 tons, in the submarine - 2300. The strength of the body is enough to dive to the maximum depth in 300 meters. The maximum travel speed does not exceed 17-18 knots, which is slightly higher than the cruising speed in 16 knots. When driving on economical modes, the submarine is able to travel up to eight thousand nautical miles. There is enough fuel and food for the 60-day hike. The crew of the S20 submarines consists of a 38 man.

As well as the submarines under construction of the 041 project, the S20 will be equipped with six torpedo tubes of a millimeter 533 caliber. Probably, export boats will also have the opportunity to attack enemy targets with anti-ship missiles YJ-8X, designed to launch through a torpedo tube. In this case, the project S20 in its combat capabilities can come close to the Russian project 877 / 636, the German 212 and Dolphin, etc.

Of particular interest is the power plant project S20. According to reports, these submarines are planned to be equipped with a diesel-electric power plant with full electric propulsion. In this case, the operation of submarines will be imposed some restrictions. Therefore, Chinese shipbuilders are already claiming that in the future S20 will receive a new air-independent power plant (VNEU). At the same time, its specific type has not yet been named. So it could be a fuel cell system, a closed-type steam turbine power plant, or even a Stirling engine, like on the Swedish submarines of the Gotland project. It is worth noting that the creation of an air-independent power plant for non-nuclear submarines - for all its prospects - is a very difficult task. Not all leading countries of the world have such technologies. Therefore, China, having created its own VNEU, is able to take a leading position in the field of non-nuclear submarines. 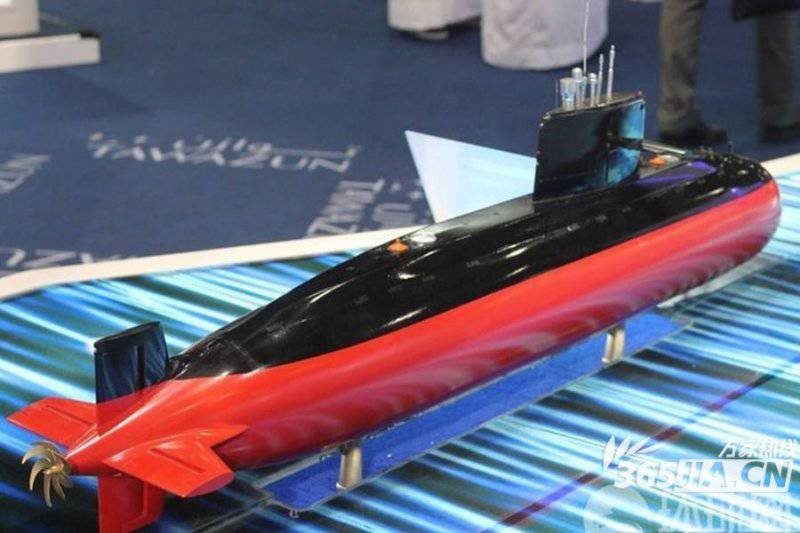 With certain reservations, it is already possible to recognize the S20 project as a competitor of the Russian Amur-1650. Both promising submarines have similar characteristics and common features of the appearance. In this case, there are noticeable differences, for example, different displacement. Nevertheless, both new submarines claim the same tactical niche, which in the future will entail competition in the international market. Russian submarines probably have an advantage over the Chinese, because potential customers learned about them much earlier than about the Chinese. To date, several countries are already considering the purchase of Amur-1650 submarines. Chinese shipbuilders, in turn, have so far to advertise their products and attract the attention of potential buyers. In addition, the advantage of Russian submarines can be considered a different composition of weapons and already developed air-independent power plant. Thus, even when China creates several new systems, the final customer choice between Amur-1650 and S20 will not be obvious. This gives a certain hope, but does not allow to relax. For successful competition with foreign developments, not only Chinese ones, it is necessary to continue the development of domestic non-nuclear submarines intended for export delivery.

Ctrl Enter
Noticed a mistake Highlight text and press. Ctrl + Enter
We are
About dolphins and barracudas: the demand for multi-purpose submarines is growing in the world. Part of 2Non-nuclear submarines of the projects "Type 212" and "Type 214"
21 comment
Information
Dear reader, to leave comments on the publication, you must to register.