April 19 2013
12
Which American tanks was the worst of World War II? If we limit ourselves only to those tanks that were mass-produced and used in battles, then most likely one can call the light tank T-16. It is unlikely that most readers will be able to confidently even recognize the T-16. His service in the US Army was so short and even shameful that he is usually barely mentioned in most official US tank development stories during World War II. 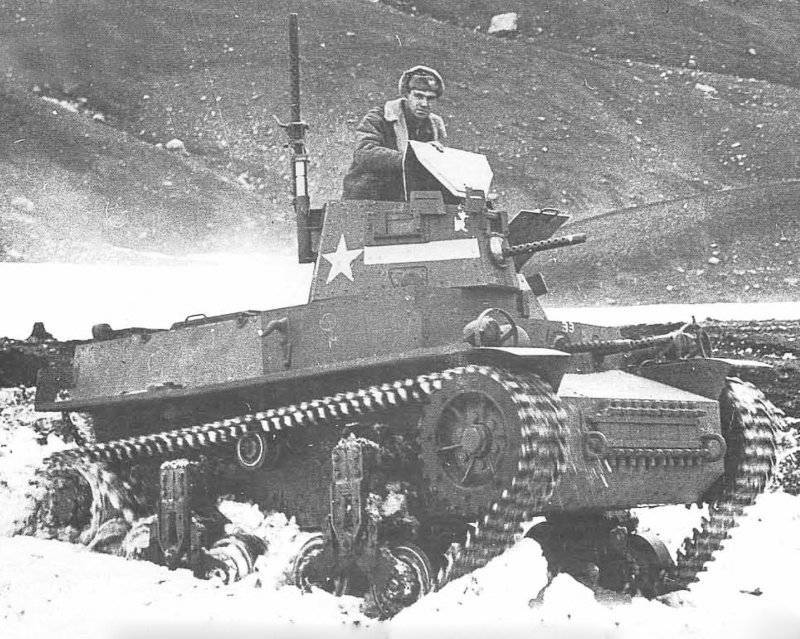 DISTINCT from almost all other tanks of the US Army of that time, the T-16 light tank was developed by Marmon Herrington, not based on the requirements of the US Army. It was created in private and was intended for commercial export. Marmon Herrington was best known at the time for its commercial trucks and began designing light tanks for export, including CTVL, originally for Mexico, in the 1930. A little later, one CTL-3 was acquired by the US Marine Corps for testing st. It was not a tank in the full sense of the word and reminded rather tankette increased. Improved model CTL-3M was also built for the US Marine Corps and helped form the basis for the later T-16.

In 1940, the Army of the Royal Dutch West Indies (KNIL: Koninklijk Nederlaris Indisch Leger) began a program of extensive modernization of its weapons. KNIL belonged to the Dutch armed forces designed to protect the oil wealth of the Dutch West Indies (which is now part of Indonesia). KNIL was separated from the army of Holland and most often ordered weapons on its own. When war in the Pacific became inevitable, KNIL decided to reorganize its four mechanized brigades and later increase their number to six. These new combat units required a significant number of new vehicles, including trucks, tractors and tanks. Holland was not able to release such a quantity of equipment on its own, especially since with the war that already surrounded Europe there was no way to deliver it from there. The only source of such a supply could only be the United States, but their tank factories were also busy rushing to equip the American army and the first lend-lease supply agreements. So KNIL was forced to turn to those firms that were not bound by contracts for the supply of military equipment of the US Army. Marmont-Harrington was ideal for this, as it could provide the entire range of vehicles and necessary equipment on a commercial basis. 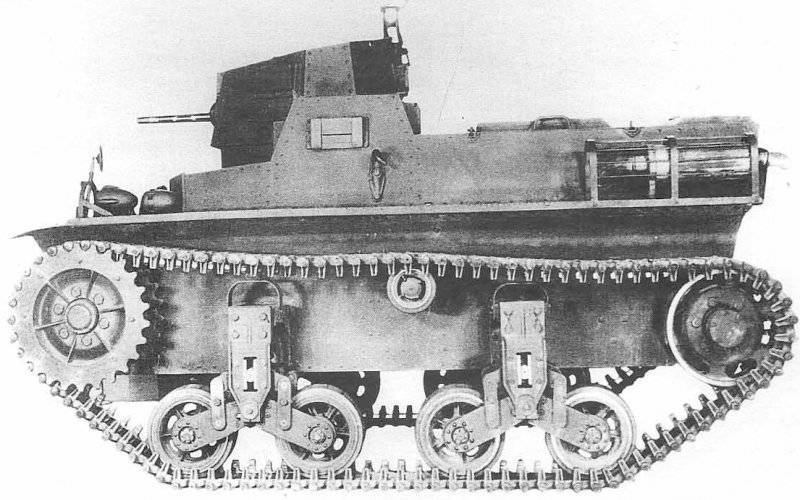 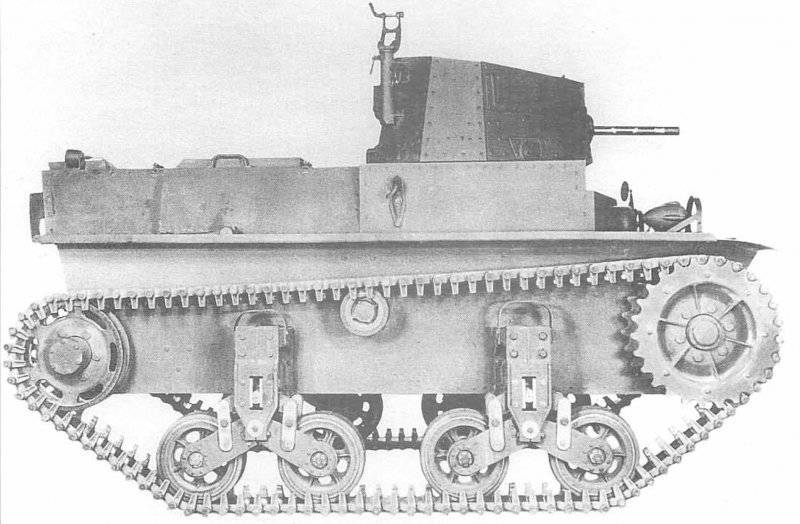 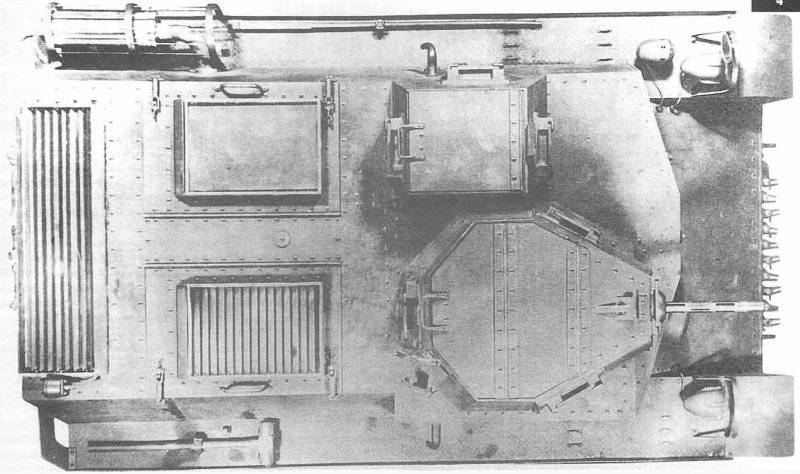 In 1940, KNIL ordered 600 tanks, including lightweight double CTLS-4TAC, CTLS-4TAY, three-seat CTMS-ITBI, and average four-seater MTLS-IGM. It was decided to form in each brigade two tank battalions with the total number of 90 tanks. By Asian standards, it was a huge military supplies, the beginning of which was in May 1941. Of these four types, CTLS-4 should have been supplied first. As mentioned earlier, these machines were a development of the CTL-3. the biggest difference from which was the presence of a machine gun tower. For reasons not completely understood, the CTLS-4 was built in two versions, which were like mirror images of each other. CTLS-4TAC had a driver's seat on the left, and CTLS-4TAY - on the right. In all likelihood, this was due to being able to offer the tank to different countries with a driver on the same side as it was located on civilian vehicles. Since many countries in the Pacific region adopted the British left-hand rule, CTLS-4TAY could be supplied to them, while other countries could choose CTLS-4TAC.

As a result of the contact of the designers with the US Army Supply Office, for the CTLS-4, the suspension was recommended on vertical twisted springs, a smaller copy of the one that went for the new MZ light tank. But the CTLS-4 was much smaller and therefore was armed with only one Browning machine gun of the .30 caliber (7,62-mm) in the turret and two more in the hull. The design and production of the CTLS-4 was delayed and instead of being ready for May 1941, the first tanks did not arrive in the Dutch West Indies before the start of the war with Japan. 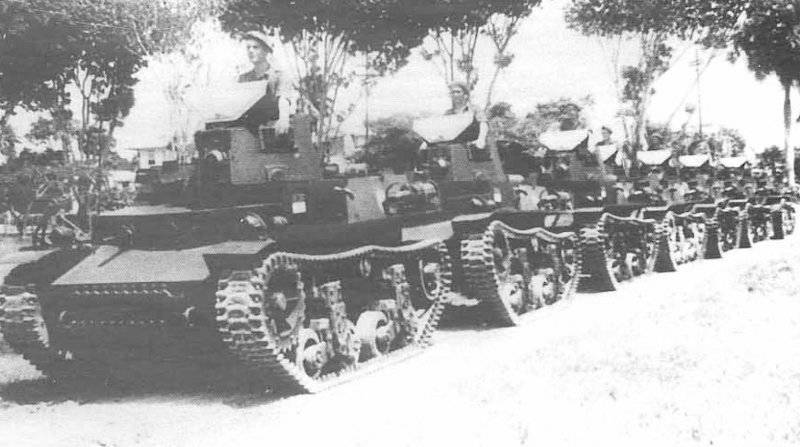 Column of light tanks Marmon - Harringto and the Dutch marines on the island of Suriname.

The Japanese launched an invasion of the oil-rich lands of the West Indies in January 1942. In mid-February, the first light CTLS-1942 tanks from Marmon-Harrington were delivered to Yana Island, with a total number of slightly more than 4 units. The tanks arrived without ammunition for machine guns, which were later obtained from the air force using machine guns of the .20 caliber instead of 30 mm used in the European army. New tanks had a lot of flaws. For example, the ignition socket was located on the firewall behind the driver, and when he operated the control levers, he often hit this button, disabling the engine. By February 7,92, the first seven trained crews were reduced to an improvised tank platoon commanded by Lieutenant Christian. This happened just a day before the attack of the Japanese forces on the island of Java, which had already seized many other lands of the West Indies. Christian's platoon made a march through the mountains north of Bandoeng and attacked the unfolding Japanese forces near Soebang 27 in March 2. Despite the initial success, the tanks, being isolated from the Dutch infantry, lost 1942 tanks from 5 and were eventually withdrawn. The forces of KNIL on the island of Java surrendered a few days later - 7 March 8. The Japanese occupied the island and found several serviceable light CTLS-1942 tanks and about a dozen of them were eventually brought to operational status. In 4, some of them were handed over to the nationalist Indonesian Independent Army and were used in battles against the British armed forces who landed on the island of Java to establish allied control. 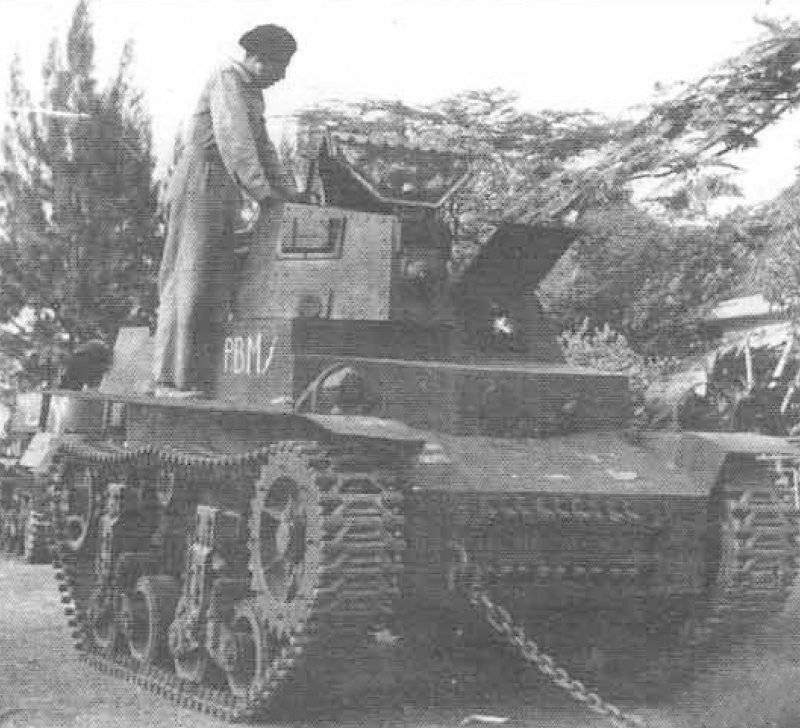 A rare shot of the tank Mapmn-Harrington CTLS-4TAC in combat. 1945.

After the collapse of KNIL and the Dutch West Indies in March 1942, Japan’s next target was expected to be New Guinea and Australia. In early March, the United States Department of Defense, rejected the Dutch demands and engaged in the strengthening of Australia. The 102 CTLS-4 arrived in Australia in April and another 47 in May 1942, making up a total of 149 tanks. They were used primarily for training. They were gradually written off to the reserve, as more modern tanks began to flow and the CTLS-4 engines began to be used to equip boats.

By the summer of 1942, the additional Marmon-Harrington tanks had left the factory gates. Since all of them officially belonged to the Dutch government in exile, some of them came to support military units of foreign colonies, including those operated by Germany and Japan. Total Dutch West Indies were supplied by 89 tanks, including Suriname, Guiana (73) and Dutch Antilles, isolated sections of Aruba (7) and Curacao (9). Among them were 39 light CTLS-4, 30 CTMS-ITBI and 19 medium MTLS-1G14. In Suriname, a battalion of tanks was formed in Paramaribo under the command of Lieutenant Royal Dutch Marines Arenda. Some entered the later deployed US Air Force in Zanderia. They were operated until 14 February 1945, when their states were revised. In time, the Dutch West Indies were liberated and involved in the fight against Indonesian separatists. In 1946, 17 CTLS-4 light tanks were delivered to the island of Java. They were in need of repair and were used very limitedly, even after an attempt to restore them in 1947.

Following Holland, the US Army was the next candidate for the remaining Marmon-Harrington tanks. But by that time in the USA there was already a more advanced MZ light tank. The 240 CTLS-4 tanks were offered to China and this program was tentatively approved. However, in the middle of 1942, a Chinese communications officer, General Pe Kiang, told the US government that China does not lack tanks. The reasons for this are not completely clear. In any case, the US government now had more than 250 CTLS-4 light tanks. In June, 1942 T. The US Army decided to take most of them for limited security service. 23 July 1942. The Directorate of Arms adopted them for limited use and designated the CTLS-4TAY as a light tank T-14, and the CTLS-4TAC as a light tank T-16. 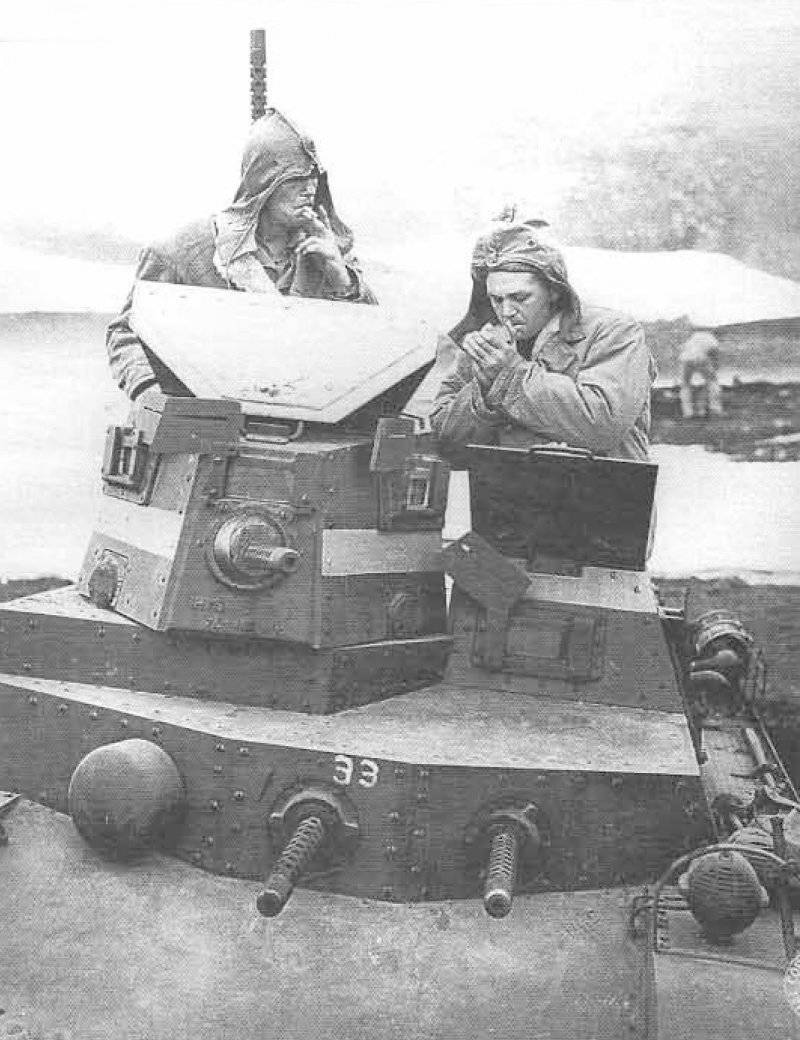 Captain Joseph Fletch and Sergeant Sweeney of the reserve tank company of the 138 Infantry Regiment near Fort Glenn, Umnak, Alaska, 1942.

The vast majority of them arrived in Alaska, as well as the Aleuts, to meet a possible Japanese invasion here. Some remained in California as part of a self-defense force to protect the coast from invasion. Shipments included Alaska - 145, Northwest Sector - 25, Northwest Sector / California - 19, Southern Sector / California - 25, Bermuda - 5,1, Salt St. Mary - 17. The Japanese occupied the island of Pisca and Atta in the Aleutian Ridge in June 1942.

As a result, several tank companies were formed from light tanks T-14 and T-16 and were sent to US bases in the Aleutian Islands. The 138 Infantry Regiment on Umnak was supported by such a company. The Japanese landed here with a handful of Ha-Go type 95 light tanks, and this was the only combat use of enemy tanks on American soil. As you know, no American tanks, including the “Marmon-Harrington”, were used at the time when the United States again conquered the islands of Kiska and Atta due to the disgusting soil on the coast. Perhaps the most famous among these units was the 602-I separate tank company on Umnak Island, which supported the 135-th Infantry Regiment of Missouri National Defense. This unit was often photographed and most of the T-16's photographs in the US Army belong to this unit. The company was formed from company B, the 35 of the tank company of the Missouri National Guard, and it was assumed that it would join the 194 battalion of light tanks, which entered the battle in the Philippines in 1941-42. However, the company remained in the state, possibly because at that time it simply did not have enough tanks for it. 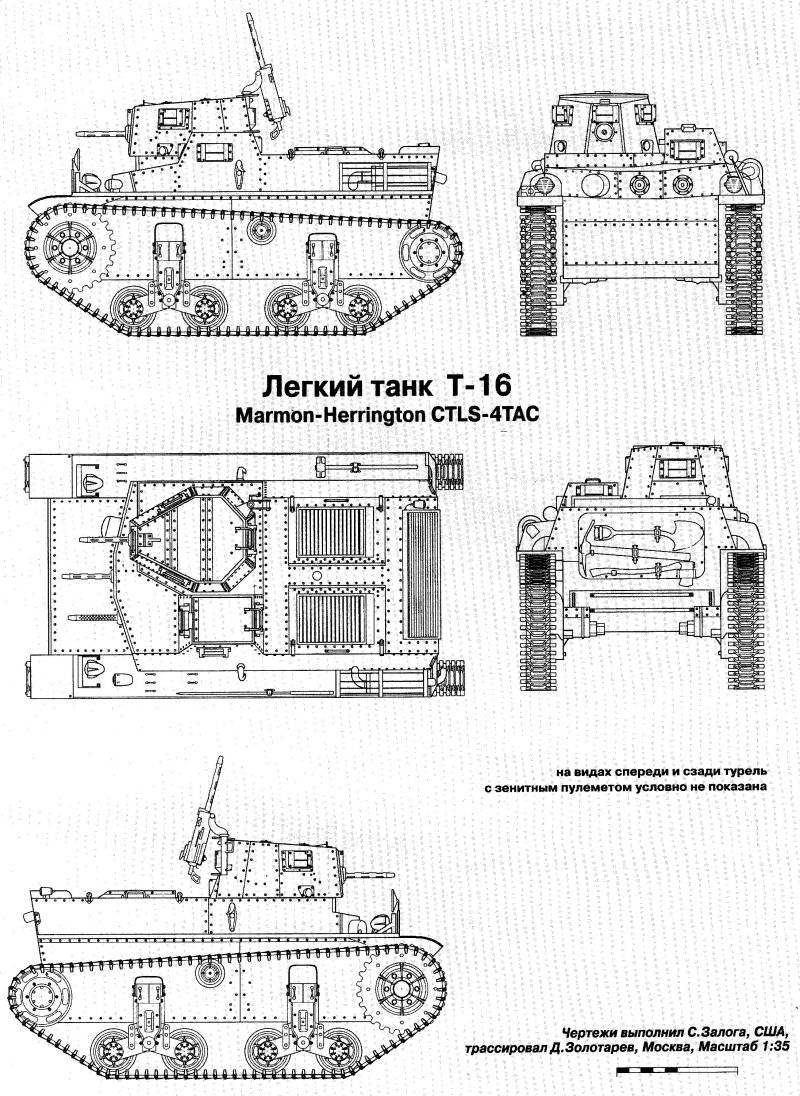 American crews did not like Marmon-Harrington tanks. The Supply Management Report in November 1942 stresses that every single tank suffered an accident in operation during the first 100 hours of operation. Some of these problems were removed by training, since many of these machines were operated not by trained tank crews, but by any available personnel. At the same time, the Dutch and the Australians found these tanks quite satisfactory, since the Dutch had operated them for almost three years in the Jungles of Suriname. 20 November 1942. The supply management ordered all T-14 and T-16 light tanks to be decommissioned and decommissioned. The largest number of tanks of this type were written off in 1943.
The Supply Department sent one light tank CTMS-1TB1 and two medium MTLS-1G14 to the Aberdeen test site for testing as early as February-May 1943. In one of the remaining reports, they are referred to as "completely unreliable with mechanical and structural defects, low-powered and equipped with weak weapons." Although these tanks were rated as unsuitable for service in the US Army, they found some sales not only in the Dutch West Indies. So thirty CTMS-1TBI light tanks were offered to individual South American countries under the Lend-Lease program. These are Cuba (8), Ecuador (12), Guatemala (6) and Mexico (4). Ecuador after the write-off of Marmon-Harrinponov received in 1944 light tanks М3А1. Some of the Guatemalan tanks survived 1990 and three of them were sold to an American collector. But as far as we know, none of the most general form of CTLS-4 has been preserved entirely, although it is quite possible that there are their remains in the uninhabited corners of Suriname or the Aleutian Islands.

Author:
Stephen Zaloga, author's version of the article of the same name in the magazine "Military Ordnance"

Ctrl Enter
Noticed a mistake Highlight text and press. Ctrl + Enter
We are
American light tanks. Between the wars, between the lines ...South African armored cars Marmon-Herrington Mk.I - Mk.-IV
12 comments
Information
Dear reader, to leave comments on the publication, you must to register.