April 11 2013
42
The Russian authorities are going to postpone the program for the disposal of chemical weapons for 5 years. This program started in Russia at the end of the 90 of the last century. In total, about 5,5 thousand tons of chemical munitions remain in Russia, the last ton of which, according to new plans, will have to undergo a detoxification procedure in the 2020 year. The reason for the breakdown of the deadlines for the completion of the liquidation of chemical weapons, which were defined by the agreement to the “Convention on the Prohibition of Chemical Weapons”, is the late opening of the last specialized enterprise for the disposal of toxic substances. However, Russia will not experience serious sanctions or political complications due to the postponement, but the risk to the population and the environment will remain until the last ton of chemical weapons is destroyed.


The ability of poisonous substances to cause the death of animals and people has been known since very ancient times. In the XIX century, poisonous substances began to be used during large-scale military operations. But the real birth of chemical weapons occurred during the First World War. Started in 1914, the world war quickly enough acquired a positional character. This did not suit the generals, forcing them to look for new types of offensive weapons. The German army began to use massive attacks on enemy positions using poisonous and suffocating substances. 22 April 1915 of the year near the Belgian town of Ypres, the Germans conducted a gas attack using chlorine. This attack went into history, as demonstrated the effectiveness of the massive use of toxic gas, which has become a means of warfare.

The duration of the chemical warfare agents is determined by their persistence, that is, the ability for a long time to infect the area and the objects and people on it. Infected terrain and equipment are dangerous both because of the likelihood of contact damage, as well as due to inhalation of chemical warfare vapor. Therefore, there was a need to develop protection not only at the time of application, but also for a long time (hours or even days). In turn, the long-term use of personal protective equipment led to the fact that the physical load on the body increased, and this led to the exhaustion of personnel, a decrease in the degree of their fighting capacity (by 20 – 30%) and a disruption of control of divisions (disorganization). 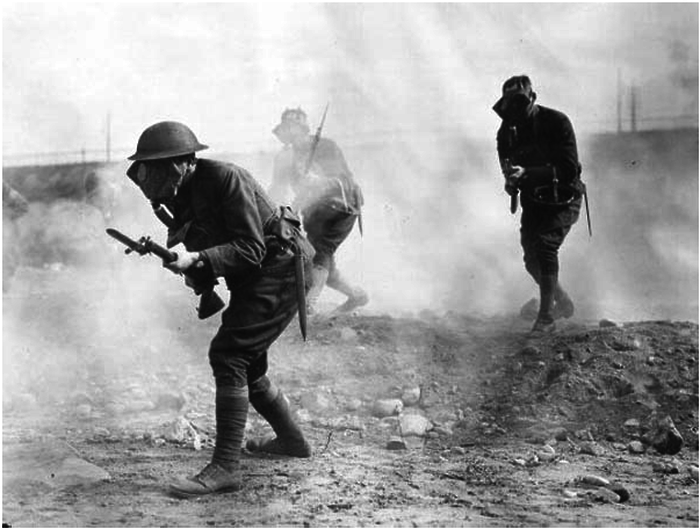 Considering all this, in the first half of the 20th century, more and more new chemical agents were actively created in the world. Currently, toxic substances are divided into several types: skin-blistering, nerve-paralytic, asphyxiating, common, psychochemical and irritating. At the same time, some of them relate to weapons of non-lethal impact, such substances are often used by law enforcement services to disperse unauthorized meetings and demonstrations. For example, American police often use tear gas sprays or sedatives such as diazepam. If we talk about chemical warfare agents, the most widespread in the world are: soman, sarin, tabun, VX (nerve-paralytic action), lewisite (skin-blistering action), diphosgene (suffocating), and chloropicrin (irritant).

By the end of the 20th century, a large number of chemical weapons had been accumulated in the world, while the USSR and the USA, which accounted for the bulk of chemical weapons stocks, became the owners of the most diverse and large arsenals. Russia inherited from the USSR about 40 thousand tons of toxic substances (agents) for various purposes and actions. About 32 thousand tons of them accounted for highly toxic organophosphorus toxic substances of neuroparalytic effects: sarin, soman VX. The blistering effects: lewisite - 7000 tons, mustard gas - 700 tons, and mixtures thereof (about 200 tons). At the same time, the manufacture of chemical weapons in the USSR was stopped in the 1987 year. 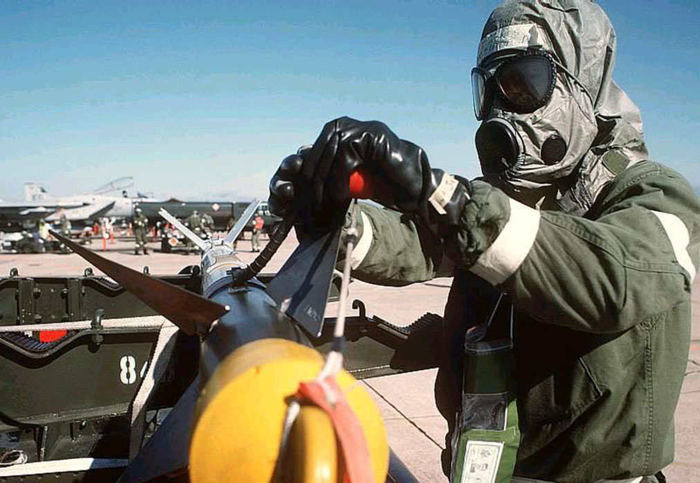 According to the Ministry of Defense of the country, about 31,5 thousand tons of chemical agents were stored in the USA. At the same time, almost half were represented by toxic substances of the neuroparalytic effect: VX and sarin, and the second with skin-blistering substances: mustard gas. In the US, the manufacture of chemical weapons was stopped in 1992 year. According to US sources, approximately 40% of all weapons were stored as ammunition ready for use (projectiles and mines of various caliber, aerial bombs, NURS, cassettes and tanks), about 60% were stored in special monochromatic containers.

By the end of the 20th century, chemical weapons were no longer viewed as a real deterrent during hostilities, although a number of states are still engaged in development in this direction. All the ammunition accumulated by this time was placed in special storage depots, for the maintenance and inspection of which countries were forced to spend millions of dollars each year. Despite the very strict storage conditions for such substances, the risk of an environmental catastrophe in these areas increased every year.

As a result, the “Convention on the Prohibition of Chemical Weapons” was opened in 1993 in Geneva for signing. Most states of the world have joined this convention, although by and large this document was conceived only for 2 countries: Russia and the USA, which at that time possessed more than 90% of all world chemical weapons stocks. This convention, which is not subject to non-lethal chemical weapons, entered into force in the 1997 year. After that, 6 countries openly acknowledged the presence of toxic substances in them - Albania, India, Libya, Russia and the United States, as well as a state that refused to be mentioned in official documents (this state was South Korea). The program for the disposal of chemical weapons started in the last years of the 20th century. 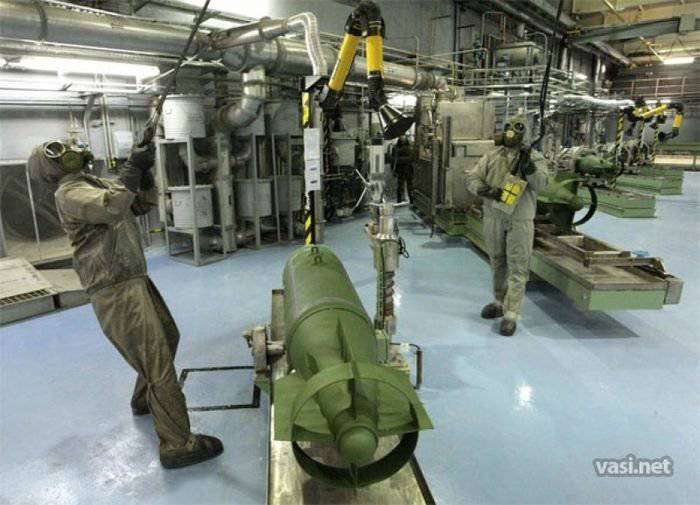 According to the international treaty, the countries that signed it were supposed to destroy 1% of their stockpiles of chemical weapons by April 2000, 20% by April 2002, 45% by April 2004, and 100% chemical weapons - by April 2007. However, due to the need to build a number of fairly technically complex facilities for the disposal of chemical munitions, the last term could be postponed to April 2012 of the year. The first right to postpone the term was used in the USA.

However, by April 2012, neither the United States nor Russia had met, in January 2012, the United States reported the destruction of 90% of their chemical weapons, and in November 2012, Russia reported the disposal of 70% of its active agents. At the same time, both states again announced the postponement of work completion dates. Since we are talking about 2-s countries with the largest reserves of chemical weapons in the world, the Organization for the Prohibition of Chemical Weapons, which was established to monitor the destruction of chemical agents, has prepared a new schedule, according to which 100% Chemical agents must be destroyed before the end of 2015. However, this time both countries almost exactly again break.

Washington has not officially requested a rescheduling, but in the 2010 year, the Americans admitted that they could completely get rid of chemical weapons stocks only by the year 2021-2023. Today, in the US, detoxification is waiting for the order of 4 thousand tons of agents. In this case, the US law on the disposal of chemical munitions provides for 2 significant breaks in the process - from 2012 to 2015 years and from 2017 to 2018 years. At this time, the United States hopes to build new plants for the destruction of chemical agents near 2's large warehouses Blue-Grass and Pueblo, which contain 3,2 thousand tons of toxic substances. Russia will most likely have to extend the disposal period. It is assumed that the deadline for work may be shifted to 2020 year. The reason for the breakdown is to delay the commissioning of the last plant for the disposal of chemical munitions "Kizner" in the territory of Udmurtia. 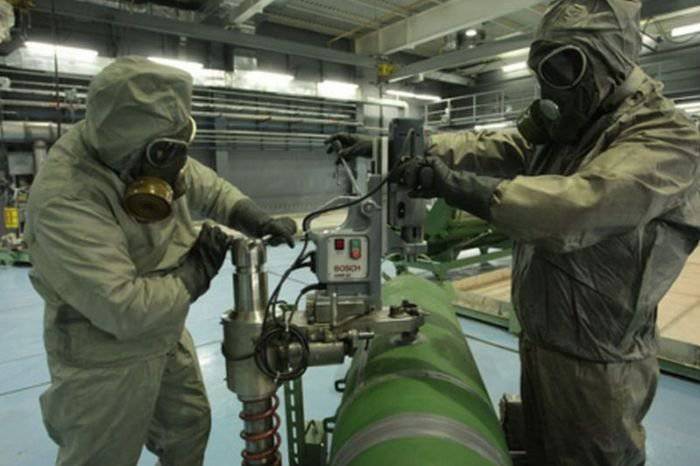 According to the targeted federal program for the destruction of chemical weapons, which was approved in December 2012, the launch of the enterprise in Udmurtia is scheduled for 2015 year. At the same time, according to the plenipotentiary representative of the President of Russia in the Volga Federal District Mikhail Babich, the plant will be able to start work at the end of 2013 of the year (not in full force). However, even in this case, he will not be able to have time to dispose of the thousand tons of chemical agents remaining in the country of 5,5 by the 2015 year. It is assumed that Kizner will be able to dispose of no more than 1,8 thousand tons of chemical weapons per year. In this case, it is necessary to dispose of 5 thousand tons of organic substances.

It is reported that the plant opened in Kizner will be adapted for the destruction of complex ammunition. We are talking about missiles, bombs and artillery shells. In addition to chemical weapons, such munitions also contain explosives. Disposal of this kind of ammunition takes more time, since they must first be disassembled, after which a separate detoxification of toxic substances and destroy the explosive. At the same time, in Russia, the neutralization of soman and sarin is carried out using water and monoethanolamine, VX - potassium isobutylate, lewisite - by the method of alkaline hydrolysis. 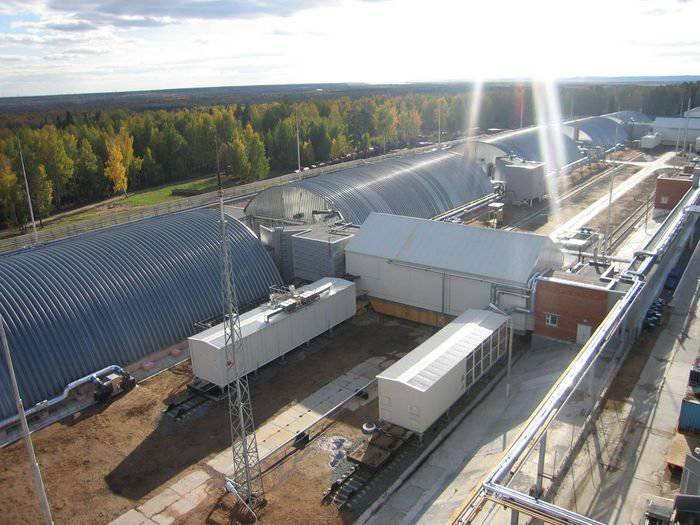 Chemical Weapons Destruction Plant in Kambarka
At the same time, complex ammunition in the USA is destroyed without dismantling, for these purposes the installations SDC200, DAVINCH, T-60 are used, which are designed to eliminate artillery shells of caliber up to 155-mm, as well as rockets. In these installations, the munitions are blown up in a special chamber, after which the excreted chemical agents, together with water and oxygen, are fed into the combustion chamber. Already from there the products of combustion are transferred to a filter system with activated carbon and neutralizing chemicals, after which the gas purified from harmful impurities is simply vented to the atmosphere.

According to the Organization for the Prohibition of Chemical Weapons, at the end of January 2013, 16 thousand tons of various chemical agents, which is 55,5% of all world reserves, were destroyed during the 78 years of the convention on the planet. About 15 thousand tons of chemical munitions that were produced in 1970-80's are still not destroyed, of which about 10 thousand tons are from Russia and the United States.