Izhmash turned its attention to the layout of bullpups

April 8 2013
53
Recently in the media slipped news that “Izhmash” decided to reconsider its views on weaponproduced in the enterprise. Among other things, it was noted separately that the weapon will now be produced not only in the classical layout, but also in the bullpup layout, which is uncharacteristic of Izhmash products. 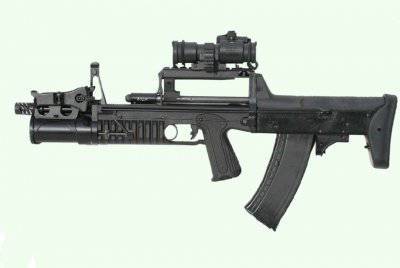 Personally, I treat this kind of news, as well as the composition of the weapon itself, in two ways. On the one hand, of course, it is not bad that the weapon will be more compact, but we should not forget about the drawbacks of the bullpup layout, although many of them are not so significant, and the main problems of this layout have long been resolved. So, for example, I consider the main drawback of the bullpup layout to be a window close to the shooter’s face for ejection of spent cartridges, which can bring serious inconvenience both due to the powder gases and when changing the shoulder to stop when shooting. The solution to this problem was the discharge of spent cartridges not to the side, but forward, along a tube running parallel to the barrel. At once I would like to note such a moment as the impossibility of clogging up this tube, and accordingly, jamming of spent cartridges. The fact is that the shells fall out not at all by a self-propelled one, but by receiving a significant acceleration from the bolt moving forward, that is, when moving forward, it not only inserts a cartridge into the chamber, but also pushes the shooting case forward. Thus, the dirt and the earth, pressed in within reasonable limits in the tube, will not interfere with the release of the spent cartridges. But all this was done and invented relatively recently, but the very layout of the bullpup has been used for more than half a century.

The first successful experience of using such a layout in firearms belongs, unfortunately, not to us, but to the British. Torneykroft's cavalry carbine, namely, this weapon was made first in the bullpup layout created in 1901. The designer offered these weapons to the armed forces as being more compact and no less effective and accurate in comparison with the models that were armed. Actually, it was very difficult to call this weapon with a carbine, since the barrel length was as much as 700 millimeters, which is even more than many rifles in service at that time, and from the definition of "carbine" and "rifle" everything should be the opposite . If we compare the weapon with the Lee Enfield Mark 1 rifle, then the proposed sample had an advantage not only in the barrel length (in the rifle the barrel was 527 millimeters long), but in the total length of the 993 millimeter weapons versus 1014 millimeters. The weight of the weapon was the same - 3,4 kilogram. Despite the fact that the weapon made the most favorable impression on the military, it was refused. First of all, it was noted that reloading the carbine was not the most convenient. In addition, the store that was shifted back was of a small capacity (5 cartridges), which could have been fixed, but the fact that it was integral was already a significant drawback, although it was also completely solvable. In general, the carbine flew, but, nevertheless, the weapon in this arrangement was further developed.

Back for the British to be listed and the first sniper rifle in the layout bull-dad SREM-1 chambered for 7,92х57, which was created in 1944 year. The length of the weapon was 965 millimeters with a barrel length of 603 millimeter, the weight of the weapon was equal to 4 kilograms. True, these weapons were also not widely used, and after the release of a small number of rifles, their production was discontinued.

Although the very idea of ​​creating weapons in a bullpup layout was missed by us first, we can boast that it was our gunsmith who made the first machine gun with such a layout. The Korovin machine gun was definitely the first machine gun in the bullpup layout, and it also had a gas chamber with an annular piston around the barrel. Actually the piston and became a weak point of the weapon. Unfortunately, the weapon was completely rejected, because the reliability was very low, because many believe that the first machine in the layout of the bullpup was a different model, although he had problems with reliability.

We are talking about a sample TKB-408, the author of which was German Alexandrovich Korobov. This sample with its own name "Bull" was first presented in the competition for the Soviet Army machine in 1946 year, then, as later, Kalashnikov bypassed Korobov, although the sample TKB-408 showed higher accuracy of fire, but lost in reliability. I think that if the designer had time to finalize his automaton, he could be a serious competitor in the competition for the Kalashnikov, and who knows, maybe the development of domestic automata would go a completely different way. But let's not dwell on these weapons, especially since almost all samples of German Alexandrovich Korobov’s automata are described here in this article. 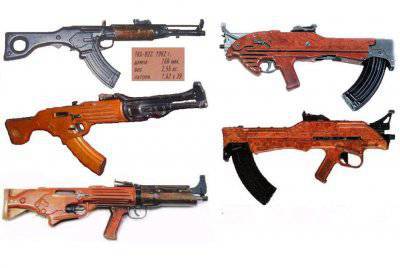 Despite the unsightly appearance of the first types of weapons, they developed and at the moment the weapons in the layout of the bull-pap can be found as the main weapon of the armies of many countries, and not only in those countries where the armed forces are only for beauty. So the idea of ​​creating weapons in a bullpup layout is quite viable, especially as this has been repeatedly confirmed by domestic samples. So we are waiting for what will please us "Izhmeh" in the near future.

PS According to the above-mentioned samples, detailed articles will appear in the near future.