The near future of the Chinese UAVs

April 4 2013
9
In the past few weeks, the situation in East Asia has escalated to the limit. The two Koreas once again exchange unfriendly statements and actions, which greatly increases the likelihood of war. Meanwhile, their big neighbor, China, continues to modernize its armed forces, and also monitors the situation on the Korean Peninsula. Among other tools for tracking events in a troubled region, unmanned aerial vehicles are used. In recent years, in accordance with global trends, China has been actively engaged in the development of this area and has achieved some success. 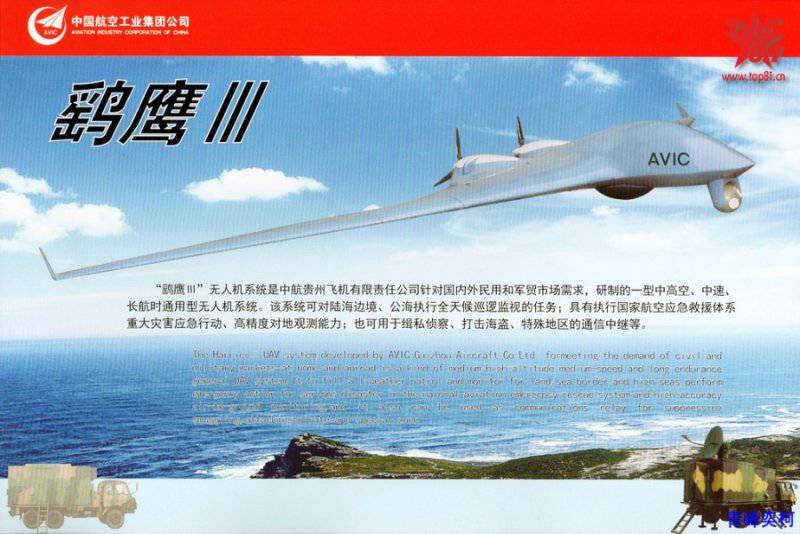 As a result of all the actions, reconnaissance drones alone are now used to patrol borders, primarily with North Korea, disputed islands that China is trying to share with Japan and Vietnam, as well as tracking some border areas. At first glance, all this looks like simple attempts to keep control of its borders and prevent their illegal crossing. However, even in this case, some third countries are beginning to worry about the actions of official Beijing.

One of the reasons for such concern is the recent statements by Chinese politicians and commanders. According to them, in the near future, China intends to begin to use the UAV for the destruction of targets outside its territory. First of all, it refers to criminals trying to escape in Laos, Myanmar or other developing countries in the region. The target for such an operation, for example, could be the famous criminal But Kham and his accomplices, who were wanted for the killing of 13 fishermen who refused to pay them. However, due to the lack of development of UAVs or the lack of a proven tactic for their use, the gangsters were taken alive during a special operation. In the future, obviously, a different approach will be applied to such criminals and no one will catch them.

One can argue about the features of such operations in the light of the presumption of innocence, but China’s neighbors are worried about another matter. They are not against the fight against banditry, but operations with the use of UAVs involve the invasion of Chinese technology in the airspace of independent states. Even small and weak countries are unlikely to take such a step, because the presence of foreign armed forces on its territory is at least strange. Nevertheless, there is information about negotiations between China and Myanmar over the gas pipeline patrol by Chinese forces. Observation is planned to be made using unmanned aerial vehicles.

To date, China has two and a half dozens of models of drones of various classes of its own production. Light UAVs are delivered to ground forces where they are used for reconnaissance purposes, while heavier models are based on airfield airfields. To date, airbases equipped with UAVs are located in only three provinces. However, over the next few years, Beijing intends to build several more bases specifically for UAVs. Two are already being built and 11 is still being planned. Interestingly, the latter will be located on the coast of the country and will be subordinated to the State Oceanic Administration.

In the past few years, China has seen a significant increase in the production of unmanned aerial vehicles. It took a little more than one year to double the park of such equipment. Thus, the production capabilities of China allow for a relatively short period of time to provide all their needs in new UAVs. From this fact comes the second reason why foreign states are concerned. By providing UAVs with its troops and security forces, China will be able to deploy full-scale production of UAVs for export deliveries. Already, Chinese unmanned vehicles of several types are supplied to Pakistan and the United Arab Emirates. Probably, contracts with these countries will not be the last.

A characteristic feature of Chinese weapons and military equipment has always been a relatively small price. Even losing on the quality of workmanship, Chinese products are able to interest a potential buyer with its value. In this regard, a number of Western experts are inclined to see in the Chinese UAVs a danger not only of a military, but also of an economic nature. In the third world, there are enough countries that wish to update the material part of their armed forces in accordance with the latest trends, but at the same time cannot afford to purchase the most modern designs. The reasons for this may be the financial condition of the country, relations with the countries producing the UAV, etc. In this case, almost the only manufacturer of unmanned vehicles with acceptable performance and at a reasonable price is China.

The international UAV market is constantly growing, new manufacturers and buyers are entering it. As a result, China is in a very good position, since it can give its products certain advantages over its competitors. Of course, American, European or Israeli companies engaged in the manufacture of such equipment are not happy with the new competitor. 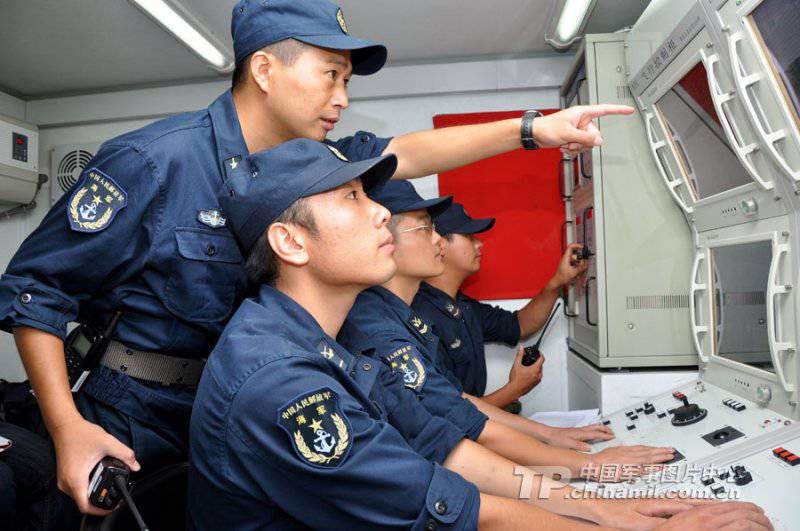 It is worth noting that the entry of Chinese drones into the international market, although it can deliver a lot of problems to foreign firms, is not a major cause for concern. Not so long ago, a report was published on the “Project 2049” regarding the prospects for the Chinese armed forces. Among other things, this report talks about a possible confrontation between the US Navy and the Chinese unmanned aerial fleet. The range of Chinese UAVs may include the US Air Force and Navy bases in Japan and on the island of Guam, as well as naval formations located at a certain distance from the coast of China.

All these concerns are related to the development of long-range UAVs, including drums. The United States already has a technique of this class, which speaks of the fundamental possibility of creating such devices by China. At the same time, due to the peculiarities of the information policy of Beijing, it is now impossible to say with certainty when the Chinese Air Force can "get" the US bases. In this regard, it is proposed, without waiting for problems, to improve air defense and missile defense in the Pacific region. In addition, the special importance of electronic warfare systems and means of cyber warfare is noted.

Thus, one of the main shock forces of the Chinese army in the Pacific may be unmanned aviation. In combination with the planned development of the naval forces, which in recent years have received new ships, the development and construction of new UAVs by China is able to change the balance in the region. In addition, we should not forget the foreign economic consequences of the active work of the Chinese unmanned industry. One way or another, Chinese UAVs will show themselves in the very near future and all neighbors of China should prepare for this.