April 3 2013
10
Immediately make a reservation that the authentic stories these tanks it is covered with darkness, since most of the available foreign sources either do not mention it at all, or mention it in passing. Therefore, we propose to draw conclusions from the above to the reader himself. 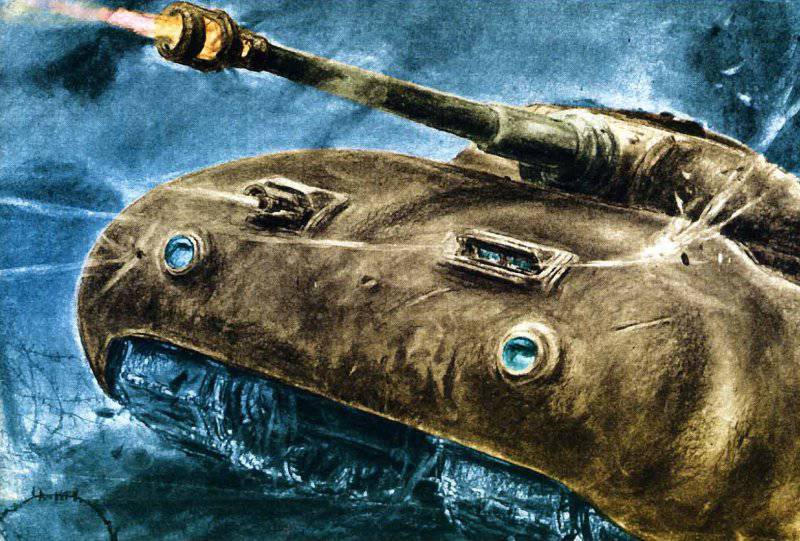 Fantastic battle with the participation of the new German "all-destructive" tank PzKpfw 10. Illustration from the "Berliner Play Zeitung" 1944

IN MARCH 1944 G. ON THE TABLE I.O. the head of the OGK NKTP Bera laid down a message with the following content:

"According to available data, German tank builders create a heavy 60-ton tank of a new type, called the T-9 or T-10 ...

The armament of the new tank is very strong and consists of a new 88-mm or 128-mm cannon with a long barrel and 3-x machine guns (1 anti-aircraft guns).

Presumably, the tank has a powerful aviation Daimler-Benz engine and a gas-electric transmission in the form of a transmission of the Ferdinand self-propelled guns ...

The armor protection of the new tank is not less than 150-200 mm from course fire angles ...

The main feature of the new German tank is the extensive use of large cast armor parts in the era construction of the hull and turret (there is information on the use in the tank design of the solid cast hull and turret), making it suitable for mass production and giving it a form that is very advantageous from the point of view of the propensity of armor-piercing shells to ricochet ... Currently, German enterprises are already leading the mass production of casting towers for a new heavy tank, which is expected in the fall ...

It is possible that the appearance of this tank was caused by the study of the German designers of cast turrets and hull parts of T-34, KV-1 tanks and our new heavy IS tank. "

Where this information was obtained from is unknown, how exact the exact date of its appearance in the USSR is unknown. Apparently, there are intertwined scattered data about the new Tiger Ausl V. sneaker better known under the name "Royal Tiger" (good, the first cars of this type actually carried the cast towers of F.Porsche construction), as well as rumors about an already tested "little mouse" and German propaganda editions second half of the war. Rather, it was all of this kind of fantastic patriotic publication in the Berliner Illustrator Zeitung (pictures from which are shown here}, and that was the source referred to in the above letter. It is unlikely that such a mythical project took place in Germany at the end war, but in the USSR, he caused some confusion. 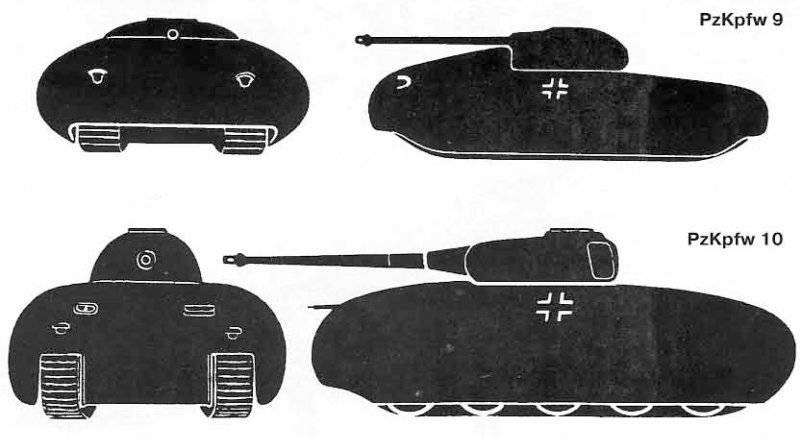 Appearance of "IP in German" - PzKpfw 9 and PzKpfw 10. Illustration from "Berliner Illustrate Zeitung" 1944

"According to your request from 18.04.44, we have the following to report:

3. We believe that the German industry mastered armor casting of towers and tank hulls is impossible due to the lack of the necessary range of alloying components in Germany at present, which is confirmed by studies of the chemical composition of rolled and cast armor tanks Tiger and Panther ...

6. German cast armor of high hardness of large thickness is not reliable protection against armor-piercing shells of large masses ... "

From this we can conclude that the head of the OGK NKTP apparently attracted armor specialists to study the scattered data on the new German tank with the "cast armor hull and turret", which was natural for those conditions.

And in June, 1944, pusg.mo, which features a "new heavy tank with cast armor," receives and the beginning. TsAKK V.Grabin:
"... According to the data obtained in Germany, the development of a new heavy tank protected by cast armor 150-200 mm thick is being completed in Germany ... Please complete the plans for testing new anti-tank guns of a large caliber, including 122-mm caliber and 130-mm ... In the program of their tests include a clause on the mandatory verification of penetration of cast armor with a thickness of 200-mm Obtaining samples of cast armor of the specified thickness agreed with UZTM (Muzurukov).

On the performance report.
Signed - D.Ustinov
"

Shortly after the noted activity in the correspondence on the battlefields, new German heavy tanks really came out, which caused a surge of interest in their person, but they had almost nothing to do with what was expected, which was reflected in the research institute 18’s study of the Royal armor samples. tiger "next sentence:
"... contrary to the information received from the head of the OGK NKTP, the new German heavy tank has no large parts obtained from liquid armor in the hull structure and turret ..."

It seemed you, the question was removed from the agenda, however, the T 9 and T-10 indices were still heard in the Soviet documents of that time. In the note accompanying the certificate of the most interesting samples of trophy combat equipment discovered on the territory of Germany, there was a small but very capacious postscript:
"Studying the received technical and project documentation, as well as conversations with German specialists ... it was not possible to detect the projects of the heavy 60-ton tank T-10."

So the question is; "Was there a boy?" - Everyone can answer within their own personal opinions.

Ctrl Enter
Noticed a mistake Highlight text and press. Ctrl + Enter
We are
Bronedrezina "Benz": the firstborn with a difficult fateWunderwaffe for Pantservaffe. Description of the design of the tank "Mouse"
10 comments
Information
Dear reader, to leave comments on the publication, you must to register.