April 3 2013
4
Last week, another international maritime and aviation Salon Langkawi International Maritime and Aerospace Exhibition (abbreviated LIMA). Over the twenty-plus years of its existence, this event has managed to become one of the most famous exhibitions in its category. Despite the remoteness of the island of Langkawi from the main countries producing ships and aircraft, the LIMA salon constantly gathers a lot of guests and serves as a place for signing a large number of contracts. 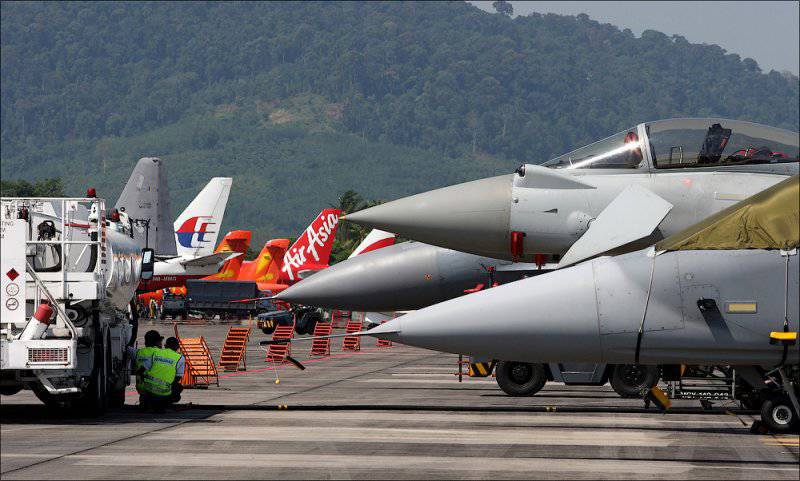 Official data on the number of visitors and the total volume of concluded contracts have not yet been published, but already now there is information according to which the current LIMA-2013 salon surpassed the previous one in the 2011 year on a number of indicators. Thus, it can be assumed that more than 400 companies from at least 35 countries took part in the exhibition. Russia was represented at LIMA-2013 by 28 factories and design offices. The number of delegates from different countries is estimated to be at least 30 thousand people. The total number of visitors not related to the shipbuilding or aviation industry, not less than 120-125 thousands. During the five days of the exhibition, contracts were signed with a total amount of about five billion US dollars.

Malaysian Salon shows growth not only in numerical terms. This year, the salon participants demonstrated their products in four new themed pavilions. These are pavilions of security technologies, "green" technologies, shipbuilding and a special platform for small companies that are just entering the market. As before, to attract the general public in the program of all the days of the exhibition were exhibition performances of aircraft and ships demonstration. At the same time, a part of such events was closed to the general public, and the entrance to another was completely free.

It should be noted that the largest time for performances at the LIMA-2013 cabin was allocated to the Russian aerobatic team “Russian Knights”. It is not the first time she performs in Malaysia, and therefore this time the organizers of the salon in Langkawi decided to make the viewers happy. It is noteworthy that the "Russian Knights" held five demonstration performances - one per day from 27 to March 30.

As if to complement the performance of the Russian pilots, Malaysian fighter pilots also performed. They demonstrated their skills in controlling Russian-made MiG-29 and Su-30MKM fighters. As some viewers say, this time the performance of the Malaysians was more interesting and more beautiful than in previous years. Obviously, the pilots of the Royal Air Force of Malaysia used the past tense with benefit and engaged in improving their training.

We can say that the Russian and Malaysian pilots have become a vivid advertisement of Russian aircraft. At the stands of Rosoboronexport and other domestic companies, information was presented on several samples of the newest aviation technology. From layouts and promotional materials of civil aircraft SSJ-100 and MS-21 to the model of the fifth generation fighter T-50. In addition, a lot of attention paid training Yak-130.

It is with this aircraft that one of the most interesting News Exhibitions. Deputy General Director of Rosoboronexport V. Komardin announced plans for military-technical cooperation, which were discussed with representatives of the Republic of Bangladesh. Earlier it was reported that Russia will give this country a loan of one billion US dollars. Now it became known what exactly this money will go to. In fact, a billion will return back to Russia, since the armed forces of Bangladesh intend to spend them on the purchase of 24 Yak-130 aircraft. Komardin also noted that the Asian republic intends to acquire other types of weapons and equipment from Russian manufacturers, but their specific list has not yet been announced for reasons of secrecy.

Simultaneously with lending and selling weapons Republic of Bangladesh Rosoboronexport intends to expand its presence in the Asian market. The Su-30MKM fighter can have great prospects in this matter. It was created specifically for deliveries to Malaysia, but it is also able to interest other countries in the region. Probably, in the future, other products of the Russian defense industry will be promoted in the Asian market. As Malaysian Prime Minister Datuk Seri Najib Tun Raza said, Southeast Asia increased the volume of purchases of weapons and equipment by 2012% in 13,5 this year and in absolute terms caught up with Europe. There is every reason to believe that this growth will continue in the future.

Unfortunately, Bangladesh’s intention to acquire Russian training aircraft Yak-130 remained the only positive moment for the Russian delegation. Expositions of domestic manufacturers of aviation and marine equipment attracted attention, but so far no possible customer has shown a desire to buy anything from what he saw. Hopefully, this time everything will follow the usual pattern for exhibitions: a potential customer gets acquainted with the products at the salon, then requests additional information, and the main negotiations and the actual signing of the contract take place only after some time.