March 29 2013
15
In the 1970-s in the USSR, in parallel with the work on the development of subsonic small-sized strategic cruise missiles (KR), which were intended to launch from torpedo tubes, work began on a fundamentally new class of marine strategic supersonic KR (M = 2,5-3). The relevant government decree on their development was adopted on December 9 1976. New supersonic cruise missiles were supposed to hit targets at a distance of 5000 km. The choice of missile flight range was determined by the desire to avoid the entry of the carrier submarine into the zone of active US anti-submarine defense. In addition, it was required to hit the enemy territory to a considerable depth.


Creation of the Meteorit-M supersonic cruise missile system with the ZM-25 cruise missile was entrusted to the Design Bureau named after Chelomey. When developing a new rocket, a lot of technical solutions were found that ensured a long flight of the Kyrgyz Republic at an altitude of more than 20 km at a speed of about 3500 km / h. The ZM-25 “Thunder” cruise missile was manufactured according to the aerodynamic “duck” design with two-quing folding vertical tail and with a folding swept wing. The rocket was equipped with two launch fluid accelerators and a cruising turbojet engine.

The rocket had a launch mass in 12 650 kg (without an accelerator 6380 kg), the maximum flight speed was 3500 km / h. The maximum launch range was 5000 km. The flight of the rocket took place at an altitude of 22-24 km, which, in combination with supersonic flight speed, a completely autonomous noise-resistant target guidance system and low radar visibility, made the missile almost invulnerable to air defense and missile defense systems of those years. During the flight, the trajectory of the cruise missile to the target could be corrected using a radar system that read the terrain. 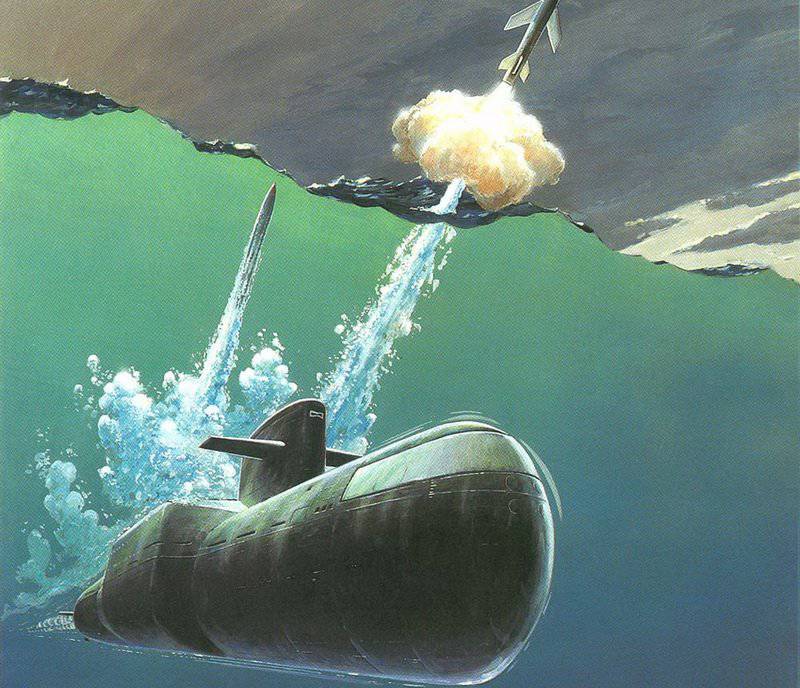 Initially, it was supposed to use as the potential carrier for the XCRP project's APCRCR, upgraded by the 949 project. But the design developments made by the TsBB MT Rubin demonstrated that to deploy the new ZM-949 cruise missiles on the Granit PCRC launcher, a radical change in design was required. The provision for the rocket to achieve supersonic flight speeds led to a significant increase in its weight and size characteristics in comparison with Granit cruise missiles, as well as to the need to place the missiles not in torpedo tubes, but in special launch containers.

As a result, Project 949M was abandoned in favor of re-equipping for this purpose the missile strategic cruisers of Project 667A, which were withdrawn from the strategic submarine forces in accordance with the OSV-1 agreement. It was supposed not only to use the boat for a series of tests, but also to use it in the future as a full-fledged combat unit fleet. For the re-equipment of the new project, a K-420 submarine was allocated, on which the missile compartments were cut and destroyed, as well as related repairs were carried out. The manufacturer selected the Sevmash enterprise.

The technical design of the retrofitting of the 667A submarine for the new Meteorit-M missile system (the Andromeda 667M project) was prepared at Rubin Central Design Bureau in the 1 quarter of the 1979 year. The essential dimensions of the KR and, respectively, the missile containers themselves, as well as their number - 12 pcs. had a very significant impact on the appearance of the future SSGN. So in the areas where the Meteorit-M missile containers are located (in the middle of the boat along the sides) the width of the outer hull was increased from 11,7 to 15 meters. The diameter of the submarine in the area, on the contrary, turned out to be smaller.

The design of the boat project 667M was two-hull. For the installation of large PU in the hull of the submarine was inserted, which consisted of 3-x compartments. PU SM-290 were placed on the 6 board. in the double-breasted space (between the light and strong hull of the boat). At the same time, the length of the submarine cruiser compared to the original submarine project 667А was increased by 20 meters. The new 4 and 5 compartments contained the Klever pre-launch preparation and launch equipment, the Kite-44 pre-launch and daily service control equipment, as well as the pneumatic hydraulic system required for its operation. In the third new compartment, which was designated 5-bis, were placed accommodation for the crew of the submarine. In connection with the installation of new equipment on the boat, the central post was redeployed.

The main armament of the new boat was to be the 12 PU of the strategic cruise missiles of the Meteorit-M P-750 complex. The missiles were located in special launchers - CM-290, which were located at an angle of 45 degrees. The type of launch of cruise missiles was “wet” underwater and surface (with flooding before the launch of PU). КР ЗМ-25 were stored in special containers with folded wing consoles, on the launching unit with a well sealed main engine. The launch of the missiles could be carried out at a speed of up to 10 nodes and a boat depth of up to 40 meters. In order to keep the submarine missile carrier in the launch corridor during salvo firing, the Bor control system was installed on the boat.

The underwater launch of strategic cruise missiles was carried out from flooded annular clearance of rocket containers with a “deaf” rear plate. Before the launch itself, the missile containers were filled with annular gap water, and to open the lid the water pressure in them was equalized with outboard pressure. At the same time, the cruise missile itself was also charged (in order to avoid its deformation). On the surface of the rocket carried the first 2 engine starting unit. After descending from the guides of the launcher, the rocket wings opened up and the main engine activated. On the surface, the 2 of the remaining engine of the launching unit was turned on, which were separated from the KR after it had gained a given flight speed. 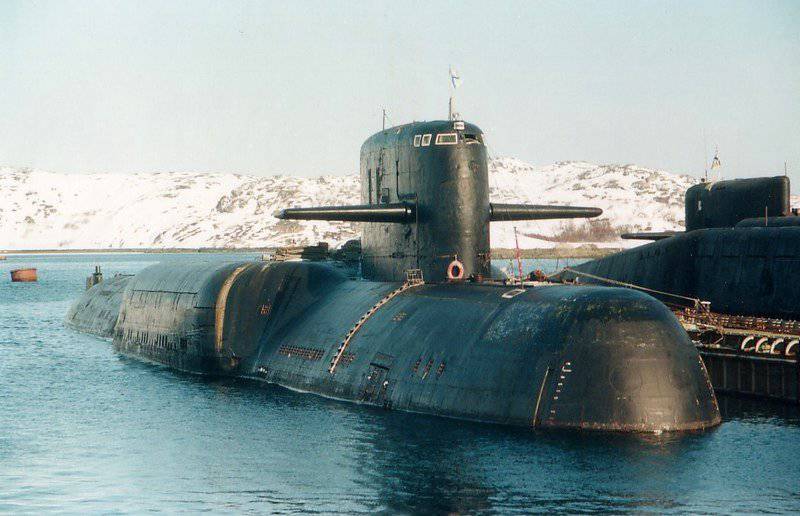 Tests of missiles with launching from a ground stand at the Kapustin Yar launch site and a floating stand on the Black Sea were carried out in parallel with the work on the conversion of a submarine. In total, within the framework of the flight test design program, XM-1982 missiles were launched from stands from 1987 to 30. At the same time, the 25 of December 27 of the year began flight design tests of the Meteorit-M complex on board the submarine. These tests were performed on the 1987 year inclusive (1986 launch in 1 year and 1984 in 1 year).

There were several reasons for the rather lengthy development of this missile system. At the same time, perhaps, the main thing was that the rocket used a lot of new technical solutions: this was a wet submarine launch of the CD with a starting acceleration stage, and a multifunctional protection complex, and an inertial guidance system with correction using radar maps of the area, etc. d. All of these fairly promising solutions in practice required careful experimental development, which in turn led to multiple re-tests, and hence to numerous postponements of the complex. As a result, state testing of the Meteorit-M complex was started only in 1988 year. At first, launches were carried out from the ground stand - 4 launch, and then from the board of the submarine - 3 launch.

Unfortunately, the number of successful launches at all stages of the tests was approximately equal to the number of unsuccessful ones, since “Meteorit-M” was still not brought to the “mind”. In addition, the cost of refurbishment for this complex of SSBNs of 667 Ave., which were withdrawn from the fleet as part of the SALT-1 contract, was too high. As a result, at the end of 1989, a joint decision was made by the Navy and industry to discontinue work on this program. After this, the re-equipment of the Ave 667A boats, as well as other submarines, was not conducted for the use of the ZM-25 strategic cruise missiles. The ship's part of this complex was handed over to responsible storage for the personnel of the submarine, and the boat itself was handed over to the fleet in the torpedo version of 1990. In 2004, the boat was disposed of.