Progress and prospects of the Mobile Landing Platform program

March 28 2013
21
Last month was rich in reports regarding the new American project of ships for the Marine Corps. The lead ship of the MLP project (Mobile Landing Platform - Mobile Landing Platform), immediately designated T-MLP-1, was launched last year and has since been tested. Now, with a difference of several days, the naming ceremony took place, and the current progress in the tests and the fate of the ship were announced. 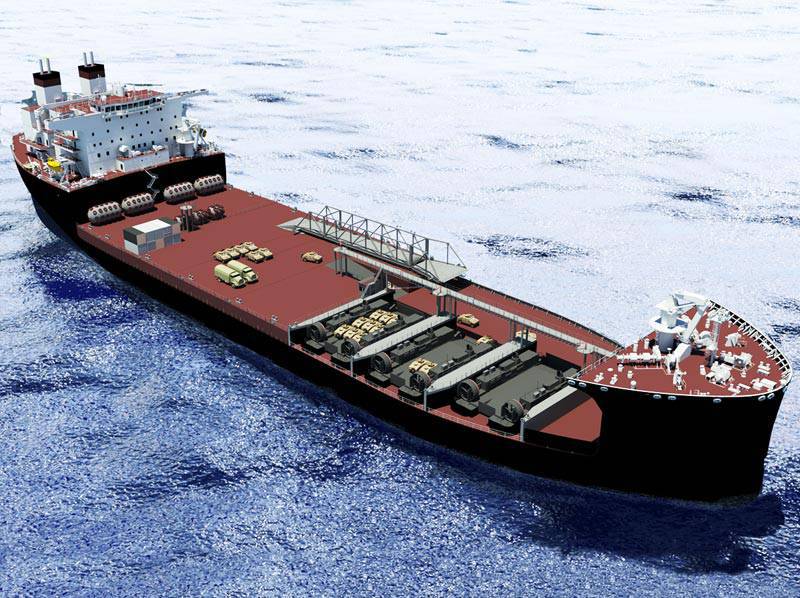 March 1 held the ceremony of naming the new ship. The T-MLP-1 will now be named USNS Monford Point. The ship is named in honor of the famous base of the US Marine Corps in North Carolina, which in the forties of the last century were trained around 20000 black soldiers. Many of them showed themselves in battles and won state awards, bringing deserved glory to the place where they were trained. According to the US Navy Minister Ray Mabus, the need to name the new ship in honor of the heroes of Montfort Point and recognize their achievements has long been overdue. Now these plans are fulfilled.

A little later, the Ministry of the Navy announced that the test cycle of the lead ship of the MLP project was completed. The fleet and representatives of the company-developer General Dynamics conducted all the joint work on the basis of the US Navy in San Diego. According to reports, the ship is not yet ready for full operation and the next few months will be spent on the elimination of minor problems and deficiencies. Their specific nature is not called for objective reasons. Since the T-MLP-1, despite its appearance, is a combat landing craft, no one is in a hurry to disclose all the information about it.

However, it was announced that previous plans for the timing of the transfer of the naval forces and the start of operation will remain the same. As previously reported, the lead ship T-MLP-1 will be handed over to military sailors during the second or third quarter of the current 2013. The development of new equipment and crew training will take several more months, so full operation will begin only in the 2015 year. During this time, the US Navy, General Dynamics and the NASSCO shipyard plan to build a second ship of the T-MLP-2 project, which has already been given the name: USNS John Glenn. At the end of 2013, the third ship of the series will be laid. 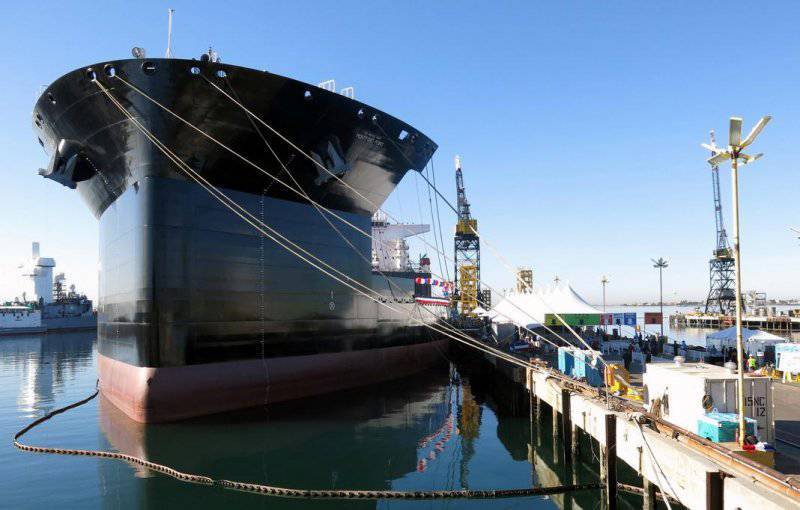 The US Marine Corps and Navy have high hopes for the MLP project. The fact is that such vessels, in contrast to the universal landing craft (UDC) of the Wasp and America projects, are capable of performing a number of transport tasks with greater efficiency. These benefits are complemented by a relatively small price. The MLP project was made on the basis of commercial Alaska type tankers already mastered in production. This has a corresponding impact on the price of development and construction. So, the head UDC of the America project cost the Pentagon 3,4 a billion dollars. For the construction of the first ship of the type MLP had to pay several times less - "only" 500 millions. Even with a reduction in the cost of new UDC in connection with the mass production of “Mobile landing platforms” will retain unconditional financial leadership.

By their dimensions, MLP ships differ from UDC America sizes (length 233 m, width 50 m versus 257 and 32 m, respectively), but they have almost twice the displacement of about 80 th. Tons. Like universal landing ships, MLP have a large deck with an area of ​​about 25 thousand square feet (more than 2300 square meters), on which helicopters and aircraft of suitable types can be transported. First of all, it is MH-60 and MV-22. Inside the ship's hull cargo holds are located. A characteristic feature of the MLP project is a complex of fuel tanks with a total volume of about a thousand cubic meters of 1,4. These tanks are primarily intended for the transport of JP-5 aviation fuel.

According to reports, there are three LCAC hovercraft hangars in the front of the holds. Each such boat can take on board almost 70 tons of cargo and deliver it ashore at a speed of more than 40 knots. Thus, with over-the-air landing only using hovercraft, ships of the MLP type have the same capabilities as the UD Wasp. At the same time, up to three can be delivered to the shore by water tanks or up to 550 infantry. With certain reservations, the potential for the transfer of troops by helicopters or MV-22 tiltrotopes can be considered equal. One way or another, MLPs are capable of performing a number of UDC-specific tasks with at least no less efficiency.

A characteristic feature of the Mobile Landing Platform project is the fact that such ships have a modular design. This means that, at the request of the customer, the ship can be adapted not only for carrying and landing troops, but also for carrying out transport tasks. It is not difficult to guess what kind of cargo possibilities a ship created on the basis of a tanker may have. In addition, it is already possible to use the MLP as a supply vessel. In this case, one such transport during the trip will be able to provide fuel, provisions and ammunition to the whole ship group.

One of the main advantages of the "Montfort Point", "John Glenn" and other ships of the series are their capabilities for cruising range. Due to the specific "tanker" layout, the ship MLP is able to accelerate only to 15 nodes, but at the same time to overcome more than 9500 nautical miles with one fuel station. With such capabilities, as expected, “Amphibious platforms” will be able to operate far away from the bases, performing not only landing, but also transport functions. In fact, the characteristics of the range and modularity of the design allow the use of the MLP as a kind of floating warehouse. 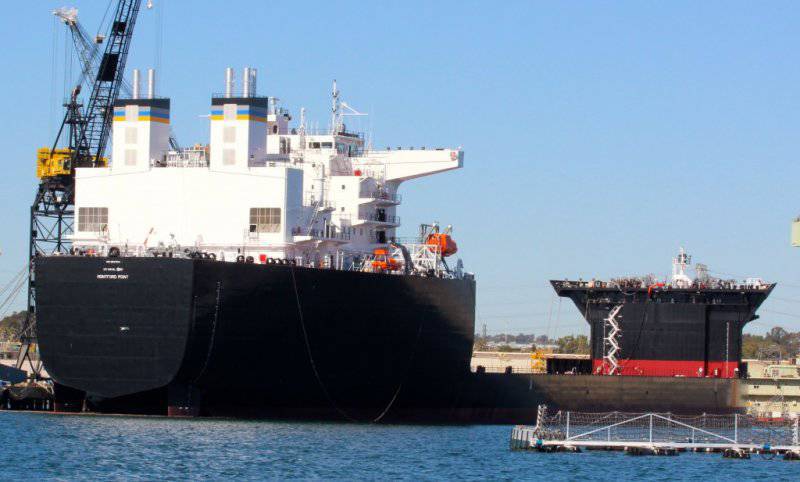 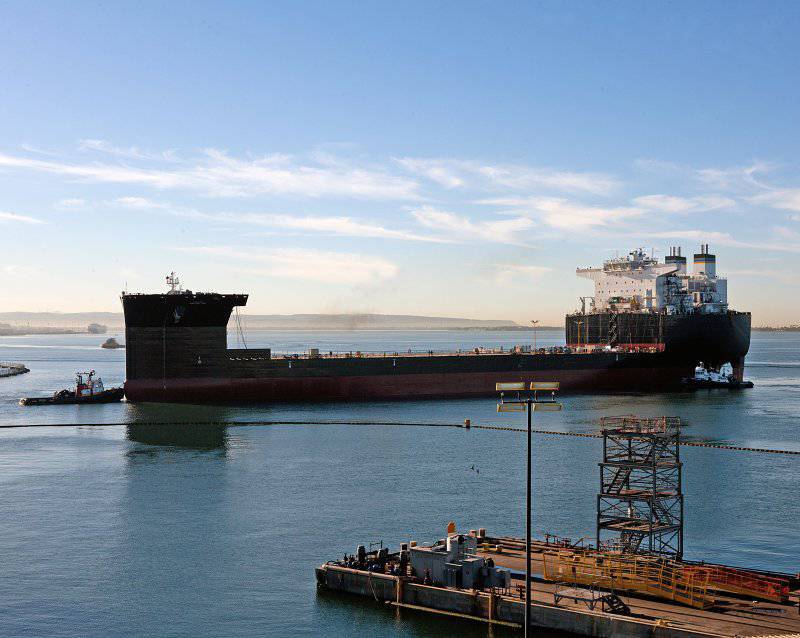 Often in the description of the Mobile Landing Platform project, the specific appearance of the ships is mentioned. They are not much different from ordinary commercial vessels. Therefore, already now, before the official adoption of the T-MLP-1 in service, certain concerns are often expressed. It is argued that such a feature of ships in the future may have not very pleasant consequences in the light of international maritime law. An MLP ship may be disguised as a civilian tanker or a dry cargo vessel, which is not allowed by the relevant agreements. Some time ago, in the publication The Defense Industry Daily, it was claimed that the new landing ships would legally serve not in the US Navy, but in the Shipping Command. There was no official confirmation of this, so the legal question still remains open. It is worth noting that the hidden presence of warships in any area is not a popular method in the United States. Americans - primarily the US Navy - prefer to go out openly, showing strength.

Anyway, new ships are already being built and will be put into operation within a few years. The combination of capabilities and cost of the MLP platforms transparently hints that the command of the ILC and the Navy, in contrast to the leadership of other branches of the armed forces of the American armed forces and the highest circles of the Pentagon, have already found an acceptable way to reduce their costs. In addition to full-fledged UDC, they purchase ships capable of performing not only landing tasks. In the light of recent trends, this initiative could be an excellent example for other branches of the military.

Ctrl Enter
Noticed a mistake Highlight text and press. Ctrl + Enter
We are
Coastal Warships: Modern ApproachNew ships of the American fleet. 2013 year
21 comment
Information
Dear reader, to leave comments on the publication, you must to register.