March 20 2013
48
According to statements by Russian Defense Minister S. Shoigu, until 2020, our navy will receive 24 new submarines. Similar ships of various classes and projects will help to upgrade the material part fleet and significantly increase its combat potential. It should be noted that the update of the Navy should go in accordance with clearly defined plans. According to the latest data, the fleet command and the leadership of the Ministry of Defense already have certain views on the development of the submarine fleet over the coming decades.


General information about the future of Russian submarines with reference to the commander-in-chief of the Navy, Admiral V. Chirkov, was published by RIA News. According to her, at present, the prospects and plans for submarines are divided into three periods, each of which will have its own goals and features. The first period is already underway and will end in the 2020 year. Immediately after it, the second leg begins, ending in 2030. The third stage in its duration will be equal to the first two together and will last from 2031 to 2050 year. Despite different plans for each of the periods, they all have the same goal: to upgrade the equipment of the Russian submarine fleet and bring it to the level of world leaders. Characteristically, the amount of information about a particular stage is inversely proportional to its proximity. There is a lot of information and details about the work before the 2020 year, but the events after 2031 can only be guessed based on the available bits of information.

The main task during the first stage of renewal is the construction of new nuclear submarines carrying strategic missiles. Currently, the Russian Navy has similar ships of the 667BDR “Kalmar”, 667BDRM “Dolphin”, 941 and 941U “Shark” projects, as well as the 955 “Borey”. At the same time, the 941U and 955 projects are represented only by one boat each. Thus, the composition of the strategic forces of the Russian Navy can not be called fully modern. Older boats will eventually expire and need replacement. She will become nuclear submarines of projects 955 and 955А. The lead ship of the K-535 project “Yuri Dolgoruky” has already entered the fleet, and the second, the K-550 “Alexander Nevsky”, will start service this year. The following year, the commissioning of the third submarine "Vladimir Monomakh" is scheduled. The fourth submarine missile carrier, named Prince Vladimir, is already under construction, and in the summer and autumn of the current 2013, two more Boreas will be laid. A total of eight boats of the 2020 and 955 projects are planned to be built before the 955 of the year. After commissioning, all eight submarines will be able to simultaneously hold more than two hundred Bulava P-30 missiles on duty. This is a third more than at the same time capable of carrying all the existing projects of our fleet boats 667BDR and 667BDRM. It is also necessary to take into account the qualitative superiority of the new missiles over the old ones.

As you can see, submarines of several projects carrying ballistic missiles will give way to new submarines of one project and its modernization over the coming years. The same will happen with multi-purpose nuclear submarines. At present, the Russian Navy has a fairly wide “fleet” of projects of similar equipment. The fleet includes boats of the third generation of projects 945 "Barracuda", 945 "Condor", 949 "Antey", 971 "Pike-B", etc. The fleet command intends, over time, to end the current trend with the exploitation of the masses of boats of various projects. The current multi-purpose submarine will be replaced by the fourth-generation multipurpose nuclear submarines - the Ash project 885. Such submarines can attack targets with the help of several types of torpedoes, anti-submarine and anti-ship missiles. One “Ash” has ten torpedo tubes of a millimeter 533 caliber and eight launchers for four cruise missiles each. Perhaps the use of missiles P-800 "Onyx", ammunition of the family "Caliber" and X-101. Thus, the submarines of the 885 project can perform a wider range of tasks than any other multi-purpose submarines currently available in the Russian Navy. The lead ship of the project, the K-560 Severodvinsk, will join the fleet later this year, and the second submarine Kazan is being built. The number of required fleet "Ash" has been repeatedly adjusted. At various times numbers from six to ten units were called. Over the past few months, official data has appeared on a series of eight submarines. Nevertheless, in a recent interview with the general director of SPMBM “Malachite” V. Dorofeev, more than interesting information appeared. From the words of the official it can be concluded that the series "Ash" for some reason, reduced from eight ships to seven. Details were not voiced and at the moment there is every reason to consider this information a simple reservation. 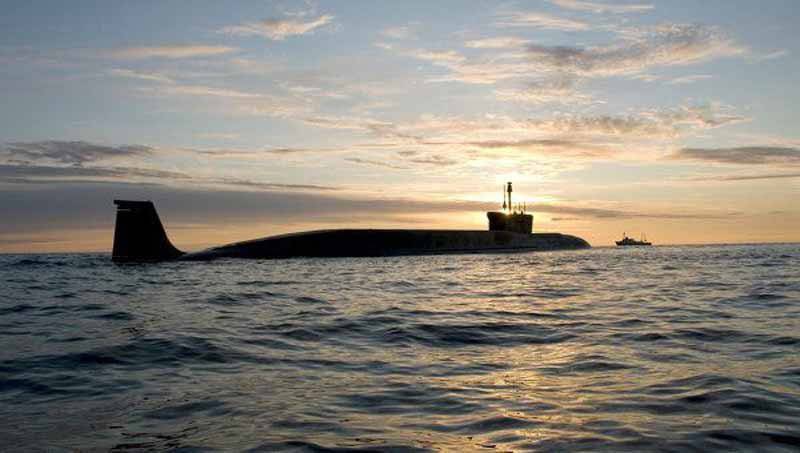 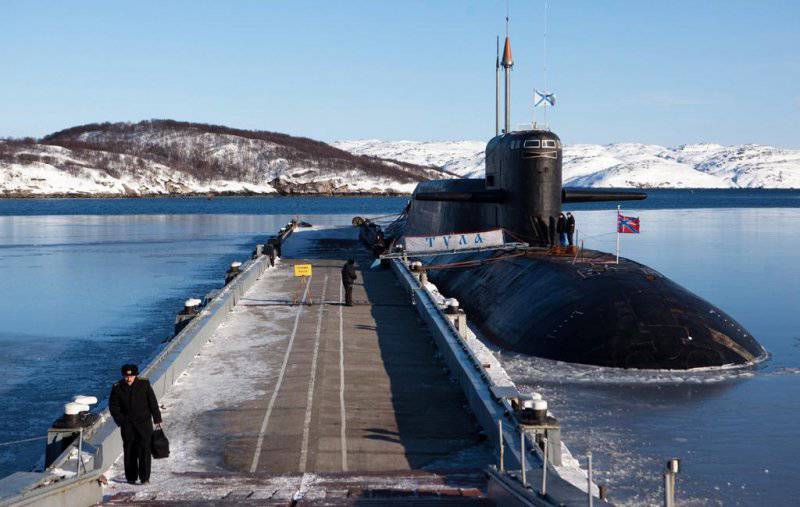 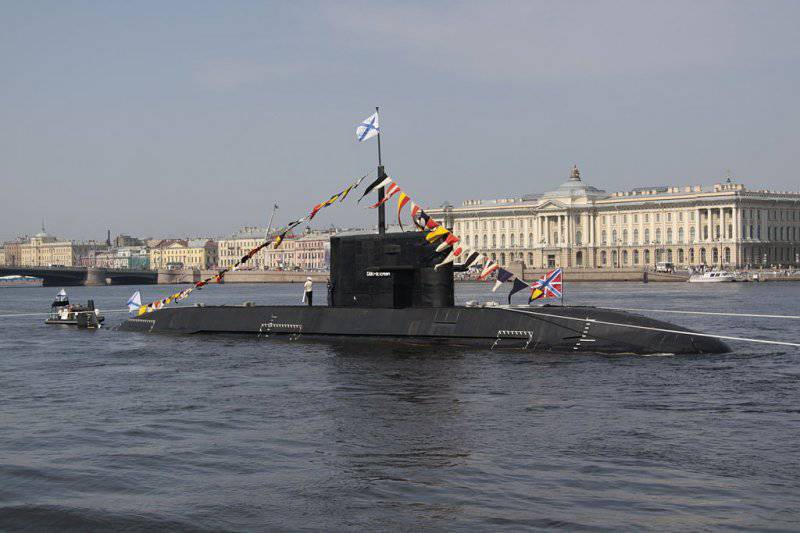 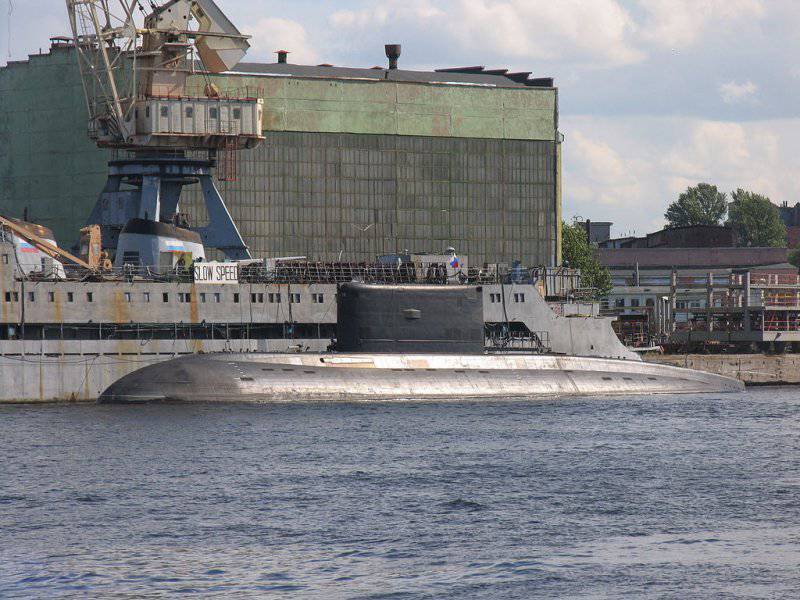 As for diesel-electric submarines, this part of the Russian Navy is distinguished by a small number of types. All existing diesel-electric submarines in the line are built on the 877 “Halibus” project and its updated versions. In the coming years, six 636.3 Varshavyanka submarines will join them. In the longer term, it is planned to build a certain number of diesel-electric submarines, created by the updated 677 “Lada” project. The head boat of this project, called the B-585 "St. Petersburg", has already been built and tested, but is still in trial operation. According to the latest data, the 677 project will be finalized, it will receive a new power plant and will probably be put into mass production in the future. Production volumes, for obvious reasons, have not yet been announced.

For all the same reasons of secrecy and uncertainty with concrete plans, it is too early to talk about the details of the implementation of the second phase, calculated for 2021-2030 years. As Admiral Chirkov said, at this time the renewal of the naval component of the nuclear triad will continue. The developed boats of the old projects will gradually be written off, and the submarines of the new fourth generation will replace them. Approximately the same thing can obviously be said about other classes of submarines. Thus, over the next 15-20 years, the main task will be the replacement of outdated equipment with a new one. At the same time, the creation of new fifth-generation submarine projects will begin.

According to the Director General of SPBMB Malakhit, electronic systems can become one of the main directions for the development of fifth-generation boats. According to this concept, the submarine must maintain contact with other ships, as well as "third-party" reconnaissance systems: aviation and companions. In this case, she will be able to respond in a timely manner to emerging threats. At the same time, the intensive exchange of information can unmask the submarine and deprive it of its main advantage. Thus, additional research is required on the prospects of such an approach. Other project details will develop along the same lines as before. New boats will be faster, stronger and less noisy than existing ones. Moreover, with regard to the maximum speed and depth of immersion, additional research is also required. Maximum results in these areas were achieved during the second generation of nuclear submarines, after which there were no noticeable breakthroughs.

By the beginning of the third stage, the requirements for sixth generation atomic and diesel-electric submarines should be formed. It is in such remote times that the bravest of the ideas currently available can reach practical use. For example, Admiral V. Chirkov mentioned that after 2031, it is possible to create and build the first domestic submarines, which are referred to as the so-called underwater platform. This means that shipbuilders will have the opportunity to build a universal submarine platform ship on which, depending on customer requirements, the necessary equipment and weapons will be installed.

For all the seeming complexity, this concept has a number of characteristic advantages. First of all, this is a high degree of unification of submarines for various purposes, but of similar displacement and dimensions. Another plus follows from unification - such submarines will ultimately be cheaper than those of equipment and armament-like, but built in the course of several independent projects. Finally, the maintenance of the material part and the training of personnel will be greatly simplified. At the same time, to create modular submarines, it will be necessary to revise a number of concepts that underlie modern submarines. Therefore, the appearance of such ships is attributed only to the distant future.

By the end of the third stage of development of the Russian Navy, even bolder projects can be expected. Already now, from time to time, proposals are made according to which boats should not be built, but equipped according to the modular principle. This means that each submarine, depending on the military-political situation, can be converted for other tasks in a short time. Modules with anti-ship missiles in this case are replaced with modules with ballistic and vice versa. This idea is many years old, but so far it remains a matter of debate. Not everyone sees expediency in such a unification of multi-purpose and strategic submarines, and in addition, a number of technical and legal factors impede the implementation of such a concept. A submarine with the ability to replace weapons and use strategic missiles is subject to international nuclear agreements weapons and therefore not too profitable to operate. In this context, we can recall Tanks with 152 mm caliber guns that did not reach serial production, including because of the theoretical possibility of using special (nuclear) shells and the corresponding legal restrictions.

Now we can assume that, in accordance with the current plans of the command of the Navy, in the thirties will use the option of a modular scheme that allows you to build ships of different purposes on the basis of one platform. In this case, one should not exclude the possibility of the development of the idea of ​​submarines, which have the possibility of relatively rapid rearmament with a change of purpose. However, such complex projects should be attributed to the second half of this century.

As we see, the main directions of the development of the domestic navy are already determined four decades straight ahead. It is quite clear that even before the beginning of the second stage (2021-2030), these plans can change several times both towards reduction and towards an increase in the number of required submarines. In addition, it is worth waiting for adjustments to the level of defense doctrine. Only a plan for the first period, which will end in 2020, can be considered more or less clear and definite. Currently, certain successes in its implementation are already visible, and trends have emerged that will benefit the realization of all plans right up to the middle of the century.

Ctrl Enter
Noticed a mistake Highlight text and press. Ctrl + Enter
We are
Update the Russian Navy. In the gland. Part of 1Admiral Gorshkov aircraft carriers
48 comments
Information
Dear reader, to leave comments on the publication, you must to register.