March 19 2013
17
It is not a secret to anyone that most often the state severely restricts the freedom of its citizens with regard weapons. And even where the firearms were in the hands of the population throughout stories state, there are certain limitations. On the one hand, it is quite clear why this is being done, but only the restrictions themselves sometimes look rather silly. So, a striking example would be the limitation of the capacity of the store ten cartridges. Provided that such a restriction is most often brought to life with the help of some variant of blocking the store feeder so that it does not fall below the norm, then no one bothers to return the original capacity to the store, and this can be done even by chance if the feeder is limited in his movement is unreliable. There are more reasonable restrictions that can be called justified from the point of view of those who fear that these weapons can be directed in their direction. The most striking example here is the lack of possibility of automatic fire. 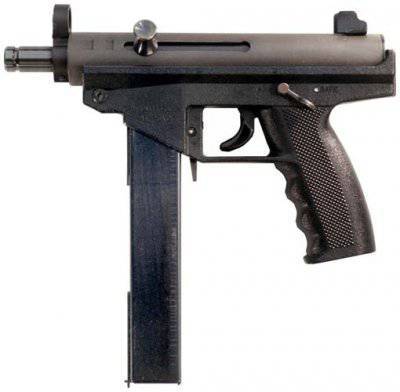 Naturally, weapons manufacturers have any restriction, like a bone in their throat, since each of them literally pulls money from manufacturers from the hands and not only from them. So, even a simple limit on the capacity of the store makes it necessary to do additional operations during production, and these are additional costs when the number of units of weapons is in the thousands. In the case of refusal from the possibility of automatic fire, production is simplified, but here’s the result ... As a result, samples like eunuchs are obtained, not always of course, but in most cases the weapon really becomes poor and it’s not clear how this can be in demand. Especially well it is traced with models of submachine guns for the civilian market. In one case, the weapon gets a longer barrel and is positioned as a carbine for a pistol cartridge, in the other case, the dimensions of the former PP are preserved. Both in the first and in the second case, it seems to me, it turns out the lack of weapons, and we will try to get acquainted with one of these samples in this article. It's about the gun, or as it is called, the “assault gun” of the AR 9, not to be confused with one of the variations of the gun FEG PA63. So, hug, cry.

This sample appeared, like other similar ones, just because the market for handguns available to civilians needs to be expanded all the time, and if a person wants to have a submachine gun, but the law says “No!”, You can make a submachine gun. gun and sell with the appearance of the subject of desire, but not characteristics. What is interesting is that the matter didn’t stop at just remaking pistol-machine guns, and even independent samples of pistols with the appearance of the PP appeared, and I personally would even single them out into a separate class, which I actually did in the homeland of these “compromises”. The original idea of ​​such weapons was to push samples to the civilian market with characteristics of pistols with a large magazine capacity and the appearance of PP. This idea was born not from scratch, but due to some bans in the US in the 80-s related to civilian handguns. It is difficult to say whether it was a good undertaking or not, it’s rather necessary to disassemble each individual sample to get to the truth, but as for the 9 AR pistol, how it came to light is completely incomprehensible. 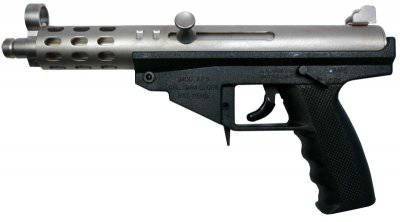 Let's start with the look of the weapon. In appearance, this is a submachine gun which, in order to reduce the size, significantly cut the barrel and cut down the butt, and if it were not for the plastic in the weapon design, then this device could be taken as a sample of the Second World War time that was processed by a file, since even the receiver has perforated continued The total length of the device is slightly more than 30 centimeters, while the barrel length is equal to the barrel length of a conventional pistol - 120 millimeters. This disgrace is fed by 9x19 cartridges from the store whose capacity is 36 cartridges. The store itself is two-row joins the weapon in front of the safety bracket. On the right side of the miracle of technology there is a rather large fuse switch and shutter knob, on the left side there is a slider for disassembling the weapon.

In general, the design of the gun is completely borrowed from the most simple submachine guns. The barrel box is represented by a trimming tube in which the free slide moves and the barrel of the weapon is fixed. On the back side, the whole thing is covered with a screw plug. Sights simple, open, represent the pillar and front sight. 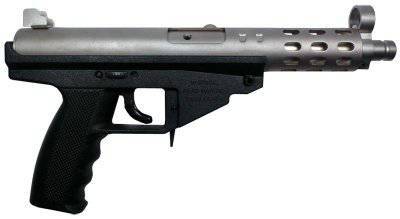 A remarkable point in this sample and many similar to it is that the weapon has even less combat effectiveness than a classic pistol. The fact is that the balance of the weapon is greatly biased forward, and provided that holding the weapon with both hands is rather uncomfortable, and this gun is not adapted for this, then the arm gets very tired when fired and the accuracy of the fire falls accordingly. So there is very little confusion from a large-capacity store, if not to say that it does not exist at all. How to carry a weapon to me personally, too, it seems with great difficulty, since even a sling for a belt is not there, if you just add it yourself. In general, the weapon is rather strange and hardly adapted to life, and even the fact that this device is almost 30 years old, cannot be an excuse for it.

As noted above, this sample is far from being the only instance from the class of “assault pistols”; it is not clear only one thing - to storm with such a weapon, weighing more than one and a half kilograms? Such samples have never been very popular, were produced in very small quantities and rarely left the country where they were created. Nevertheless, this “inanimate” class of pistols exists, and even now new models of such weapons can be found, although less and less. 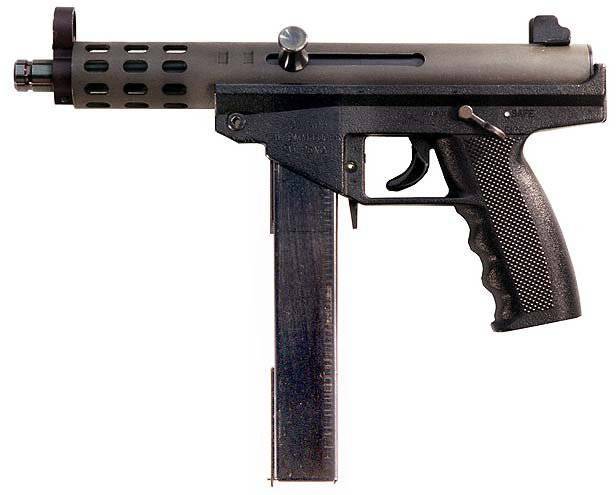 Ctrl Enter
Noticed a mistake Highlight text and press. Ctrl + Enter
We are
Firearms of combat swimmersDomestic weapons: personal opinion. Special Notes
17 comments
Information
Dear reader, to leave comments on the publication, you must to register.