March 18 2013
7
Great Britain was the first to launch its own carrier fleet. It happened back in 1918. Then the battleship “Furios” was converted into an aircraft carrier ship. As the royal leadership believed fleet, aircraft carriers were needed to solve various kinds of auxiliary tasks, for example, weakening aviation attacks of the linear forces of the enemy fleet before the main artillery battle, as well as to protect their own ships from air strikes.


In the United States and Japan, production of aircraft carriers was taken up later, but conceptual views on their use coincided with those of the English admirals (with some differences). The American and Japanese admirals believed that all aircraft carriers should act as one operational fleet compound for delivering the most sensitive strike to the enemy even before the linear artillery battle began. The distribution of aircraft carriers for individual squadrons of battleships was not planned.

If we take into account these views, it becomes clear why the so-called "big" program of building the Soviet 1938 fleet of the year, designed for 10 years, included the construction of 15 battleships and only 2 aircraft carriers, while their construction was not planned for the first five years. Then everyone believed that aircraft carriers are auxiliary vessels. The command of the Soviet fleet was going to impose on these ships the task of providing air defense of the line forces and conducting reconnaissance. It was believed that the Soviet fleet at that time was supposed to solve the task of defending its own coastal zone in closed seas. Therefore, the tasks of air defense and intelligence were largely solved by the use of coastal aviation. 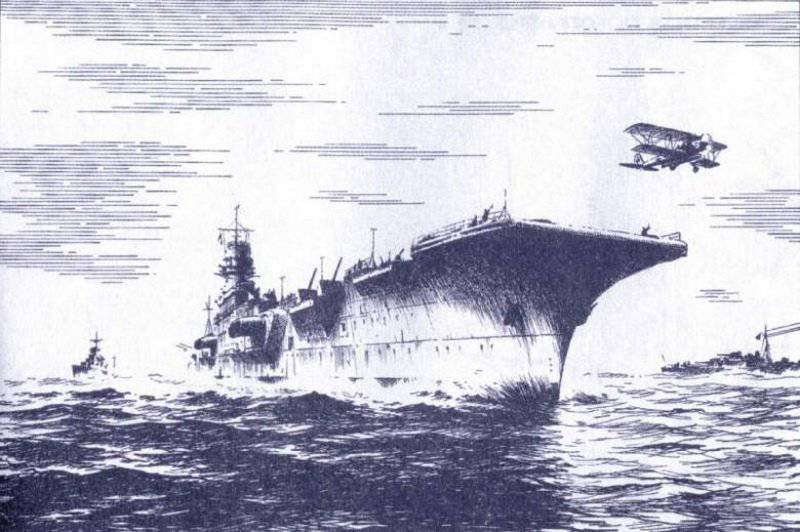 In order to foresee the enormous potential of aircraft carriers and build them in exchange for battleships, it was necessary to be as far-sighted and a brilliant naval leader, which, of course, was the Japanese admiral Yamomoto. Yes, and the Soviet naval aviation itself possessed mainly reconnaissance and fighter orientation and weak strike capabilities (attack aircraft had 15% of the entire fleet). In the future, it was supposed to maintain these proportions. Therefore, there are no particular grounds to accuse the leaders of the Navy of the USSR 1930 for lack of attention to aircraft carriers.

The first projects to create a domestic aircraft carrier appeared in March 1925 year. Then came the idea of ​​converting the unfinished battlecruiser (LK) "Izmail" into an aircraft carrier. It was assumed that its displacement will be 22 000 tons, speed of 27 nodes, size of the air group: 27 fighters, 12 torpedo bombers, 6 reconnaissance aircraft and 5 spotters. The ship was planned to arm 8 183-mm artillery installations, 8 102-mm artillery installations, four five-barreled 40-mm installations. Reservation LK was planned to save. According to a similar project, they were going to rebuild the battleship Poltava, which had suffered from a fire on board. At the same time, "Poltava" was planned to be transferred to the Black Sea. However, before the start of work has not reached, not even drafts were created.

In 1927, another proposal appeared, this time about the restructuring of the training ship Komsomolets into the training aircraft carrier. The displacement of the future ship should have been 12 000 tons, the speed of 15 knots, the size of the air group: 26 fighters and 16 attack aircraft. The ship was planned to equip the 8 with two-gun artillery installations caliber 102 mm. and two five-barrel installations of caliber 40-mm. According to its characteristics, this project resembled the English aircraft carrier "Hermes", adopted in the fleet in 1924 year. 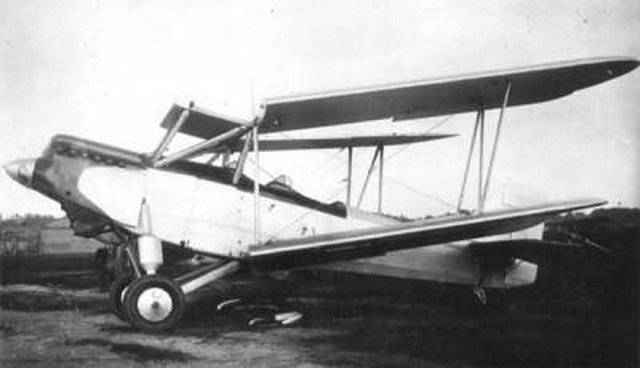 SHON - special purpose attack aircraft with folding wings
Without a doubt, this proposal could be implemented, even a sample of the deck attack aircraft called “SHON” was created. But the lack of funding for the development of a technical project and the refurbishment of the vessel, as well as the desire to carry out some work in this direction, predetermined the fate of the project. He had no results. At the same time, work within the framework of the “Small Fleet” concept excluded any possibility of building aircraft carriers. Exactly on 10 years, such ships disappear from shipbuilding plans.

From the middle of the 1930s in the USSR, work began on plans to build a large modern fleet. As a result of these plans, aircraft carriers were to join the fleet. In particular, the General Staff of the Red Army envisaged the construction of 6 of such ships: 4 for the Pacific and 2 for the Northern fleets, the plan of the Red Army Naval Forces management envisaged the construction of only 2's ships. In the final version, it was on 2-x aircraft carriers: one for each of the ocean theaters of war.

The fleet needed a ship that would be able to work together with the squadron and provide for its cover from the air. At first, the USSR began to think about a hybrid aircraft carrier and battleship. Projects of such ships from 1935 were developed at TsKBS-1. When displacement in 29 800 tons capacity powerplant in 210 000 hp stroke speed 35-39 nodes arms 9h305 mm guns 16h130 mm guns 18h45 mm guns, ship air group had to have at 60 planes . It was planned that the side armor would have a thickness of 200-mm, and deck armor - 125 mm. It should be noted that these characteristics were clearly overestimated, especially in protection and speed. It quickly became clear that the Soviet shipbuilding industry could not build a ship of such a complex structure.

Project 10581
From 1937 in the United States, according to Soviet technical specifications, they began to develop designs for battleships and aircraft carriers. One of the most curious was the project of the battleship of the company “Gibbs & Cox” project 10581 (options: A, B, C). This project was created by the owner of the company VF Gibbs, who had never dealt with this before. It is not surprising that a very unusual ship appeared on paper, which had a displacement in 73 003 tons, the power of the power plant in 304 160 hp and the speed of the 34 node. This ship was planned to equip 8х457-mm or 12х406-mm artillery installations (!), 28x127-mm and 32х28-mm artillery installations, and 36 wheeled and 4 hydroplanes. On the ship it was planned to install 2 catapults. The side booking was 330 mm, the deck booking was 197 mm.

At the same time, the technical support of such a large and grand ship was simply absent: there were no docks and slipways, machine-boiler installations, guns and towers of the main caliber. At the same time, little attention was paid to the aerodynamics of the ship, gun turrets and superstructures, combined with the angular outlines of the flight deck, were to be the cause of powerful air turbulence that would impede take-off and landing operations.

At the same time, even attempts to develop a ship of acceptable displacement (variant “C”) did not lead to positive results, and as a result, the USSR finally became disillusioned with the hybrid ships. Such projects looked good only on paper, while real construction of such battleships and aircraft carriers required expenditures, as on an 2 individual ship, and the combat stability of such a ship seemed very doubtful. During the battle of artillery ships, there was a high probability of failure of the flight deck, as well as ignition of aviation fuel reserves stored on the ship, and even during an air attack such a ship was a large and vulnerable target.

As a base, it was planned to use the 68 light cruiser hull with a machine-boiler installation, which facilitated the development of a new type of ships by the Soviet industry. At the same time, work was proceeding on the formation of the most favorable aerodynamic point of view of the appearance of the ship. Most of the artillery installations and fire control devices, ship assemblies and systems, with the exception of aviation equipment, have already been mastered by industry. Plant No. XXNX located in Komsomolsk-on-Amur was identified as the site for the construction of the aircraft carrier. The first ship was planned to be laid in 199 year.

However, the entry of the USSR into the Second World War did not allow to realize his plans. At the same time, in 1944, in the CRI-45, they completed the development of a new aircraft carrier, project No. XXUMX. The standard displacement should have been 72 23 tons, full - 700 28 tons. The length of the aircraft carrier at the waterline was 800 meters, width - 224 meters, side height 27,9 meters. Draft at full displacement of 20,9 meter, with standard 8,45 meter. The ship was planned to equip 7,23-mi turbo-gear units with power 4 36 HP each. Cruising speed - 000 knots, cruising range was supposed to be 30 10 miles with an economical course on 000 knots. On the ship it was planned to book: hangar deck - 18 mm, flight - 55 mm, sides - 30 mm. Armed aircraft carrier planned only anti-aircraft guns. The armament was to be composed of 90 paired 8-mm B-130-U turret artillery mounts, which were universal and equipped with two sets of Smena fire control instruments. These gunships were designed before the war for 2 project destroyers and 35 project leaders. However, the work on them did not come out of the design stage, and as a result they were abandoned.

Project 72
The situation was much better with the 8-paired 85-mm 92-K twin turrets, also universal. At the same time, the Smena guns and firing controls themselves were already being mass-produced, and the two-gun turret was preparing for the tests. In addition, the aircraft carrier was to receive powerful small-caliber artillery: 12 paired 37-mm anti-aircraft guns B-11 and 24 of new paired 23-mm anti-aircraft machine gun, later 25-mm 84-KM artillery systems were preferred.

The ship was supposed to carry on board the 30 aircraft, to ensure their flight was supposed to use aero-finders, catapults, special landing lights, pitching pads, etc. Issues of storage on the ship of aviation fuel and its supply to the aircraft worked out especially. For example, the gas storage facility was proposed to be separated from adjacent premises with the help of special flooded cofferdam. Jet fuel in tanks and in the gas line was under pressure in an inert gas environment. The crew of the ship was supposed to make 2000 people.

However, not a single Soviet aircraft carrier was built in those years. November 27 1945 of the year in the new shipbuilding program of the country for 1946-1955 years, aircraft carriers no place. It is believed that Stalin underestimated this type of ships, but this is not entirely true. The construction of the Navy could not stay away from the attention of the head of state. At the same time, Stalin did not take decisions without first ascertaining all the relevant circumstances. At the same time, the leadership of the Soviet Navy did not have a single view of aircraft carriers, both before and after the war. At the same time, the shipbuilding industry had a delay in development in 5-10 years, while aircraft carriers during the Second World War had already undergone a number of changes. Their displacement increased, the electronic and artillery weapons became more complicated, and the first deck jets appeared. Therefore, it is clear that before spending money on building a new class of ships, it was necessary to eliminate its backlog. In addition, in the USSR there was no specialized project organization for the development of aircraft carriers. Thus, Stalin's decision was based on knowledge of the real capabilities of the fleet and industry.