March 7 2013
23
At the end of 2012, the famous American helicopter maker, Sikorsky, began assembling the 2's prototypes of a high-speed combined reconnaissance helicopter, also called a rotary wing, S-97 Raider. The development of this rotary-wing machine is in the interests of the American army. According to representatives of the manufacturer's company, the assembly of the first two prototypes of the S-97 Raider is planned to be completed in the middle of the 2013 year, and the first tests of the new machines will start in the 2014 year.


Rotary S-97 Raider is created on the basis of a high-speed prototype of a company called X2. This model, in addition to coaxial rotors, is equipped with a pushing tail rotor and wings of a small footwell to create lift. According to the estimates of the project developers, their offspring can reach speeds of more than 460 km / h. In service with the US Army, the new S-97 Raider helicopter may replace the outdated Bell OH-58 Kiowa Warrior reconnaissance helicopters, which were in service with the US Army during the Vietnam War. 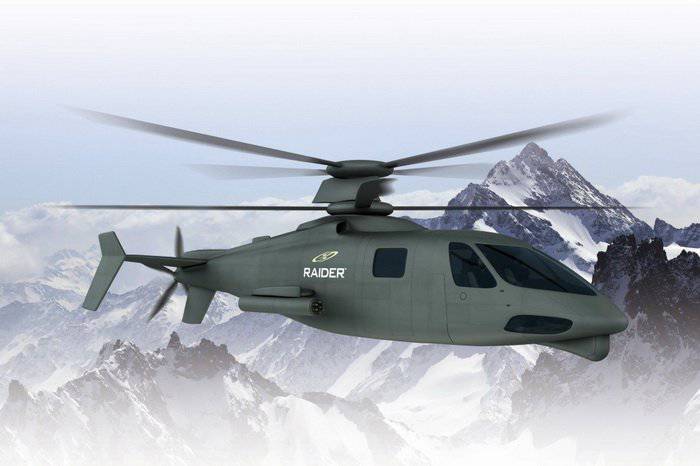 The company sent its proposals on the promising Sikorsky S-97 Raider helicopter, based on the Sikorsky X2 concept, sent to the US Army Ground Forces Command in March 2010. The raider, like the helicopter demonstrator, has the same layout. At the same time in the combat version of the helicopter immediately on the pilot's cabin on the 2-x crew members in the assault assault variant will be located on the 6 paratroopers (reconnaissance), and in the reconnaissance-assault variant, a special weapons compartment and an additional fuel tank. It is worth noting that the American designers almost went the way of creating the concept of “flying BMP”, taking into account the very high modern requirements for maneuverability and speed of the machine.

According to the estimates of the developers of this project, the implementation in practice of all the developments that were obtained during the tests of the demonstrator X2, which lasted for 2 years, will significantly improve flight performance cars. According to them, the combat version of this unit will satisfy or exceed all the requirements that are imposed on it by the command of the US Army. According to Dag Shidler, director of the program for developing a new combat vehicle, the Sikorsky S-97 Raider helicopter will allow the US Army to successfully carry out combat operations in high-altitude areas, where today no other helicopter in the world can operate with the same efficiency.

Of particular note is the fact that during the testing of the prototype X2 its design has undergone a number of changes. In particular, the configuration of the tail of the machine was changed: the designers mounted an additional stabilizer on the lower keel of the 2, having a total area of ​​0,46 square. meters (before that, to increase the helicopter’s travel stability, each of the end washers of the helicopter’s main horizontal tail assembly was increased by 0,28 square meters). The decision to increase the area of ​​the main stabilizer could be considered ideal, but such a change would lead to a serious reworking of the whole structure and a longer time-consuming process. In addition, aircraft designers have improved the machine control system. According to the creators, all of this has made it possible to reduce the load on the helicopter pilot and make the machine more manageable, especially during high-speed flights. 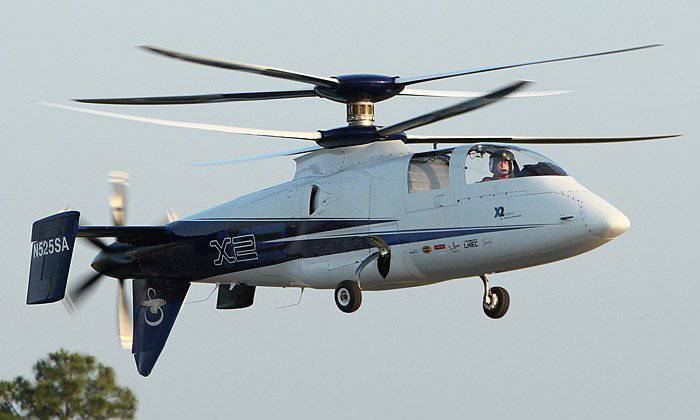 When certain individuals belonging to the Ministry of Defense of Russia wanted to “criticize” the combat effectiveness of the Russian coaxial-helicopter helicopters created in the Kirov Design Bureau. Kamov (for example, the famous Ka-50 helicopter), their main argument, in addition to the fact that “a two-story helicopter cannot be a combat one”, was that nowhere in the west are pine-tree helicopters used in this capacity. However, now this situation seems to be coming to an end, and this argument may soon lose its relevance. When in the West 1990-s, referring to the Soviet experience in building the Ka-50 helicopter, the 2-I wave of research of coaxial helicopters began, this was not accepted by everyone. But after the company Sikorsky Aircraft has developed a program coaxial-demonstrator X2, the veil flew from almost all interested parties. In the near future, co-axes, albeit not quite in the form of helicopters, may appear in service with the American army.

In any case, movement in this direction seems more than obvious, and given the ability of the United States to finance any promising developments, one can be sure that the project will be brought to its logical conclusion. On January 13, 2013, Sikorsky Aircraft and Boeing entered into an agreement in response to a request from the Applied aviation technologies on their development of the United Army Multipurpose Technological Demonstrator. The multipurpose rotorcraft, already known as the S-97, will be based on the X2 rotorcraft, according to both well-known companies.

We have to admit that this pattern of engineering looks somewhat unusual. The S-97 is equipped with two coaxial screws located close to each other, but it is moving forward not with their help, but with the help of the rear pusher screw. As a result, it is possible to eliminate the excess complexity of the design of a coaxial helicopter - at the cost of developing a separate mechanism that is responsible for the horizontal movement of the machine. It is reported that the experimental machine was able to reach speeds in 486 km / h, but this is not a record for the development of the Sikorsky company. Similar speeds in the 70-s of the last century managed to reach the helicopter S-69. 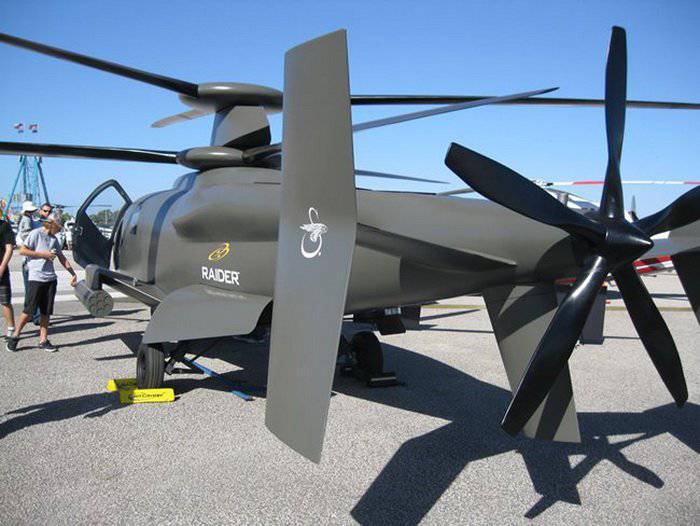 But now we are talking about the helicopter, and not about the usual helicopter. Today, all the normal layout of helicopters have fundamental limitations that prevent the increase in flight speed. It is known that the efficiency of the rotor, by definition, is lower than that of a fixed aircraft wing. It is for this reason that classic helicopters can never see the flight speeds that are available to modern aircraft, and they cannot maintain a high cruising speed. The rotor, which creates not only lifting force, but also thrust for translational motion, as well as losses to parry the reactive moment — all of these design solutions are effective only when taking off and landing from the patch, but not for quick flight ahead. So nowadays, after receiving an order for a sortie, the reaction speed of the attack link of the helicopters is equal to the speed of the same link of the Ju-87 attack aircraft, which were used by the Germans even 70 years ago.

It is for this reason that the aircraft designers from the Sikorsky company, starting from the technical appearance of the S-69B and the X2 prototype, used in the new model a streamlined fuselage, a coaxial rotor and a pusher propeller in the tail section of the car. The diameter of the main rotor is just over 10 meters, the maximum take-off weight is just over 5 000 kg. It may be noted that at first glance it is not so much for a two-seater combat helicopter.

Although the Sikorsky S-97 Raider is now called a multi-purpose vehicle, which will most often be used as an armed reconnaissance aircraft, some experts believe that in this case it’s rather a disguise of true intentions in case the project fails or there are technical difficulties. . Currently, the US Army has a large number of UAVs that are cheaper than the alleged rotorcraft on the basis of X2. Therefore, reconnaissance helicopters on its base for the US military are not the most necessary thing, while the interest of the army special forces in the novelty is quite understandable. This vehicle is ideally suited for transporting a small reconnaissance and sabotage group into the shallow rear of the enemy, and if necessary, the helicopter can provide airborne support to the paratroopers.

The impact potential of the novelty should not be underestimated: thanks to the relatively simple piloting (the movement of the rotorcraft forward is not due to the use of rotors), this device promises to make it capable of making unmanned flights under remote control from the ground. In this embodiment, without a landing on board, a rotorcraft will be able to carry more than a decent combat load. However, so far, the entire armament of the aircraft is reduced to a fleet of unguided rockets or Hellfire anti-tank systems, as well as a mobile turret with an 12,7-mm M2HB machine gun (500 ammunition ammunition). In this case, the main player on the battlefield S-97 Raider will never be, because he does not have a corresponding reservation. The trend is made precisely on the speed with a combination of some shock opportunities.

Representatives of the company Sikorsky promise that the S-97 Raider will be able to develop a cruising speed of the order of 426 km / h, and the maximum range can be 1300 km. And that and another indicator for such a machine looks more than solid and radically exceeds the performance of all modern combat helicopters in the world.

Although the aircraft due to the transport of paratroopers to the 6 is indeed becoming multi-purpose, some questions still arise. In particular, concerning the rotorcraft wing vulnerability. It may be higher than that of functional analogues, due to the greater number of screws and the relatively close arrangement of the bearing coaxial screws, which may lead to their overlap. To clarify these circumstances can only real use of the new machine in combat conditions. 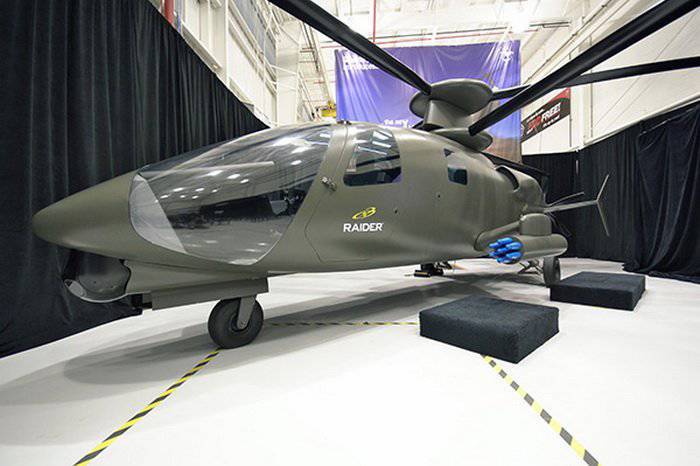 Anyway, there is still time before the tests that are to start in 2014, and it is still difficult to say something concrete about the fate of this project. In this case, a similar machine in the American army has a free niche, which it can take. The world's only commercially produced convertiplane V-22 is too cumbersome and difficult to solve some tasks that require vertical take-off and landing in combination with high speed, and classic helicopters are slow enough for them.