March 9 2013
6
After the Great Patriotic War, work on samples of weapons and military equipment for the Airborne Forces was widely launched in our country. If we talk about armored vehicles, the main efforts were focused on the creation of anti-tank self-propelled artillery. One of the first to address this task was the Special Design Bureau under the Engineering Committee of the Ground Forces (OKB IC SV) under the leadership of Anatoly Kravtsev.

The lightly armored “K-73 self-propelled floating installation” (or “floating airborne self-propelled automatic artillery installation ASU-57P”) was developed in the OKB IC in parallel with the K-75 armored personnel carrier. In 1949, at the Military Repair Plant No. XXUMX, GBTU (Moscow) produced the first prototype of the machine. The second prototype was intended for artillery tests at GNIAP GAU. Designed, but was not implemented in the metal version of the ACS-2PT, intended for towing artillery systems.

For self-propelled artillery K-73 (ASU-57P) open type A.F. Kravtsev chose the layout scheme with the front of the power plant and the aft - combined combat department and office management.

In the forward part of the hull there was an air baffle plate made of duralumin. When a self-propelled vehicle was moving over land, the flap turned and pressed against the hull. To reduce the ingress of atmospheric air into the post-screw jet of water on the rear wall of the hull there was a dural rotary shield of the propeller, which was lowered when the machine entered the water.

The carburetor six-cylinder engine from the GAZ-51H truck with its fuel supply, lubrication, cooling and starting systems was used as a power plant. The power plant was separated from the control and combat compartments of the partition.

The fuel tank was located to the left of the engine, it was made of duralumin and X-NUMX-mm special rubber was designed to prevent gasoline from leaking out if the tank was pierced by a bullet. Engine power 8 HP (70 kW) provided the maximum speed on the ground 51 km / h, and afloat - 54 km / h. The engine was started using an electric starter. Ignition system - battery. To facilitate engine start-up at low temperatures, the boiler-heater from GAZ-7,8 was used. The power reserve of K-51 (ASU-73P) on the highway reached 57 km, on unpaved roads with bumps - 234 km, afloat - 134 km. 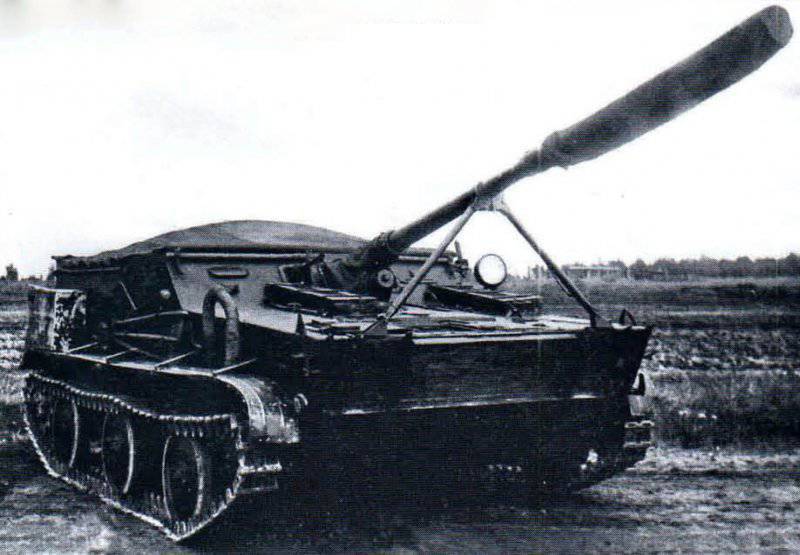 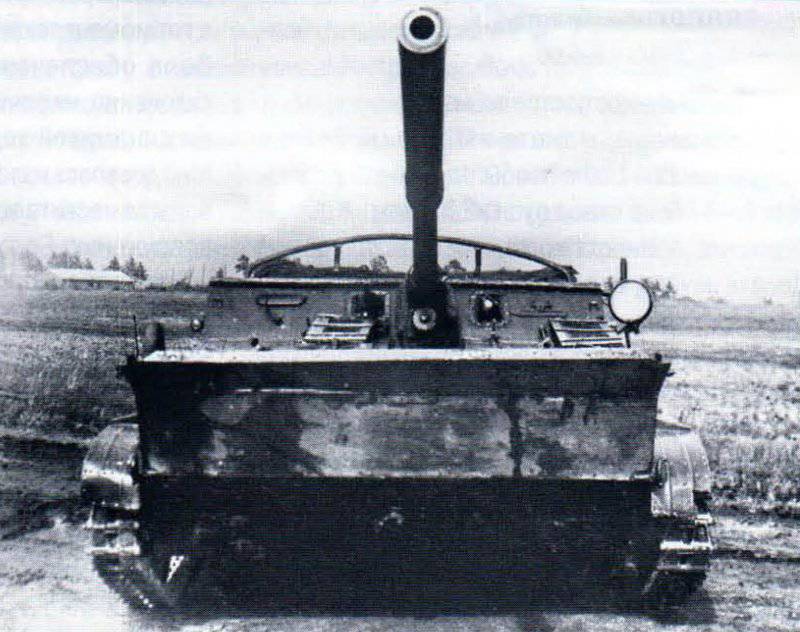 The structure of the mechanical transmission included: main friction dry friction (steel ferrodo); three-way, four-speed gearbox; main gear; two varietal friction with tape brakes of floating type; two single-stage side gearboxes; main and side driveshafts. The main clutch (clutch), gearbox (with the exception of the shaft hub of the box) and the hinges of the drive shafts were borrowed from GAZ-51.

Maneuvering the K-73 afloat the driver-mechanic made using the steering wheel. At the same time, a horizontal deflection of the three-blade propeller, which was mounted on the outer rotary part of the shaft line mounted on the rear wall of the machine body, was carried out through the drive. The deviation of the shafting with the screw provided the working angle of the 24 'machine. When moving overland, the outer part of the shaftline with a screw was retracted into a special niche located on the left (in the direction of travel) in the rear wall of the housing.

The suspension of the car was individual, torsion, with hydraulic shock absorbers at its last nodes. Hydraulic shock absorbers had the same design as the shock absorbers of the ZIS-110 passenger car. The crawler propulsion unit consisted of six single-disc track rollers with outer cushioning, two guide wheels, two cast feed wheels of the feed arrangement, and two fine-grained tracks with pinching gear. The average ground pressure was 0,475 kg / cm2. 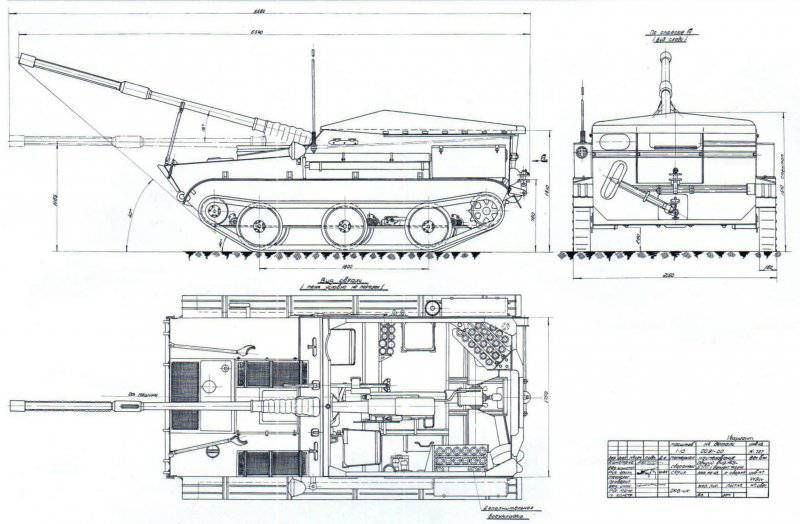 General view of the self-propelled installation of ACS-57PT (project). 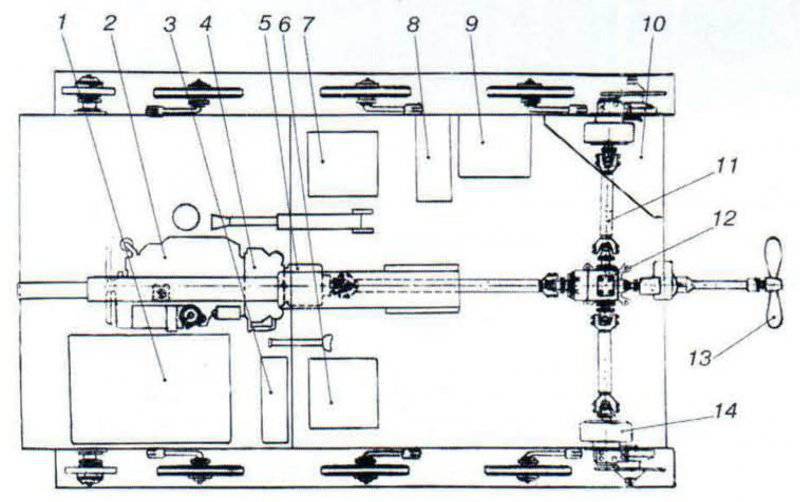 The crew of K-73 consisted of three people. The workplace of the driver was located to the right of the gun, behind him was the workplace of the loader, to the left of the gun the commander of the machine (he is the gunner). The fighting compartment on top was covered with a removable canvas awning. The mechanic-driver monitored the terrain through the viewing block in the front hull sheet and the viewing slot in the right side of the vehicle hull. In a combat situation, the commander observed the terrain through the inspection slots in the front and side hull sheets.

The basic one weapons The K-73 was an 57-mm 4-51 gun, equipped with an effective slit muzzle brake to reduce recoil, which was especially important when firing from the water. The gun was mounted in a special welded frame welded to the sides of the hull. According to the layout conditions, the gun was shifted to the left by 100 mm relative to the longitudinal axis of the machine. The height of the line of fire was 1160 mm. The secondary weapon was an SG-7,62 43-mm machine gun paired with a gun. In addition, the machine included 7,62-mm submachine gun PPS, hand grenades F-1 and signal gun SSP. When firing from a twin installation, a telescopic sight OP2-8 was used. Vertical pickup angles ranged from —4 * 30 'to + 15', horizontally - in the 16 sector. Alignment of the coupled installation was carried out with the help of mechanisms with manual transmission. The target rate of fire from the gun reached 7 shots / min. For fastening 4-51 to the stowed position there was a special stop and struts. The disengagement of the gun was made from the commander’s seat using a cable drive. 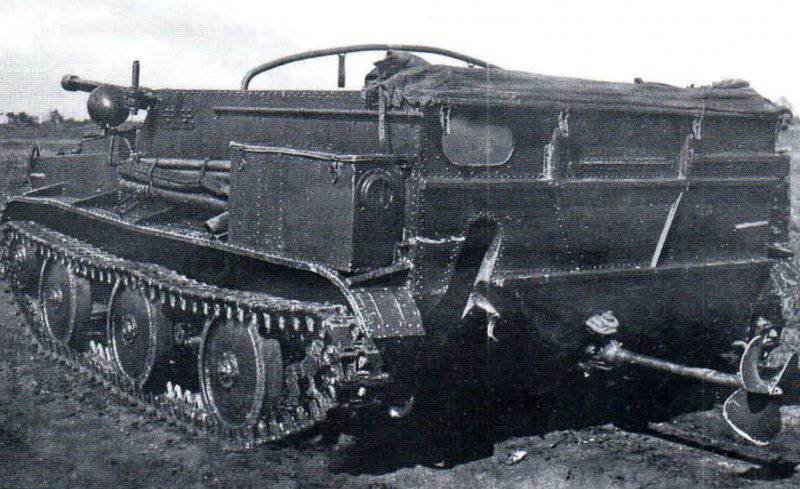 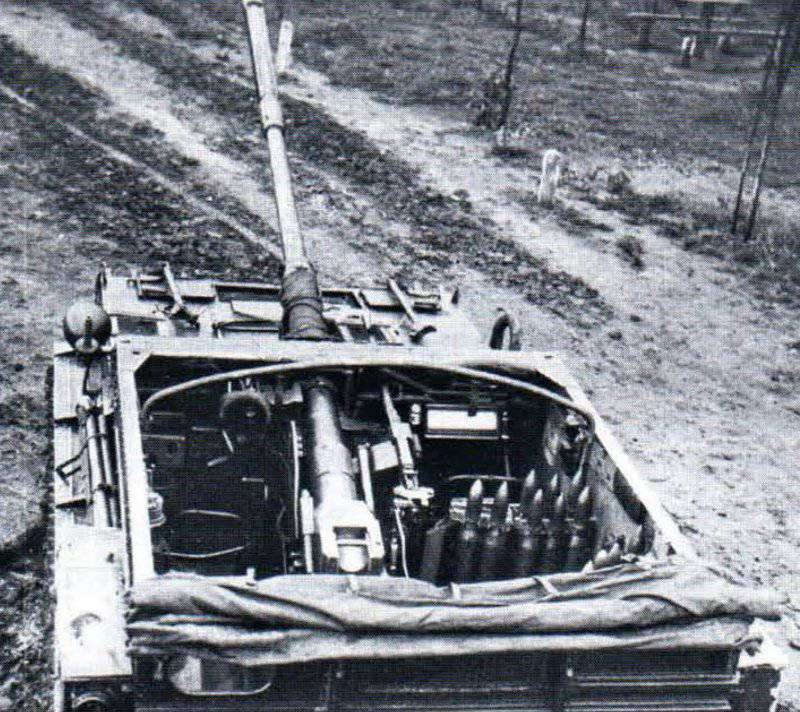 The K-73 (ASU-57P) was adapted for landing by parachute on a platform separately from the crew and in the landing method by the Yak-14 glider.

For communication, the radio station 10-RT-12 and tank Intercom TPU-47.

Electrical equipment was performed on a single-wire circuit. The onboard power supply voltage is 12 B. Two ZSTE-100 batteries and a GT-1500 generator were used as power sources.

To extinguish the fire in the car there was a coal-acid fire extinguisher OU-2.

External communication was carried out with the help of radio station YURT.

In accordance with the order of the Minister of War of the USSR from February 11 1950, at the NIIBT Landfill from April 1 to June 5, 1950, a ground test of an ASM-57P prototype airborne unit took place. The Testing Commission was headed by Major General N.N. Alymov (Deputy Chairman of the Commission - Major General of Tank Forces B. D. Supyan). The engineering committee was represented by colonel A.F. Kravtsev.

Sea trials were conducted on the Polygon test base, and floating tests — on the Pirogov reservoir and r. Moscow. Determination of the angles of entry into the water and out of the water was carried out on the river. Moscow, near the village of Agafonovo.

General view of self-propelled installation of ACS-57PT with 85-mm gun in tow (draft).

In the conclusion of the ground test it was said that the prototype of an airborne floating self-propelled artillery installation ASU-57P of the design bureau at the IK SA basically met certain tactical and technical requirements. Within the mileage of the 1000 km, components and assemblies of the ACS-57П proved to be reliable in operation. The most significant deviations from otTTT included excess weight on 90 kg (3340 kg instead of 3250 kg), the absence of a mechanical pump for pumping out water and an easily removable device for improving patency.

In addition, by a number of parameters, ACS-57P surpassed the last sample of a machine of this type, ACS-57, plant design No. 40, which was tested in 1949.
- made floating (while its weight does not exceed the weight of the ACS-57 plant number 40);
- had a 7,62 mm machine gun SG-42, paired with a gun;
- differed more comfortable placement of ammunition, which could be increased;
- possessed the best mobility (the average speed on the highway was 48 km / h instead of 26,3 km / chuASU-57);
- had a greater cruising range (234 km on the highway instead of 162 km);
- the engine and main friction clutch of the GAZ-51 were more reliable in operation than the specified M-20 units used in the ACS-57;
- it was equipped with a serial gearbox of a GAZ-51 car (instead of a special one for ASU-57);
- all support rollers, torsions and balancers were interchangeable;
-Distinning guns produced by the crew without getting out of the car. 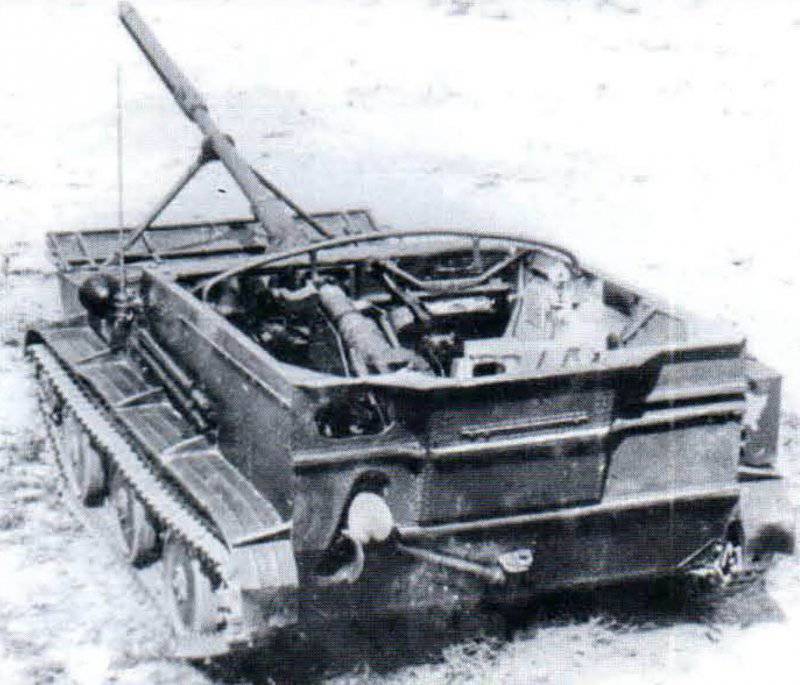 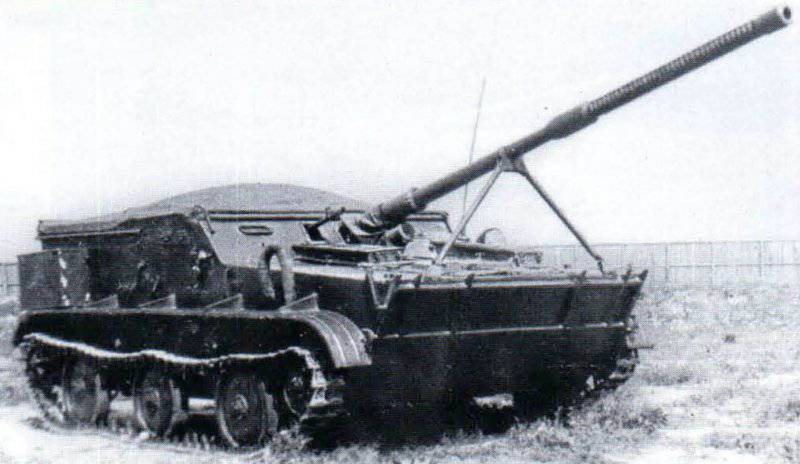 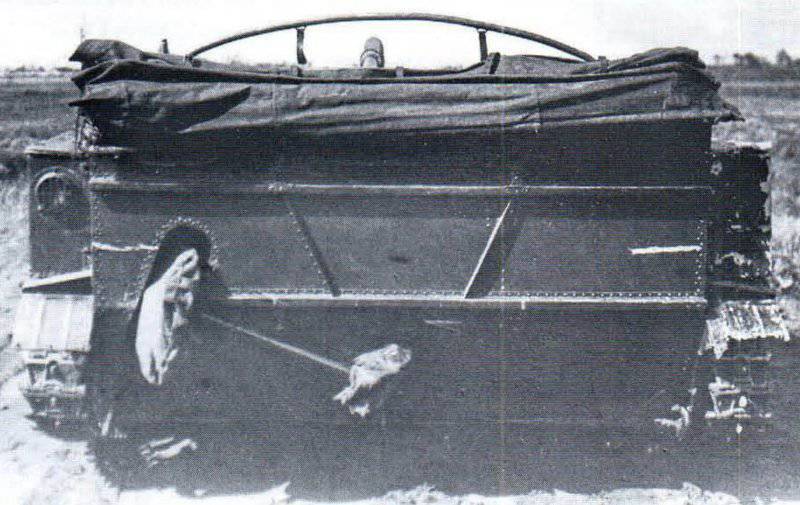 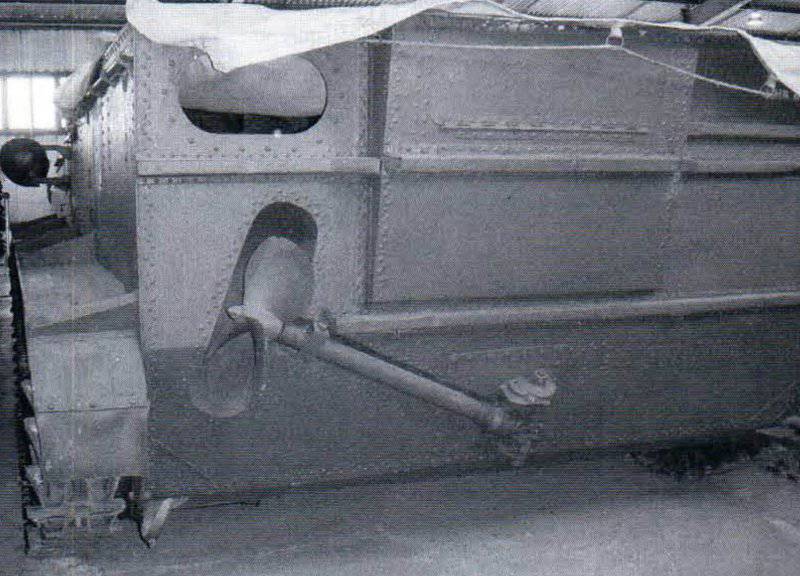 The first sample of self-propelled installation K-73 (ASU-57P). Back view. On the photo on the right: a prototype of the K-73 after modifications. Currently, this machine is located in the Military History Museum of armored weapons and equipment in Kubinka.

At the same time, the ASU-57P presented on tests had a number of design and manufacturing flaws, reducing its combat qualities. The main ones were:
- insufficient tightness of the case;
- the possibility of penetration into the body of bullets and lead spray through the embrasure of the gun, machine gun and sight;
- presence of stamping in the bottom under the engine crankcase and onboard clutches;
- insufficient strength of the ammunition and mounting parts for the gun;
- the absence of the commander of the machine oblique unit for observation ahead;
- low reliability of the V-belt transmission of the engine (on the test belts were replaced three times);
- poor performance of the engine heating system;
-the impossibility of a straight motion of the machine afloat;
- the absence of a fixed position of the steering wheel in the working range;
- large interference with the reception of radio programs due to the lack of shielding of electrical equipment;
- low reliability of lighting devices and auxiliary equipment due to the lack of depreciation.

Summing up, the commission considered it expedient to organize the manufacture of an experimental batch of vehicles for military tests, subject to the elimination of the identified deficiencies and to obtain positive results of artillery tests at the State Aviation Research Institute of Aviation. Although data on artillery tests could not be found, it is known that they took place and were successful.

From the memories of veterans of the OKB IW B.P. Babaytseva and N.L. Konstantinov follows that repeated tests (water quality was also checked at the Pirogov reservoir) were even more successful than the previous ones. Anatoly Fedorovich Kravtsev, being a master of driving, fully showed the commission all the advantages of the car. 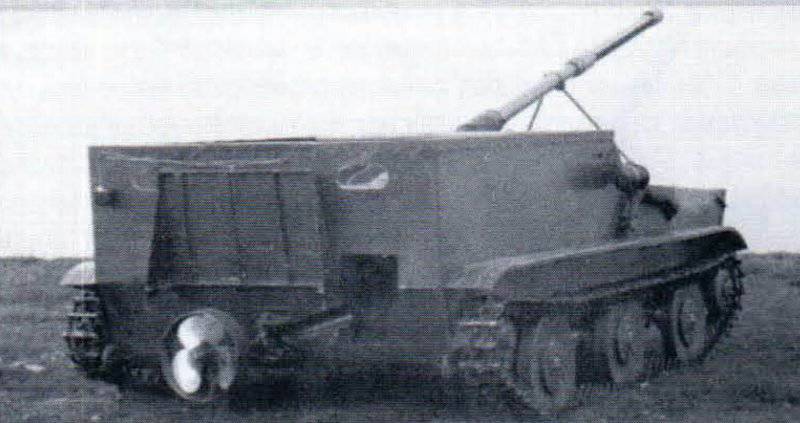 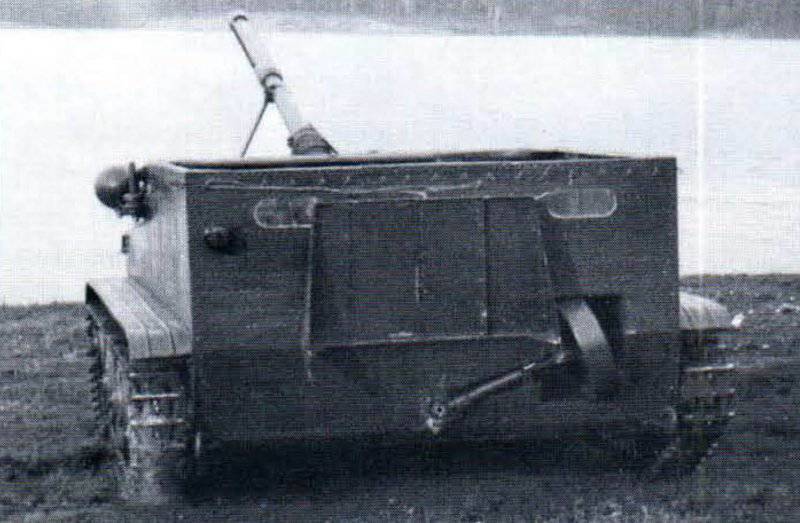 One of the prototypes of self-propelled installation K-73. The rotary shield of the propeller mounted on the rear wall of the hull is clearly visible.

A.F. Kravtsev demonstrates the capabilities of the K-73 prototype to overcome water obstacles.[Center] 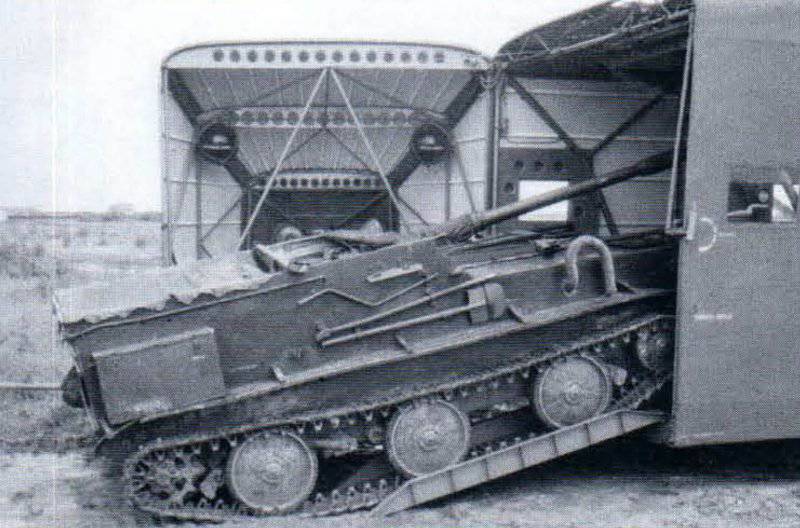 Tests showed that the self-propelled installation of the ACS-57P design OKB IC significantly exceeded the existing counterpart, and the creators naturally expected to win - the adoption of the machine. However, these hopes did not come true. By a decree of the USSR Council of Ministers (probably by a decision of the USSR Council of Ministers from 12.09.1951 or from 16.09.1953), it was decided to transfer all design documentation and prototype to Plant No. 40 - to the Design Bureau of the Moscow Mechanical Plant. Astrov. Since September, 1951 has been working there on a floating modification of a self-propelled unit ASU-57. The first prototype of a floating ACS "Object 574" (or ACS-57P) was built in November 1952.

One of the prototypes K-73 was transferred to the Militaryhistorical Museum of armored vehicles and equipment (n. Kubinka), where you can see it today. 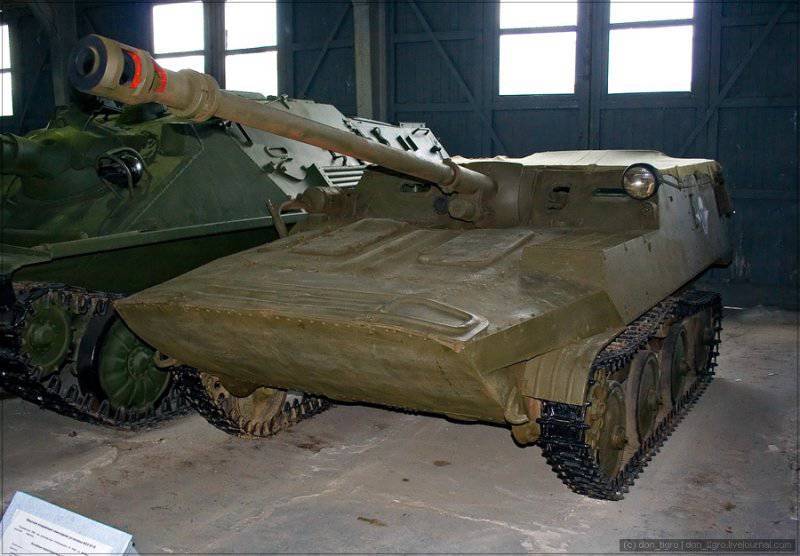 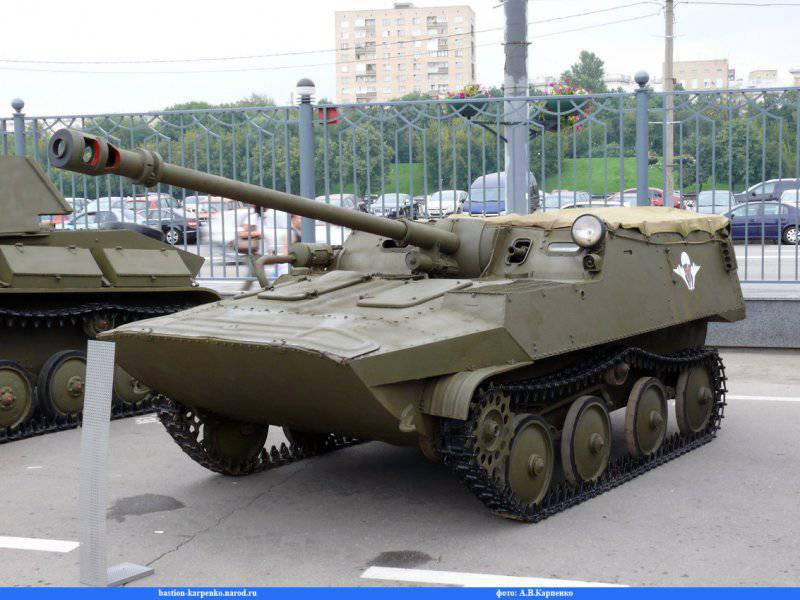