February 28 2013
6
The experience of the Great Patriotic War clearly showed that the troops needed armored personnel carriers capable of delivering infantry units to the battlefield, providing protection from bullets and shrapnel and possessing high mobility. During the war and after the end of the war, the Soviet Army was armed only with American armored personnel carriers, obtained under a lend-lease and well-established in service. Not left without attention and the German experience in using such machines.

Armored K-75 in the original configuration. Over the troop compartment installed awning

Immediately after the creation in 1947 of the Design Bureau of Engineeringtank equipment as part of the Central Design Institute D.M. Karbyshev (later - OKB Engineering Committee of SA, or OKB IW) under the leadership of A.F. Kravtseva was designed a number of combat tracked amphibians - the K-75 armored personnel carrier, the K-73 self-propelled ammunition (ASU-57P), the K-90 amphibious tank and the K-78 armored personnel carrier. These works went almost simultaneously with the creation of the K-50, K-61 and IK-71.

When developing new samples of armored vehicles A.F. Kravtsev very useful experience gained during the operation and improvement of armored and automotive vehicles in OKDVA. In the Far East, special difficulties arose during the restoration of equipment — the lack of special, often short-lived, tank units and assemblies. Therefore, A.F. Kravtsev and his designers tried to make extensive use of components and assemblies already mastered by the domestic automotive and tractor industry, tested in operation and produced in large quantities. Much attention was paid to cheapness and simplicity of design, as well as ease of operation.

The design of the tracked armored personnel carrier of the open type K-75 was widely used units and units of artillery tractor M-2, as well as trucks. 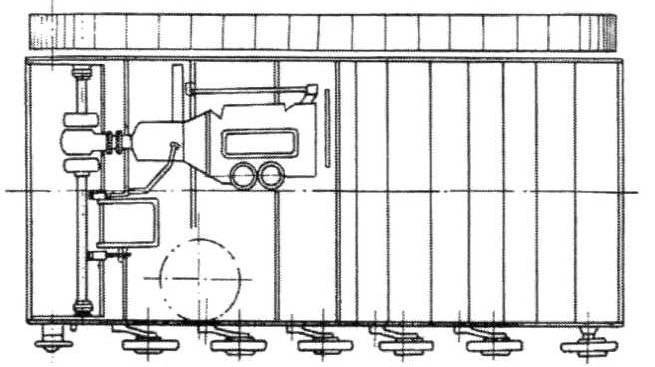 Armored K-75 in the original configuration. Removable mounts on the sides of the hull are clearly visible.

A prototype of an armored personnel carrier was manufactured at 1949 at the Military Repair Plant No. 2 GBTU (Moscow) according to the design documentation of the Design Bureau of the CA Engineering Committee, developed in accordance with the TTT approved by 31 in December 1948 by Marshal of the Engineering Troops MP Vorobiev.

The K-75 case was made waterproof, which enabled it to float and cross the river with the help of additional traction (motorization tools, poles, oars, and a rope).

The armored personnel carrier was divided into three sections: the engine-transmission (MTO), control and amphibious. 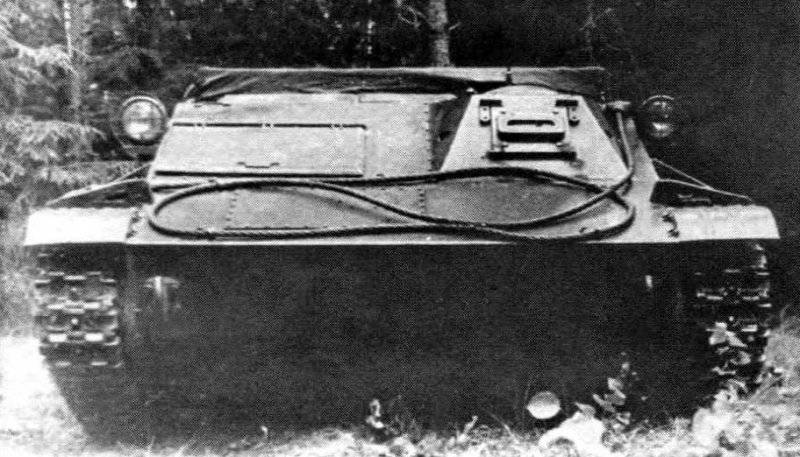 The K-75 armored personnel carrier in the initial configuration 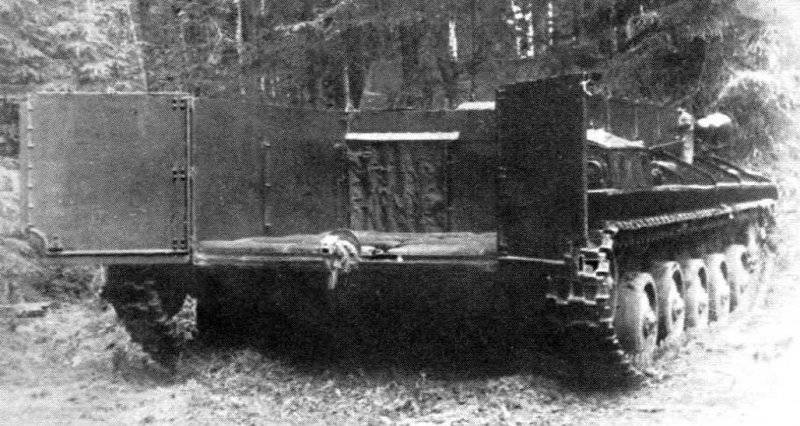 K-75. View of the troop compartment. For the landing of personnel served two doors in the aft hull sheet

MTO, located in the forward part of the hull at the starboard side, housed the engine, its systems and transmission units. A two-stroke, four-cylinder, uncompressed diesel YaAZ-204B liquid cooling hp with an 140 power was installed on an armored personnel carrier. (according to the factory) [1], borrowed from the tractor M-2. The power supply system consisted of two fuel tanks (located along the starboard side of the MTO), distribution valves, a manual fuel priming pump, coarse and fine filters, a fuel injection pump and pumps — engine injectors. The total capacity of the fuel tanks was 220 l. The air supply was carried out through two inertial-oil air cleaners connected in series with a multicyclone type filter. The cooling system included a radiator, a centrifugal pump, a twelve blade fan, a thermostat, a tank with a steam-air valve and a pipeline.

The transmission of the armored personnel carrier consisted of the following units: dry single-disc clutch of a YAZ-200 truck; three-way five-speed (with one reverse gear) gear YAAZ-200; the main gear, which is a pair of bevel gears with a gear ratio of 1,07; onboard multidisk friction clutches of dry friction with single-acting tape brakes and final drives. The connection of the drive shaft of the main transmission with the secondary shaft of the gearbox was carried out using a gear coupling.

At the ends of the main drive shaft, there were side clutches with band brakes, which were the mechanisms controlling the armored personnel carrier. They were controlled with the help of levers and a system of thrusters so that when the levers were turned off, the friction was first switched off and then the brake was applied. 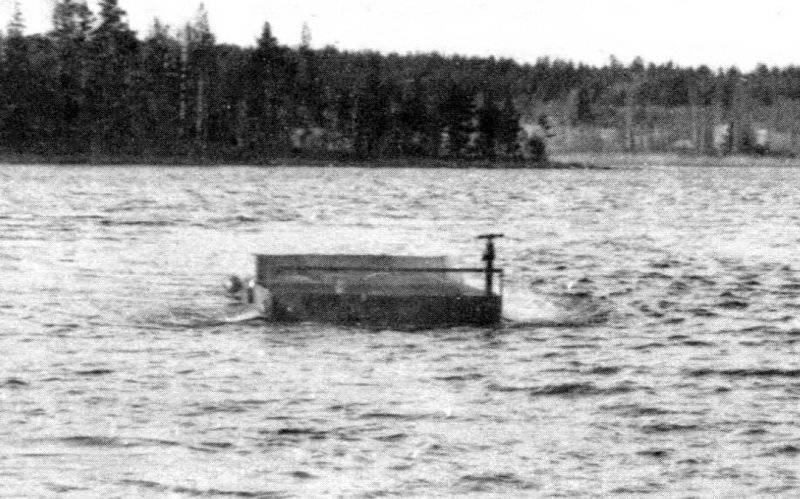 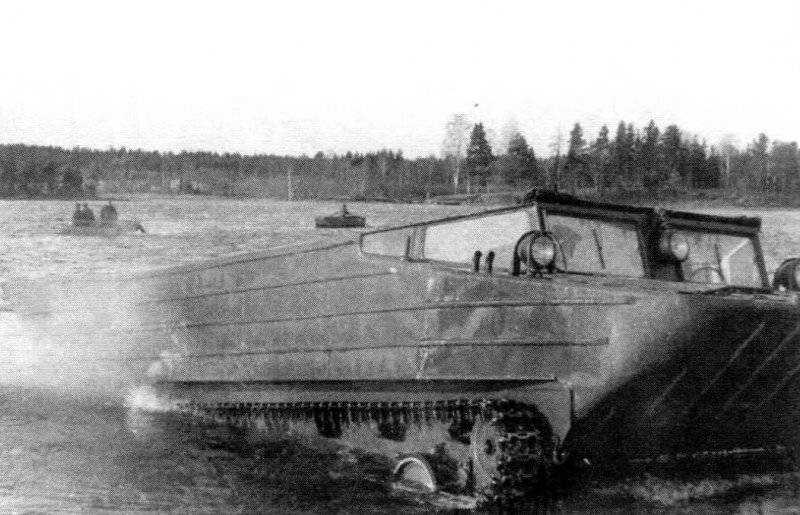 Transporter K-61 comes to shore with K-75 in tow

The drive gear was connected to the axle shaft through gear couplings, and the driven gear was seated on one shaft with the drive wheel of the track.

There was an armored roof * with two hatches, which were closed with armored covers, over the control compartment and the MTO.

In the compartment, located in the forward part of the hull at the left side, were located the driver’s and radio operator’s hands, a viewing hatch, surveillance devices, control drives, instrumentation, batteries, a radio station, and ammunition for the machine gun.

The troop compartment provided for the deployment of an assault force in the number of 16 — 20 people or loads of 2 tonnes. For the paratroopers there were crossbars with soft seats, which were removed during the carriage of goods. The dismounting of motorized infantrymen and their landing in the K-75 armored personnel carrier were carried out through the housing opened from above and the aft door. To protect personnel from the effects of precipitation on the troop compartment could be mounted awning. 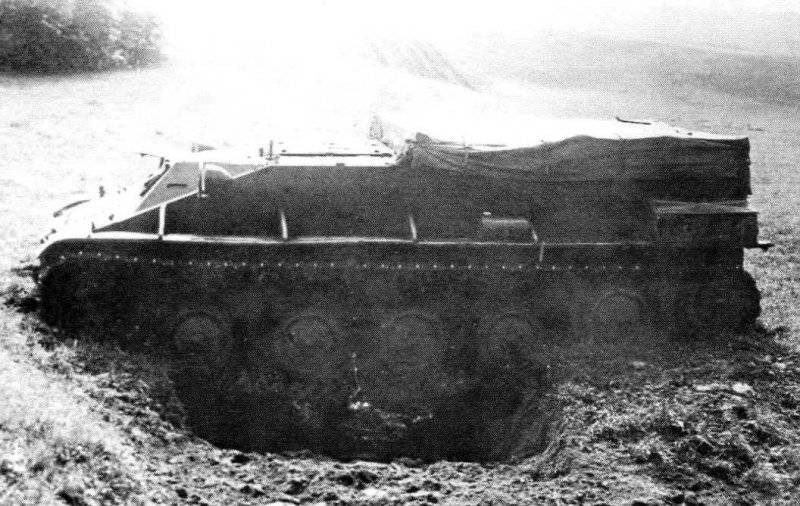 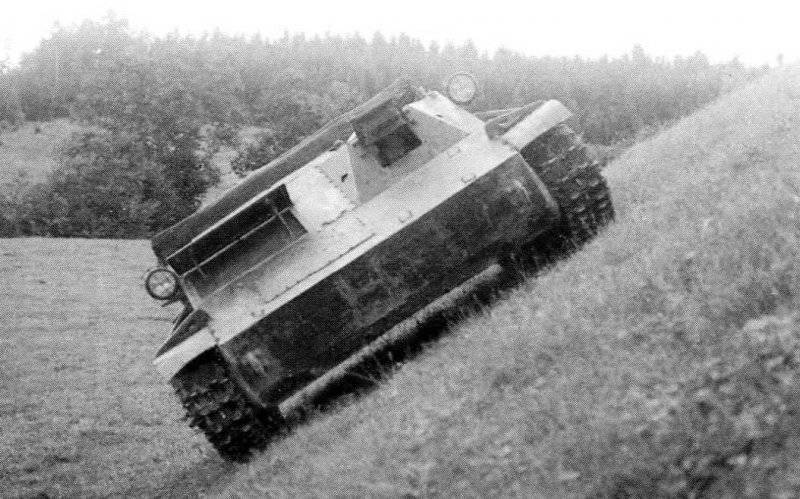 Movement on the slope 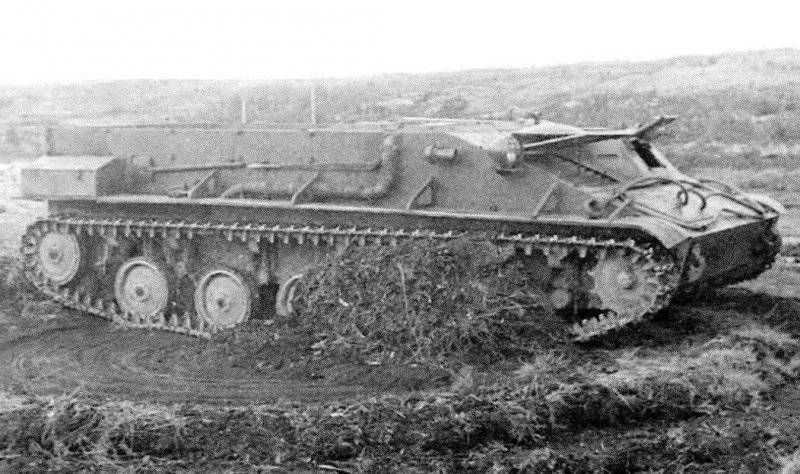 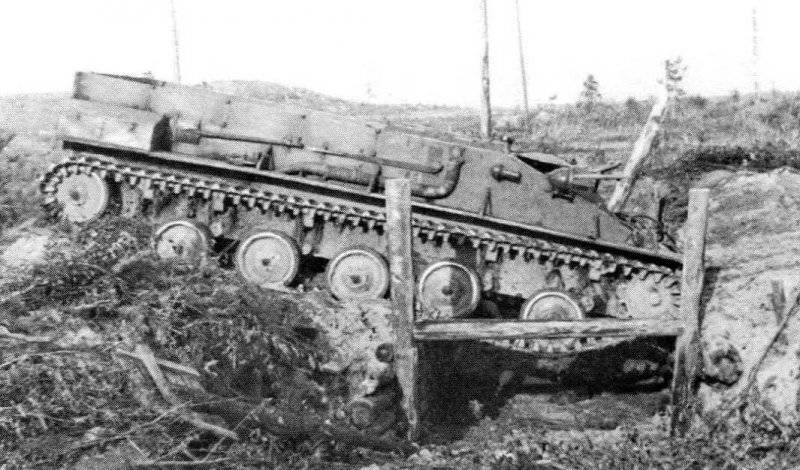 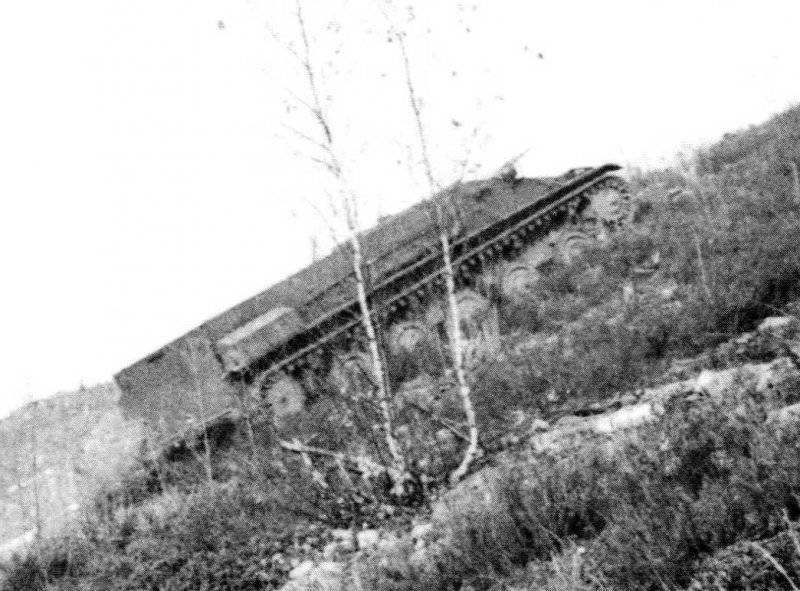 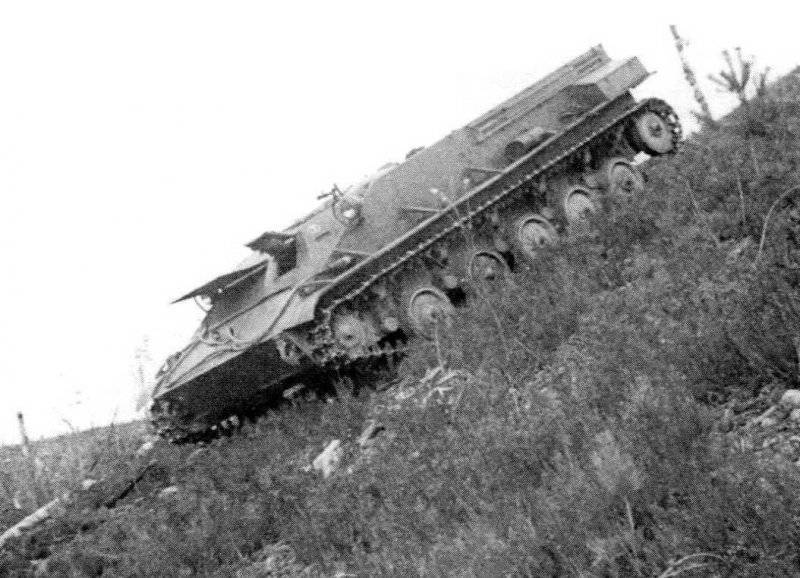 Descent from 38 'lifting with 2 cargo 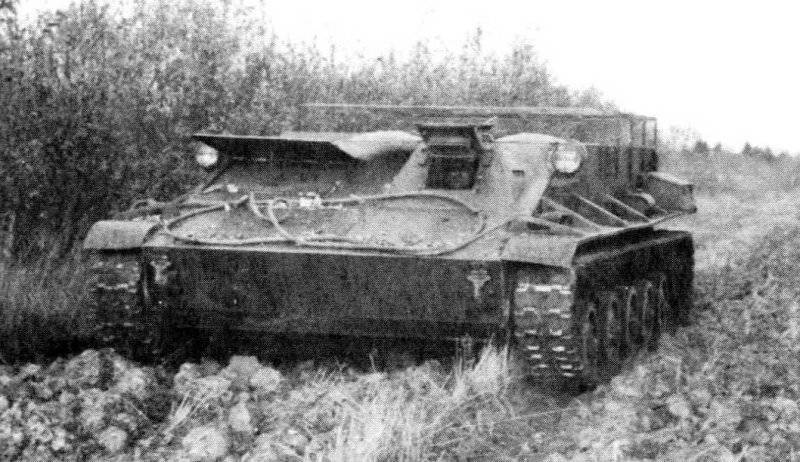 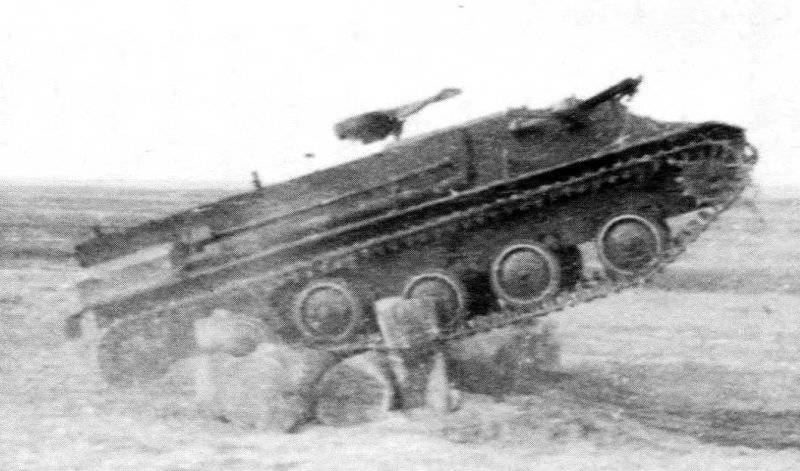 The basic one weapons The armored personnel carrier was an 7,62-mm machine gun SG (SG-43), which was installed in the slots that were available on the body of the machine and provided all-round fire. The main location of the machine gun was the swivel of the standard field machine arr. 1943 d. A basket for a box with a tape was attached to the right of the swivel, and the sleeve case to the left, to which the sleeve was attached to the bottom. Ammunition machine gun was 1000 ammunition, equipped with four tapes. In addition, the X-NUMX F-12 grenades were deployed in the armored personnel carrier in two structures (six each). 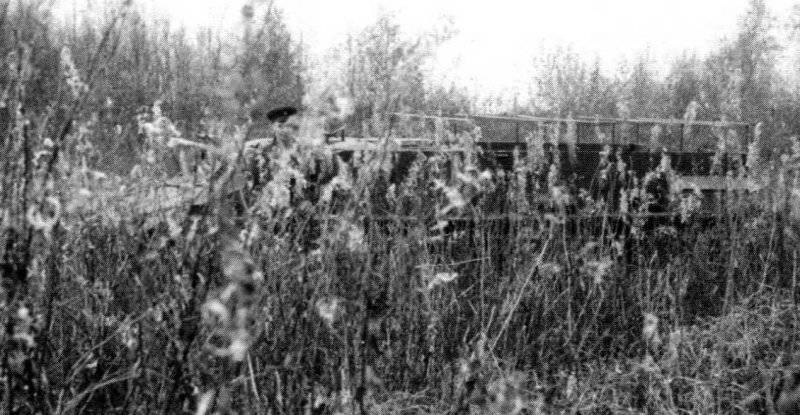 The low height (1,5 m) facilitated the K-75 camouflage on the ground

The undercarriage of the K-75 armored personnel carrier included drive wheels with cast gear rims, track chains consisting of 95 small-track tracks 300 mm wide. The tracks were connected to each other with floating fingers that worked without lubrication. The upper branches of the track chains were supported by guide runners. The tension of the track chain was carried out by turning the crank of the steering wheel (idler). The sloth roller was interchangeable with the support rollers and mounted on the crank pin. The armored personnel carrier had ten welded road wheels with rubber-coated rims, five on each side. Rear track rollers were additionally supported by shock absorbers from the ZIS-154 bus. Torsion bar suspension consisted of torsion shafts and their brackets.

The car used single-wire wiring (with the exception of emergency lighting devices). The rated voltage in the network was 12 B. The electrical equipment of the machine included the 6-CT-128 rechargeable batteries, the G-500 electric generator and the starter CT-25.

For radio communications, the BTR K-75 was equipped with a radio station 10РТ-12. 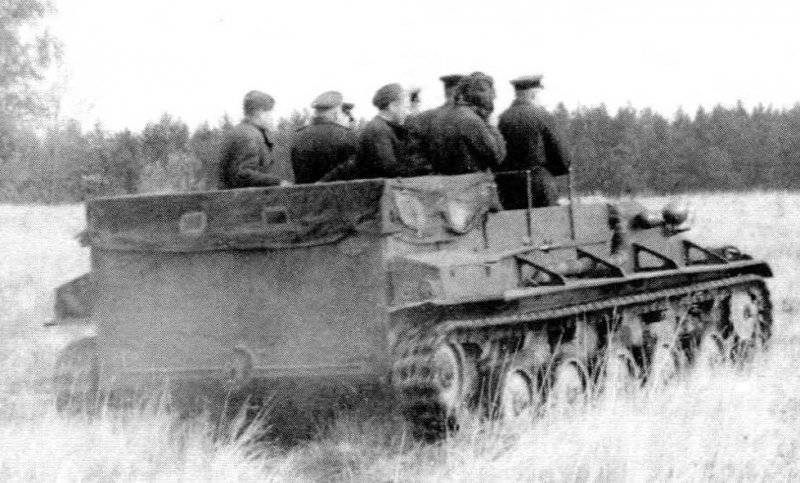 In the period from 9 to 28 September 1950 (in accordance with the order of the USSR Minister of War No. 00172 from 19 August 1950), comparative factory tests of a K-75 armored transporter prototype took place in the area of ​​the town of Brovo-ry, Kiev region. They were held according to the program approved by the Deputy Minister of War Marshal of the Soviet Union V.D. Sokolovsky and Minister of Transport Engineering Yu.E. Maksarev. The Testing Commission was headed by Colonel-General Tank Troops P.P. Poluboyarov. OKB IKSA was represented by engineer-colonel A.F. Kravtsev.

The purpose of the test was to determine the compliance of the tactical-technical characteristics of the prototype with the specified requirements, the reliability of all mechanisms, ease of maintenance and repair of units and components in field conditions by the crew, the deployment of troops and other military goods, as well as maintenance of the machine gun and sighting devices.

During the tests, the prototype of the K-75 armored personnel carrier passed 1997 km, and the mileage at night was 796 km. 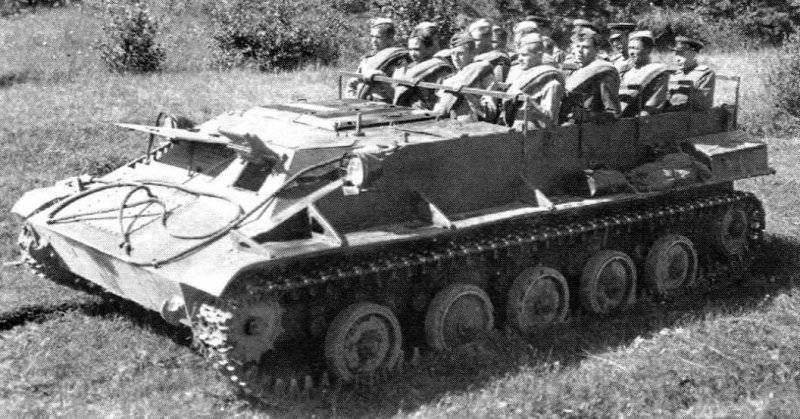 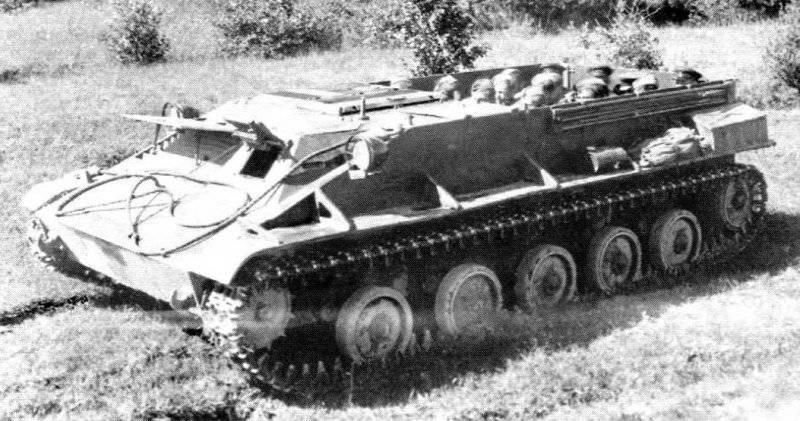 At the same time, the prototype had a number of design flaws, the main of which were:
- Insufficient speed on cobbled roads and dirt roads;
- insufficient power density;
- insufficient capacity of the troop compartment.

The K-75 armored personnel carrier in the final configuration with weapons. Xnumx

According to the commission, due to the presence of these shortcomings, the K-75 armored personnel carrier in its current form cannot be adopted by the Soviet Army.

One of the important conclusions from the results of testing a prototype K-75 was that it was confirmed that it was possible to create an easy-to-build, cheap and mass-produced, reliable-to-operate tracked armored personnel carrier using the automotive industry.

Therefore, given the importance of developing such a machine and adopting it, the commission recommended that two advanced prototypes of the K-75 tracked armored personnel carrier be manufactured with the following basic requirements:
- increase the maximum and average speeds;
- increase the capacity of the troop compartment to 24 people;
- ensuring the convenience of placing the landing and its weapons.
- increase in reliability of an armored personnel carrier — with a warranty period of service up to 3000 km:
- the possibility of self-crossing through water barriers with the help of simplified water propulsion. 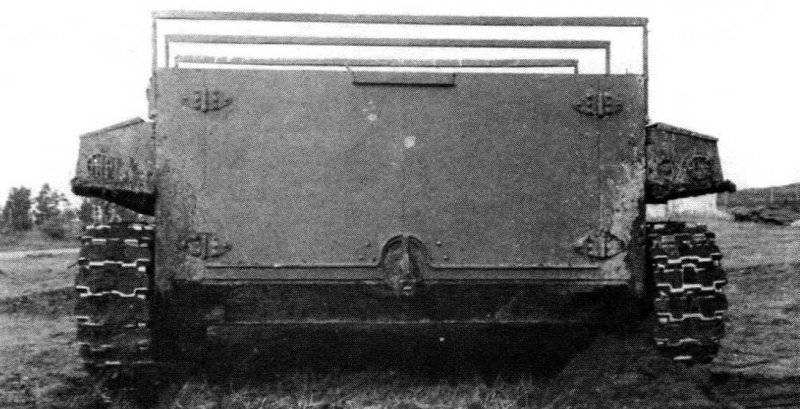 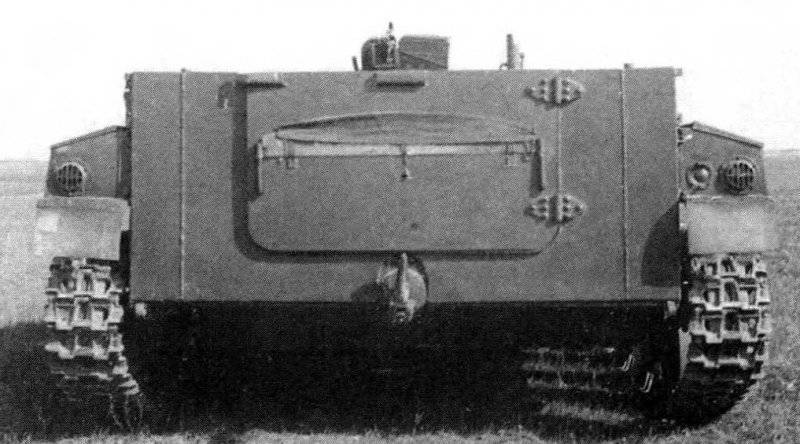 During the finalization of K-75, according to the test results, the design of the stern body armor sheet was changed. Instead of two doors for landing personnel entered one

However, for unknown reasons, the construction of two modified samples of the armored car did not take place. But the experience gained by the K-75 developers was not in vain. It was used in subsequent machines created at the Design Bureau of the CA Engineering Committee under the direction of A.F. Kravtsev.

Subsequently, the caterpillar armored personnel carrier K-75 was transferred to the Militaryhistorical Museum of armored weapons and equipment (n. Kubinka), where it is currently stored.

Characteristics of an experienced K-75 BTR

Ctrl Enter
Noticed a mistake Highlight text and press. Ctrl + Enter
We are
Heavy armored personnel carrier BTR-TFamily BTR-60 / 70 / 80 in combat
6 comments
Information
Dear reader, to leave comments on the publication, you must to register.