February 6 2013
77
The Dragunov sniper rifle has been in service since 1963, and, apparently, they are not going to change it for something else. Although it is weapon already quite old, it still copes with the tasks that it faces, although many hold the view that this weapon is already outdated and it needs to be urgently changed. Let's try to figure out if this model of the rifle is outdated and whether it is worth looking for a replacement for it, provided that there are more relevant gaps in the weapons of both the army and the police. At the same time, let's take a brief look at the design of this weapon, since for many it turned out to be unknown in its design.

In the late fifties, namely in 1958, the Main Rocket and Artillery Directorate formulated for designers the task of creating a new self-loading sniper rifle for the Soviet Army. Such famous designers as Kalashnikov, Barinov, Konstantinov and, of course, Dragunov participated in the competition. The weapons of other designers will be discussed in separate articles, especially since the samples were presented quite interesting. For the sniper rifle, in the usual understanding of most people, the basic requirements that were set before the designers were not entirely clear. So, the weapon was required to be able to confidently fire at the enemy only at a distance of 600 meters, that is, at this distance the enemy should be guaranteed to be hit from this weapon. But now it is fashionable to talk about weapons, which shoots 1000 meters and beyond, while usually forgetting that the distance for accurate fire in battle, even in open areas for a sniper who works as part of a unit, is much smaller. In other words, he has completely different tasks, or rather their implementation, in comparison with those of the sniper calculation, which works separately. Naturally, for a sniper who needs to hit a target at a distance of one and a half thousand meters, the SVD will be a completely inappropriate weapon, but these snipers will not be armed with such rifles. Consequently, the SVD copes with its tasks, and given the unpretentiousness of the weapon to the operating conditions, ease of maintenance, and well-established production, it does not make sense to change these weapons.

For example, you can look at those sniper rifles that are currently in service in other armies of other countries. In spite of the fact that more accurate and long-range samples are taken into service, no one is in a hurry to refuse weapons that are similar in characteristics to SVD, and it quite peacefully gets on with long-range and accurate samples. Of course, I would like to see a more advanced weapon, with higher characteristics, light and compact, but no one will allocate funds to remove the rifle from service and replace it with another model one day. And this problem is not so acute as to make noise around it. It would be more reasonable to work with weapons ammunition, in order to increase its armor-piercing properties, it is cheaper and more relevant at the moment, and only after that do weapons based on it.

What exactly is a SVD? This is a self-loading rifle, the automation of which is based on the use of powder gases discharged from the bore of the weapon and with the barrel bore locked when the bolt is turned to 3 combat stops. The weapon is powered from a detachable box magazine with a capacity of 10 7,62x54R cartridges. The weight of a weapon without ammunition is 3,8 kilograms with a total length of millimeters 1220 rifle. Barrel length - 620 millimeters. Quite often, the design of a rifle is compared with the design of a Kalashnikov assault rifle, however, despite the same basic points, this weapon has its own characteristics.

First of all, it should be noted that the gas piston is not rigidly connected to the slide frame, which reduces the overall weight of the moving parts of the weapon when firing. In addition, the barrel bore locks into three lugs (one of which is a rammer), while turning the bolt counterclockwise. The trigger mechanism of the gun type, assembled in one case. The weapon's guard is controlled by a fairly large lever on the right side of the rifle. In the on position, the fuse blocks the trigger, as well as limits the movement of the bolt carrier back, which provides protection from external contamination during transportation. The rifle flame arrester also plays the role of a muzzle brake-recoil compensator, although it is difficult to give an example when this is not the case. The flame arrester has five slit slots. The forend and weapon butt was previously made of wood, now of plastic. On the butt is set unregulated support for the cheeks arrow.

The Dragunov sniper rifle has both open sights and a seat for various sights. In addition to the telescopic sight, various night sights can be mounted on the weapon; with such an aim, the SVD is converted into SVDN. In case of failure of the optical sight, the shooter can continue to perform their tasks with the help of open sights, which consist of an adjustable rear sight installed in front of the receiver cover, and a front sight in the earphone.

Let us briefly describe how this whole thing works. When fired, the powder gases push the bullet through the barrel bore forward, reaching the hole in the barrel, to remove the powder gases, they get into the gas engine and push the piston back. After accelerating the bolt carrier, the piston stops. The frame, in the course of its movement back, turns the bolt that unlocks the barrel bore, extracts and throws out the cartridge case. Actually, in this way, quite simply and without any supernatural nuances, quite satisfactory performance of firing is achieved. 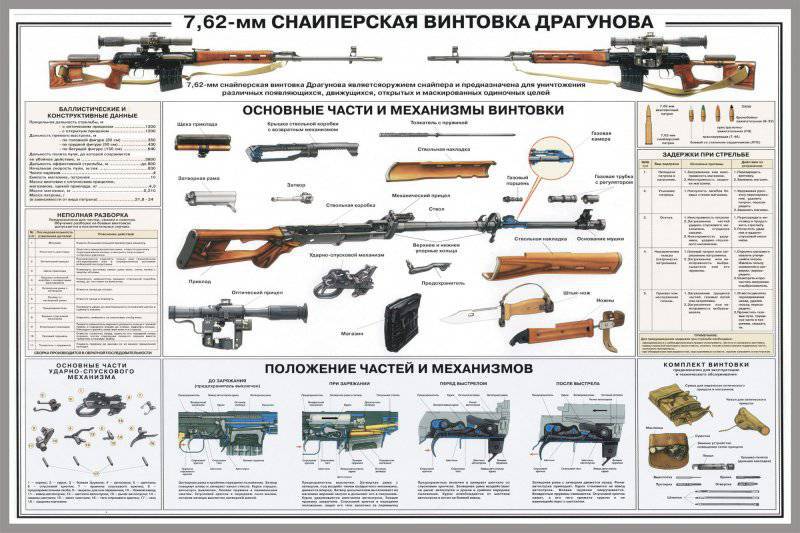 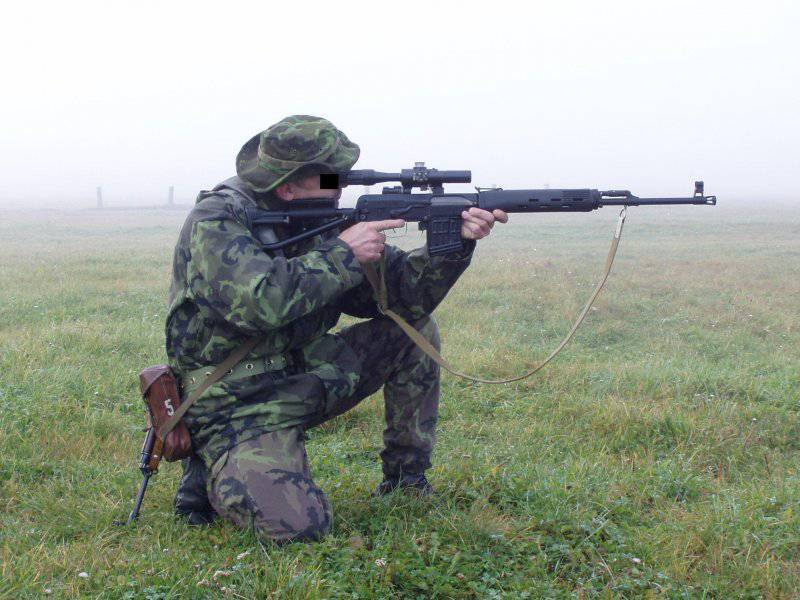 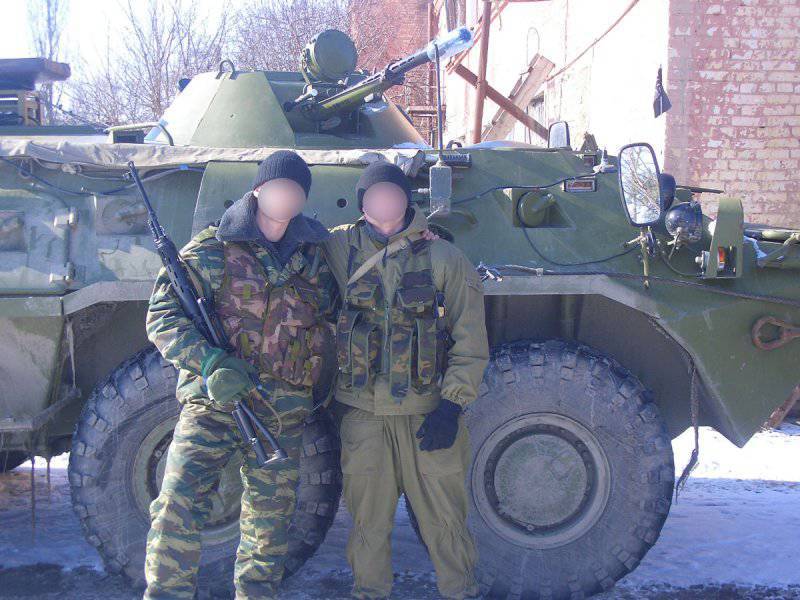 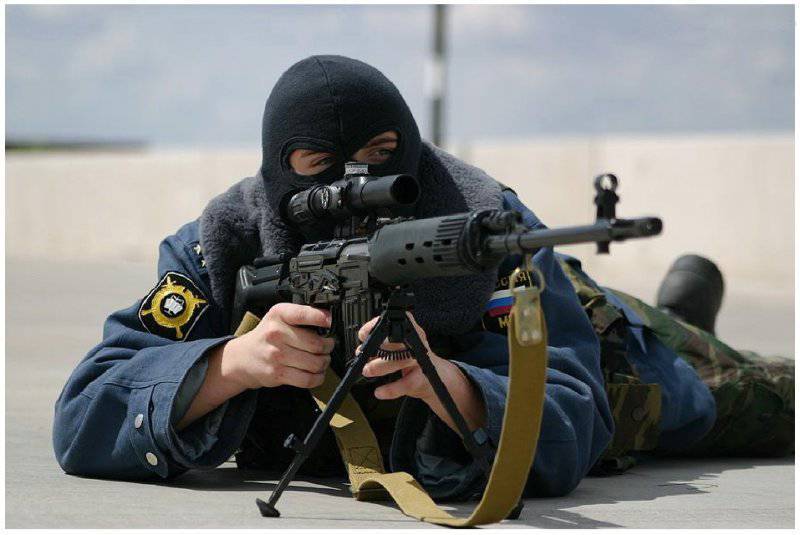 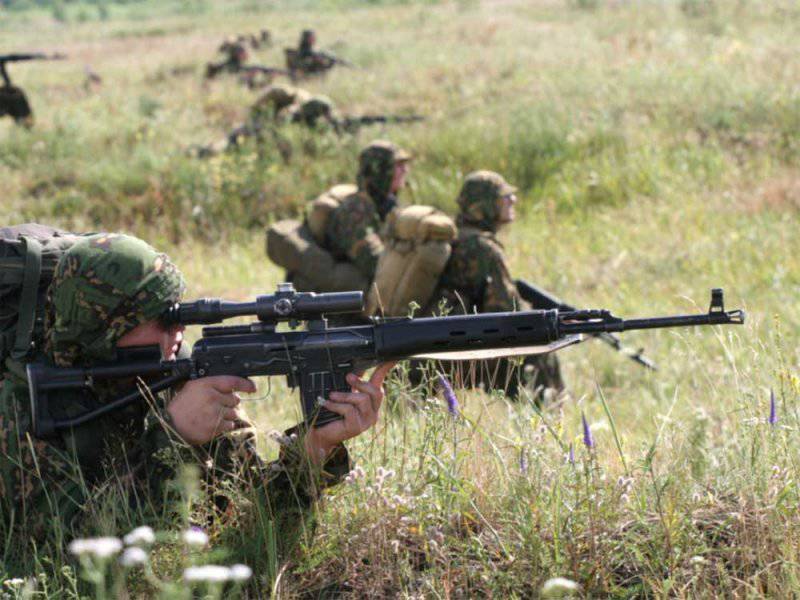 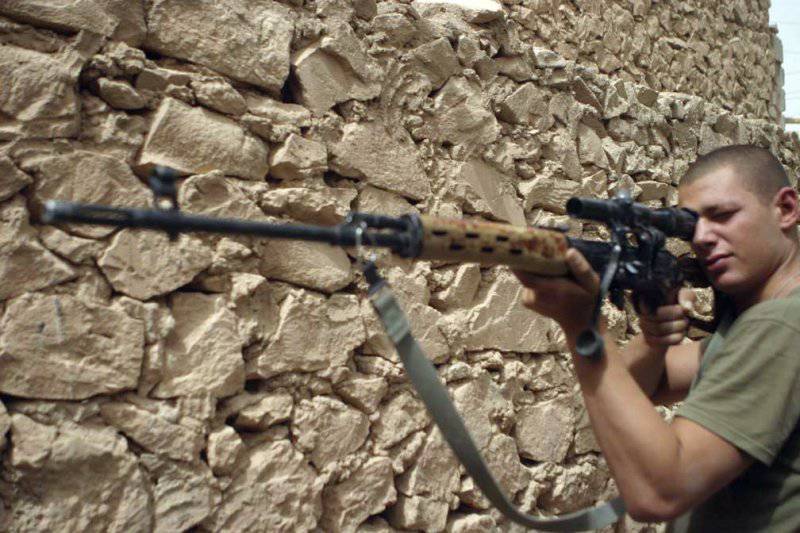 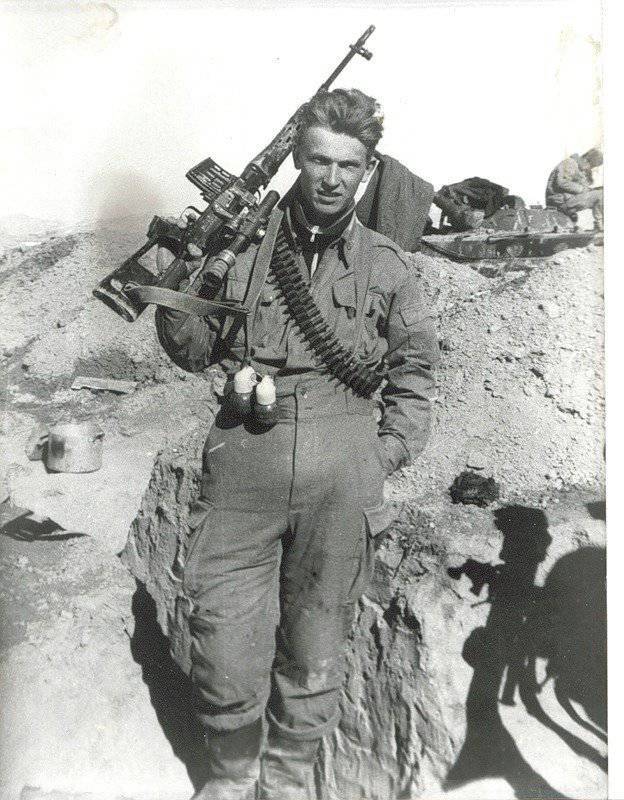 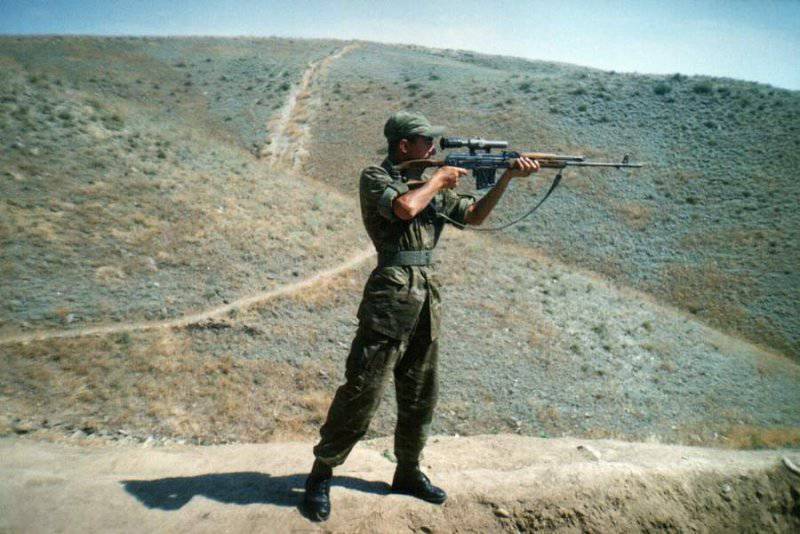 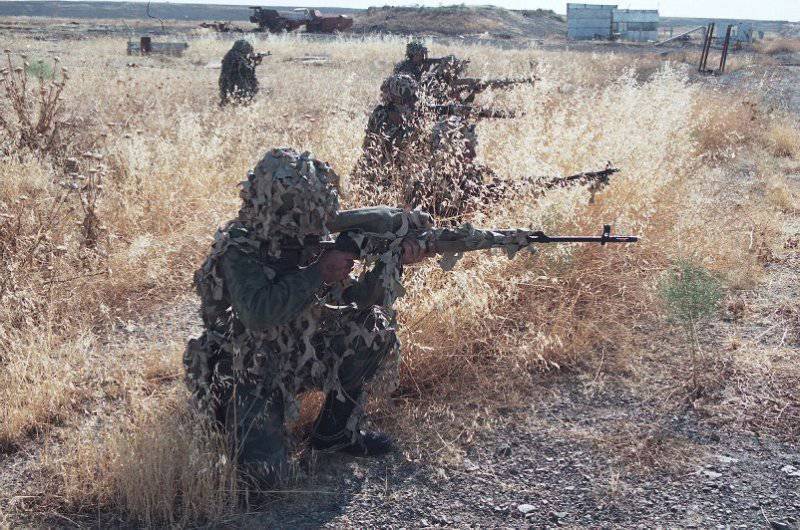 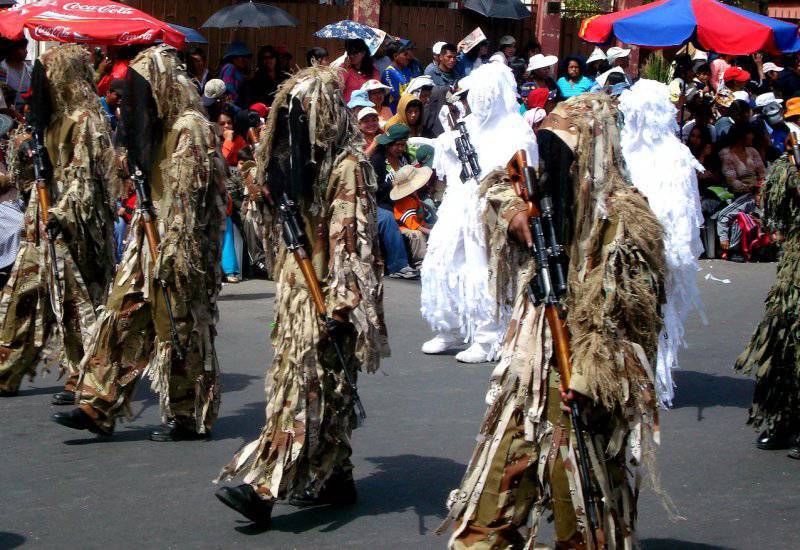 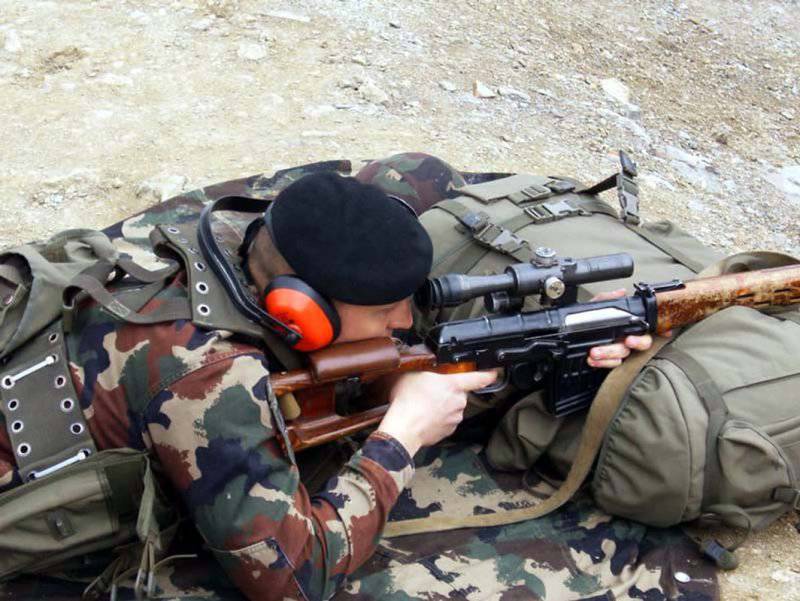 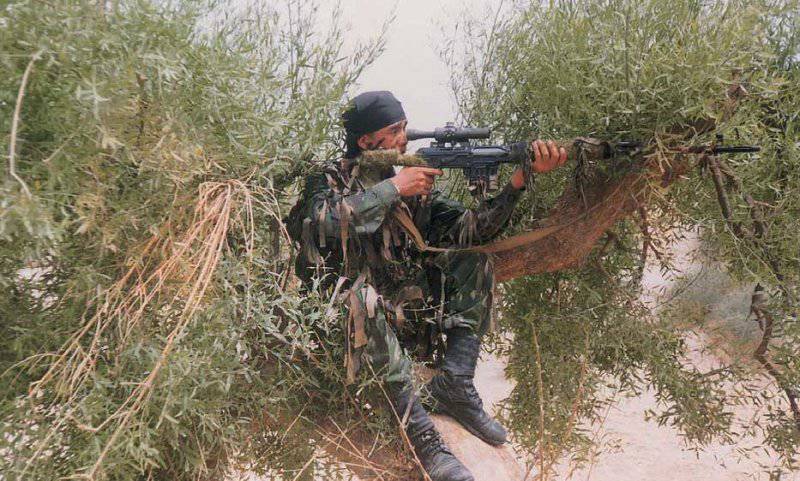 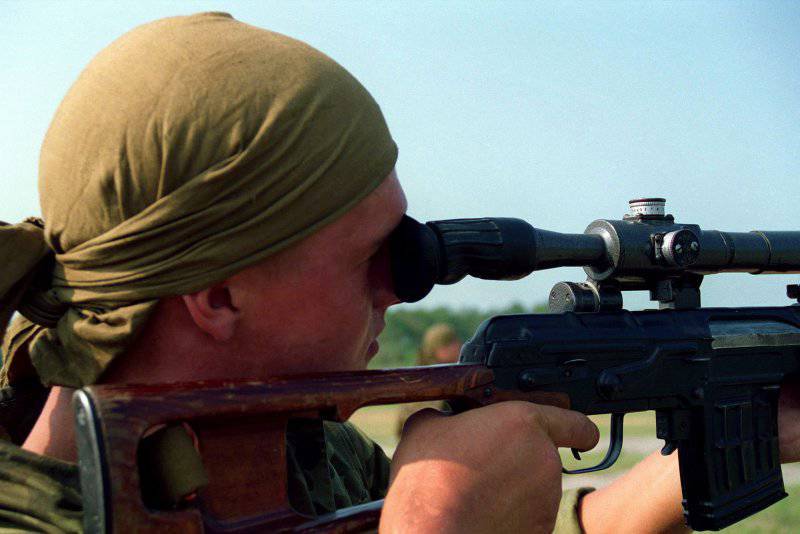 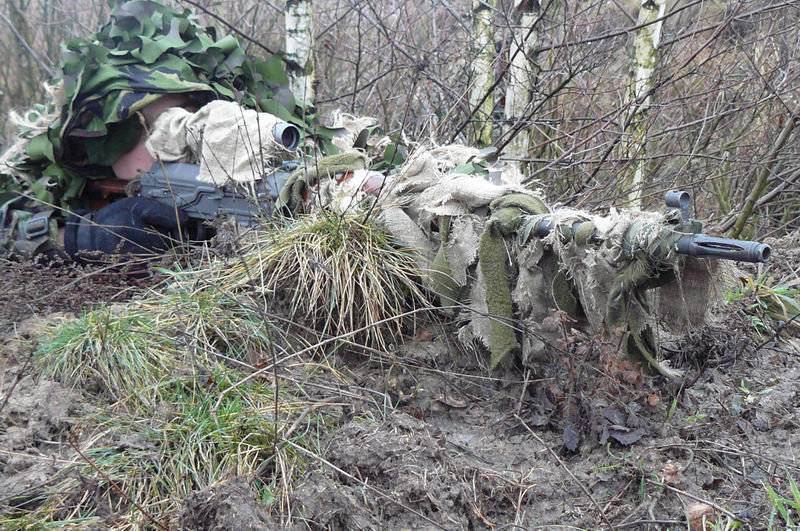 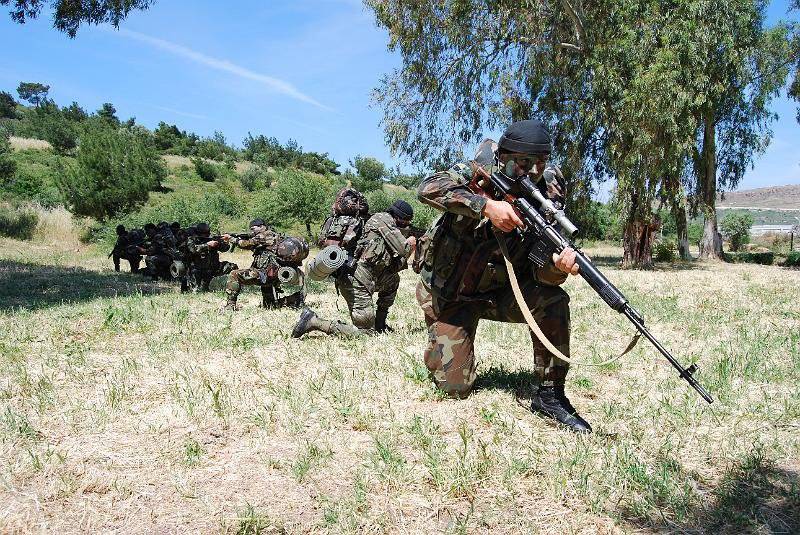 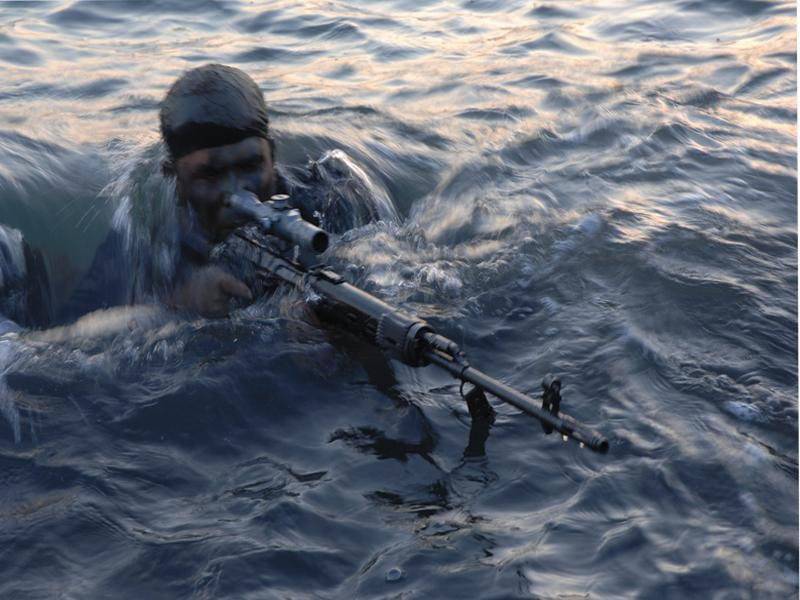 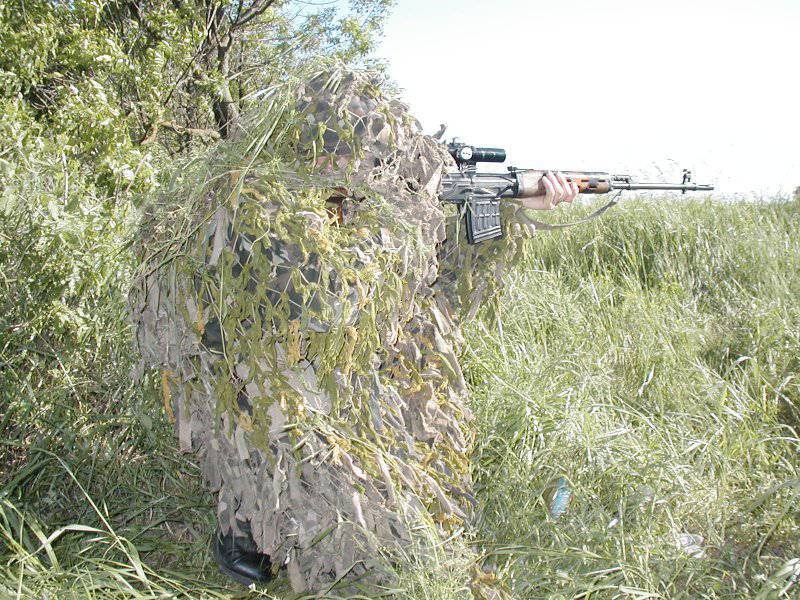 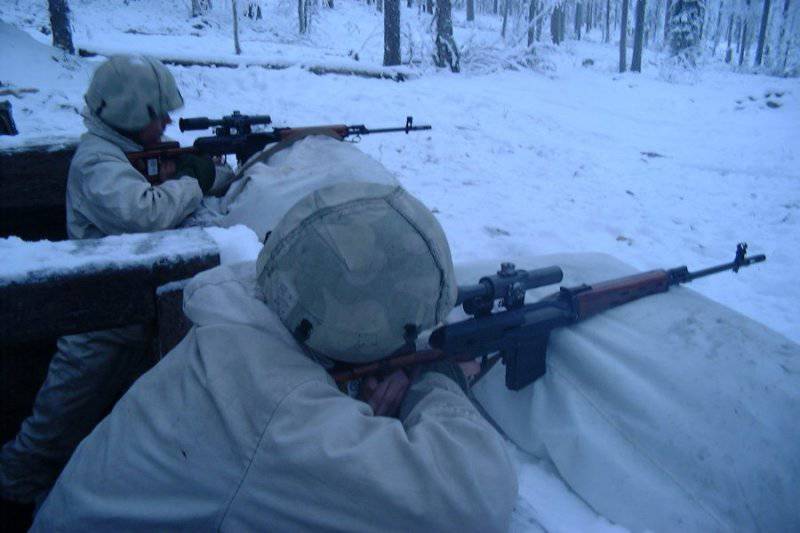 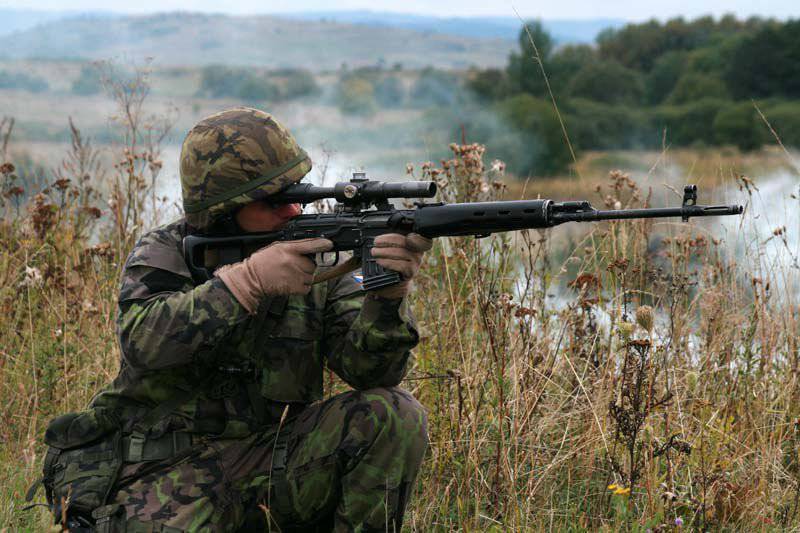 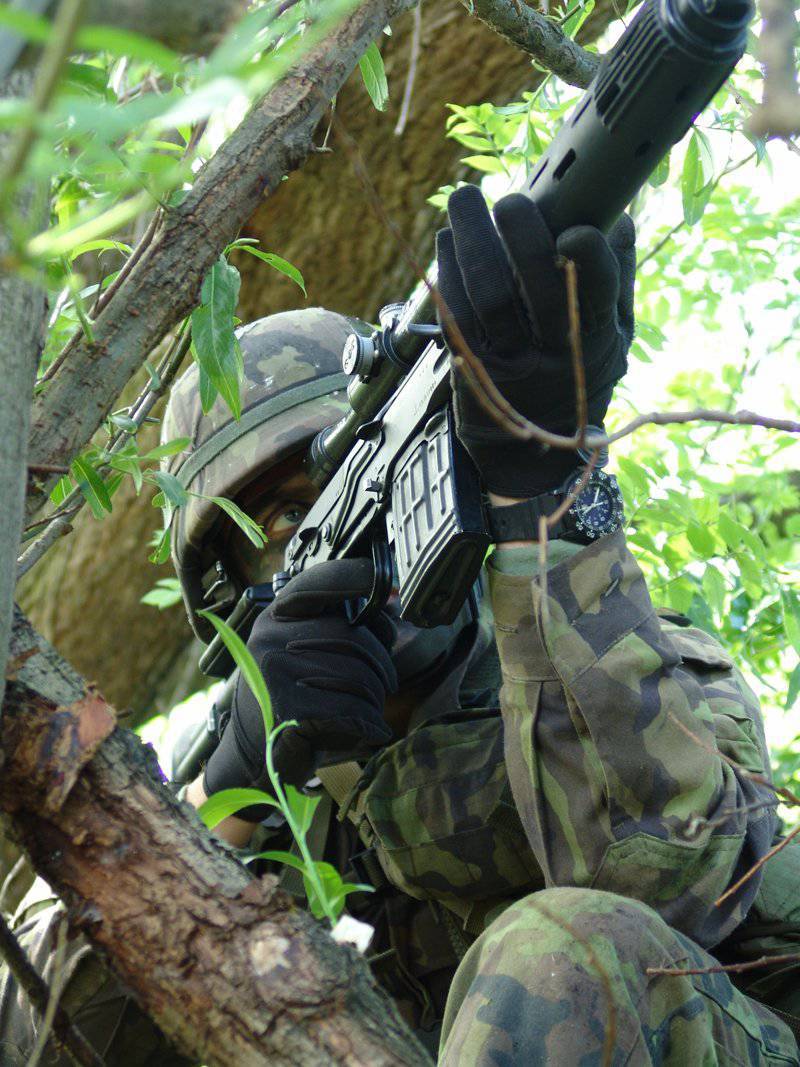 SIDS of the Czech Republic 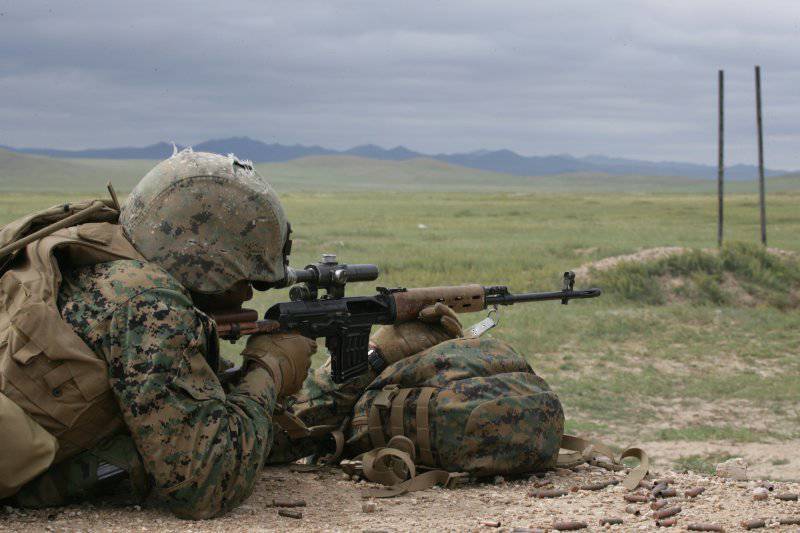 During the joint Mongol-American exercises. Mongolia 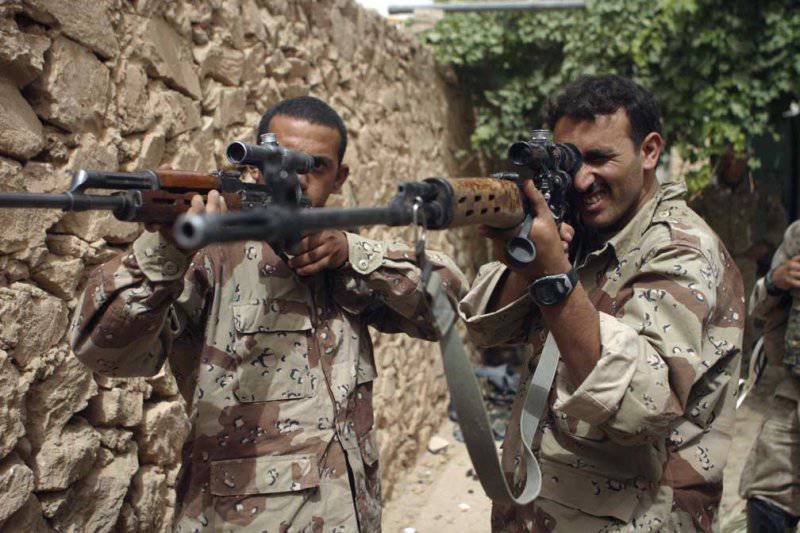 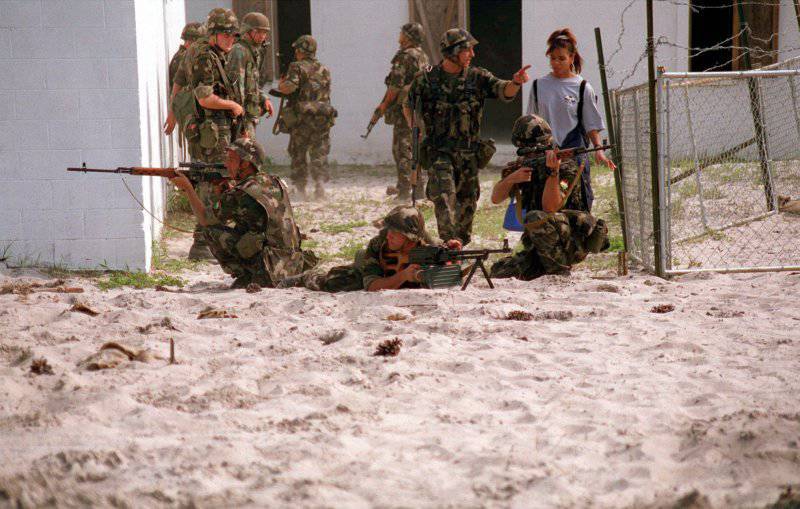 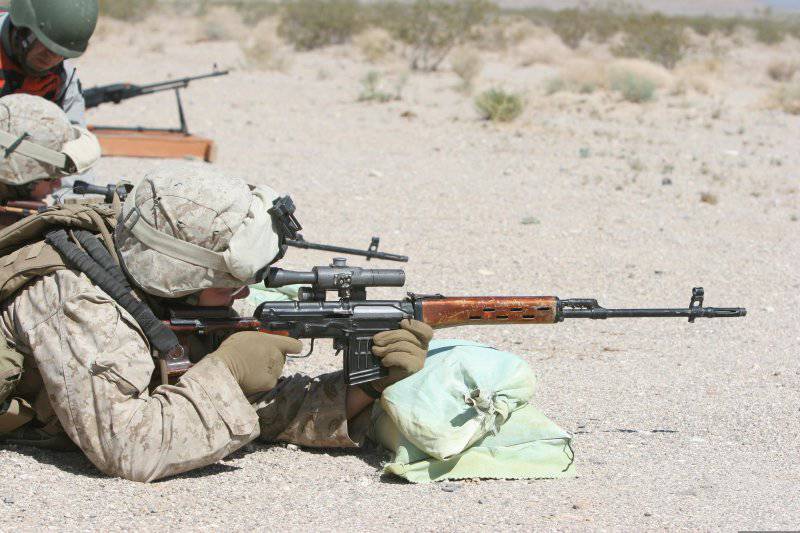 Ctrl Enter
Noticed oshЫbku Highlight text and press. Ctrl + Enter
We are
Sniper fire in local warsWhat should be a modern sniper (part of 1)
Military Reviewin Yandex News
Military Reviewin Google News
77 comments
Information
Dear reader, to leave comments on the publication, you must sign in.