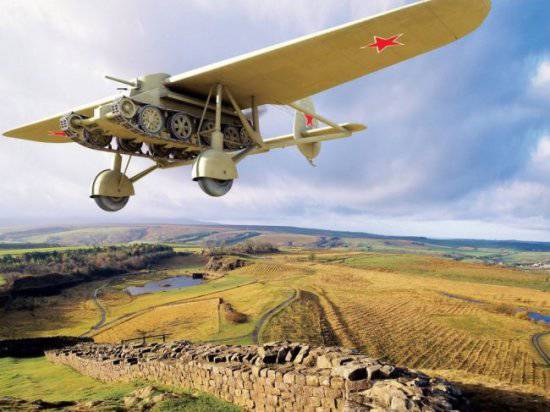 The essence of the matter is as follows. Some of our ranks came up with the idea of ​​equipping at least some partisan detachments and sabotage groups with armored vehicles. But how does she get over the front line? They suggested thinking about this to our famous aircraft designer O.K. Antonov. And he created an amazing design in a few evenings - for easy tank added wings, tail ...

When the avian tank hybrid was brought to one of the airfields near Moscow, it caused plenty of controversy. Skeptics believed that such a "cuttlefish", of course, fall apart even on earth ...

“But we believed the calculations,” recalls Sergey Nikolaevich Anokhin. “And it came out to them that such a structure could easily rise into the air.”

This is, in fact, the only photograph in which the “Wings of the Tank” are captured in flight. It is understandable - 1941 year after all, not to shoot.

The final judgment, of course, could be made only after flight tests.
The pilot reacted to the very process of preparing the first flight without any particular worries. He approached, climbed through the upper hatch, sat down, looked around. Yes, it was not very convenient to look at the world through a narrow viewing slot, although the designer provided for a better view a special optical device. To the usual tank equipment were also added control knob, pedals to control the rudders. There is a compass, speed indicator, altimeter on the dashboard ...

“In general, everything was tolerated,” Anokhin recalled. “Although it was awkward to sit with a parachute in a tank helmet ...”

Tests of aviatank began with runs on the ground. The pilot was taxiing the tank to the concrete strip, was towing the plane into the wake of the aircraft. Hooked the cable. Start, run ... Sparks flew from under the tracks, it seemed the tank was about to leave the ground. But the pilot of the tanker opened the lock of the cable, and one tug took off. A tank for some time still ran by inertia, and then went under its own power to the parking lot. In the distance, engineers were worried. For the bomber, they were calm. But doubts about the strength of the tracks were tormented by them. But everything worked out - the trucks withstood the increased load.

A few days later it was issued a "good" to fly. They decided to start early in the morning. Flight mission - flying in a circle, height - 1500 meters. On the second round - unhook, planning.
And aviatank at the start. Picked up cable. The commander of the towing bomber Pavel Eremeev gave the plane a little ahead, chose the slack of the cable.

Five minutes of flight is the norm. Gone first turn. Nine minutes - the norm, the second turn ...
And then the voice Eremeeva headphones:

“Everything, Seryozha, I go to the nearest airdrome and unhook it. The engines are boiling! .. "
Aviation tank was still heavy for towing.

“The height at that moment was three hundred and four hundred meters,” recalled Anokhin. - He unhooked me. I fly myself. I planned somewhere about two minutes and three, came in for a landing, sat down normally. ”

By its appearance, the aviation tank caused considerable confusion on the airfield of a foreign airfield, as the second year of the war went on. And then it is unknown where the combat vehicle comes from, and without any identifying marks ...

But the pilot got out of the cockpit, and all was well explained. The world's first flight of the aircraft tank was successfully completed.

Despite the uniqueness of the experiment, with careful study of the problem, it turns out that the design of the “flying tank” was created not only by Antonov. So, according to the aircraft engineer Konstantin Gribovsky, more battles during the First World War gave rise to many strange types of military equipment.

When the first airborne units appeared - maneuverable, capable of quickly overcoming solid distances, they would have to equip them in the rear of the enemy - not only with light but also heavy weapons, including tanks and artillery pieces. Solved this problem in many countries at once in different ways, but the analysis of the work carried out then showed that the experts went in three main areas ...

The first involved the transfer of tanks on heavy gliders. At first this idea was expressed in our country, in an organization led by the famous pilot and inventor P. Grokhovsky. In 1932, he proposed a suspension for transporting tankettes “under the belly” of an airplane. In addition, it could be dropped on a parachute with a diameter of 30 dome meters, which was placed in a separate box. Three years later, the Red Army adopted the universal NGX 12 (cargo suspension, 12 I) to the TB Z bombers. To it, it was possible to hook a X X NUMX T light tank weighing 37 tons. In flight, the tank crews were in the car, and after landing they instantly released the tank with a lever that actuated the quick-release locks.

For the first time, this method was openly demonstrated in 1935 year at maneuvers in the Kiev Special Military District. This made a strong impression on foreign military attaches ...
But the load attached “under the belly” increased the aerodynamic resistance of the aircraft of the carrier, worsening its flight characteristics. Guns, tanks and cars began to be placed in streamlined containers.