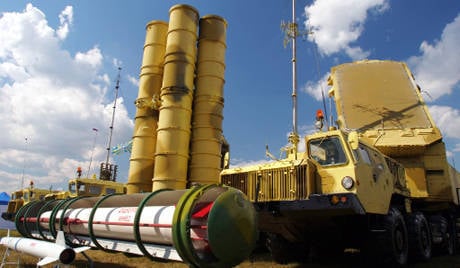 The newest air defense systems are represented by Russia at the Airshow China 2010 international aerospace show in Zhuhai, Guangdong Province, which will run from 16 to 21 in November.

The topic of the forum is extremely wide - from military and civil aircraft and helicopters to rockets and missiles. The Russian air defense concern Almaz-Antey is making its debut at this salon, company spokesman Yuri Baikov said:

"Almaz-Antey" for the first time participates in an exhibition in Zhuhai. Visitors can get information about the C-400 Triumph, C-300 PMU2 “Favorit” anti-aircraft systems, Buk M2E anti-aircraft missile systems, Tor M2E. This decision reflects a willingness to further expand business contacts and partnerships with the People’s Republic of China. The Almaz-Antea exposition presents the entire range of military products produced by the enterprises of the company. ”

The complex has already been delivered to some countries. In particular, the 15 divisions were sent to China and put on combat duty in the air defense system of the largest cities in the country - Beijing and Shanghai.

According to the World Trade Analysis Center weapons, the Russian long-range systems C-300 and C-400 are currently the most effective means of defense of important state and military control facilities, military bases, military forces and missile launch positions.

Air defense systems of medium and long range - the largest achievement of the military "high-tech". Only the USA and Russia can develop them independently, the rest of the countries do this with the assistance of American (Japan) or Russian (India) developers.

The interest of specialists and visitors of the salon in Zhuhai to the exposition of the Almaz-Antey concern is guaranteed. Concern today - one of the leaders of the military-industrial complex of Russia. It is among the 30 largest companies in the world military-industrial complex. The company's products are successfully used in more than fifty countries around the world.