The CIA and the Pentagon are awaiting new executives. Who are they?

January 10 2013
16
The American president on the eve introduced for the Senate candidacy of the new leaders of the Central Intelligence Agency and the Pentagon. Lead the CIA Barack Obama is going to put his anti-terrorism adviser John Brennan, and the head of the main military department - Chuck Hagel. Most of the Russian citizens, both of these individuals (Brennan and Hagel) are, in all likelihood, not very familiar, and to have an idea of ​​who will be at the head of the American, let's say, law enforcement agencies, it is necessary to touch upon the gentlemen promoted by Obama.


In the United States, after the outbreak of scandal with the previous CIA head David Petraeus, who held this post for less than a year and lit up his love affairs on the side, it seems that now practically any figure could be suitable for the intelligence service, which at least would be connected to the CIA or about erroneous affairs. Moreover, the CIA itself Petraeus, to put it mildly, did not evoke piety even before it turned out that it is difficult to call him a good American family man.

Immediately after the dismissal of 2011 in August from the US Armed Forces, Petraeus took the post of director of the CIA, but was clearly considered a black sheep in this department. The fact is that Petraeus is a combat general who managed to take part in numerous American companies in various positions, but his combat past among the CIA employees did not fit with the features that should be inherent to the director of management. From the very beginning, Petraeus began to experience difficulties in his new job, and in the end everything “safely” ended in a sex scandal, after which the general wrote a statement “on his own”.

At the time of the director of the CIA replaced the IO - Michael Morell, but the place was prepared for a completely different person. As it turned out recently, this man is 57-year-old John O. Brennan, who is directly related to the CIA.
It is worth recalling that at one time Brennan performed management work not only in areas remote from Washington (Saudi Arabia, Pakistan), but also directly in the District of Columbia. At the time of the CIA's management, a man like Tennett John Brennan served as chief of staff. The work of Brennan at the CIA could lead him to the top leading position of this department several times. For example, one of the "crowns" of the service of John Brennan is that it was he who made personnel proposals for the operation in Pakistan, aimed at the destruction of Osama bin Laden. However, every time Brennan was prevented from entering the highest level of the hierarchy in the Central Intelligence Agency. 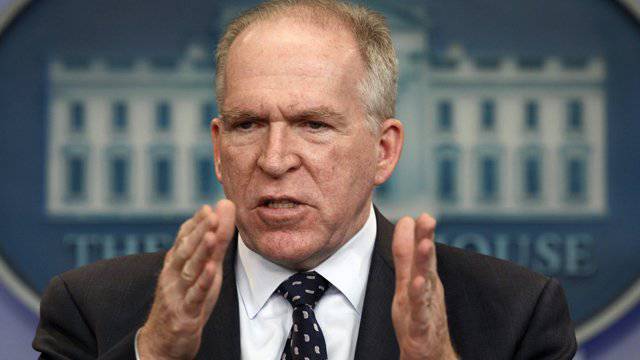 In the photo - John Brennan

One such interference was the accusation of John Brennan that it was precisely on his instructions in the CIA prisons (for example, in Guantanamo and Abu Ghraib) that torture was used against prisoners who were in places of detention without trial or investigation. sophisticated bullying by American overseers.

Initially, the CIA stated that no torture was carried out in the same Guantanamo, but then, when personnel captured on the cell phone camera of the same prison employees appeared in wide access, the managers had to admit that "there was a case." Only now Brennan persistently insists that all these obscene actions with prisoners were carried out exclusively behind him, and he has nothing to do with torturing people. The words “was done behind the back” and “does not have a relationship” unwittingly transfer us to today's Russian reality related to sensational episodes in one notorious domestic ministry ... It is obvious that in the USA they also do not disdain to use “our” methods: my hut is still on the edge ... "

Another unflattering side of John Brennan’s activities at various CIA posts is that he was the one who oversaw the drone aviation on “doubtful” objects for the USA in third countries, and even on “doubtful” citizens of the USA themselves. Moreover, the raids were made without special additional checks by special services, and even more so without any judicial sanctions, if we are talking about American citizens. It was from the air that the man who was called the number one terrorist after Bin Laden, Anwar al-Avlaki, was destroyed in the United States. Everything would be fine, but it turned out that Avlaki had an American passport, which caused a wide public outcry in America. Many Americans saw in the destruction of the terrorist without judicial sanction attempts to neglect democratic values. We all know that in the USA they are used to twirling these values ​​in the way that certain forces would like, but American citizens still believe that their authorities and special services live according to purely democratic laws.

During air strikes with the help of UAVs in Pakistan, which were carried out with the controlling participation of John Brennan, not only representatives of radical extremist groups, but also hundreds of civilians, including children, were killed. Brennan did not apologize to the families of those killed for the “mistakes” by all the laws of the work of the CIA, and the American president had to do this for him directly.

By the way, in the United States itself, judging by the publications in various publications (The New York Times, Huffington Post, etc.), it is Brennan’s participation in the management of operations to destroy “targets”, among which turned out to be foreign citizens (including women and children), and citizens of the United States, with the help of UAVs, causes far more negative than the fact that the candidate for the post of head of the CIA was involved in torture in prison departments. It turns out that pious Americans are not at all moved by compassion for people, but solely by the fear that even if they have an American hawk passport Brennan can deliver his fatal blow as soon as he smells the smell of a terrorist threat from anyone.

However, the candidacy of Brennan does not cause any complaints in the CIA itself. This suggests that the senators will most likely not oppose his appointment. If everything is quiet and smooth in the CIA, despite what kind of person controls this structure, it means that for legislators it is a balm for the soul. Well, the fact that many exclusively pacifist-minded or simply frightened Americans oppose Brennan’s candidacy, so who in the democratic United States will ask them? ..

But the candidacy for the post of head of the Pentagon in the face of Chuck Hagel does not enjoy unequivocal support among senators.
Chuck Hagel - a man whom the providence itself was supposed to bring to the post of head of the US Department of Defense. In his 66 years, Hagel managed to make war and excel in business, and even visit the senator’s chair. “To visit,” however, is not an appropriate word, since Chuck Hagel was in the Senate from 1997 to 2009 a year - more than an impressive period. Today, Hagel is chairman of one of the presidential advisory councils. 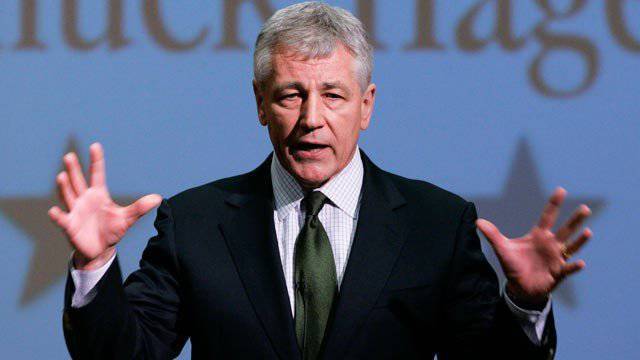 In the photo - Chuck Hagel

From other American politicians, Hagel is distinguished by the fact that he can be called Mr. Yes. Being in the chair of the parliamentarian, he supported all the initiatives that the president put forward, who had one partisanship with Hagel (this, of course, George Bush Jr.) to Afghanistan, for an increase in the cost of the army. In general, it can be said that Hagel is not just Mr. “yes”, but also a typical example of an American soldier (with a length of service) who is ready to support the military adventures with both hands, no matter how doubtful they are. Yes, and the joy of filling the defense budget - a feature of Hagel, which could be ideally suited for the head of the Pentagon. Although here it is necessary to make a reservation: it could fit perfectly, but at other times. Now the White House insists on the need to reduce the cost of the army to try to cope with the growing national debt.
It is the statements on the part of Hagel that the Pentagon should be sponsored no less than in previous years, which cast doubt on a whole circle of senators, especially Democratic senators.

Hagel also has one more "slip" that he can be remembered (already remembered). This mistake is due to the fact that once a future candidate for the post of head of the Pentagon declared that the Palestinians have no less rights to certain lands of the Middle East than the Israelis. These words caused a storm of negative emotions on the part of the so-called Jewish lobby in the USA (Hagel himself pointed out the Jewish lobby), but then everything settled down quite quickly, because Hagel did not express the views of the entire party or a separate department. And now he can become person number one in the US military policy, and therefore the statement about the rights of the Palestinians and the Jewish lobby in America can be remembered to him. True, the possible representatives of the very "Jewish lobby", in particular, Fred Kaplan, say that no one is going to pay much attention to the words of Hagel 5-year-old. It should be noted that Kaplan, like his other colleagues, declare that there is no Jewish lobby in the United States at all, and therefore Hagel needs to worry about other problems.

However, Hagel himself, obviously, in order to reduce the degree of heat, in one of his interviews with the American media he stated that he was not an anti-Semite at all, and he had no intention of uttering anything that could hurt a state like Israel. His words are an attempt, one way or another, to enhance the role of the UN, in which Palestine has long been torn. As far as his words inspired Ban Ki-moon and the Palestinians - история, as they say, is silent, but it is clear that Hagel is one that is even more resourceful. He rushes to a new position, and therefore it will not be necessary to be surprised if all his words about Palestinian rights and about the Jewish lobby Haygel takes back ...

In general, the offices of the chief military and chief intelligence officer of the United States can get their masters in the near future.

Ctrl Enter
Noticed oshЫbku Highlight text and press. Ctrl + Enter
We are
Waiting for an uncertain futureThe armed forces of Syria on the eve and during the uprising in the republic (2011 — 2013)
Military Reviewin Yandex News
Military Reviewin Google News
16 comments
Information
Dear reader, to leave comments on the publication, you must sign in.