The gun must be beautiful 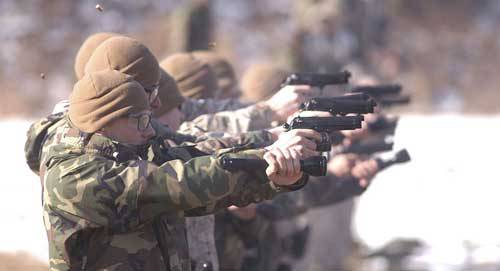 The question of the procurement or licensed production of foreign models of weapons and military equipment for Russian security forces continues to excite not only the expert community, but also very many citizens of our country. In some cases, such decisions seem quite reasonable, in others they cause a lot of questions. Meanwhile, in the beginning of May, another such project became known: the state corporation Russian Technologies is negotiating with the Italian company Beretta about the creation of a joint venture that will produce small weapon.

Sergei Chemezov, general director of the Russian Technologies State Corporation, stated during a meeting with Prime Minister Vladimir Putin that at the beginning of 2011, the possibility of launching a joint production of hunting and sporting guns and pistols was discussed at the negotiations with the Italians (the latter are for employees of special services and the police) . According to the head of the state corporation, the entire range of products of the future enterprise is planned to be delivered both to the domestic Russian market and for export, primarily to the CIS countries.

Also during the conversation with the Chairman of the Government, held on 6 in May, Sergey Chemezov made an important statement regarding the future of some Russian enterprises engaged in the manufacture of small arms: Izhevsk Mechanical Plant, Izhmash and Vyatka-Polyansky Machine-Building Plant Molot. According to Chemezov, military production will be concentrated in Izhevsk, “Molot” is planned to be reoriented. The main military products in the field of small arms in this enterprise were Kalashnikov light machine guns. Now they will be produced in Izhevsk, apparently, the concern "Izhmash" will do it.

Sergey Chemezov explained that for the work of three enterprises producing similar products, it is impossible to collect the necessary number of orders. Indeed, in modern conditions, having a separate production for the RPK-74 and its modifications, in essence representing the same Kalashnikov assault rifle with only a reinforced design and a longer barrel, is an unaffordable luxury. Therefore, the decision to transfer the manufacture of these weapons to Izhevsk should be recognized as quite logical. You can even go a little further and reflect on the feasibility of releasing the RPK-74 in modern conditions. Russia has not recently received export orders for this machine gun, although Kalashnikov assault rifles are still in steady demand from our MTC partners.

Sergey Chemezov didn’t specify what capacities are planned to set up a joint venture with Beretta. Apparently, the site has not yet been selected. However, the questions about what kind of pistol (or pistols) the Italian company is supposed to produce in the interests of Russian law enforcement agencies, and most importantly, whether they (they) need it, are of considerable interest.

Today Beretta offers four basic models of weapons, including those for special forces and law enforcement officers. To be more precise, these are rather two branches, each having two models of similar construction, the main difference of which is the automation scheme: 92 and 90two, 8000 Cougar and Px4 Storm. 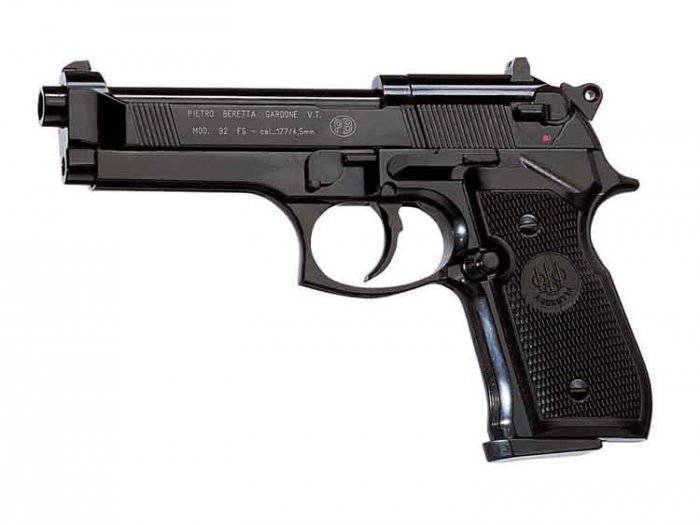 The most famous and popular model of the company is Beretta 92, which under the designation М9 since 1985, is in service with the American military. Its automatics is built according to the scheme with the use of recoil energy in the short course of the trunk and by locking the larva swinging in a vertical plane. The distinctive features of the model are an open top (up to a certain point, this solution was the “family” feature of all Beretta pistols) shutter and frame made of aluminum alloy. 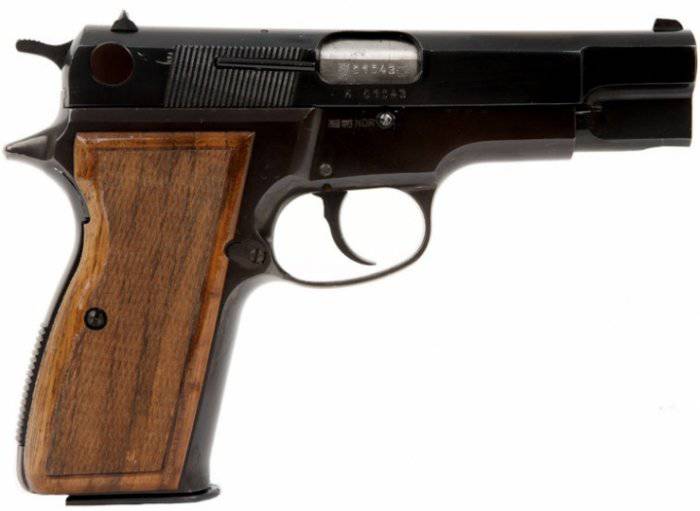 The main ammunition for the 92 model is standard for NATO countries and the most common in the world 9x19 mm, it is also 9-mm Luger / Parabellum, although there are also modifications for the .40SW cartridge - for arming the American police, and also 9-X21 IMI - for civilian market. The capacity of the shop for service pistols of caliber 9 mm - 15 cartridges, the mass of the pistol without cartridges - 945 g. On the whole, overcoming some “childhood diseases”, the most serious of which were the cases of destruction of the bolt and its rear part in the armed forces of the United States and France, Beretta 92 earned a reputation as a powerful and reliable weapon. It is no accident that the gun is in service in the armies and police units of the 21 state.

The Beretta 90two is essentially a somewhat modernized 92 model and is distinguished from it primarily by the presence of an ergonomic modular plastic lining of the handle (it can be individually selected for each shooter) and a standard strip for attaching a tactical flashlight or laser pointer to the bottom of the frame. By design, the type of used ammunition models 92 and 90two are generally identical. The 90two also offers a magazine with increased capacity for 17 cartridges. 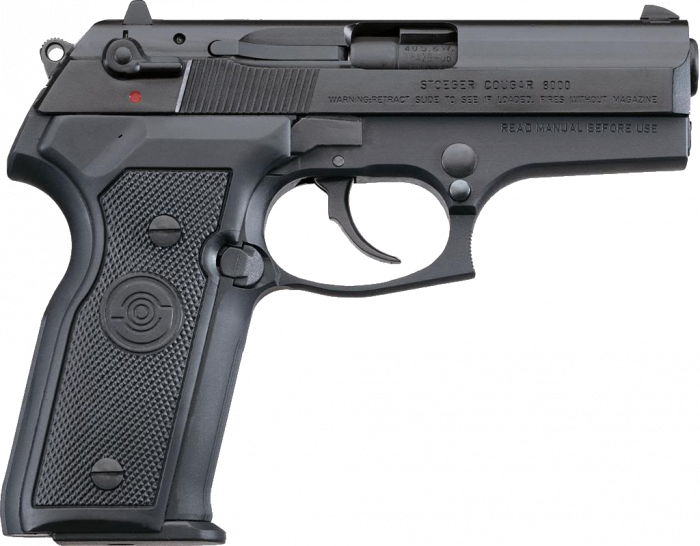 The 8000 Cougar and Px4 Storm belong to the new generation of Beretta pistols. Their main feature is the locking scheme - here it is the turn of the trunk. Unlike previous models of the company 8000 Cougar and its further development - Px4 Storm received a fully closed shutter. Both models have good ergonomics, are more compact and primarily focused on the use of the police. In accordance with the fashion trends of recent years, the frame of the Px4 Storm pistol is made of polymer, each pistol is equipped with three interchangeable backpieces of the handle of different sizes, which allows the shooter to fit the pistol in accordance with the anatomical features of the structure of his hand. In caliber 9 mm, depending on the modification, the capacity of the 8000 Cougar shop is 13-15 cartridges, in Px4 Storm - 17. Due to the use of the Px4 Storm in a polymer frame, the mass without cartridges is relatively small - 785. Px4 Storm is in service with the South African police, the Canada border police and the Maryland police in the United States. 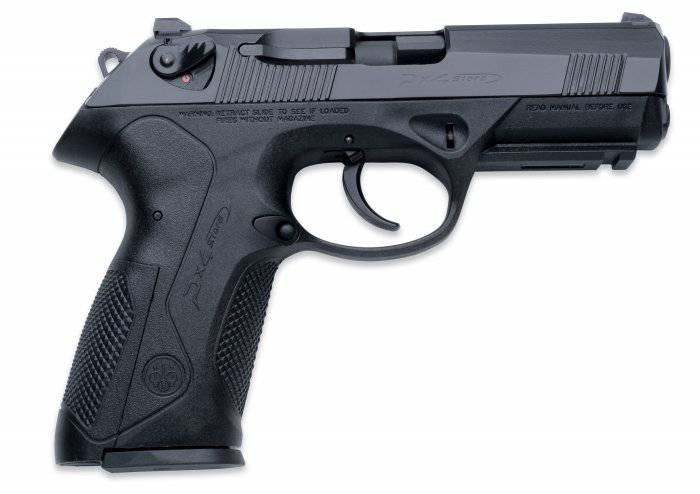 Currently, the rights to manufacture and sell 8000 Cougar pistols are transferred to the American company Stoeger, their assembly is carried out in Turkey.

The main type of personal weapon in the police and other structures of the Ministry of Internal Affairs of the Russian Federation is the Makarov pistol. The PM is a very simple and reliable model, however, these weapons were still considered obsolete in the 80-s and require replacement in the army. In 90-s, they started talking about the need for new personal weapons for police officers. In the interests of the Armed Forces for the competition (the theme “Rook”), announced in 1990, three pistol-cartridge complexes were created: the Yarygin pistol — PYA, the Serdyukov pistol — ATP, and the Gryazev and Shipunov pistols — GSH-18. The last sample, however, did not have time to compete, but in 2003, it was nevertheless adopted for service along with the TL announced as the winner on the topic “Rook”. 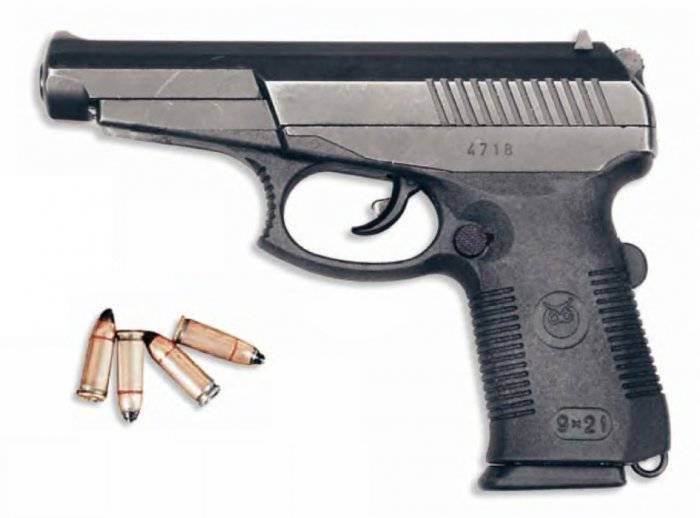 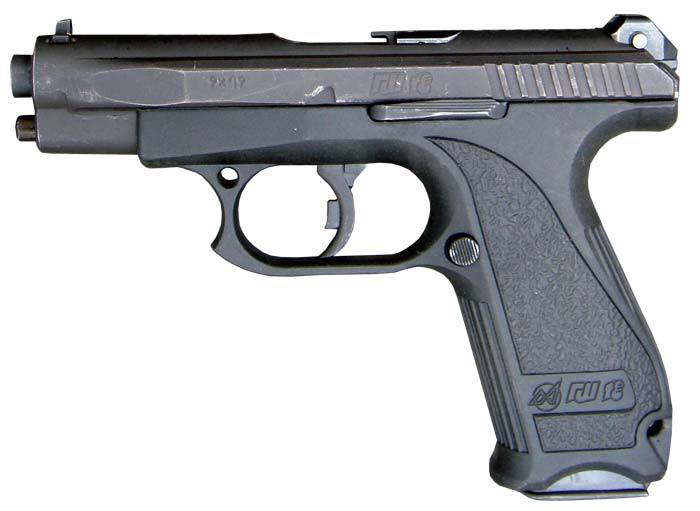 Despite the fact that PJ and GSH-18 were adopted by the Armed Forces of the Russian Federation in 2003, and in 2008, the Ministry of Internal Affairs announced its intention to make the PYP a regular weapon for all its employees, the volume of orders for these samples is still small. The choice of the PJ for arming the police looks somewhat strange. It seems that for them the GSH-18 would be more suitable, having less weight due to the polymer frame (580 g against 950 g of PJ). 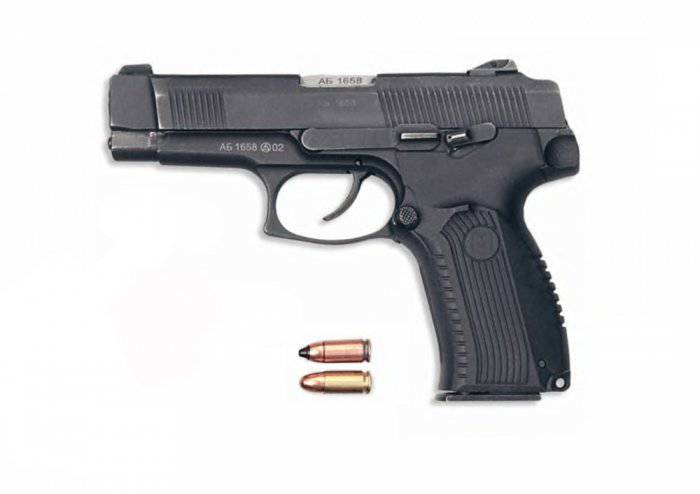 Reviews of new Russian pistols are very diverse. Especially stands out is GSH-18, to whom people who have dealt with it, give diametrically opposite assessments: from completely unprinted to enthusiastic. This indicates that the designers of the air cannons — Academicians Gryazev and Shipunov — managed to create a truly interesting sample of handguns. From the point of view of passport characteristics, the gun looks better than its foreign counterparts, while having less weight (580 g) and a more capacious (18 ammunition) magazine. An interesting technological feature of the GSH-18 is the orientation of the structure on gross production, which, however, has not yet been deployed. Total produced about one and a half thousand GSH-18. In such conditions, it is difficult to debug manufacturing technology, to get rid of the need for manual fitting of parts, and therefore to achieve their full interchangeability. With small-scale manufacturing, the price of the product also remains high, at a level much better than the finished and "promoted" Western designs.

Should Russian police be armed with one of the Beretta pistols instead of domestic PO or GSH-18? To get a really weighted answer to this question can only be based on the results of thorough joint tests of Western and domestic samples. Only practical experience can show which of them is more convenient for wearing and using in the realities of the Russian system of the Ministry of Internal Affairs, more durable, more reliable and easier to maintain. However, nothing has been heard about such testing, and the talk about the supply of products of the Italian company is already underway. It means that the question of such re-equipment is likely to be decided in the plane of attracting administrative resources.

By the way, there is a simpler way out: to allow the officers of the Ministry of Internal Affairs and officers of the RF Armed Forces to independently choose and acquire personal weapons from among the samples included in the officially agreed list. This option is practiced in many foreign countries. But with us, it seems, is not considered.

However, this does not mean that Russia should resolutely abandon any licensed production of foreign weapons. Practical acquaintance with foreign technology and design, quality standards, the attraction of modern foreign equipment to the country in any case will benefit the domestic branch of small arms. The concept of "design" here by the way plays a significant role. Ambiguous, to put it mildly, ergonomics, a very unaesthetic appearance and a rough finish are the hallmarks of most of the models of Russian small arms created in the past 20 years. When used exclusively for internal use, these factors may not play such a significant role, but for export they are very important.

The gun can and should be for the shooter not only comfortable, but also beautiful. After all, a beautiful thing is purely psychologically easier to sell. And when looking at the post-Soviet products of Russian gunsmiths, they don’t really want to spend their own money on them.