December 11 2012
33
Yak-141 - supersonic, multi-purpose aircraft of vertical takeoff and landing, which is designed for close maneuver combat and interception of aerial targets, the aircraft could also be used for striking surface and ground targets. According to the NATO classification: Freestyle - free style. Yak-141 was the third in the world of vertical take-off and landing aircraft, which managed to overcome the speed of sound (after the aircraft EWR VJ 101 and Dassault Mirage IIIV). The first copy of the car was built in the OKB. A. S. Yakovlev in 1986 year. Subsequently, the new fighter was set 12 world records, including to achieve maximum flight altitude, climb with a load of 1 and 2 tons.

The development of the machine has been carried out since the mid-70s of the last century. The fighter was intended to provide cover for aircraft carrier formations from enemy aircraft, conquest and then maintain air supremacy. The plane was supposed to conduct not only short-range maneuverable combat, but also long-range ones. It was planned that these fighters will become part of aviation groups of Soviet heavy aircraft-carrying cruisers "Baku" (future "Admiral Gorshkov"), "Novorossiysk", "Tbilisi" (future "Admiral Kuznetsov"), "Riga" (future "Varyag"), as well as "Ulyanovsk". In addition, the Yak-141 was to replace the out-of-date Yak-38 aircraft on the aircraft-carrying cruisers Minsk and Kiev. It was assumed that the plane will find a place not only on navy, but also in the USSR Air Force. However, the economic crisis that occurred after the collapse of the USSR, the accident of one of the prototypes, as well as the negative attitude towards the “vertical lines” that prevailed among the military then led to the closure of this project. Nowadays, this aircraft can only be seen in aviation museums. 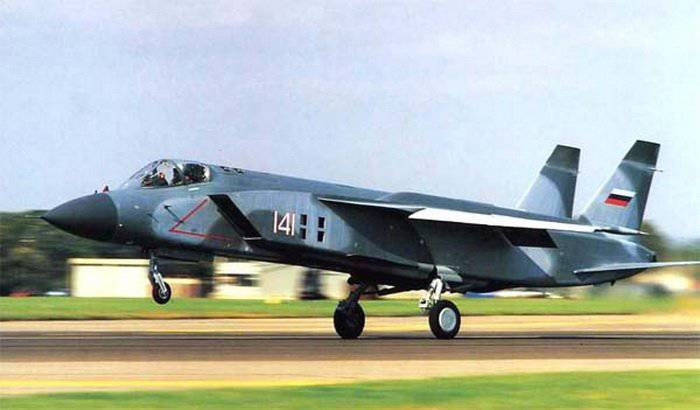 The Yak-1970M fighter-bomber, and then the Yak-36, which appeared at the end of the 38-s, became the basis of the air groups of the Soviet Kiev-class anti-submarine cruisers. These aircraft, it is necessary to admit, were not the best gift for the Navy of the USSR. In terms of flight performance, they were inferior to their British rival Harrier, and their flight safety was of particular concern. The reason for this lay in the choice of an unreliable and quite complex power plant, which was a combination (consisted of a 1 lifting main engine and a 2 lifting engine). Such a decision forced to carry in flight "dead" cargo, as well as spend more fuel on takeoff. At the same time, the location of the nozzles under the tail end of the airframe made it impossible to use changes in the thrust vector to improve the maneuverability of the aircraft. In addition, these machines did not have a system for refueling in the air, outboard fuel tanks and a built-in gun.

By the time the NATO 1980 had advanced versions of the Hariers and Sea Hariers, the Soviet “pocket” aircraft carriers could only respond to them with missile weapons, good for ships of this class damage to the aviation group). Back at the beginning of the 1970-s, the Yakovlev Design Bureau proposed the replacement of the Yak-36 / 38. However, due to red tape and a lack of funding for the project, work on it began only in 1975. The first flight of the aircraft took place only after 11 years. The highlight of the new vertical take-off and landing (VTOL) aircraft was the possibility of its entering a supersonic flight mode, as well as an expanded composition of the weapons used, which was also achieved due to a more powerful and sophisticated radar. 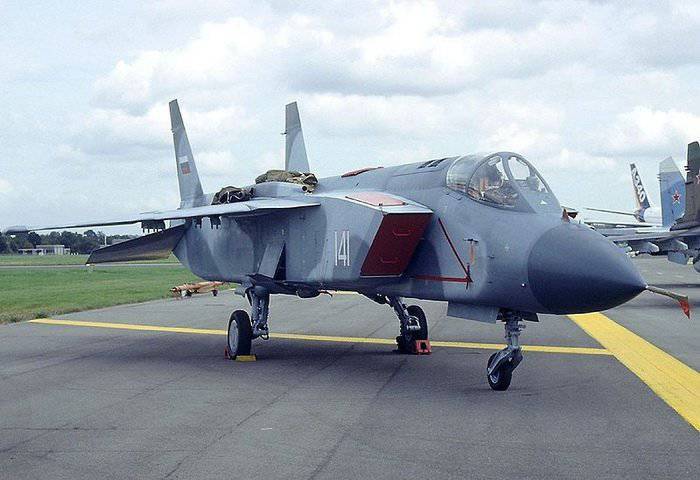 At the same time, engine designers did not manage to design a single lifting and cruising power plant. Thanks to this new aircraft, the Yak-141 inherited all the problems of its predecessors. True, the designers tried to do everything possible to smooth the shortcomings of previous versions associated with the installation of purely lifting engines on the aircraft. First of all, the Yak-141 was equipped with a new electric remote digital control system (EDSU). In this case, the fuselage did not hang over the nozzle of the main propulsion engine P-79, as it was before. This allowed the use of thrust vector deviation both up and down. Using simultaneously with this EDSU, it was possible to significantly improve the vertical maneuverability of the fighter. According to representatives of the Yakovlev design bureau, in its characteristics it was approaching the MiG-29. And with the help of EDSU, it was possible to control not only aerodynamic, but also jet rudders, which had a positive effect on flight safety.

For the first time, the new fighter was shown to the general public in France at the 39 aerospace show at Le Bourget 15 on June 1991. The new multi-purpose supersonic fighter of vertical take-off and landing interested the public. The machine could be operated from ships, as well as runways, with limited dimensions. Yak-141 could fly up without taxiing to the runway of the airfield directly from its shelter along the lead-in taxiway. This ensured a massive takeoff and entry into air combat of the entire Yak-141 unit immediately after the alarm signal. 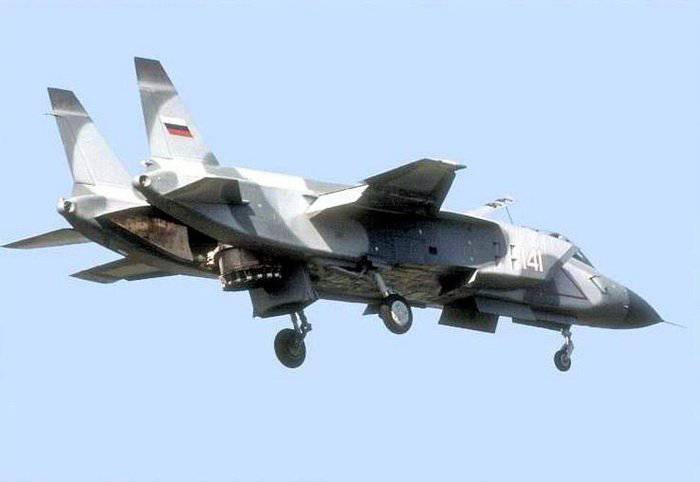 The new fighter Yak-141 had the following advantages over its predecessor Yak-38:

- the implementation of take-off without taxiing to the runway directly from the shelter on the exit track;
-distribution of fighters over a large number of small-sized sites with the provision of stealth and enhanced survival;
- operation of the fighter with damaged airfields by the enemy;
-reduction in 4-5 times the time of take-off units, armed with Yak-141, from the position of readiness 1 in comparison with units, armed with conventional fighters;
-concentration of the necessary group of fighters to intercept air targets on the most dangerous and important areas, regardless of the presence and condition of the existing aerodrome network;
- strikes against ground and surface targets, effective conduct of close maneuver combat;
- a small response time to requests from the ground forces due to the simultaneous take-off of a large number of fighters from dispersed areas located not far from the front, as well as a short flight time;
-basing of a multifunctional fighter both on aircraft carriers of the Navy and on ships of the navy not equipped with a developed flight deck, as well as on road sections and limited take-off and landing grounds.

Testing of the fighter’s vertical take-off regimes began at the end of the 1989 of the year, and test pilot A. Sinitsin on June 13 of the year 1990 completed its first flight with vertical take-off and landing. The unique characteristics of the fighter, which were identified in the course of the tests carried out, made it possible to count on the fact that the machine would officially take the lead among the aircraft of this class. So by April 1991, one of the constructed flight copies of the new fighter was prepared for record flights. These flights continued for 15 days and were performed using control cargo sets. In total, the test pilot of the Yakovlev Design Bureau A. A. Sinitsin was able to set 12 world records for airplanes of this class “H” (vertical take-off and landing aircraft with jet lift). 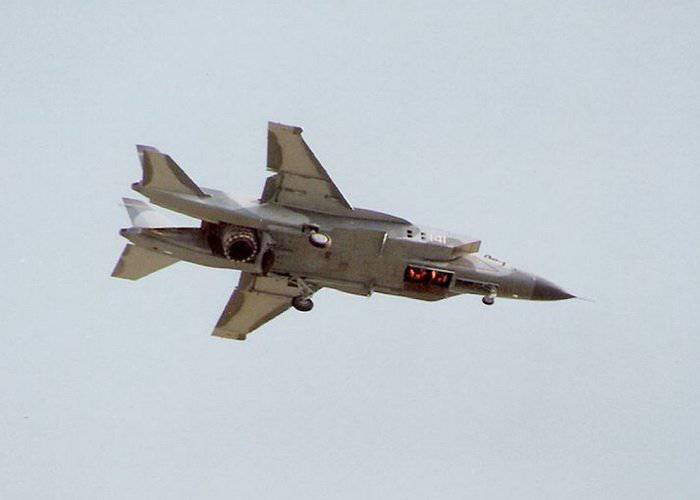 Fighter Yak-141 was a plane, made by the normal aerodynamic configuration with two-tail vertical tail and high wing. The car had the following engine layout: the lift-propulsion engine was located in the rear fuselage while the 2 lift engine was located right behind the cockpit. The wing of the aircraft was swept and had a trailing edge and root nodules. When the aircraft was placed on the deck, the wings were folded out about half a span. The 26% fighter glider consisted of KM, including flaps, socks and wing overhangs, and carbon fiber tail surfaces. The rest of the airframe was mainly made of an aluminum-lithium alloy.

The flight and navigation complex of the Yak-141 vertical take-off and landing fighter provided automatic, director-based and manual control of the vehicle from take-off to landing in various weather conditions and at any time of day at all possible geographical latitudes. The armament control system of the Yak-141 fighter included a multi-mode onboard pulse-Doppler radar "Zhuk", which allowed the use of various kinds of weapons. In addition, the aircraft was equipped with an IR sensor for the search-tracking system and a laser rangefinder. Electronic jamming equipment was installed in the keels and wing tips. At the same time, in the partitions that extended from the keels forward, devices could be installed for ejection of dipole reflectors or thermal false targets. 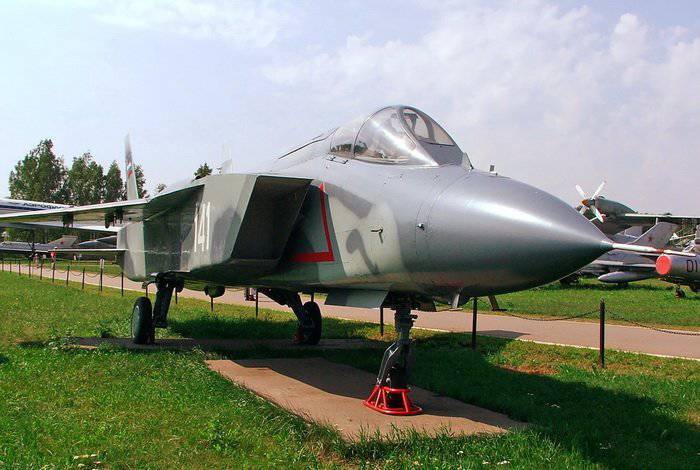 The power plant of the new fighter included the lifting and sustaining engine P-79 produced by the Moscow NPO Soyuz, as well as the 2 lifting engine RD-41 produced by the Rybinsk engine-building design bureau. The round nozzle of the P-79 engine for deflecting the thrust could be rotated up to 95 degrees. The resource of the engine turning mechanism should have been at least 1 500 cycles. The maximum twist on 95 degrees was applied only during vertical takeoff and landing. In addition to the fully vertical take-off, the fighter could still use at least 2 takeoff methods. This is an ultrashort takeoff with slipping and a short takeoff with a takeoff. Both of these take-off modes required a normal deflection of the jet-prop engine nozzle by 65 degrees. At the same time, during take-off and take-off, the nozzle was rotated to this angle after the start of the takeoff, and when taking off with slippage (run-up length of the order of 6 meters), the angle of turn of 65 degrees is set before the fighter begins to move.

The use of non-vertical take-off modes provided the Yak-141 with a large payload, since in such modes the negative screen effect was eliminated, which led to a decrease in engine thrust as a result of hot jet jets reflected from the runway and their suction effect, falling into the engine air intakes.

The armament of the Yak-141 multi-role fighter included: 1х30-mm automatic gun GSH-301 (ammo 120 ammo). The aircraft had 4, and later 6 of underwing points of the suspension, on which the P-73 short-range air-to-air or short-range P-60 melee combat aircraft, as well as the medium-range P-77 or P-27, could be suspended. It was also possible to use air-to-surface X-25, X-31 and 23 mm cannon rifles (250 ammunition ammunition). In addition, the aircraft could carry up to 6 bombs caliber 500 kg. or launch containers NAR caliber from 80 to 240 mm.

Performance characteristics of the Yak-141