Mi-18 - remaining in the project

December 7 2012
7
In the second half of the 1970-ies of the USSR Air Force, a new helicopter was needed, which could lift more than 30 people into the air. The Mi-8MT had a suitable carrying capacity, but it was impossible to accommodate such a number of paratrooper soldiers in it due to the size of its cabin. Understanding this in OKB them. Mile, as well as in his Kazan branch (now it is Kazan Helicopters Mi Research and Production Enterprise), which then worked on all modifications and modifications of the Mi-8, suggested simply increasing the fuselage of a serial helicopter through the use of additional sections. A similar approach for quite a long time has been successfully used in aircraft manufacturing.

The modernization of the helicopter in Kazan started in the year 1977. Originally it was planned to simply lengthen the fuselage of the existing Mi-8MT by incorporating 2-x half-meter sections, which were located parallel to the center of gravity of the machine, while a new additional porthole appeared on board the helicopter. Due to this, there was an increase in the cargo compartment, lengthening it by a meter made it possible to transport the passenger 34 - instead of the 28; 29 paratroopers - instead of 24; 18 wounded, placed on a stretcher - instead of 12. Has undergone a change and equipment of the helicopter. Upgraded machines received the designation Mi-18. Tests of the new helicopter were launched in the 1979 year. But in this form the helicopter did not exist for long.

Due to the lengthening of the fuselage, its vibration characteristics and longitudinal rigidity deteriorated significantly. At the same time, the experience of the Afghan war suggested that it would be necessary to place additional weapons and reservations in the nose of the helicopter, but it was no longer possible to ensure the calculated alignment of the vehicle. In addition, the customer insisted that the helicopter differed from its predecessor not only by increasing the size of the cockpit, but also by improving the economic and flight performance. For this it was necessary to carry out work on a significant improvement in the aerodynamic characteristics of the machine. 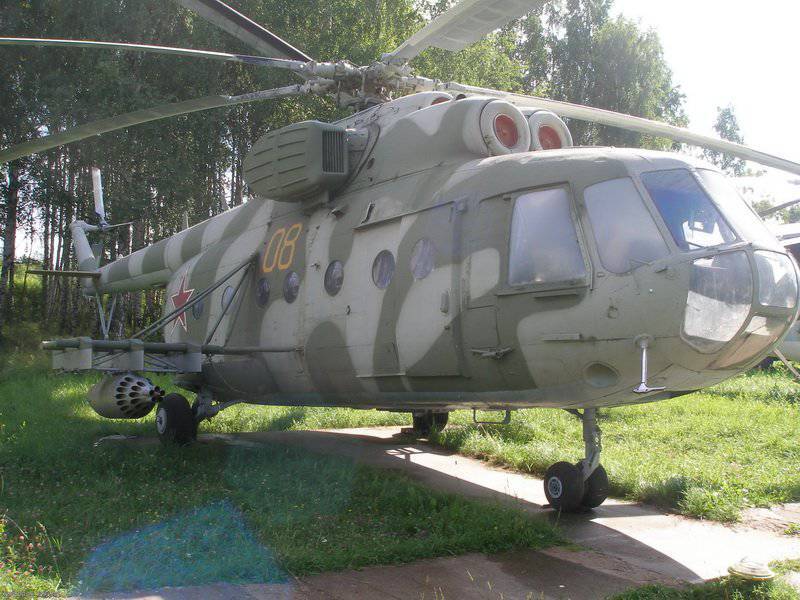 Mi-18, Air Force Center in Torzhok
In carrying out the work, Kazan aircraft designers used 2-e serial machines Mi-8МТ, having 93114 and 93038 serial numbers. One of these helicopters was designed to carry out studies of flight performance, the second - to conduct tests for electromagnetic compatibility of equipment. Both of these machines became the basis for all subsequent work to translate the project of the new helicopter, which received the designation Mi-18, into life.

The next alteration of the helicopter was already more global, two half-meter push-in sections were removed, and their place was taken by one solid meter section, on which there was an additional porthole located behind the center of gravity. At the same time, the rear fuselage contours underwent a significant change, which contributed to a decrease in its resistance.

In this case, alterations are not over. On the Mi-18 helicopters, the lower part of the fuselage underwent flattening, where (under the floor of the cargo compartment) the side fuel tanks sufficiently characteristic for the entire Mi-8 helicopter family were moved into the stream. On the Mi-18, the new carrying caisson tanks were fairly organically incorporated into the power structure of the lower part of the fuselage, which was a novelty in the field of helicopter construction. Such placement of fuel tanks not only improved the aerodynamics of the Mi-18 helicopter, but also, by increasing the construction height of the floor, ensured an increase in the strength and rigidity of the fuselage. In this case, the natural frequencies of the fuselage and the vibration characteristics of the helicopter were significantly improved. The created new design of the helicopter fuselage made it possible to transport significantly heavier loads. A certificate for an industrial design was obtained for an artistic design solution of the external lines of the Mi-18 helicopter.

Since the speed of the helicopter was supposed to grow to 270 km / h, it became necessary to install a retractable landing gear. At the same time, the pyramidal chassis was replaced by a three-post linkage, similar to that already used on the Mi-14 helicopter. The main landing gear at the same time were removed in a small and fairly elegant pylons, wings, located on the sides. To reduce the number of speakers in the flow of units on one of the prototypes of the Mi-18, the kerosene heater fairing was removed. In general, the shape of the new helicopter in comparison with its predecessor have become much more noble. 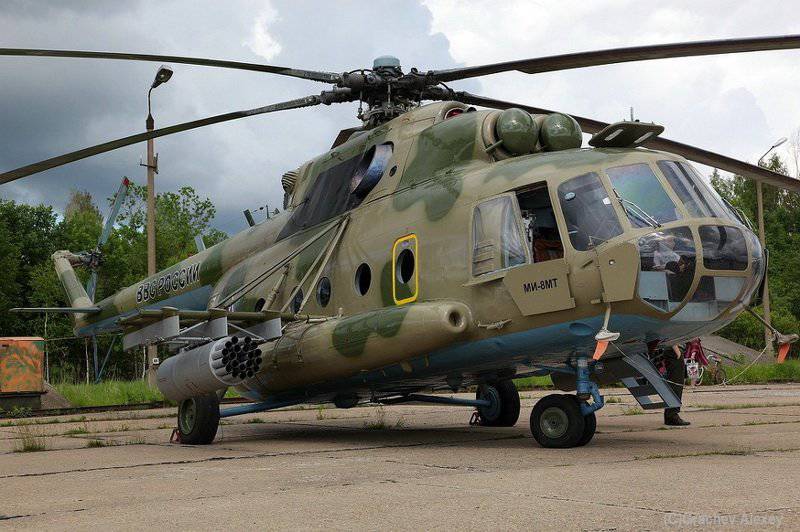 Standard Mi-8MT
A significant improvement in the economic and flight performance of the Mi-18 helicopter was to be facilitated by the installation of new blades made of fiberglass. The tail rotor was moved from the right side of the tail boom to the left side. A modification of the engines used was also envisaged. To protect the car from anti-aircraft missiles, special screen-exhaust devices were installed, which were responsible for suppressing the infrared radiation of helicopter engines. The number of side doors increased to 2-x. It was decided to change the electrical equipment of the machine, it was supposed to equip the helicopter Mi-18 with radar.

Factory tests, which the Mi-18 took place in the 1982 year, demonstrated the following flight performance of the new machine: the 10-15% increased the flight range; on 11-12% increased maximum flight speed; the 10-12% was able to reduce fuel consumption (up to 0,25 kg / hp h). In this case, in the case of further development of the new fiberglass blades, the characteristics of the helicopter could be further improved. With all this in its weight characteristics of the machine, in fact, moved to another class. While the conventional Mi-8MT could transport up to 4 tons of cargo inside the fuselage and up to 3 tons on the external sling, the new Mi-18 could transport 5 tons of cargo both inside the fuselage and outside, and the designers hoped to bring the maximum load on the outside Suspension up to 6 - 6,5 tons.

In the event that the helicopter was put into service, its designers assumed the maximum use of technological equipment of mass production, as well as experience in the repair and operation of the Mi-8 helicopter. At the same time, the direct conversion of already existing Mi-8 helicopters into Mi-18 was envisaged. The flight crew was planned to be transferred from one helicopter to another, practically without retraining and retraining. But the coming restructuring and the collapse of the country confused all the plans of the creators of the helicopter.

The leadership of the CPSU demanded from designers the development of fundamentally new types of equipment that would correspond in their characteristics to the latest foreign counterparts, and not to modernize existing helicopters. In addition, the war in Afghanistan ended. Under the new conditions, the USSR Air Force was no longer able to finance the further development of the Mi-18, deciding to limit itself to the availability of multi-functional Mi-8 helicopters. At the same time, the Ministry of Civil aviation preferred the creation of a more promising Mi-38 helicopter. 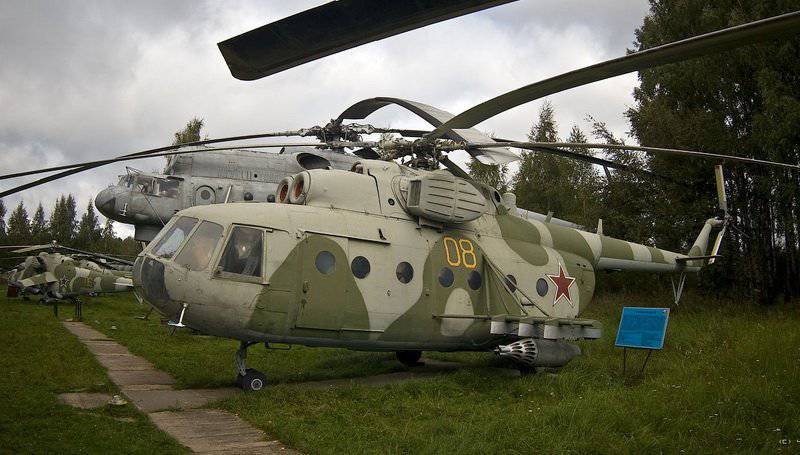 Mi-18, Air Force Center in Torzhok
The only two models built Mi-18 were transferred to the training centers of the Russian Air Force as visual aids. One of them is located in the Tver region in the town of Torzhok in the Helicopter Training Center. Many elements of construction and equipment that were tested on the Mi-18 were later used on the serial Mi-8МТ and Mi-17.

The tactical and technical characteristics of the Mi-18 helicopter: