Resuscitation of military medicine: is the patient rather alive? .. 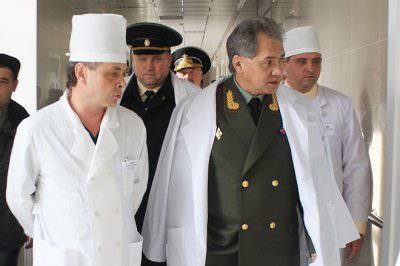 If you answer the question about which branches in Russia you could be proud of at different times and you can be proud now besides ballet, astronautics and hockey, then you can also talk about military medicine. The level of medical care and its effectiveness in military hospitals in our country have been high ever since these institutions began to appear in Russian cities. The quality of medical services provided by military experts was not questioned either during the times of the Russian Empire or in the Soviet era. It would seem that if the industry has such a glorious history and brings obvious benefits to the citizens of the country, it must be supported and developed with all its might. However, the term “optimization” has reached military medicine, and this term, as we know, is such that it often provokes, let's say, rapid intervention in social organisms without any anesthesia.


The optimization of the military-medical sphere with the previous leadership of the Ministry of Defense reduced to the fact that instead of implementing a program to develop the industry, improve the training system for specialists and introduce innovative methods of medical care, mass cuts began on everything that could be cut, and even not too. The medical institutions of the Ministry of Defense, one after another, began to lose high-class specialists, falling under the optimization press: fewer staff - more wages for those who remain in their places. A kind of salary increase due to the very large-scale dismissal of colleagues has caused and continues to cause obvious bewilderment among military doctors.

In a conversation with a journalist from our publication, a former employee of a military medical institution, the Moscow Military District, shared information that the system for reducing the staff of military hospitals under the former Minister of Defense gained such momentum that the term “optimization of workers’ staff ”is the softest name that could be replaced the real state of things.
The 40-year-old military surgeon of the highest category fell under the "optimization" cleaning, having almost 20 years of experience in military medical institutions behind him. The man who saved the lives of hundreds of servicemen who fell on the operating table after the hostilities in the Chechen Republic, Dagestan, Ingushetia, after aviation accidents, road accidents and explosions; a man, whose hands brought people back literally from the other world, today is forced to work ... as an assistant locksmith in a private auto repair shop! Why did Russian military medicine suddenly cease to need such a highly qualified specialist is a mystery that lies in the intricacies of the military reform, when all the “superfluous” can be sent “to rest” in accordance with the wording “optimization of personnel”.

For obvious reasons, the military physicians, and all those who are not indifferent to the course of the reform, expressed satisfaction with the steps of the new Minister of Defense, remembering the actions of the previous minister in terms of reforming military medicine with strong words.
Sergei Shoigu, after exploring the steps that had been taken by his predecessor, came to the conclusion that if you didn’t start to deal with the urgent issue immediately, then all military medicine could be on the verge of survival. That is why one of the first orders of Sergei Shoigu was first to suspend and then cancel the decision to "move" the Kirov Military Medical Academy from the Northern capital to the Leningrad Region (Gorsky village). Various Russian media outlets repeatedly wrote about such a move, including the Military Review. Medical academics expressed bewilderment about the fact that it was necessary to transfer an educational institution that practices direct medical care to citizens in the region. After a series of corruption scandals related to financial fraud with real estate in the Ministry of Defense, materials appeared in the press that, perhaps, the building of the Military Medical Academy to some of the officials strongly "attracted", and therefore could be realized as non-core. One can imagine the extent to which someone could warm their hands on the implementation of a historic building in St. Petersburg ...

Sergei Shoigu decided to stop the "relocation" of the St. Petersburg Medical Academy. Kirov and instructed the most thorough way to understand the feasibility of disbanding around 30 military medical institutions providing medical services to thousands of military personnel and civilians. If it were not for the order of the Minister of Defense, these medical institutions would have to cease their activities by the end of this year.

Shoigu himself decided to take a closer look at the issues related to the process of reforming military medicine in Krasnogorsk near Moscow. Here is situated the famous Vishnevsky Clinical Hospital, which belongs to the Ministry of Defense of the Russian Federation. The minister said that the reform process itself cannot be done without serious consequences, but the task of himself (as the minister) and others responsible for the reform process must be that the reform is carried out in a balanced way. The updated ministry states that people who find themselves without work after the disbandment of military medical facilities should be provided with equivalent work in the relevant field, and patients would not be left alone with their illness after the disbandment of military hospitals.
Sergey Shoigu says:

“We must be aware of the consequences of this alarming trend. No professionals - no quality service. All the indicated problems require increased attention. ”

Obviously, in such a situation, the question of a single military surgeon, who suddenly turned out to be outside the scope of reform and forced to earn a living by far from medical practice, should be addressed to all military doctors who, no doubt, find themselves in a difficult situation.

So, Sergei Shoigu instructs his subordinates to stop the fever and to begin deliberate actions to analyze the current situation in the military-medical industry. It is obvious that the Minister could not remain indifferent even after the figures that the Acting President announced. Chief of the Main Military Medical Department of the Ministry of Defense Vyacheslav Novikov.

Novikov announced that the position of the military physicians had actually begun to deteriorate in the 2009 year, when, according to one of the orders of the regular staff category, medical service officers were lowered by at least one level. Naturally, this was reflected in the income level of most military doctors. The Ministry of Defense’s health service officers ’income increase was taken in a radical way: reducing the number of medical staff so that even Novikov today cannot give an exact figure for these reductions. However, even the reduction in the number of military medics, for some reason, did not lead to a serious increase in the wages of those lucky enough to remain in their workplaces. The fact is that the level of financing of the military-medical sector from the budget, as Vyacheslav Novikov claims, has more than doubled. This figure indirectly makes it clear the real extent of the reductions that have been carried out in the industry.

According to the correspondents of the Russian Newspaper, about 17 of the Russian regions have completely lost their medical institutions of the Ministry of Defense. This led to the fact that about 400 thousands (!) Of military personnel and military pensioners are now forced to apply to the already crowded civilian medical institutions. One can imagine the degree of increase in the burden on civilian health workers ... And if in some regions of Central Russia military retirees, theoretically, without any problems, can afford to seek medical help in civilian clinics and hospitals, that is, there are many such regions where to the settlement with the nearest hospital at least several hundred kilometers. Yakutia and Chukotka are vivid examples.

After reviewing the information of such a negative nature, the Minister of Defense immediately ordered to allocate 1,4 billion rubles for the purchase of new medical equipment, to re-equip military hospitals with graduates of medical universities, to resolve the issue of the need to put into operation the so-called hospital courts, to analyze in detail the very need to reduce the number of military medical facilities those or other regions of the country. In addition, Sergei Shoigu said that the Kirov Military Academy in St. Petersburg should remain in place, additional funds will be allocated for its development. Shoigu insisted that the authorities of the Northern capital together with the Department of Property of the Ministry of Defense would find reserves of city real estate for the expansion of the educational institution.

In Krasnogorsk, Sergei Shoigu announced that the most successful military medical centers should return the status of federal budgetary institutions selected from them already next year, which made them dependent on the local financial "microclimate".

Such orders of Sergei Shoigu can not but rejoice, because every year the military reform for military medicine became more and more alarming. Today, Minister Shoigu is shifting the reform in a single area to virtually manual control. After working in the Emergencies Ministry to solve such sharp questions, he is no stranger, and therefore we will expect positive results, and hope that experienced military specialists will return from the markets and garages to fulfill their professional duties in well-equipped military hospitals and polyclinics.