November 28, 2012
12
Recently, we constantly observe the development and creation of various types of armored military equipment. But universal technical means that can move quickly in several environments are developed mainly as needed. So, for example, when technical means were needed to develop the Arctic, they began to hastily create amphibians that could move on water, ice, snow and earth. Today, the US military required technical means capable of moving goods through water barriers, passing through marshy and sandy terrain. To realize all these features in one machine, the Tactically Expandable Maritime Platform program was developed, within the framework of which a prototype floating tank called "CAAT." 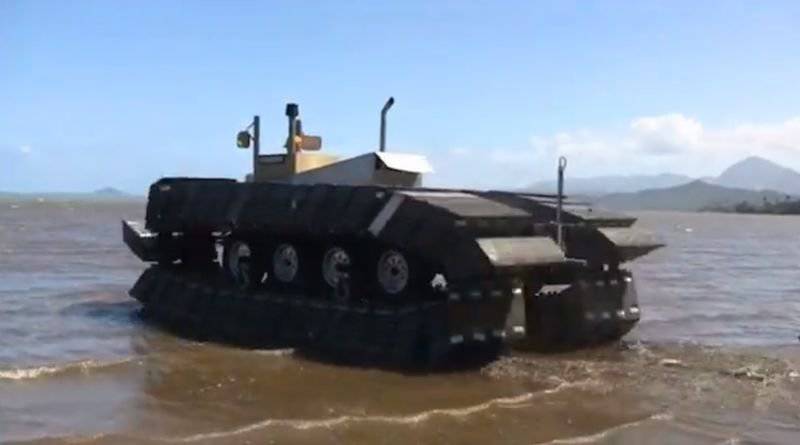 The purpose of this development is to provide with the help of innovative solutions to quickly transform any ships and container ships into original supply bases for use in conducting combat operations, conducting rescue operations without the need for construction or the availability of port-berthing infrastructure. The main purpose is to perform emergency and rescue tasks for the delivery of goods, residential solutions, medical care, food and water.

While it is not planned to supply this solution with weapons - the main purpose will be the transportation and delivery of goods. One can only wonder why the name Saat was called a tank. Maybe the force of habit has affected, to call the massive technique of tracked performance - a tank, maybe for other unknown reasons.

The most important feature of the SAAT is the execution of a tracked drive. It is completely different from the usual iron tracks and created from sealed plastic and soft tanks, inside which there is air. Such an unusual solution allows this technology to quickly and successfully move on the usual ground, overcome water obstacles, move cargo along sandy and swampy areas. The tracks allowed the tank to significantly reduce the pressure exerted on the supporting surface, and it does not exceed 0.14 kilograms per cm2. 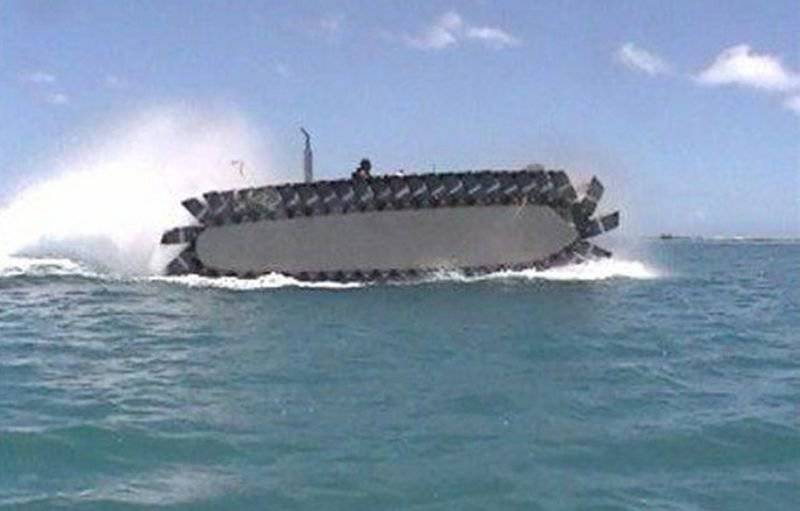 Built an experienced amphibious tank is a reduced demonstrator scale 1: 5. DARPA wanted to show that design and innovative solutions embodied in the demonstrator work in real conditions, and work according to calculations. After a research test, CAAT will be transferred to the scientific department of the United States Navy. There they will finally decide the fate of the "Tactically Expandable Maritime Platform" program. Perhaps it will be selected for partial replacement of hovercraft, as a multi-purpose floating transport. If CAAT is adopted for further development, it can be put into service as early as 2015. The demonstrator has a length of just over 10 meters and weighs about four tons. The real CAAT will have a length of 50-60 meters and a weight of about 450 tons.

The concept of CAAT for the Navy is the delivery of standard (ordinary civilian) containers with universal transport from ship to shore or to the coastal region. A floating transporter is not required to unload (load) berthing solutions, he is able to get out onto the rocky or marshy shore, and also to deliver the transported cargo to the depths of the coastal zone. In the armed forces, it can be used in the implementation of unconventional plans for waging war, the rapid delivery of goods and ammunition to impassable areas and assistance to victims of accidents, catastrophes and disasters.

As you know, the delivery of large-tonnage cargo in a given area for any purpose, it is easiest to carry out by water. Thus, an average container ship can deliver about 5 000 20-foot containers or 100 thousand tons of cargo close to shore. A container ship can easily deliver cargo to rivers and lakes. But unloading containers can be quite difficult. With the provision of new floating transporters, using ship cranes, standard containers can be quickly delivered to the desired point of discharge. In addition, CAAT is not very sensitive to the presence in the water of foreign objects that are present in the water during natural disasters and catastrophes.