November 27 2012
5
Submarines of the Bars or Walrus type for the Baltic Sea were built in 1912 under the shipbuilding program “Hastily Strengthening the Baltic fleet"in the amount of 18 units. According to this program, six submarines were intended for the Siberian flotilla, twelve - for the Baltic Fleet. The choice of type of submarines for construction under the 1912 program was determined by tight credit and time constraints. In January-March of the same year, they began to work out tactical task: According to the tasks agreed by the MGSH (Marine General Staff) and GUK (General Directorate of Shipbuilding), the total surface speed of the submarine was to be 16 knots, submarine the course of the course is 11-12 knots, the cruising range at the surface at a speed of 10 knots is 2500 miles, in the underwater position at a speed of 11-12 knots is 25-33 miles.The boat was to be armed with 2-4 bow tubular torpedo tubes, 8 torpedo tubes Dzhevetsky’s system Draft was supposed to be 3,66 meters. 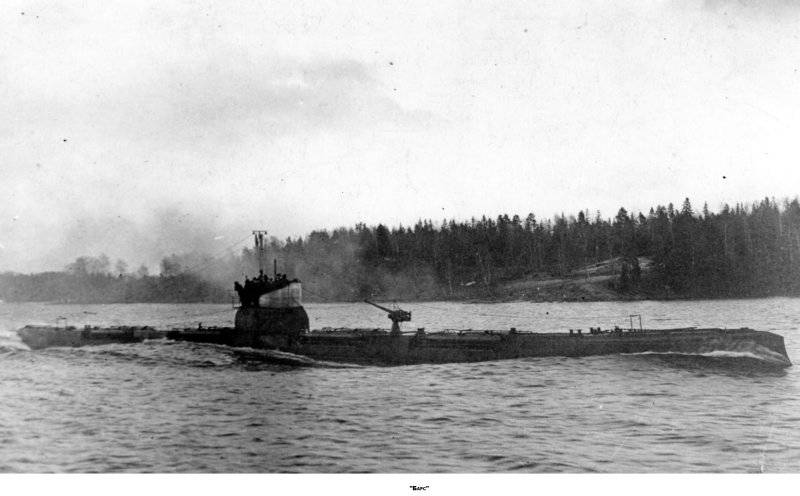 In tasks that were developed in the Baltic Fleet diving brigade, the requirements for surface speed were increased to 18 nodes, the navigation range at 10 nodes speed was 3000 miles, the submerged speed was reduced to 10 nodes, torpedo armament was to consist of 2 fodder and 2 nasal tubular torpedo tubes and 10 apparatus of the Drzewiecki system, the draft was to be 4,28 meters, dive time - 3 minutes, buoyancy margin 25%. There was also a requirement to install watertight bulkheads to ensure surface flooding. Based on data from the MGNS 11 March, 1912 developed a task in which the surface speed requirements were reduced - at least 16 nodes, the submerged speed was increased to 12 nodes and the submarine range - "25 miles with 12 nodes + 46 miles economizer". Torpedo armament - two nasal tubular torpedo tubes and twelve devices of the Dzhevetskogo system (later the number of torpedo tubes of Dzhevetsky was reduced to 8 units). As a result, 21 June 1912 of those. The board of the State Command Board decided to stop the choice on the submarines of engineer Bubnov, namely, on the Walrus submarines. Since the fulfillment of all the requirements of the Marine General Staff led to an increase in the cost of 600 thousand. rubles for each submarine and displacement up to 900 tons, those. the board decided to limit the full speed of the underwater stroke for 3 hours - 10 nodes, with the mandatory increase in speed in the surface position to 18 nodes. Recognizing the need for watertight bulkheads, they were abandoned due to lack of credit. Projects of submarines on the basis of the Morges submarine were ordered to the Noblessner company and the Baltic Shipyard. Their review took place on 2 August 1912. The displacement of the submarines of the Baltiysky Zavod was 660 tons, the diameter of the hull was increased by 110 millimeters, the metacentric height was 1200 mm, two diesel engines were to work for each shaft, the displacement reserve was 8 tons. The Noblessner project (to which IG Bubnov passed) is the displacement of 650 tons by increasing the length of the cylindrical insert by 915 mm, which made it possible to “better place the cabins for personnel and engines”, the metacentric height is 960 mm. The Noblessner project was recognized as the best and made a mandatory requirement to reduce the displacement reserve to 1 percent of the surface displacement. Four submarines were ordered to the Noblessner plant (not yet existing at the time of the order) and two submarines to the Baltic plant. All boats were ordered for the Baltic Sea. Another six submarines, in the same proportion, were ordered at the start of the 1913 of the year. December 12 On the same conditions, 1913 ordered six submarines for the Siberian Flotilla. The cost of one submarine built Baltic plant was 1 million 550 тыс. rubles (excluding the cost of torpedoes), "Noblessner" - 1 million 775 тыс. (including ammunition torpedoes). The beginning of the construction of the first submarines at the Baltic plant July - August 1913, the period of readiness for testing according to the plan - summer 1915. The beginning of the construction of the first nine Noblessner submarines - May-December 1914, the planned readiness for testing 2 boats - 1915 year, 6 boats - 1916 year, and 1 boats - 1917 year.

The first four submarines of the Baltic Shipyard were laid by Bars - July 20 1913 of the year, Vepr - August 1 1913 of the year, Cheetah - August 17 1913 of the year and Wolf - 2 September 1913 of the year. The boats were handed over to the fleet on July 25, September 3, July 12 and April 15 1915, respectively. Due to the lack of diesel engines for the project, 2 diesel engines from gunboats of the type “Squall” of the Amur Flotilla were installed on these submarines, the power of each 250 HP. Established diesel engines ordered the German firm Krupp for the head submarine, for the second and third, the Riga Feldzer plant, and for the fourth diesel engine it was supposed to create the Baltic plant using German technology. The maximum surface speed of the Leopard submarine is the 9,7 node, the cruising range at this 3065 speed is miles, and the dive time of 3 is minutes. On the submarine "Wolf" - 11,15 nodes, 2400 miles and 2 minutes 10 seconds, respectively. In 1915, artillery was included in the armament — in July, the 37 caliber gun and the 7,62 caliber machine guns were tested on the Cheetah and Bars. Maritime Minister 11.09.1915 approved the decision to install on all submarines one 37-mm and 57-mm artillery guns and one machine gun.

In fact, this composition was installed only on the Bars and Cheetah submarines. "Lioness", "Tiger", "Wolf" and "Wild boar" received two 57 mm caliber artillery systems, and "Lioness" and "Tiger" received an additional 37 mm caliber gun on the curved pedestal (weight about 128 kg). “Lynx”, “Leopard” and “Panther” got one 57- and 75-millimeter guns each. Maritime Minister 23 December 1916 of the year approved the decision to arm thirteen Bars-type submarines with "non-standard diesels" with artillery consisting of 57-, 75-mm guns and 7,62-mm machine guns. Submarines "Cougar" and "Snake" with regular diesel engines were to receive a bow 57-mm gun, one 37-mm gun and a machine gun. In the 1920-e years on the submarines of the type "Leopard", remaining in the ranks, 57-mm guns were replaced by 75-millimeter.

During the tests of the Leopard and Cheetah submarines, several design flaws were identified: strong hull vibration during operation of main engines, very low arrangement of Djevetsky system torpedo tubes, insufficient strength of deck tanks unmasking fountains of water during the dive, slow filling ballast tanks by gravity, insufficient periscope attachment rigidity, and others. Refinement taking into account these shortcomings began with the submarine "Vepr", while: on the submarines of the Baltic plant, the diameter of the Kingston was increased to 254 millimeters, and on the submarines of the Noblessner plant - to 224 millimeters; changed the system of exhaust air from the ventilation valves of the terminal TsGB; on submarines with abnormal diesel engines, four centrifugal pumps were installed (capacity of each 900 m3) instead of two; the control posts of the bow and stern horizontal rudders were moved to the central post; established steam heating, and also took other measures to improve the conditions of habitability. Dzhevetsky's torpedo tubes were transferred to the VP, and niches for them were sealed. On the Leopard, Cheetah and Wild Boar submarines, this was done in the winter of 1915 / 1916, while on the Wolf, Tigre, Lioness and Panther - during the extension. There were no cutouts on subsequent submarines. In 1920-ies Torzhetsky's torpedo tubes were removed. Submarine anchors replaced by more heavy. Established wooden keels for lying boats on the ground. 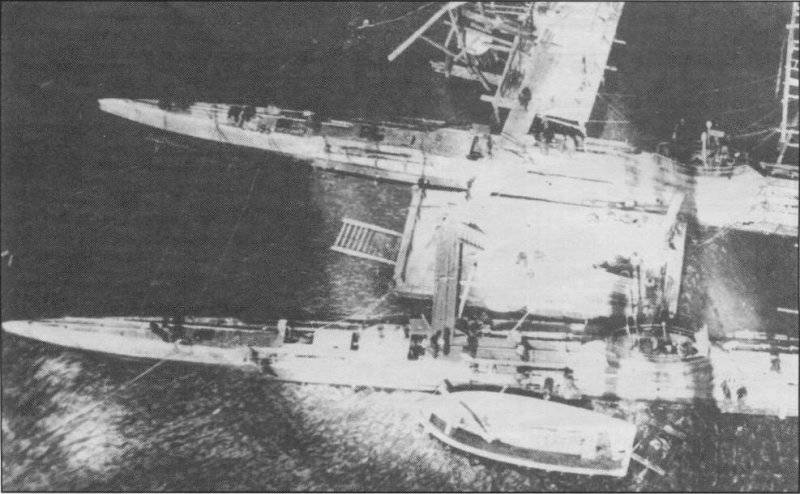 3 of July 1914 of the year (Tiger, Lioness, Leopard, Cougar, Lynx, Panther, Jaguar, Tour for the Baltic Fleet; "Eel", "Yaz", "Trout" and "Ruff" for the Siberian Flotilla). Since the Noblessner plant in Revel, conceived by the center of the submarine shipbuilding, was only being built, the Kuguar, Panther, Tiger and Lioness submarine hulls were made at the St. Petersburg Admiralty Plant, and then assembled in Reval.

The first eight submarines (from "Lioness" to "Jaz") were launched in 1915-1917 and 14 was launched in May, 28 in December, 30 in December, 23 in July, 4 in November and 14 in April 1916, 8 in August, 4 October 1917, respectively. The submarine "Ide" was not completed, in the 1920-s it was dismantled for metal. Construction of the submarine "Trout", "Ruff" and "Eel" was transferred to the Baltic plant. October 22 1916, the submarine "Eel" was launched, entered service in the spring 1917 year. The submarines "Trout" and "Ruff" were completed as mine-layer barriers. In addition, the Unicorn and Snake submarines (originally for the Siberian Flotilla) were laid in the summer of 1915 of the year at the Baltic plant, and 1916 and March 1917 of the year entered service in December, respectively.

Diesel engines having rated power 1320 hp each, were installed only on "Snake" and "Cougar". The full surface speed of the Kuguar submarine was a 16,65 node. Surface range is 2400 miles with 11 nodes. Submarine data submarine distances: 28,4 miles with 8,6 nodes and 150 miles with 2,35 nodes. On submarines "Unicorn" and "Eel" established 420-strong diesel engine company "New London". The full speed of the submarine "Unicorn" were: surface - 12,5 node; submarine - 7,7 node. Navigation distances are 2600 miles with a 8,3 node and 22 miles with a 7,7 node. According to feedbacks from seafarers, the size of regular diesel engines was too large for the compartments of Bars-type submarines, so normal maintenance is impossible. Diesel engines of the company "New London" were unreliable. 250-strong diesel engines of the Kolomna plant were more reliable, provided a greater cruising range, however, the propeller pitch, which was 1,1 meter optimal for these diesel engines, was unprofitable for electric motors, which, combined with artillery weapons, additional rudder fences, etc., resulted in a decrease in the speed of the full underwater move.

The submarines of the Bars type differed in design and construction from the Walrus submarines in the performance of tanks: the leveling tank was made in the form of a cylinder that covered a tear-off tank, each trim tank was reduced to 2,5 tons; the space between the double spherical end bulkheads was divided by a horizontal bulkhead into tanks — upper (trim) and lower (for fresh water). Metacentric height in surface position - mm 120; in the underwater 180 (200) mm.

An attempt was made to supplement the submarine armament with a mine weapons. On the submarine Vepr, mine rails were installed in 1915, but the trimming was broken, and the device was dismantled. On the submarines "Leopard", "Lioness" and "Tiger" on the sides installed brackets with sockets for 8 min. However, these devices have not received combat use.

On submarines "Leopard" and "Wolf" to ensure charging of batteries at the periscope depth, the telescopic receiving tube of the ship ventilation was lengthened to the level of the periscope stands; at the same height raised the exhaust pipe from diesel engines. Due to the small cross-section of the reception pipe, there was enough air only for the operation of one diesel engine.

All Bars-type submarines have been equipped with a wireless cable with a removable antenna. The 1916 kilowatt radio station and the English folding radio mast were tested on the X-NUMX / 1917 submarine in the winter of 5 / 1916. In XNUMX, twelve sets of underwater signaling devices of the American company Fessenden were received and, by September of the following year, were installed on the Tur, Jaguar, Panther, Lynx and Tiger submarines.

On 6 submarines in 1917 year, 5 sets of pneumatic scissors sets for cutting anti-submarine networks were installed.

The submarine "Wolf" in the First World War has achieved the greatest success - it sank four vehicles with a total capacity of 9626 reg. m. In the Civil War, the submarine "Panther" sank the English destroyer "Victoria". In 1917, the submarines "Cheetah", "Lioness" and "Bars" died. The submarine "Unicorn" suffered a navigation accident, was raised, but 25 March 1918 of the year sank during the Ice Campaign. 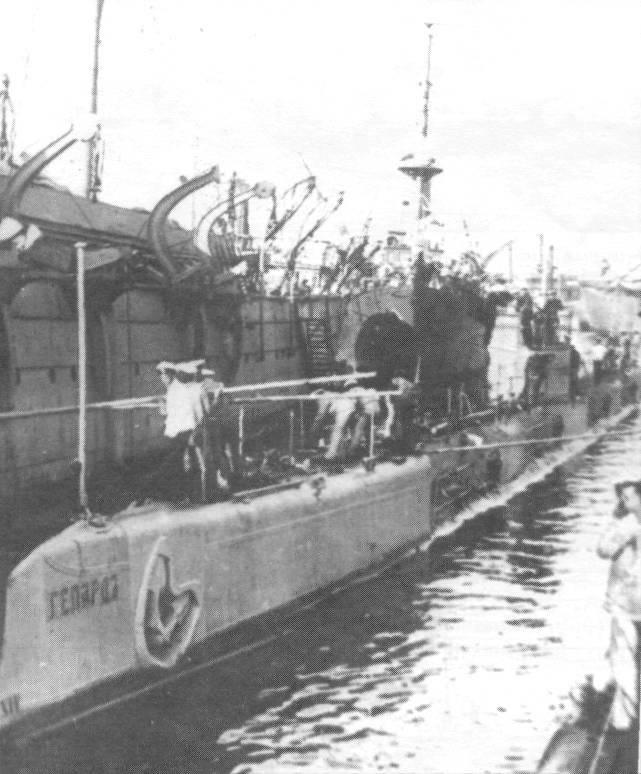 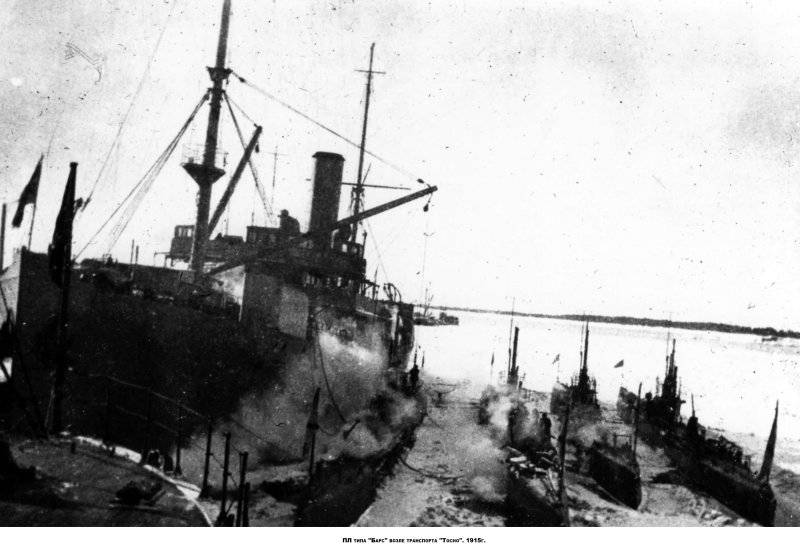 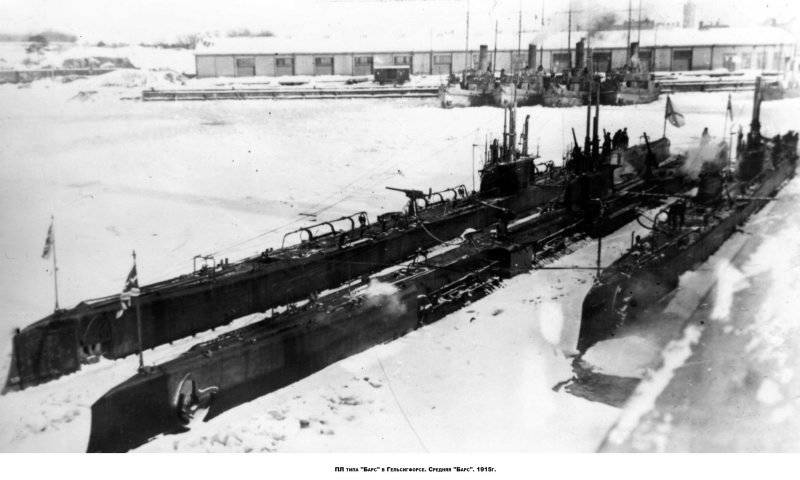 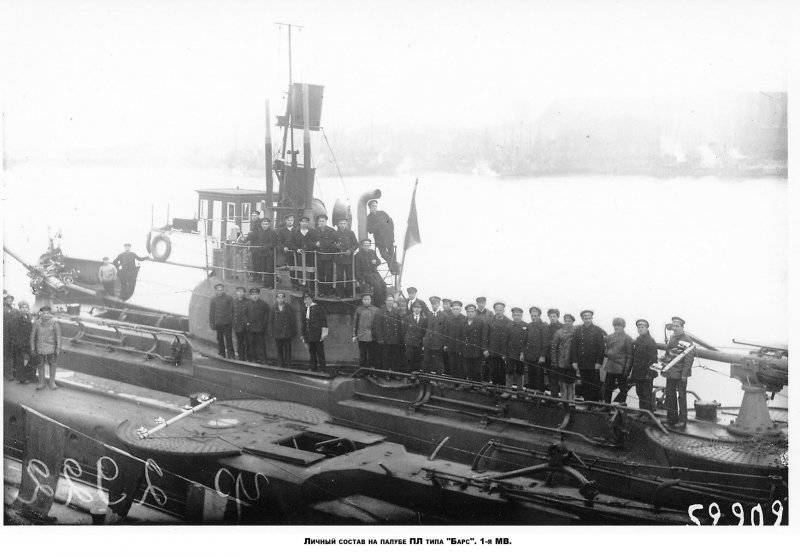 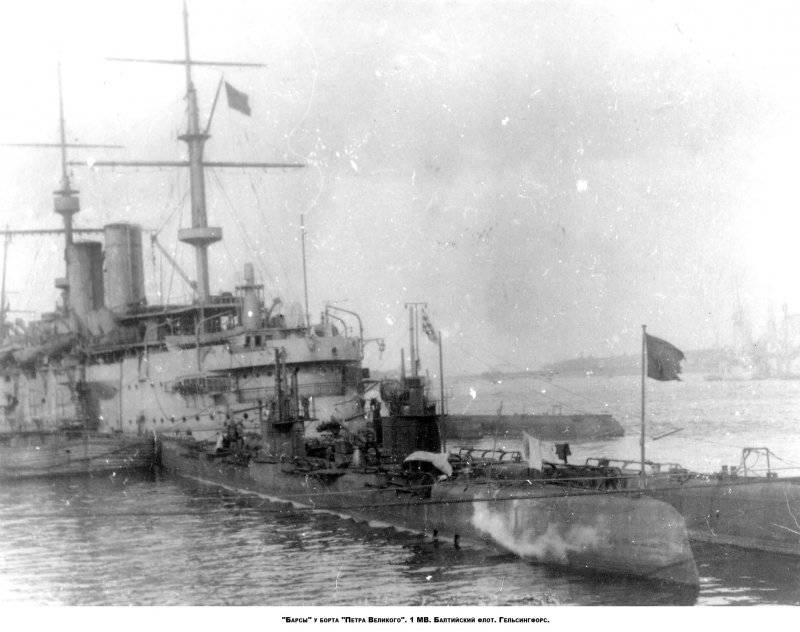 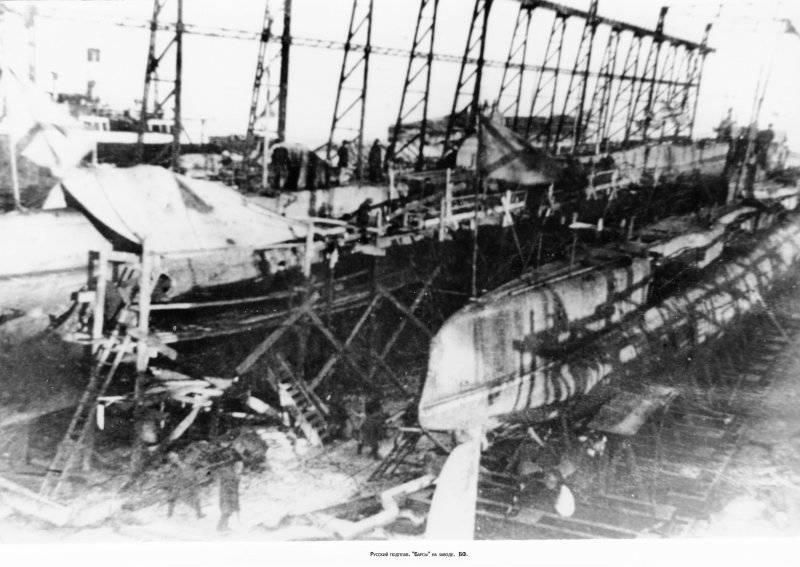 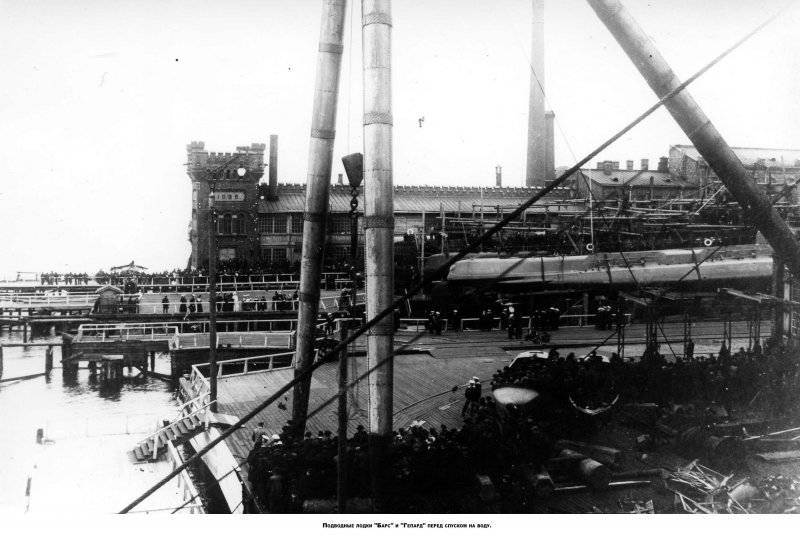 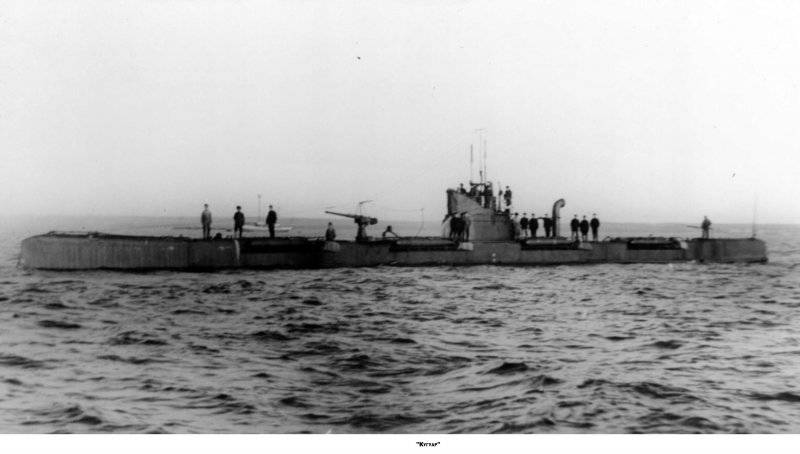 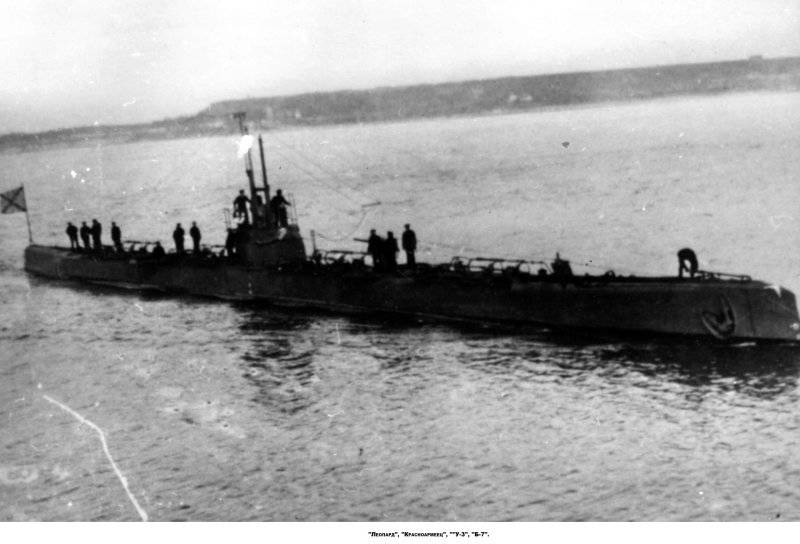 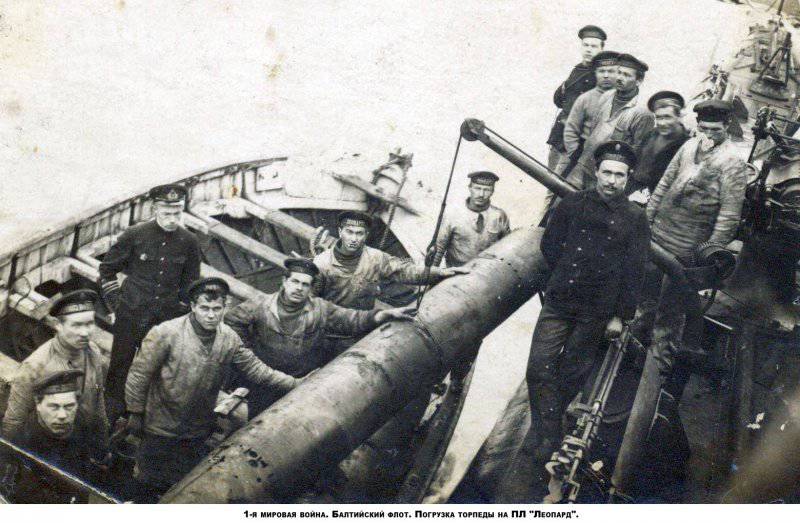 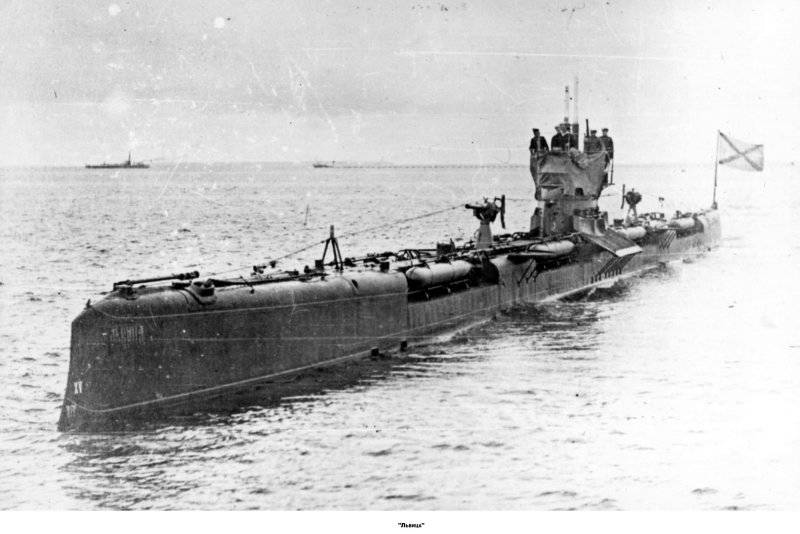 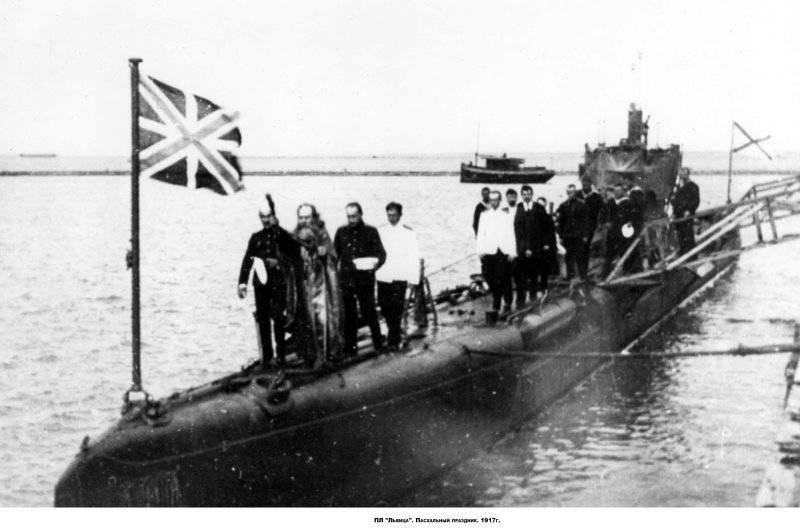 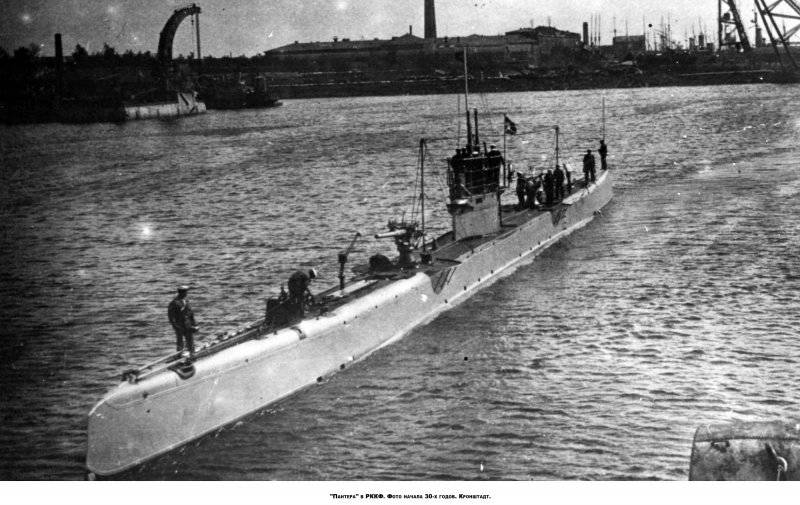 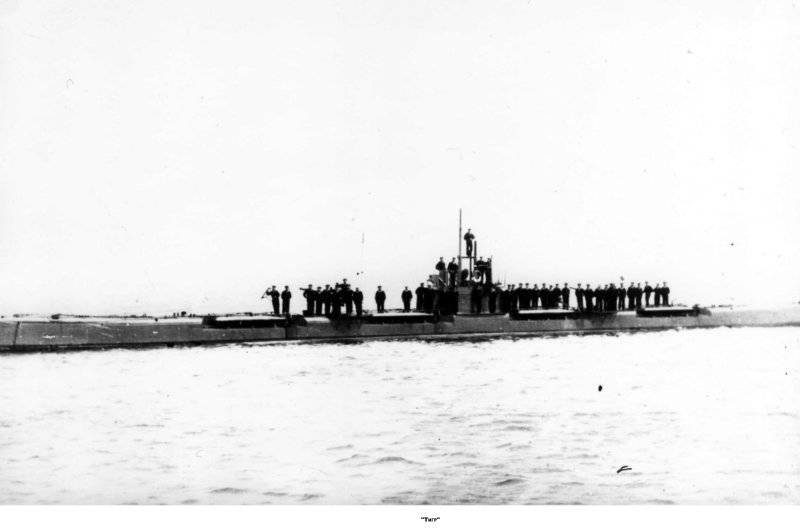 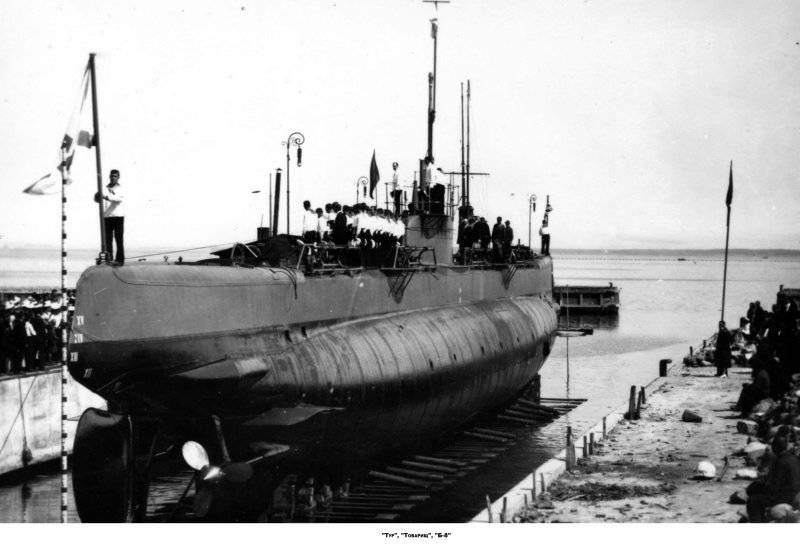 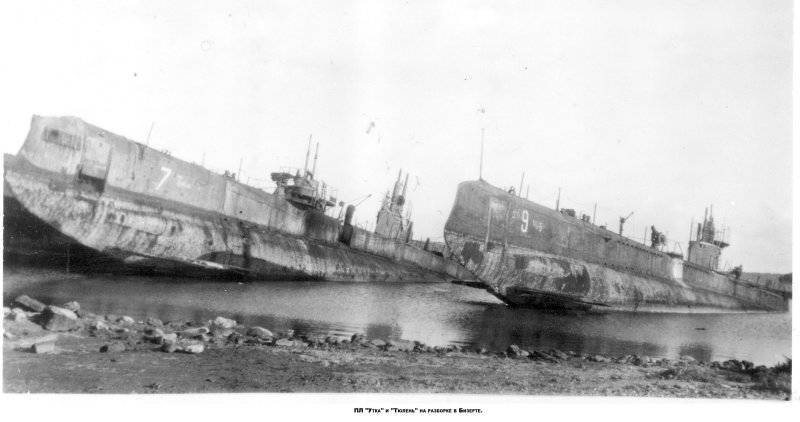 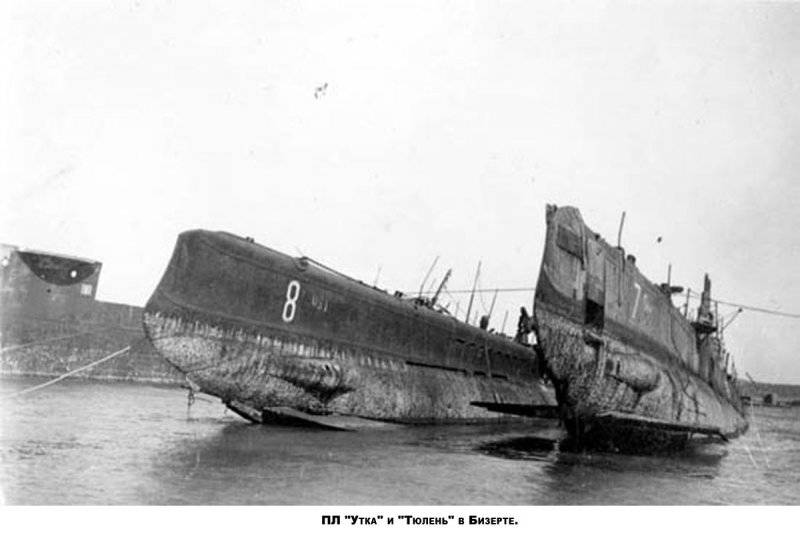 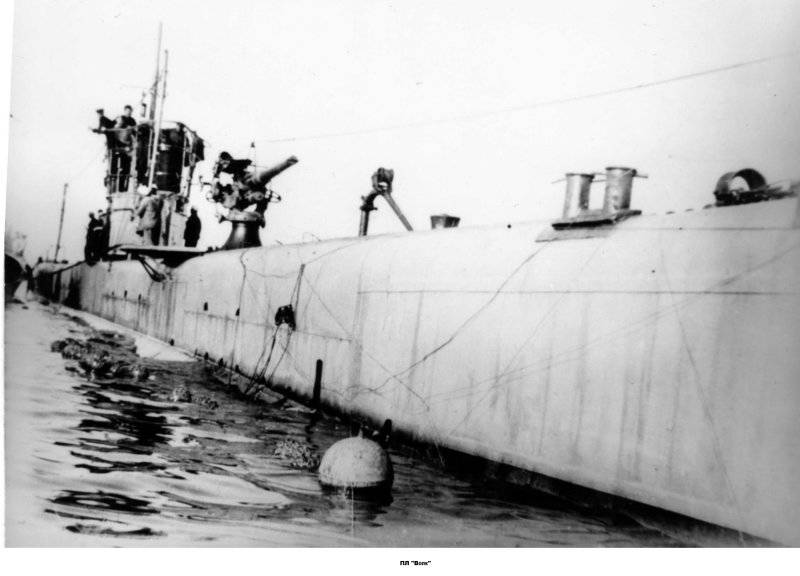 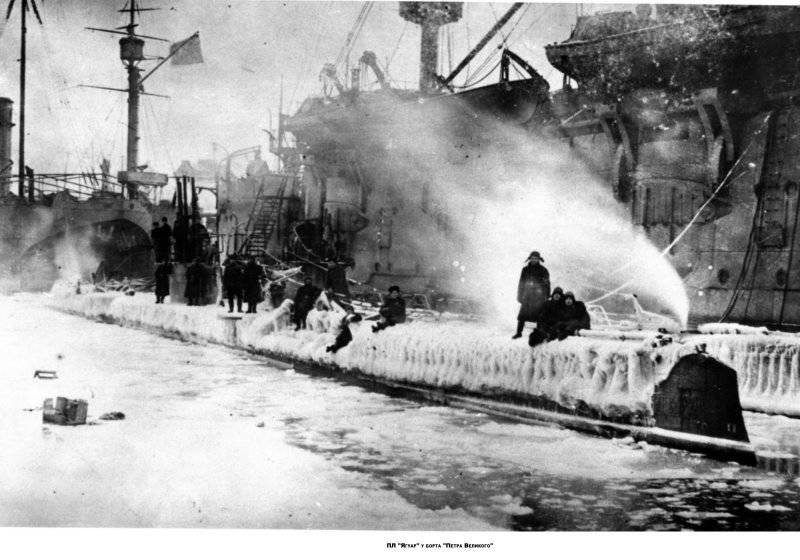 We are in Yandex Zen
"Svetlana". History of creation
"Walrus" submarines
5 comments
Information
Dear reader, to leave comments on the publication, you must to register.