November 22, 2012
15
Recently, Izhmash is surrounded by a large number of News, not always with a plus sign. Since mid-October, the plant fell into the center of the information war, which for the most part was deployed in the Udmurt mass media loyal to the republican leadership. It all started with a "rally", which was allegedly held on the territory of the plant by workers of one of the shops dissatisfied with their salary. Later, in the course of the audit, the Prosecutor's Office of the Urals Region denied the very fact of the rally, and the low wages of the shop workers were associated with the failure to fulfill plans and the unsatisfactory quality of the output. Against the background of news about the "distressed" situation at the enterprise, the upcoming competition for the post of general director, the news about the creation of a concern united by the Kalashnikov brand stands on the basis of Izhmash and Izhmekh. Mikhail Kalashnikov, Dmitry Rogozin and Vladimir Putin have already made a positive assessment of such a project.

Deputy Prime Minister Dmitry Rogozin spoke on Monday, 19 of November, to Russian President Vladimir Putin about the proposal to merge the Izhmash and Izhmekh enterprises into the Kalashnikov concern within the framework of the state corporation Russian Technologies. Dmitry Rogozin noted that, in his opinion, there is a very important step to be taken in terms of the concentration of industrial efforts, which would be similar to what was undertaken with the signing of the decree on the development of the activities of the Tactical Missile Weapons Corporation. Then the state concentrated in one place the intellectual, industrial, bench potential in such an important direction for the army as the development and production of combat cruise missiles, Rogozin said.

Now we are talking about one of the most difficult industries today, in which we work daily, it is a rifle and ammunition, said the deputy chairman of the government. Dmitry Rogozin recalled that one of the most important enterprises in this industry are Izhevsk plants "Izhmash" and "Izhmeh." Noting that both enterprises are “complex”, since for many years they have no orders from the Russian Ministry of Defense. This is due to the fact that in the warehouses of the Ministry of Defense has accumulated an excess amount of automatic weapons. At the same time, enterprises are trying to adapt to modern conditions and are actively developing segments of hunting, civil and sporting weapons. 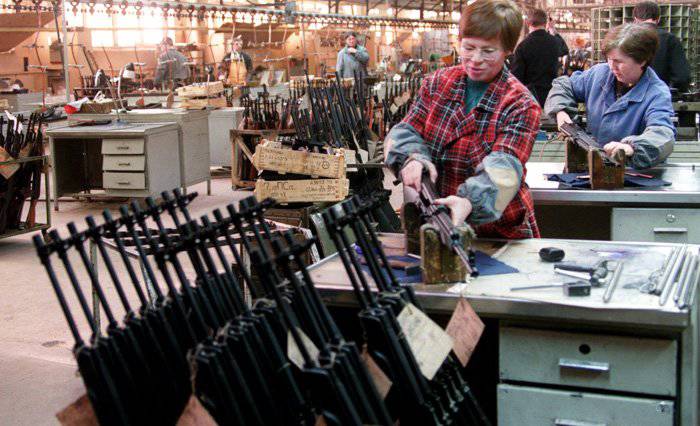 In order to concentrate all efforts and, most importantly, preserve the design potential in the capital of Udmurtia, Rogozin proposed to create a new concern within the framework of the Russian Technologies state corporation, united by the common brand Kalashnikov. The vice-premier appealed for help to the head of state, hoping to receive support in terms of uniting industry for this kind of corporation. At the exit, Dmitry Rogozin expects to get a modern Russian shooting plant specializing in serial production. Vladimir Putin approved such an initiative, Rogozin, adding that the result of such a merger should be an improvement in this area, and not a deterioration of it. The president also reminded that when implementing such decisions, many social issues arise that will need to be given close attention.

In turn, President Vladimir Putin called for much more active work on the issue of protecting the copyright of Russian arms companies. These attempts, according to Putin, are being made constantly, but it is necessary to act in this direction more consistently. In response, Dmitry Rogozin complained that while still working as an ambassador to NATO in Brussels, he often drew attention to a completely unique, one might even say barbaric attitude to those brands that today belong to Russia. In particular, we are talking about replicating Russian automatic weapons and other systems: without regard to our copyright and without Russia's demand. At the same time, Rogozin noted that our country is ready to begin a decisive struggle to protect the copyright of Russian gunsmiths in the international market.

The president also found another assignment for the deputy prime minister - to complete, together with the economic bloc of the government, a set of works on the formation of general pricing principles in the state defense order. Vladimir Putin noted that there is a lot of talk on this subject at present, there are also many problems, but there are no uniform principles and solutions on this issue. According to Rogozin, at present this situation is in the manual control mode, but there is every reason to believe that in the near future, before the end of 2012, the State Duma of the Russian Federation and the Federation Council will adopt the Federal Law "On State Defense Order". This law implies a much larger maneuver both for the contractor and for the customer in choosing the most appropriate government contract that would take into account the features of the products produced: both simpler and technologically complex. 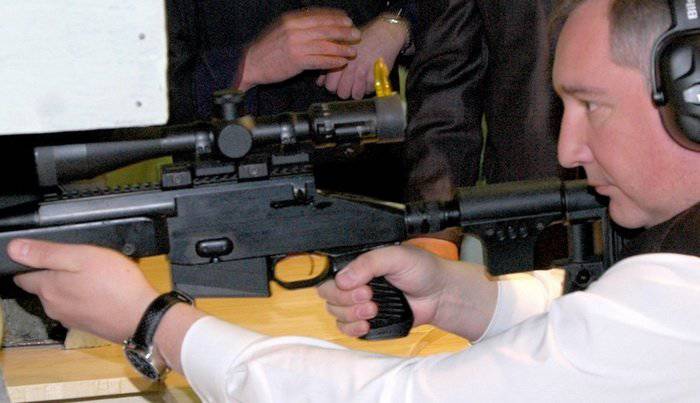 Returning to the theme of the association of Izhevsk arms factories under the Kalashnikov brand, it can be noted that Dmitry Rogozin spoke about this in early November. This thought came to him after he visited the famous defense enterprise TsNIItochmash located near Moscow. Then he noted that, with all due respect, Izhmash and Izhmeh are not brands, while Kalashnikov is a global brand. Also, Dmitry Rogozin noted that at present the production capacities of these Udmurt enterprises 2 are underutilized, periodically the enterprises have a problem with financing, there is a shortage of personnel. At the same time, both Izhmash and Izhmeh produce similar products.

Later on, 11 in November, Dmitry Rogozin, in his microblog on Twitter, wrote that legendary gunsmith designer Mikhail Kalashnikov agreed to use his name in the name of the concern created on the basis of two Izhevsk factories. The Deputy Prime Minister also noted that he personally congratulated Mikhail Timofeevich Kalashnikov on his 93 anniversary over the telephone, as part of a telephone conversation Kalashnikov supported the idea of ​​creating a concern under the Kalashnikov brand. Rogozin is confident that under such a flag in Izhevsk it will be possible to fully revive the production of modern small arms, which in its reliability and effectiveness will surpass modern Western designs.

Literally a few days later, on the pages of the newspaper “Izvestia”, material appeared in which it was reported that Mikhail Kalashnikov sent a letter to the President of Russia, in which he supported the idea of ​​unification, among other things, asking him to protect his name from all sorts of speculations, which Recently, obviously increased. In the letter, the legendary designer praised the state corporation Russian Technologies for saving Izhmash (reforms and anti-crisis measures at this enterprise began in the 2011 year). According to Mikhail Kalashnikov, the group of companies reorganized into NPO Izhmash JSC promptly settled debts to its workers, expanded the volume of foreign supplies and was able to raise the wages of workers. In the letter, he noted that it would be a great honor for him if the combined holding bears his name. Kalashnikov expressed confidence that the new concern could become the personification of the power of Russian weapons. 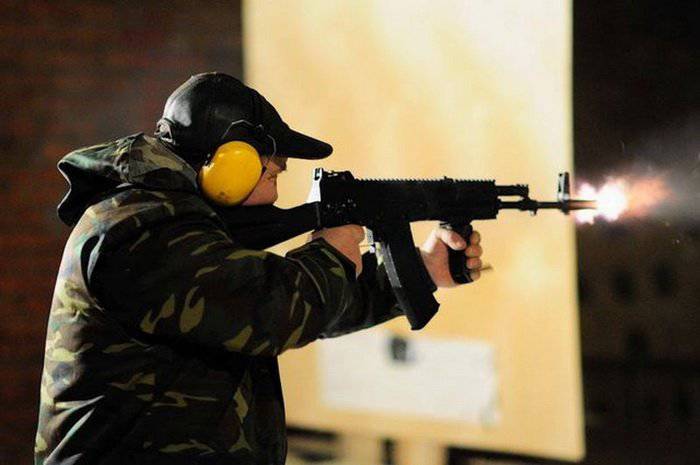 Izhevsk Machine Building Plant suffered a bankruptcy procedure as early as April 2012. For the world-famous enterprise, this was the only chance to survive in the prevailing conditions. When in the 2010 year, representatives of the crisis management appeared at the enterprise, sent there by Russian Technologies, the promissory notes of the Izhevsk plant were estimated at 13,7 billion rubles, and many workers did not receive their salaries for half a year.

At that time, it was planned to spend 7,5 billion rubles on the repayment of debts alone in case of subsidizing the enterprise, but the anti-crisis management of the enterprise went further and decided to conduct a technical bankruptcy procedure for the enterprise. After the assets of Izhmash were regrouped, the company managed to increase its revenue immediately by 40% compared to the 2010 year. Moreover, the company was able to conclude a new agreement on the supply of Saiga carbines to the USA, where this weapon received very high marks from local policemen. The volume of product shipments to the states for the year increased immediately by one and a half times. As a result of all the measures taken at the enterprise, it was possible to load high-tech equipment on 70% that was idle before.

According to the press service of the Izhmash enterprise, during the 8 months of 2012, Izhmash produced small arms by 11% more than in the full year 2011. At the end of 2012, the growth in the production of small arms, subject to plans, should be 56%. At the same time, the company, it seems, has paid off its debts, and the product sales markets have been expanded. Currently, Izhmash products are shipped to 27 countries of the world, including the USA, Germany, Great Britain, Italy, Canada, Norway, Thailand, and Kazakhstan. 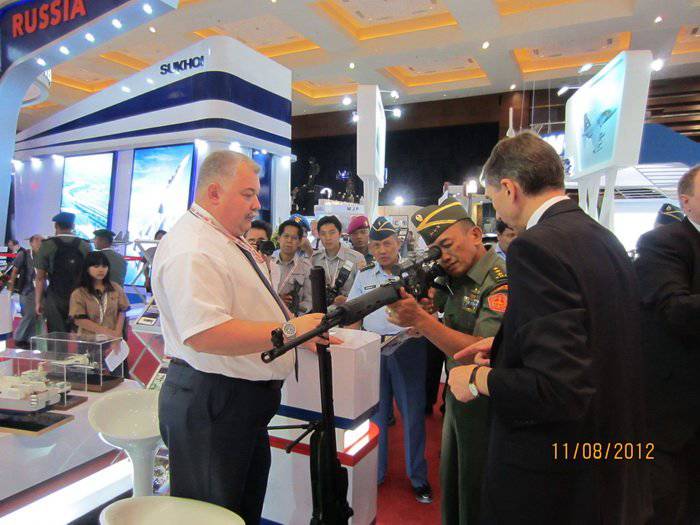