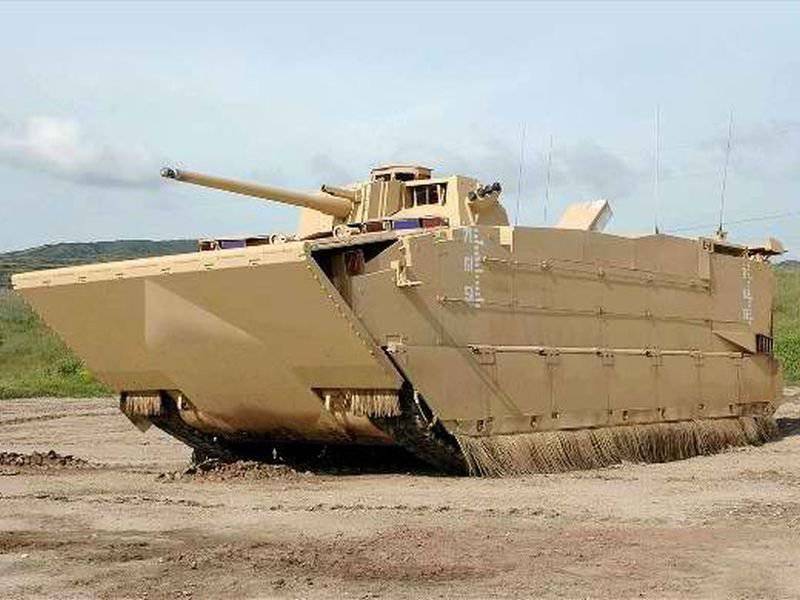 The project searches for the most appropriate modern combat floating equipment are being started based on the experience and preliminary technical requirements. Some companies engaged in the production of military equipment, have been engaged in the development of such equipment since the mid 1980-s. In the process of development, TTTs are selected for a new floating machine, models of the future machine are built with the help of computers, new technological and hardware solutions are being tested that will be included in the design of the machine, various experiments are being conducted. At the beginning of 1990-s, coordination between competing firms is carried out, the concept of the new BTR under the “AAAV” program and its use in the MP is being worked out, questions of the possibility of joint mass production are being worked out. From the middle of the 1990-ies, testing of TTT is carried out according to the contract, with the construction of prototypes of BTR and KSHM under the program "AAAV (C)". The first tests and elaboration of technical issues of the serial launch are carried out. At the beginning of the 2000-ies begins the construction of a small series of prototypes for the main tests. With 2006-2007, it was planned to mass production of the adopted model.

The start of the development of the EFV is the middle of the 1996 of the year. For the creation of three prototypes, General Dynamics has allocated almost 217 million dollars (in 2001, a new contract was signed to create 9 BF prototype EFV - the contract value is more than 700 million dollars). Following the plans of the military command, the 935 BTR and 78 KSHM were to be mass-produced. 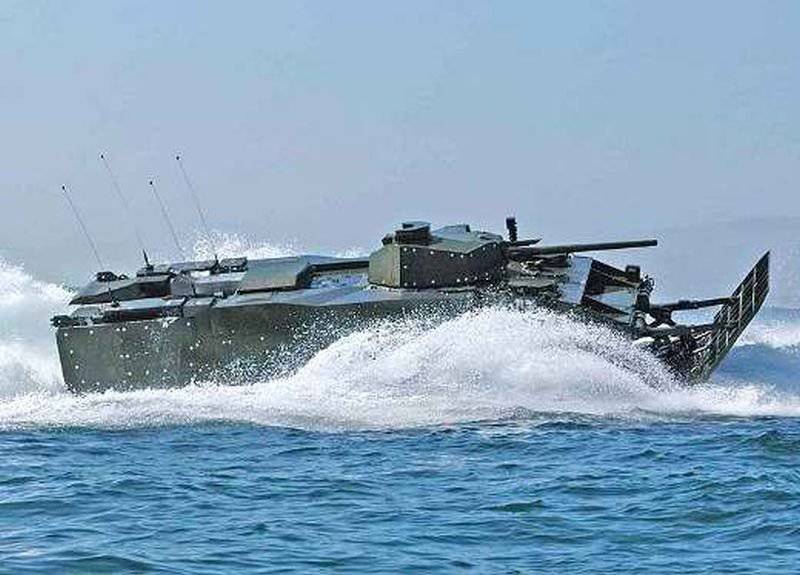 EFV device and construction
Armored personnel carrier is made on a tracked chassis, floating. The body is mainly made of aluminum alloys. Additionally, the detachment of the landing and combat are protected by armor of ceramic-composite materials. It provides protection for the crew and marines against 14.5mm caliber armor-piercing ammunition and shell fragments (up to 155mm). There is the possibility of installing mounted armor. The hull has a rather classical shape, straight sides, developed by NLD. The top of the case is flat, the tower part is shifted slightly forward. The landing hatch is made in the aft part, the hatches of the crew are in the forward part of the hull. To ensure high gliding, the bottom is profiled. 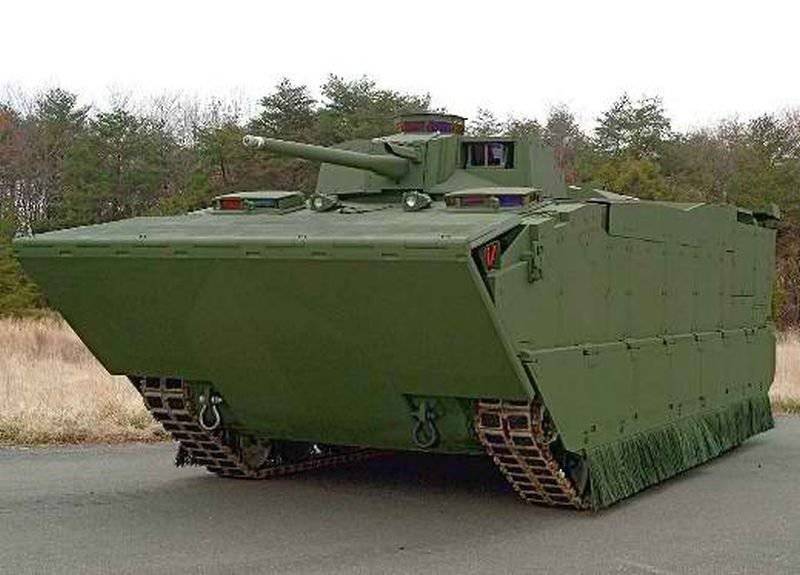 In the nose part is the transmission compartment. Transmission of mechanical type with automatic transmission, torque converters and transfer case, which provides the ability to work tracked and jet propulsion. Next comes the fighting compartment with the driver-mechanic on the left and the marines commander on the right, behind them is the tower part carrying the main armament with the gunner’s and commander’s places. The central part is reserved for the power compartment, with a diesel MTU 883, cooling system, ventilation and transmission units. Engine volume 27 liters, turbocharged. It has two modes of operation: normal for ground movement in 850 hp, and sea for driving on water in 2700 hp. When driving on water, the diesel delivers all the power to the water jets, with mandatory cooling with seawater. Water-jet propulsion units are installed in the rear part of the ship, water enters the propellers from the central part of the hull below. The nozzles of the propulsion units have dampers with which the movement on the water is controlled. The total thrust propulsion is equal to 10 tons. The aft part is occupied by the troop compartment for 16 equipped marines or for 2500 kilograms of cargo. The main entrance / exit to the troop compartment is located in the rear wall as a single oval-shaped hatch, folding down. The hatch in the open state acts as a ramp for unloading naval paratroopers or transported cargo. Fuel tanks are located in the middle upper part of the hull along the sides.

Chassis: seven support and three supporting skating rink, front leading skating rink on each side. Suspension independent hydropneumatic. The track is also made of aluminum alloys, fine-link. It is provided with rubberized hinge and tread. When moving through the water with the help of the suspension, the support rollers are set to the upper extreme position, the tracks are retracted into the allotted niches. This allows you to reduce the resistance when driving on water. To increase the speed characteristics in the marine mode, they lower the shields installed in the fore and aft of the hull. The stern shield in the upper position is on the roof of the hull. Tracked belts are covered with side folding shields to protect them. In the reverse position can serve as additional protection for the machine body. 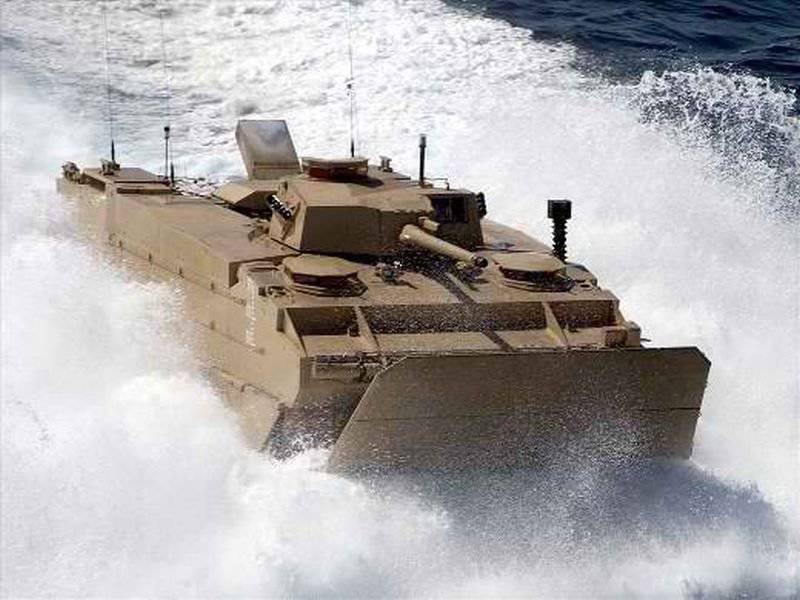 The main caliber of the BFR EFV is the automatic 30-mm gun "Bushmaster II", installed in the tower part. The gun is a modification of the Bushmaster 25-mm cannon, which is mounted on the Bradley M2. Feed guns tape-type ammunition 600 shots, of which 450 high-explosive shots and 150 shots armor-piercing-snapping. A machine gun of the 7.62 caliber mm M240, ammunition 2400 ammunition is paired with the gun. On the hull and the turret there are 32 grenade launchers with a smoke shot on the sides. The gun is stabilized in both planes. Vertical guidance angles allow the crew to fire at helicopter and UAV air objects.

The main and additional equipment BTR:
- equipment for the detection of laser radiation;
- Day and night sights for all crew members;
- overview infrared FLIR system;
- laser range finder for machine gunner;
- automatic MSA;
- navigation system? combined with GPS;
- communication systems for external / internal communication;
- BIUS, provided with overview and tactical displays;
- automatic fire extinguishing system;
- The system of protection of the crew and the Marines from the OMP, which includes air conditioning and cleaning;
- additional diesel and electric generator. 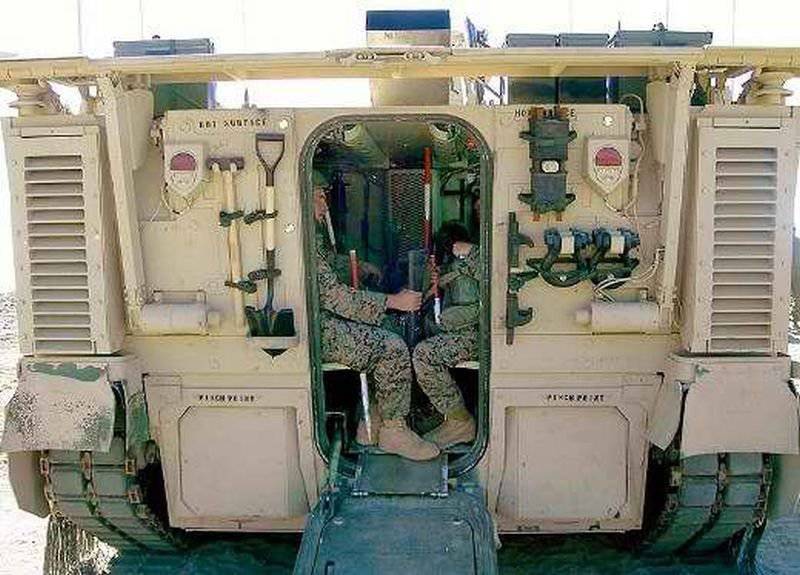 Differences KSHM from BTR:
- seven equipped workstations in the department of landing;
- additional systems and equipment;
- absence of the main caliber.

Fate EFV
The machine was created with great difficulties, both technical, economic and as a result of a political nature. Initially, the designers could not achieve the requirements for speed characteristics. Later, when the speed characteristics more or less approached the required ones, the problem of operational reliability arose.

The timing of the program was completely disrupted. There is great doubt that the KMP commanders in continuing to develop a floating expeditionary vehicle. In 2009, the Ministry of Defense decided to continue the development of the machine within the framework of the existing program.

In the 2011 year, after analytical calculations, the Ministry of Defense decides to stop the program. The total cost of development and mass production is estimated at 16 billion. At the time of stopping the program, at least 3 billions had already been spent on it. Analysts concluded that the mass production of this BTR could begin no earlier than 2015 with a significant increase in the total cost. Against the background of crisis and austerity, the “long-running” EFV program was doomed to shut down.

The ILC command, in dire need of a floating armored personnel carrier, will issue new TTTs to a combat amphibious vehicle until the end of 2012, which will be less demanding than TTTs on the EFV. Perhaps General Dynamics will present the updated EFV prototype according to the new requirements to the command of the MP corps.